Read The Boy Who Was Raised as a Dog Online

The Boy Who Was Raised as a Dog

BOOK: The Boy Who Was Raised as a Dog
>>DOWNLOAD HERE >>READ ONLINE NOW
ads 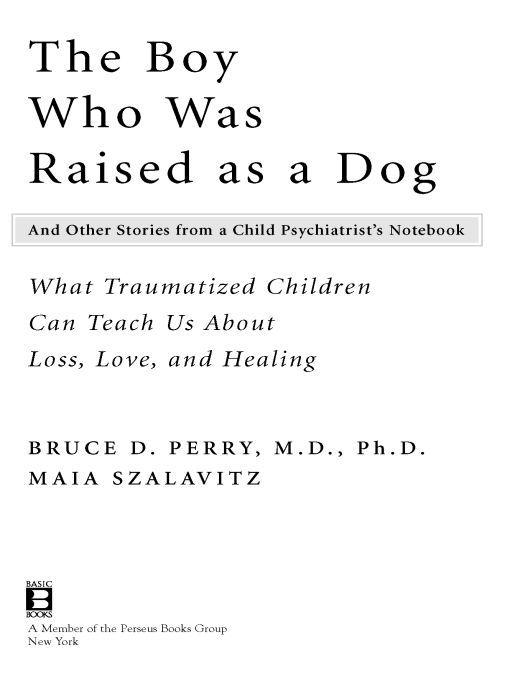 Table of Contents
Â
Praise
Title Page
Dedication
Author's Note
Introduction
Â
chapter 1 - Tina's World
chapter 2 - For Your Own Good
chapter 3 - Stairway to Heaven
chapter 4 - Skin Hunger
chapter 5 - The Coldest Heart
chapter 6 - The Boy Who Was Raised as a Dog
chapter 7 - Satanic Panic
chapter 8 - The Raven
chapter 9 - “Mom Is Lying. Mom Is Hurting Me. Please Call the Police.”
chapter 10 - The Kindness of Children
chapter 11 - Healing Communities
Â
Appendix
Acknowledgements
Notes
Index
Copyright Page
Praise for
The Boy Who Was Raised as a Dog
“I have never encountered a child advocate with a better mind, a bigger heart, or a more generous spirit than Bruce Perry. This book captures the essence of his insights and the heroism of his actions on behalf of children who have encountered the dark side of human experience.”
âJAMES GARBARINO, PH.D., author of
Lost Boys: Why Our Sons Turn Violent and How We Can Save Them
Â
“
The Boy Who Was Raised as a Dog
is Bruce Perry's finest achievement. . . . It gives us the opportunity to unlock the deepest mystery of our species: why some children turn out to be heroes and others to be predatory sociopaths. Anyone who wants to understand childhood trauma and its heartbreaking consequences must read this book.”
âANDREW VACHSS, best-selling author of
Mask Market
and founder and national advisory board member of PROTECT: The National Association to Protect Children
Â
“Filled with compassionate, caring stories by a wise healer and scientist, this book will appeal to all who are interested in understanding how children heal.”
âLYNN PONTON, M.D., author of
The Romance of Risk
Â
“I have admired and respected Bruce Perry for over a decade. His commitment to helping young children raised in chaotic and abusive environments is nothing short of remarkable. This book is an important tool in helping us understand the critical impact of early experiences in children's lives, and it shows us how to help those who have been damaged by neglect. Anyone who deals with vulnerable or troubled youthâfrom social workers to judges, daycare workers to high school teachers, parents to politiciansâcan gain important perspectives from this book.”âROB REINER
“In this harrowing but profoundly humane book, Perry and Szalavitz provide an all too timely, utterly engrossing account of traumatized children's lives. . . . Once I opened it, I could not put it down.”
âSARAH BLAFFER HRDY, author of
Mother Nature: Maternal Instincts and How They Shape the Human Species
Â
“For many years, Bruce Perry's work has been deserving of our highest praise. This book is his crowning achievement, the ultimate combination of science and humanity.”
âJOEL A. DVOSKIN, PH.D., ABPP, University of Arizona College of Medicine, and President, American Psychology-Law Society 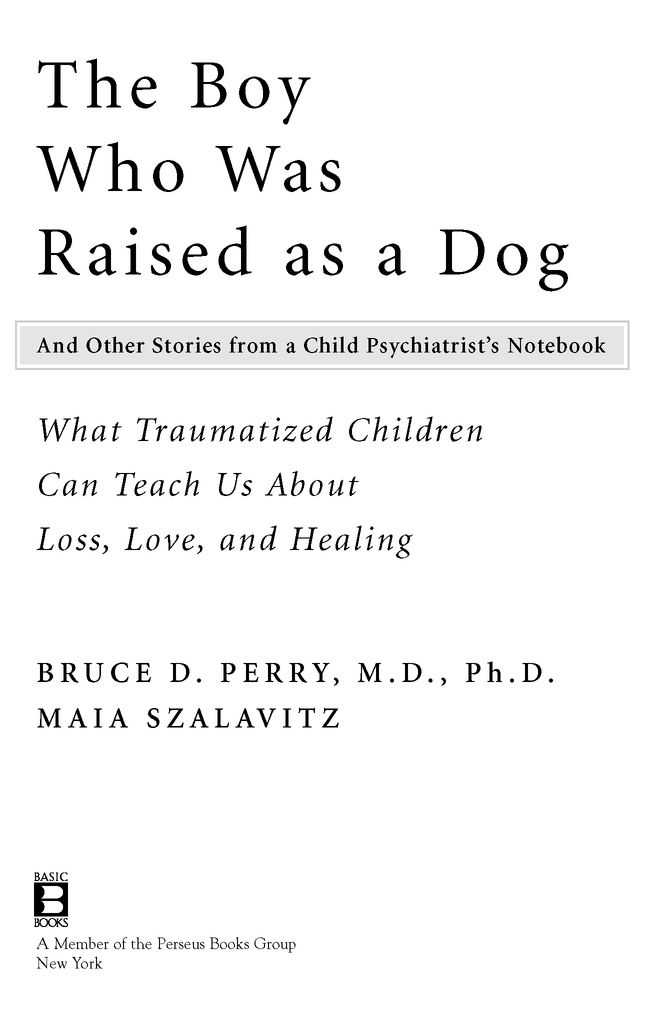 On Tenterhooks by Greever Williams
Sheets by Ruby, Helen
Vegas to Varanasi (Fortytude Series Book 1) by Hickman, Shelly
Omega Force 7: Redemption by Joshua Dalzelle
Half Lost by Sally Green
When Only a Rake Will Do by Jennifer McNare
Bloody Mary by Thomas, Ricki
Gawain by Gwen Rowley
Beowulf's Children by Niven, Larry, Pournelle, Jerry, Barnes, Steven
The Hand of God by James Craig