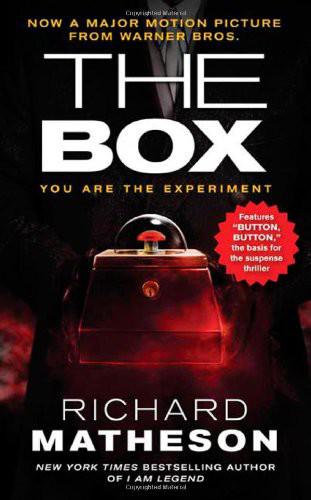 Journal of the Gun Years

The Memoirs of Wild Bill Hickok

The Path: A New Look at Reality

A Stir of Echoes

What Dreams May Come

NOTE: If you purchased this book without a cover, you should be aware that this book is stolen property. It was reported as “unsold and destroyed” to the publisher, and neither the author nor the publisher has received any payment for this “stripped book.”

This is a work of fiction. All of the characters and events portrayed in the stories in this collection are either products of the author’s imagination or are used fictitiously.

Previously published by Tor Books under the title
Button, Button
:

Tor® is a registered trademark of Tom Doherty Associates, LLC.

With love to my son Richard, for protecting
my life in every way

Girl of My Dreams

A Flourish of Strumpets

No Such Thing as a Vampire

’Tis the Season to Be Jelly

A question often asked of writers is “Where did you get the idea for that story?” It is a question we can usually answer easily. I can answer it with regard to “Button, Button” because the idea came from my wife although, at the time, she had no idea she was doing it. Neither did I. That came later.

I will not tell you the idea prior to your reading of the story except to say that the idea was mentioned in a college psychology class my wife took. One idea in that class that I
can
mention is the following: To contribute importantly to world peace, would you walk down New York’s Broadway—naked?

The idea, which resulted in my writing of “Button, Button” was of a similar nature: a sacrifice of human dignity in exchange for a specific goal—in this case nothing anywhere near as worthy as world peace.

The package
was lying by the front door—a cube-shaped carton sealed with tape, the name and address printed by hand:
MR. AND MRS. ARTHUR LEWIS, 217 E. 37TH STREET, NEW YORK, NEW YORK
10016. Norma picked it up, unlocked the door, and went into the apartment. It was just getting dark.

After she put the lamb chops in the broiler, she made herself a drink and sat down to open the package.

Inside the carton was a push-button unit fastened to a small wooden box. A glass dome covered the button. Norma tried to lift it off, but it was locked in place. She turned the unit over and saw a folded piece of paper Scotch-taped to the bottom of the box. She pulled it off: “Mr. Steward will call on you at eight p.m.”

Norma put the button unit beside her on the couch.
She sipped the drink and reread the typed note, smiling.

A few moments later, she went back into the kitchen to make the salad.

T
he doorbell rang at eight o’clock. “I’ll get it,” Norma called from the kitchen. Arthur was in the living room, reading.

There was a small man in the hallway. He removed his hat as Norma opened the door. “Mrs. Lewis?” he inquired politely.

“Oh, yes.” Norma repressed a smile. She was sure now it was a sales pitch.

“I’m rather busy,” Norma said. “I’ll get you your watchamacallit, though.” She started to turn.

Norma turned back. Mr. Steward’s tone had been offensive. “No, I don’t think so,” she said.

“It could prove very valuable,” he told her.

Norma frowned. She didn’t like his attitude. “What are you trying to sell?” she asked.

“I’m not selling anything,” he answered.

Arthur came out of the living room. “Something wrong?”

“Oh, the . . .” Arthur pointed toward the living room and smiled. “What is that gadget, anyway?”

“It won’t take long to explain,” replied Mr. Steward. “May I come in?”

Arthur looked at Norma. “Up to you,” she said.

They went into the living room and Mr. Steward sat in Norma’s chair. He reached into an inside coat pocket and withdrew a small sealed envelope. “Inside here is a key to the bell-unit dome,” he said. He set the envelope on the chairside table. “The bell is connected to our office.”

“What’s it for?” asked Arthur.

“If you push the button,” Mr. Steward told him, “somewhere in the world, someone you don’t know will die. In return for which you will receive a payment of fifty thousand dollars.”

Norma stared at the small man. He was smiling.

“What are you talking about?” Arthur asked him.

“Is this a practical joke?” asked Arthur.

“Not at all. The offer is completely genuine.”

“Whom do you represent?” demanded Norma.

Mr. Steward looked embarrassed. “I’m afraid I’m not at liberty to tell you that,” he said. “However, I assure you the organization is of international scope.”

“And take your button unit with you.”

“Are you sure you wouldn’t care to think about it for a day or so?”

Arthur picked up the button unit and the envelope and thrust them into Mr. Steward’s hands. He walked into the hall and pulled open the door.

“I’ll leave my card,” said Mr. Steward. He placed it on the table by the door.

When he was gone, Arthur tore it in half and tossed the pieces onto the table. “God!” he said.

Norma was still sitting on the sofa. “What do you think it was?” she asked.

She tried to smile but couldn’t. “Aren’t you curious at all?”

After Arthur returned to his book, Norma went back to the kitchen and finished washing the dishes.

Book of Shadows by Marc Olden
Manly Wade Wellman - Novel 1959 by The Dark Destroyers (v1.1)
A Pirate's Bounty by Knight, Eliza
Mastered by Her Mates (Interstellar Bride Book 0) by Grace Goodwin
In the Name of a Killer by Brian Freemantle
Oblivion: Surrender by Cristina Salinas
Last Nocturne by Marjorie Eccles
Dance With Me, Baby: A Yeah, Baby Novella by Fiona Davenport
Wicca by Scott Cunningham
The Secret Prince by Violet Haberdasher