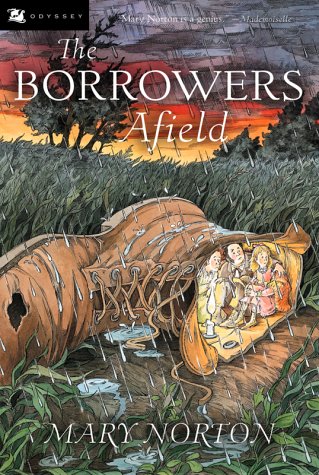 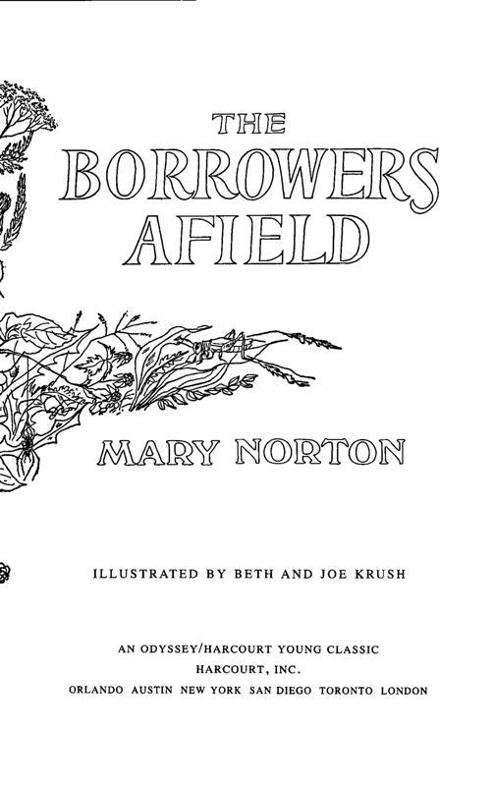 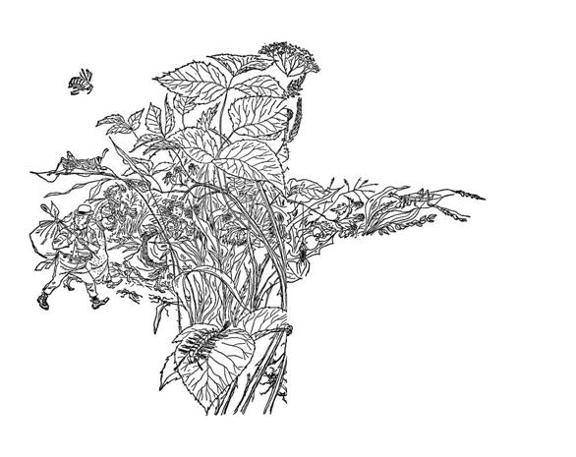 All rights reserved. No part of this publication may be reproduced
or transmitted in any form or by any means, electronic or mechanical,
including photocopy, recording, or any information storage and retrieval
system, without permission in writing from the publisher.

Requests for permission to make copies of any part of the work should be
mailed to the following address: Permissions Department, Harcourt, Inc.,
6277 Sea Harbor Drive, Orlando, Florida 32887-6777.

I
T WAS
K
ATE
who, long after she was grown up, completed the story of the borrowers. She wrote it all out, many years later, for her four children, and compiled it as you compile a case-history or a biographical novel from all kinds of evidence—things she remembered, things she had been told and one or two things, we had better confess it, at which she just guessed. The most remarkable piece of evidence was a miniature Victorian notebook with gilt-edged pages, discovered by Kate in a game-keeper's cottage on the Studdington estate near Leighton Buzzard, Bedfordshire.

Old Tom Goodenough, the game-keeper, had never wanted the story put in writing but as he had been dead now for so many years and as Kate's children were so very much alive, she thought perhaps that wherever he might be (and with a name like Goodenough it was bound to be Heaven) he would have overcome this kind of prejudice and would by now, perhaps, forgive her and understand. Anyway, Kate, after some thought, decided to take the risk.

When Kate had been a child herself and was living with her parents in London, an old lady shared their home (she was, I think, some kind of relation): her name was Mrs. May. And it was Mrs. May, on those long winter evenings beside the fire when she was teaching Kate to crochet, who had first told Kate about the borrowers.

At the time, Kate never doubted their existence—a race of tiny creatures, as like to humans as makes no matter, who live their secret lives under the floors and behind the wainscots of certain quiet old houses. It was only later that she began to wonder (and how wrong she was she very soon found out: there were still to be, had she only known it, developments more unlooked for and extraordinary than any Mrs. May had dreamed of).

The original story had smacked a little of hearsay: Mrs. May admitted—in fact, had been at some pains to convince Kate—that she, Mrs. May, had never actually seen a borrower herself; any knowledge of such beings she had gained at second-hand from her younger brother, who, she admitted, was a little boy with not only a vivid imagination but well known to be a tease. So there you were, Kate decided—thinking it over afterwards—you could take it or leave it.

And, truth to tell, in the year or so which followed she tended rather to leave it: the story of the borrowers became pushed away in the back of Kate's mind with other childish fantasies. During this year she changed her school, made new friends, acquired a dog, took up skating and learned to ride a bicycle. And there was no thought of borrowers in Kate's mind (nor did she notice the undercurrent of excitement in Mrs. May's usually calm voice) when, one morning at breakfast in early spring, Mrs. May passed a letter across the table, saying, "This will interest you, Kate, I think."

It didn't interest Kate a bit (she was about eleven years old at the time): she read it through twice in a bewildered kind of way but could make neither head nor tail of it. It was a lawyer's letter from a firm called Jobson, Thring, Beguid and Beguid. Not only was it full of long words like "beneficiary" and "disentailment" but even the medium-sized words were arranged in such a manner that, to Kate, they made no sense at all. (What for instance could "vacant possession" mean? However much you thought about it, it could only describe a state of affairs which was manifestly quite impossible.) Names there were in plenty—Studdington, Goodenough, Amberforce, Pocklinton—and quite a family of people who spelled their name "deceased" with a small "d."

"Thank you very much," Kate had said politely, passing it back.

"I thought, perhaps," said Mrs. May (and her cheeks, Kate noticed, seemed slightly flushed as though with shyness), "you might like to go down with me."

"Go down where?" asked Kate, in her vaguest manner.

"My dear Kate," exclaimed Mrs. May, "what was the point of showing you the letter? To Leighton Buzzard, of course."

Leighton Buzzard? Years afterwards, when Kate described this scene to her children, she would tell them how, at these words, her heart began to thump long before her mind took in their meaning. Leighton Buzzard ... she knew the name, of course: the name of an English country town ... somewhere in Bedfordshire, wasn't it?

"Where Great Aunt Sophy's house was," said Mrs. May, prompting her. "Where my brother used to say he saw the borrowers." And before Kate could get back her breath she went on, in a matter-of-fact voice, "I have been left a little cottage, part of the Studdington estate, and"—her color deepened as though what she was about to say now might sound slightly incredible—"three hundred and fifty-five pounds. Enough," she added, in happy wonderment, "to do it up."

Kate was silent. She stared at Mrs. May, her clasped hands pressed against her middle as though to still the beating of her heart.

"Could we see the house?" she said at last, a kind of croak in her voice.

"Oh, that house? Firbank Hall, it was called." Mrs. May seemed a little taken aback. "I don't know. We could ask, perhaps; it depends of course on whoever is living there now." 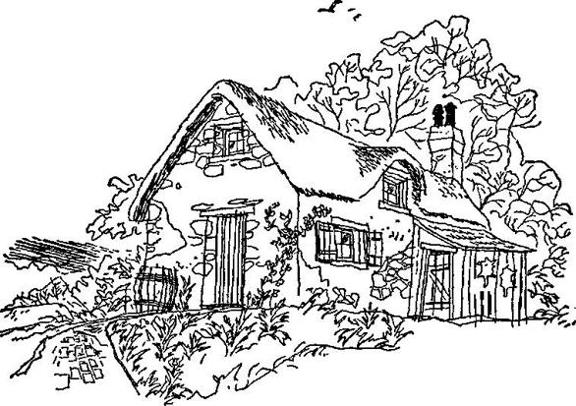 "I mean," Kate went on, with controlled eagerness, "even if we couldn't go inside, you could show me the grating, and Arrietty's bank; and even if they opened the front door only ever so little, you could show me where the clock was. You could kind of point with your finger, quickly—" And, as Mrs. May still seemed to hesitate, Kate added suddenly on a note of anguish, "You did believe in them, didn't you? Or was it"—her voice faltered—"only a story?"

"And what if it were only a story?" said Mrs. May quickly, "so long as it was a good story? Keep your sense of wonder, child, and don't be so literal. Anything we haven't experienced for ourselves sounds like a story. All we can ever do is sift the evidence."

Sift the evidence? There was, Kate realized, calming down a little, a fair amount of that. Even before Mrs. May had spoken of such creatures, Kate had suspected their existence. How else to explain the steady, but inexplicable, disappearance of certain small objects about the house?

Not only safety pins, needles, pencils, blotting paper, match-boxes and those sorts of things. But, even in Kate's short life, she had noticed that if you did not use a drawer for any length of time you would never find it quite as you had left it: something was always missing—your best handkerchief, your only bodkin, your carnelian heart, your lucky sixpence. "But I
know
I put it in this drawer"—how often had she said these words herself, and how often had she heard them said? As for attics—! "I am absolutely certain," Kate's mother had wailed only last week, on her knees before an open trunk searching vainly for a pair of shoe buckles, "that I put them in this box with the ostrich-fan. They were wrapped in a piece of black wadding and I slipped them here, just below the handle...." And the same thing with writing-desks, sewing baskets, button-boxes. There was never as much tea next day as you had seen in the caddy the evening before. Nor rice, for that matter, nor lump sugar. Yes, Kate decided, there was evidence, if only she knew how to sift it.

"I suppose," she remarked thoughtfully, as she began to fold up her napkin, "some houses are more apt to have them than others." 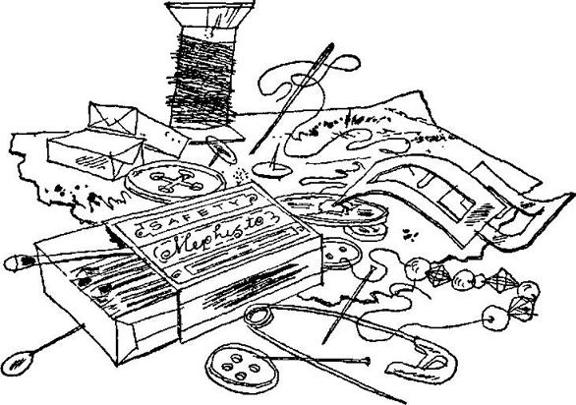 "Some houses," said Mrs. May, "do not have them at all. And according to my brother," she went on, "it's the tidier houses, oddly enough, which attract them most. Borrowers, he used to say, are nervous people; they must know where things are kept and what each human being is likely to be doing at any hour of the day. In untidy, noisy, badly-run houses, oddly enough, you can leave your belongings about with impunity—as far as borrowers are concerned, I mean." And she gave a short laugh.

"Could borrowers live out of doors?" asked Kate suddenly.

"Not easily, no," said Mrs. May. "They need human beings; they live by the same things human beings live by."

"I was thinking," went on Kate, "about Pod and Homily and little Arrietty. I mean—when they were smoked out from under the floor, how do you think they managed?"

"Do you think," asked Kate, "that Arrietty did become the last living borrower? Like your brother said she would?"

"Yes, he said that, didn't he—the last of her race? I sincerely hope not. It was unkind of him," Mrs. May added reflectively.

"I wonder, though, how they got across those fields? Do you think they ever did find the badger's set?"

"We can't tell. I told you about the pillow case incident—when I took all the doll-house furniture up there in a pillow case?"

"And you smelled something cooking? But that doesn't say our family ever got there—Pod and Homily and Arrietty. The cousins lived in the badger's set too, didn't they—the Hendrearys? It might have been their cooking."

Kate was silent awhile, lost in reflection; suddenly her whole face lit up and she swiveled round in her chair.

"If we do go—" she cried (and there was an awed look in her eyes as though vouchsafed by some glorious vision), "where shall we stay? In an
INN?
"

season avatars 01 - seasons beginnings by almazan, sandra ulbrich
Fever Quest: A Clean Historical Mystery set in England and India (The Isabella Rockwell Trilogy Book 2) by Hannah Parry
CATCH (The Billionaire's Rules, Book 14) by Kelly Favor
The Boys Are Back in Town by Christopher Golden
Avert by Viola Grace
I'll Be Seeing You by Darlene Kuncytes
The Twelve Dates of Christmas by Catherine Hapka
Scoring by Mia Watts
The Cyber Chronicles V - Overlord by T C Southwell
Some Lie and Some Die by Ruth Rendell