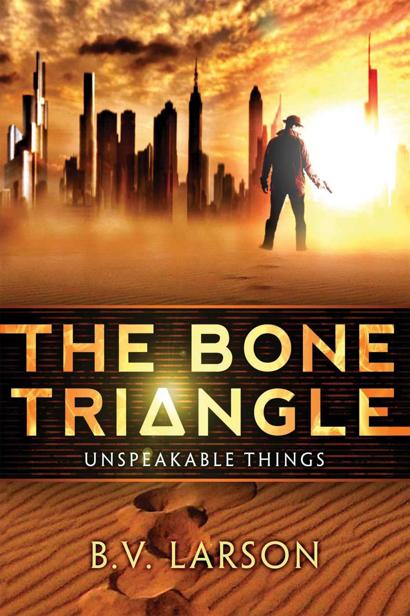 BOOKS BY
B. V. LARSON

Text copyright © 2012 B. V. Larson
No part of this book may be reproduced, or stored in a retrieval system, or transmitted in any form or by any means, electronic, mechanical, photocopying, recording, or otherwise, without express written permission of the publisher.

To Dan and Nancy, for all their hard work

The first assassin came to my house on a moonless night in June. I heard a cracking sound that evening, followed by a tinkling shower of broken glass. I investigated the kitchen and discovered a woman breaking in through a window—a woman with long black hair and matching fingernails.

My house isn’t a typical tract house. The place is two stories high—three if you count the extensive basement under the kitchen. It was unusual for houses in Nevada to have big basements, but then the people who’d built my home hadn’t been normal. All told, the walls of the house enclosed a space that measured more than ten thousand square feet. In fact, I would classify it as a small, run-down mansion.

Every inch had once been full of tasteful furniture, but I’d fallen on hard economic times lately and sold most of it. The interior still displayed expensive finishes. Carved stone pillars, polished marble tiles, and elaborate lighting fixtures
were everywhere. The ceilings were vaulted, and at the top of each room a lonely fan spun.

The assassin who crawled into my window wasn’t exactly human, but she was a pretty close approximation and would pass a casual inspection. She gave away her alien nature when she crouched in response to my challenging shout. Crouching required that she bend her knees, and the joints angled the wrong way. Her kneecaps pointed behind her, rather than forward. Her flowing taffeta dress had probably covered this while she traveled the city, but in the excitement of combat, she’d forgotten to fake it and went into a feral, animal-like stance. She didn’t hiss or growl, but she didn’t have to. Those backward knees, like the legs of a cat, were disturbing enough all by themselves.

The cat-lady hopped up onto the center island, and we regarded one another.

“Meng sent you, didn’t she?” I demanded of the thing.

She made no intelligible response. I hadn’t expected her to be in the mood for conversation, but I thought I’d give it a try. I doubted she could even speak English, and my mind was already working on the answer to my own question. If she couldn’t speak, I calculated, this immediately suggested Dr. Meng’s involvement. Meng had the power to cloud the minds of other beings, and language barriers didn’t stop her. More importantly, she hated me.

I reached for the light switch, flipping it up. Apparently, the woman on my countertop didn’t like bright light. She flipped the switch down again just by looking at it. Then more objects around the room began to move by themselves, while the cat-lady, whom I’d now upgraded in my mind to the rank of cat-witch, leaned back her head and grimaced in concentration.

My enemies knew very well by now that I was immune to direct attacks using mental energy or tricks of physics, so this assassin took a unique approach. She
threw
things at me, apparently with her mind. This might not sound too dangerous, but my home has a very large kitchen and the previous tenants had collected an unusual number of knives. These came off magnetic racks and lifted themselves out of drawers, which popped open at a glance from the crouching, two-legged cat-freak that stalked me.

My kitchen countertops were made of onyx, which was lit from below. Usually, the countertops provided the kitchen with a beautiful, stylish look, but tonight they gave the assassin an even more menacing aspect as she crouched atop them and willed objects to rain in my direction. She resembled a demon in the ghostly light, standing up there on her oddly posed legs.

I ducked a few knives and a spinning wok before I was able to draw my gun. I lifted it to aim at her, but the coffee machine twirled toward me and knocked it away. Java beans splashed the walls and rattled as they fell to the floor in a spiraling shower. In the dark, I wasn’t even sure where my gun had landed.

A moment later, a boning knife grazed my shoulder, giving me a nasty slash. Finding myself unarmed and facing a lot of airborne cutlery, I retreated into the adjacent living room.

They call me a rogue for good reasons. Rogues were wanderers with minor powers. We could do things other people couldn’t. My kind is known for our minor powers, our mobility, and our general sneakiness. Those with more impressive powers tended to sit in their domains, never daring to come out and play. They preferred to send minions like this hostile visitor.

I thought of Meng again as I ran from the assassin. How could I not? After our last encounter, I’d always suspected she would recover and return to the game in a bad mood. After all, I’d almost killed her inside her own domain several months ago, which had been both frightening and humiliating to someone of her status.

The cat-lady made a few choice sounds, calling after me. They reminded me of burbling snarls. I had no doubt that she was calling me a coward and worse things. This didn’t bother me. I reached out to a nearby door and threw it shut, letting it slam. Then I padded to stand at a corner with a metal lamp in my hand. It was an unwieldy weapon, but it was handy. I waited there, hoping she would assume I was running and hiding in one of the many rooms. It was time for her to seek.

The trick worked surprisingly well. She hopped down from the center island and came after me. I could tell by the sound of her feet she wasn’t wearing shoes. Her feet didn’t produce the soft sound a human’s should have. What I heard was more like the slap of a predator’s paws. I vaguely wondered what her legs looked like. I wouldn’t have been surprised to find fur, claws, and leathery footpads.

The moment she poked her nose around the corner, I bashed her with the lamp. I’ll admit it wasn’t chivalrous, but I wasn’t the one chasing her around her house, in her world.

My strike elicited a new, angry noise. It was a sort of growling cough, the heavy sound a sabertooth might have made in millennia past. The noise was distinctly alien, and it made my neck crawl with dread.

Steeling myself, I came around the corner, lifting the lamp for another blow. There she was, lying on the floor.

“I’ll let you run, if you—” I began, stupidly trying to be a nice guy.

Suddenly, the lamp in my hands twisted with violent force, crashing down on my skull. It felt as if a powerful hand had grabbed the top of it and levered it downward. I staggered, stunned, and felt the lamp shift in my grip, going for another strike. I twisted my head out of the way instinctively and took the second blow in the shoulder. I stumbled and threw the lamp behind me.

Sensing I was weak, she came in for the kill. I lunged for her, reaching for her throat. She did the same, eyes intense in the half-light of my living room. I saw then that her pupils were vertical slits, like those of a cat or a snake. She gripped my neck, and I gripped hers. We both squeezed. I was shocked by her strength. Apparently, females from her world were no pushovers.

While we struggled, I half expected more flying objects to come crashing down on my head. Fortunately, it seemed that she required some level of concentration to perform this trick. At this moment, all she could do was squeeze my throat.