Read The Big Whatever Online 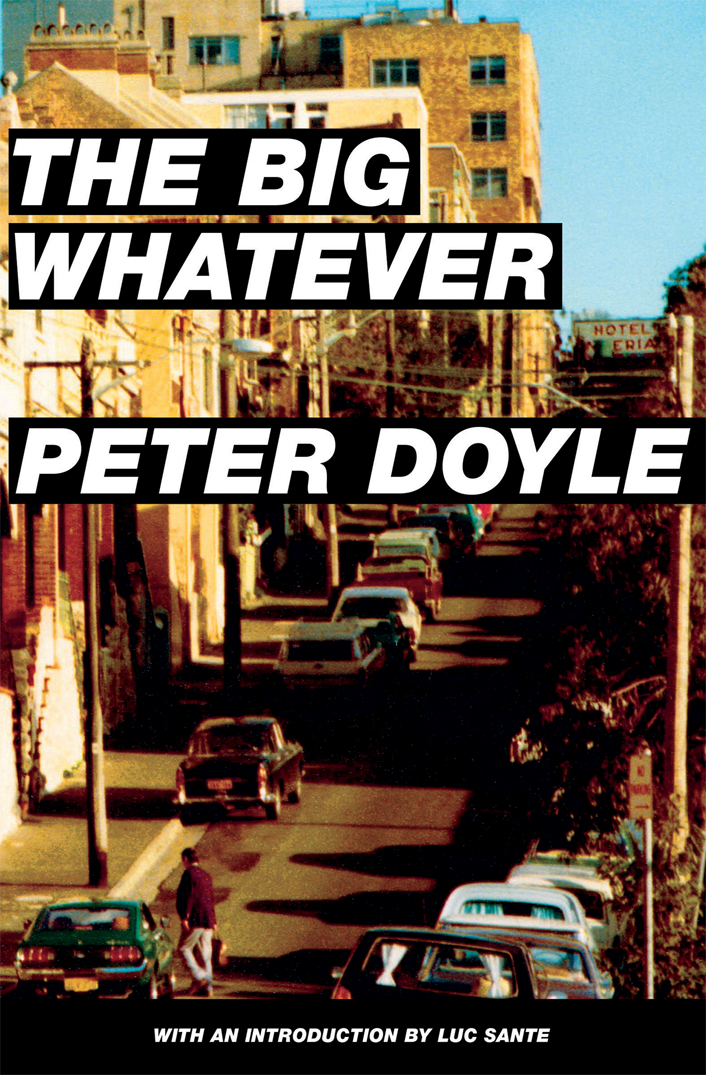 PETER DOYLE
was born in Maroubra, in Sydney's eastern suburbs. He worked as a taxi driver, musician, and teacher before writing his first book,
Get Rich Quick
, which won the Ned Kelly Award for Best First Crime Fiction. Two more novels followed,
Amaze Your Friends
and
The Devil's Jump
, as did two more Ned Kelly Awards.

No one knows Sydney (especially its murky past) quite like Peter Doyle. He combed through the archives of the Sydney police department to put together a highly acclaimed and long-running exhibition of crime-scene photographs and mug shots, as well as an accompanying book,
City of Shadows: Sydney Police Photographs 1912-1948
, and recently curated
Pulp Confidential
, an exhibition of Australian pulp publishing, at the State Library of NSW. Doyle teaches writing at Macquarie University.

LUC SANTE
is the author of numerous books, including
Low Life: Lures and Snares of Old New York
and
The Other Paris: The People's City
. He has also contributed introductions to crime novels and memoirs by Georges Simenon, Richard Stark, and Charles Willeford. 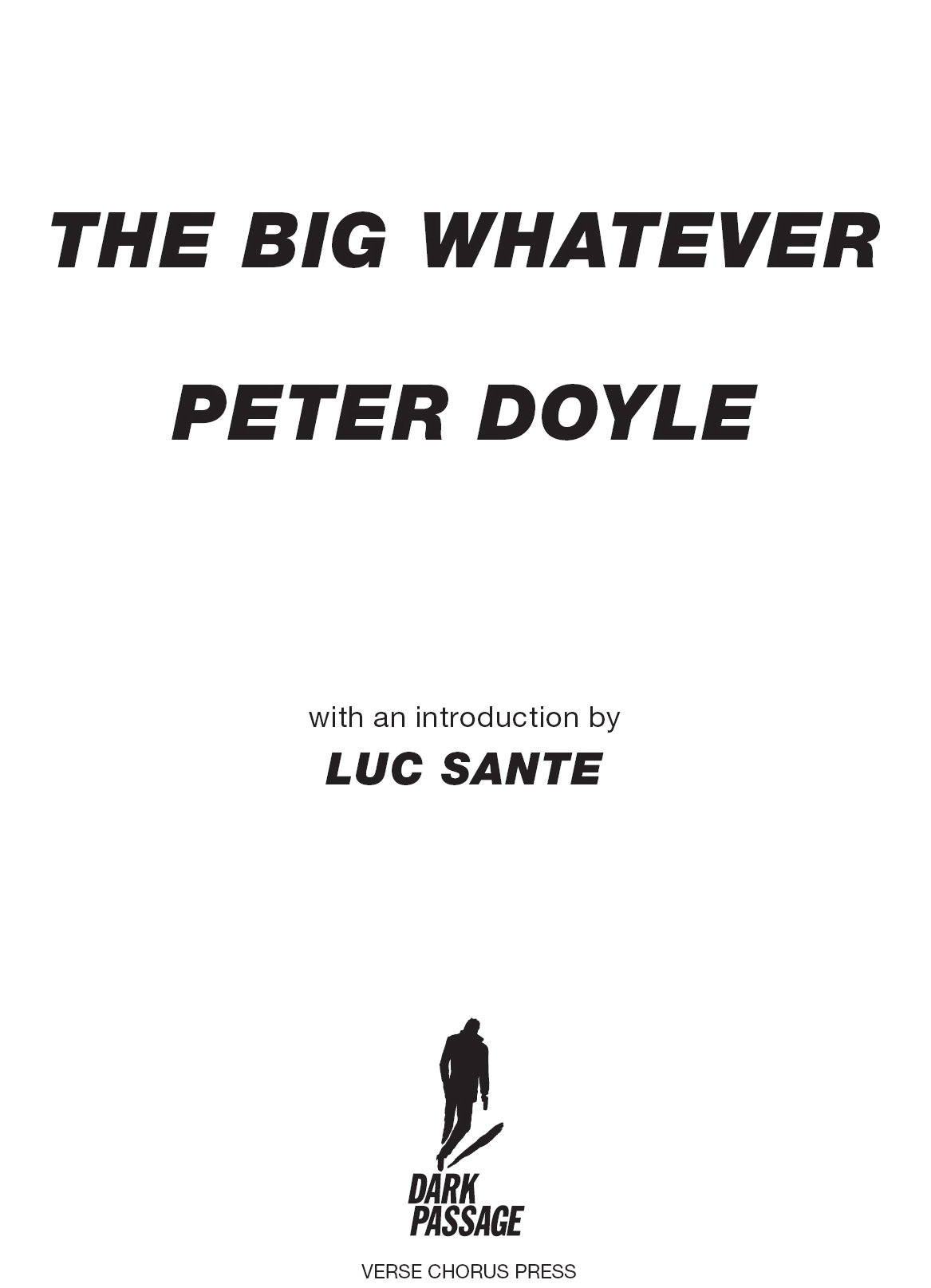 All rights reserved. No part of this book may be reproduced, stored in or introduced into a retrieval system, or transmitted in any form or by any means (digital, electronic, mechanical, photocopying, recording, or otherwise), without the prior written permission of the publisher, except by a reviewer, who may quote brief passages in a review.

Design and layout by Steve Connell/Transgraphic

The big whatever / Peter Doyle ; introduction by Luc Sante.

Peter Doyle, in addition to being a crime novelist, is also a social historian, slide guitarist, university professor, and authority on popular culture, police photography, and recording acoustics. He has acquired fantastic amounts of learning, on disparate subjects of all orders of magnitude. Unsurprisingly, he has done a lot of living, in settings of assorted highness and lowness. It has primarily occurred in Australia. That country, which happens to also be a continent, is a bejeweled anomaly in the American conception of the world. The Australians are assuredly not us, but neither are they entirely them. English-speaking, forward-looking, ex-colonial, dismissive of old-world hierarchies and formalities, inclined to avert its eyes from a gutted and abject indigenous population â Australia is like the United States on another planet, complete with flora and fauna that seem nearly extraterrestrial to foreign eyes.

Putting it that way might seem like the typical American view of the world, in which other cultures are relevant only to the degree to which they reflect â or threaten â the American project. But the two countries' ties are long and largely subterranean. Over the past two centuries, Australia and the US have done a brisk, reciprocal trade in boxers, sailors, con artists, and evangelists. Their body of lore and mischief can be glimpsed in the slang terms they hauled back and forth. Then, after World War II, America redoubled its effort to “colonize our subconscious,” in the famous phrase from Wim Wenders's
Kings of the Road
. It was handy that rock and roll came about just when the Americans badly needed a propaganda weapon that would reach the adolescents of the world. The Australians, through their port cities, received the gospel in tantalizing bits, and yet they were hip enough to be down with the Cornel Wilde look even before the accompanying music clocked in.

The absorption of American style is a continuous theme in Doyle's four novels, which form a loose chronicle of those years.
Get Rich Quick
(1996) begins in 1952; Little Richard makes an appearance, quite literally.
Amaze Your Friends
(1998) starts in 1957; you hear Lloyd Price and “Jumpin' with Symphony Sid.”
The Devil's Jump
(2001) leaps back to 1945; boogie-woogie plays throughout.
The Big Whatever
hops back and forth between the years 1969 and 1973, and between funk and “longer and longer songs, with drum solos that went on forever.” The books feature Max Perkal, the boy wonder of the 88s, perpetually just one hit away from becoming the biggest star in Australian pop history. They are narrated by his best friend, Billy Glasheen, whose purity of heart fails to prevent him from spending a great deal of time on the other side of the law.

Because for all that music is continuous in the books, skulduggery is twice as prominent. The shenanigans usually feature some toxic blend of drugs, gambling, confidence schemes, and governmental corruption â dimly but not obtrusively, the foreign reader suspects there are entire strata of allusions, in-jokes, and historical corrections going on outside one's ken. The plots take long, sinuous routes across time and space, gathering characters, generating subplots, exploding into sporadic violence, frequently ending on a note of pastoral calm. They are as involving and as difficult to reconstruct afterward as any of your Chandlers.
The Big Whatever
is similar to its predecessors but different. The times have changed, emphatically â youth rebellion has become political, and at least some of the drugs are psychotropic â and they demand a different sort of storytelling. The vehicle is a book within a book,
Lost Highway to Hell
, a very pointed roman Ã  clef directed from one character to another as a coded message, yet dressed up as pulp, observing all the pulp conventions of plot and character. The nested paperback is, in effect, the back story in semi-transparent disguise, and it presents the reader with the â pardon my French â hermeneutic challenge of translating its fictions into the actuality of the main story. This is a tactic I've seen employed nowhere else, especially not in a crime novel.

In
The Big Whatever
Billy and Max are up to their usual sort of grift, although the youth culture they've long cultivated for their own purposes has, in 1969, become imbued with the chimeric promise of revolution. This is fine with them, up to a point â revolution can provide cover for all sorts of mayhem, but it can also bring additional unwanted interest on the part of the police. But all precautions fall to the wayside anyhow, thanks to the novel's greatest creation, its agent of discord, Cathy Darnley. “Polymorphously loose,” she was a “party girl and former stripper” â “pure trouble” â “who knew everything and did anything;” “she had powers, heavy powers.” Cathy is beautiful, highly sexed, highly intelligent, and as stable as nitro. She is always the one urging direct, violent action, who takes all the insane chances and makes everyone else go along with her. Thanks to Cathy the gang stage a spectacular triple coup under cover of a Vietnam Moratorium march, and thanks in part to her it all goes terribly wrong. But that was then, and now it's 1973. The party is conclusively over; the years of lead have descended. Everyone is lying low. Wild poets and drug addicts have gone to ground as blandly respectable shopkeepers in sleepy country towns. Nevertheless, the past is unquiet, and mysteries hover over the story like ghosts, demanding resolution. As a crime novel about bitter survivors confronting the excesses of their radical past,
The Big Whatever
has a genre nearly to itself, barring only LÃ©o Malet's
Fog on the Tolbiac Bridge
and maybe some things by Didier Daeninckx.

Part of the book's appeal is, inevitably, Australia itself, especially in the extended tour of isolated hamlets in northern Victoria and western New South Wales taken by Billy late in the book, a panoramic sequence that manages to sound idyllic despite the anxieties that await the hero at every port of call, and that convincingly renders the landscape while almost entirely avoiding the longueurs of description, employing chastened language to sketch only as much as the reader's inner eye needs to see. And then there is the music of the Australian language itself, a matter-of-fact tongue with no illusions, impatiently given to abbreviating any word over two syllables, since after all “afternoon” takes longer to say than “arvo.”
There is the celebrated rhyming slang, which makes “moreton” mean “gig” by way of the intermediary “Moreton Bay fig.” And there are coinages of breathtaking directness, such as the irreducible “standover man,” meaning “extortionist,” which plays out an entire vignette in two words.

Doyle's great appeal as a writer lies in his position always as the sadder but wiser man, who has played with fire in his day and been sufficiently burned as to render him forever hesitant to pass judgment. He is tender with his characters â excepting of course the traitors and weasels and double-dealers â noting their humor and pathos and vain hopes. “Down these mean streets a man must go who is not himself mean” â well, they're not always on the side of the angels, either, or not in most obvious ways. They need cash, they need drugs, they need to preserve their hides. And yet, like denizens of the Old West, they observe a code, while it generally turns out that the forces of order, who have the same corrupted human needs, are very much less inclined to moral strictures. Doyle's heroes are fully paid-up members of the Johnson Family, the mind-your-own-business gang. In William Burroughs's words, âTo say someone is a Johnson means he keeps his word and honors his obligations'.” Doyle knows that everybody's unavoidable task in life is to avoid the other side: the shits, who often tend to be the ones wielding power.