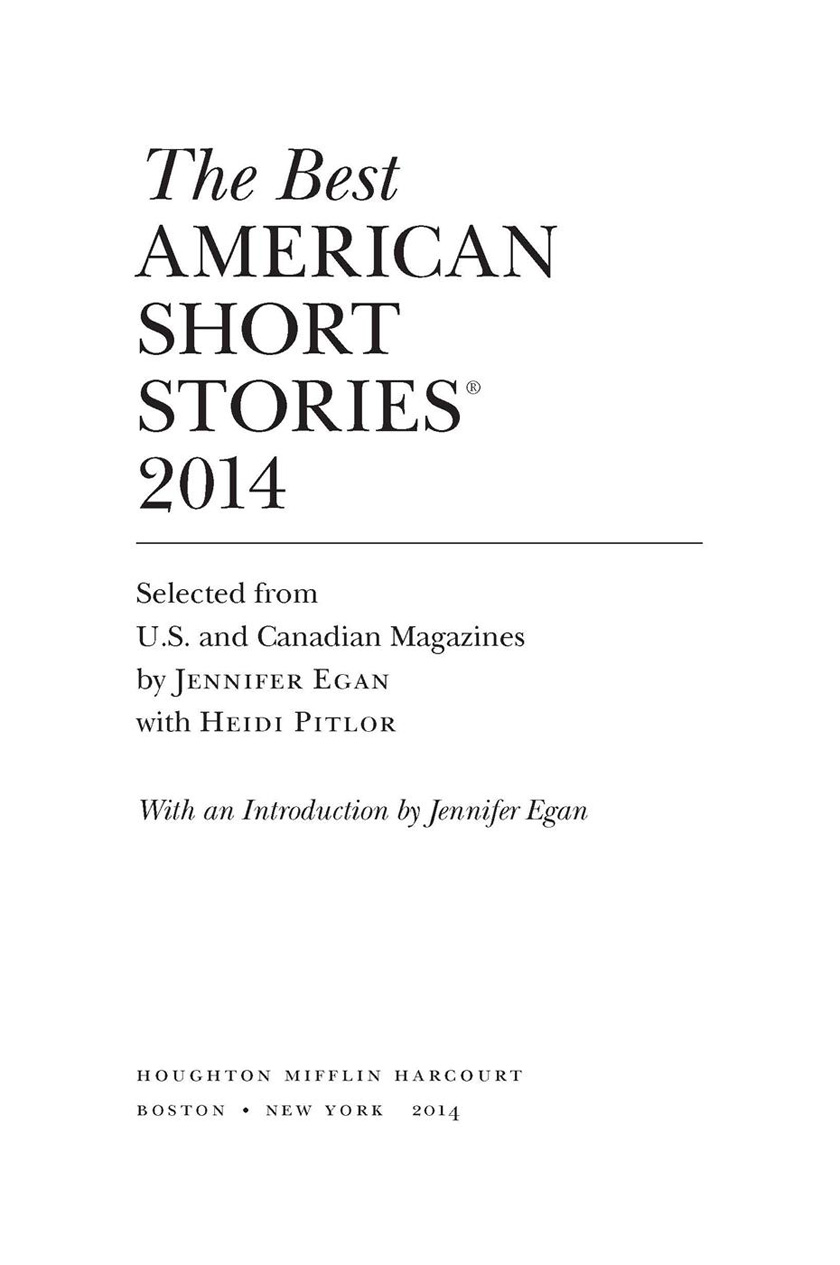 T. C. BOYLE
The Night of the Satellite

PETER CAMERON
After the Flood

DAVID GATES
A Hand Reached Down to Guide Me

LAUREN GROFF
At the Round Earth's Imagined Corners

RUTH PRAWER JHABVALA
The Judge's Will

BRENDAN MATHEWS
This Is Not a Love Song

STEPHEN O'CONNOR
Next to Nothing

Other Distinguished Stories of 2013

No part of this work may be reproduced or transmitted in any form or by any means, electronic or mechanical, including photocopying and recording, or by any information storage or retrieval system without the proper written permission of the copyright owner unless such copying is expressly permitted by federal copyright law. With the exception of nonprofit transcription in Braille, Houghton Mifflin Harcourt is not authorized to grant permission for further uses of copyrighted selections reprinted in this book without the permission of their owners. Permission must be obtained from the individual copyright owners as identified herein. Address requests for permission to make copies of Houghton Mifflin Harcourt material to Permissions, Houghton Mifflin Harcourt Publishing Company, 215 Park Avenue South, New York, NY 10003.

“The Indian Uprising” by Ann Beattie. First published in
Granta
, No. 126. Copyright Â© 2014 by Anne Beattie. Reprinted by permission of the author.

S
OMETIMES IT SEEMS
as if the aspiringâand financially well enough endowedâAmerican writer is offered more than the reader. For the young writer, there are a fast-growing number of MFA programs, fellowships, summer workshops, residencies, creative writing centers, endless books that teach about writing and publishing. For evidence of the opportunities and widespread desire to write in our country, note the sheer number of blogs that populate the Internet, the comment sections of said blogs, Facebook and Twitter (where everyone gets to be a published writer, at least within the confines of a status update or tweet), the self-published army on Amazon.com.

This year, I detected a certain uncertainty in short stories, a sense of disorientation, perhaps a reflection of these unsteady times for publishing and readers. A lot of story writers relied on a character's intuition or impulse to fuel the forward motion of their stories. As a result, many stories tended to wanderâsometimes intriguingly, often into unsettling territoryârather than accelerate toward some definitive endpoint. While some stories that I read this year were built around or upon some narrative roadwayâand many of those appear in this volumeâplenty were not.

From my vantage point, there are moments when it seems that more people in this country want to write than read. Many people who read this book are in fact writers in training, reading in order to learn to write better. I myself came to serious reading relatively late, halfway through college, and this was in a class where both reading and creative writing were taught. I soon wanted to give to others the singular high that I felt when reading an Alice Munro or a Margaret Atwood story. I should say that I went to college in Canada.

There is, of course, nothing wrong with wanting to write and seeking help in that endeavor. I am the proud owner of an MFA, a shelf full of books about how to write fiction and how to get published, memoirs by fiction writers, and at least a dozen story anthologies that I bought before I was lucky enough to land this job. But what happens if and when writers begin to outnumber readers? What happens when writing becomes more attractive than reading? Will we becomeâor are we alreadyâa nation of performers with no audience?

For the reader of books, there are book clubs, many informally initiated by friends or neighbors, a smattering of independent bookstores that serve as meeting places for readers and writers, libraries, some websites. Getting books has become easyâclick on Amazon.com, and from the sound of it, a drone will soon be able to deliver a book to your door in the time it takes to say “drone.” But I'm talking about accessible, widespread support for reading. Brick-and-mortar bookstores accessible to everyone who would patronize them. Also, a sense in our country that reading fiction is necessary and, dare I say, a wee bit glamorous. Like writing.

I had the good luck to take part in a reading and trivia night the other week at a bookstore in Cambridge, Massachusetts. This was a fundraiser for 826 Boston, a fabulous organization that offers writing support for kids. Four of us were invited to read for a few minutes, and then came a rowdy, rambunctious game of literary trivia for the mostly twenty-something audience. In order to win, players needed to have read things. There were questions about
Mrs. Dalloway
and
Let the Great World Spin
and
Frankenstein
. The place was packed. Drinks were served, fun was had. Reading became a galvanizing force rather than a solitary chore.

Soapbox alert. Weâeditors, writers, teachers, publishersâneed to do whatever we can to enliven readers, to help create communities for them if we want to continue to have readers at all. Our independent bookstores are the frontlines, and many booksellers are fighting the good fight. Here, books stimulate conversation. Conversation stimulates a sense of community. Listening happens. Thinking. The exchange of thoughts.

Here's the thing: I am guilty of spending evenings scrolling through my Facebook and Twitter feeds, telling myself that after a day of reading stories, why not give myself a break? Why on earth would I want to read more fiction? I have a list three miles long of books that I want to read. I have twenty-five books on my bedside table. It's all a little overwhelming. Why not take a few minutes or maybe an hour and see what's going on with all my “friends” and the people whom I “follow”? But then I start to become a little groggy from staring at the screen, a little glum from reading other people's opinions of the day's news, which is so rarely good. I've been trying to spend more time during the evening with books, less online, to keep myself engaged in some book, any book, at all times. Because really, what I've done all day, whether it was reading short fiction or writing longer fiction or shepherding children, does not matter. We're all tired at night. We are all entitled to some self-indulgence, be that taking a self-test on BuzzFeed or smiling at the humorous tweets from the perplexingly enormous number of writers who watch
The Bachelor
each week. But we all know the drill: if we eat only candy, if we cultivate our friendships and relationships primarily online, if we forget to walk to town sometimes instead of drive, a crucial part of us will wither. You don't have to read all the books on your list at once. Just pick up the one that grabs you right now. If you don't love it, put it down. Move on.

This year, I'm not going to vow never to dip into Facebook or Twitter, but maybe I'll go online a little less. I'm going to try to keep reading some book each night. I'm going to start asking people which books they're reading instead of which movies they have seen. I'm going to see if I can't talk a few bookstore people into starting weekly trivia nights at their stores.

One other thing. I was more aware this year than usual that American short fiction, for so long primarily the domain of the privileged white, is becoming even more so. Voices of nonwhite and nonprivileged authors and characters are too rare. We need to do better. The short story has typically been the gateway form for young authors. Our MFA programs, literary journals, summer workshops, and providers of fellowships need to send representatives into different neighborhoods, libraries, and schools to seek a broader range of voices. If there are more proactively diverse magazines that I should be reading in addition to those listed at the back of this book, please let me know. My contact information can be found at the end of this foreword.

Binding Becky by Khloe Wren
B005GEZ23A EBOK by Gombrowicz, Witold
Voyage of Slaves by Brian Jacques
Brock by Kathi S. Barton
Radical by Maajid Nawaz
The Alehouse Murders by Maureen Ash
Judas Cat by Dorothy Salisbury Davis
Circles by Marilyn Sachs
The Look In His Eyes (Jasmine & Zack, #1) by Iris Deorre
A Time & Place for Every Laird by Angeline Fortin