Read The Beginning After The End (Beckoning Fates Book 3) Online

The Beginning After The End (Beckoning Fates Book 3) 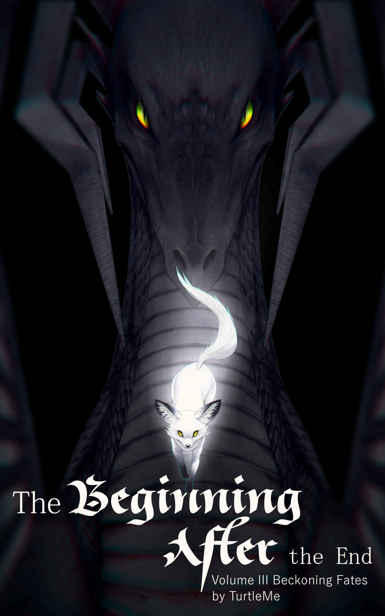 The Beginning After The End

Not Quite As
Planned

Wiser Than The
Wise

This Is Going To
Hurt

First Day At The
Job

I feel the wind get knocked out of me as Elijah, oh so tenderly, pounds
my sternum with his two fists with the force capable of resuscitating a corpse.

I throw the sleeping Sylvie at him in hopes
that she’ll protect me from my aggressive roommate.

As expected, the startled Sylv starts
clawing at Elijah’s face until she calms down and sits back down next to me.

“There has got to be a better way to wake me up
besides physical pain.”

I grumble,
rubbing my stomach.

Do you know how hard it is to wake you
up and you reward me by throwing Sylvie at me?

Even if she isn’t in her full dragon
form, do you know how sharp her claws are?” He winces as he carefully touches
the shallow scratches that Sylvie inflicted.

We’re going to be late if you don’t hurry up and get ready.

I’ve already washed up so get going lazy
ass.”

Elijah starts pushing me off
the bed with his foot before starts dressing.

I pretend to be excited as I grab my
companion and head over to the shower.

“Kyuuuu~” The desperate wails of Sylv go
out through the other ear as I haul her inside.

Sylvie now has fur, or very thin, long
soft scales that are very similar to fur.

This means that she attracts dirt like a magnet so washing her more
often becomes a necessity.

“Brother~ are you awake?”

Ellie opens the door as I was still
changing, Elijah was at least fully dressed but I only had my bottom half
clothed.

“How do you like your big brother’s awesome
muscles?”

I flex my body like a
professional body builder in a competition.

“Eww… All I see are skin and bones Brother.”
She just shakes her head, giving me a look as if disappointed by the fact that
she has a brother like me.

Tch… she was all over me when I danced with her
during her birthday party.

They
grow up too fast.

“Hurry up and get dressed and let’s eat
guys!”

Ellie closes the door and
goes on ahead while Elijah and I get ready.

The uniforms that Xyrus sent us weren’t too out
of the ordinary.

For me, it
consisted of a white dress shirt, a grey vest, a maroon string we tie around
our necks underneath the collar, and navy dress pants tailored perfectly.

There was also gold pocket watched
attached to a chain on my vest’s breast pocket, overall giving me a very
scholarly look.

Elijah’s uniform, on the other hand, looked
very sleek.

His black blazer with
white trimmings matched his black pants.

Instead of a string, he wore something similar to a tie, except it had a
flat end.

His tie was black with
one white stripe, indicating that he was a level one student. With his white
dress shirt underneath and a badge with a sword and staff crossed etched
intricately unto it, he looked dashing.

Instead of the usual tools a Conjurer may use,
Elijah, instead, fashioned a black two-part band on his index and ring finger.
These two bands were connected by a thin black chain, which gave him a gothic
look, especially now that he recently purchased new glasses that were a bit
more fashionable.

He made it pretty
clear to me that this would be his debut in finding a girlfriend so he took
great pride in how he looked, although he always grumbled on about how no
matter how much he tried, he wouldn’t be as good-looking as me.

What can I say? I need to thank mother and
father for their genes.

Taking a good look at both Elijah and myself in
the mirror, I could tell how much we’ve matured physically.

The once nerdy Elijah from two years ago
was now gone, a more sharp and cold look replacing it, which oddly contradicted
from his personality.

As for myself, my eyes were a rich sapphire
color that almost seemed to glow.

My hair was a fiery auburn color that contrasted well with my eyes.

Bluish eyes and reddish hair made me
realize how coincidental it all was.

What are the odds that my defining traits aligned with the two base
elements I was most adept at?

My
facial features were a lot softer compared to Elijah’s but while soft and kind,
it looked poised and elegant.

I looked and studied my face as if it wasn’t my
own.

Even after 12 years in this
body, I wasn’t used to my appearance compared to the rather normal face I had
in my old world.

“Are you sure you made the right choice
Art?

I can’t believe you wanted to
go in as a Scholar Mage.

I thought
you would for sure go in as a Battle Mage like me.”

Elijah said while he was styling his
hair.

The trim straight black hair
that he had was now shorter and styled to the side.

“And I can’t believe one of the main reasons
you wanted to attend Xyrus as a Battle Mage student was because it had cuter
girls.” I slapped him firmly on the back while giving him a perverted smile.

“Shut up… Just you watch.

The new and improved Elijah will get an
awesome girlfriend that can only make you drool in jealousy!”

He adjusts his blazer and takes one last
look at himself.

Obviously
satisfied by his appearance, he walks towards the door while I follow, Sylv
hopping on top of my head, her small claws digging into my scalp to keep grip,
making me slightly worried about premature balding.

“Took you boys long enough to get ready!

Who are you guys trying to
impress?”

My mother shakes her
finger at us while Tabitha, who was in a matching apron with my mother starts
giggling.

Lilia is going to be up on stage for the
orientation since she’s part of the student council.

She must be nervous so make sure you
cheer her on.”

Tabitha sits down
across from us next to Mother and Ellie.

“I see the both of you are wearing the
necklaces I gave you.”

I say while
my mouth was still full of oatmeal and fruit.

“Yup, why wouldn’t I when it’s such a beautiful
piece of jewelry.

I wish your
father had half the amount of sense as you do…” My mother sighs as she fiddles
with the Phoenix Wyrm ornament.

“All my friends are jealous because of how
pretty it is!

Be sure to get me
things like these more, okay Brother?”

“Well be sure to give me a reason to want to
give you more things like that then.”

My brotherly
side still wishes for her to grow up into a fine lady.

“Umm… Aunt Alice, do you mind healing my face
before we go to school?

I don’t
want my debut at school to go wrong because of these cat scratches.”

He turns his gaze to Sylv who just
sticks her tongue out.

Come here and let me take a look at that.”

Mother places a hand in front of
Elijah’s face and whispers a small chant before a glow started emanating from
her fingertips.

A few moments
later, the small scratches on his face all disappeared and Elijah let out a
relaxed sigh.

Elijah leaned back in his chair and
continued eating breakfast.

My father comes in, quite evident that he was
training from the sweat he had. “Sorry I’m late for breakfast! I was in the
middle of a small breakthrough!”

He
excitedly sat down and looked at Elijah and me.

“Wow~ my two boys are already going to
school.

I can’t believe it.

“What do you mean we?

I was the one that raised him.”

My mother sits up proudly.

My father scoffs, “Tch~ I guess I only raised
my children when they’re getting into trouble then huh.”

My mother states matter-of-factly,
causing the whole table to laugh.

The only ones missing were Vincent and
Lilia.

Lilia had to go to school a
few days earlier since she had to do some work but Vincent has been more and
more busy these days as he is part of the management committee for the ship,
Dicatheous, setting sail today.

“I was pretty surprised when you said that you
wanted to attend Xyrus as a Scholar Mage though, Art.”

My father brings up with while chewing
on his eggs.

“Yeah, both are good choices but Battle Mages
are the ones that get all the glory.”

Lilia was a
Battle Mage as well despite disagreements from both Tabitha and Vincent.

The two of them wanted Lilia to become a
Scholar Mage since it would be a lot less dangerous but Lilia was persistent on
making a name for herself.

“Haha, I’ll still take some general classes on
Mana Battling whenever I can to loosen my muscles but there’s not much for me
to learn if it’s just fighting tactics.”

“Not much to learn from… If any of the students
heard you say that, you’d get beat up… no wait, they can’t even beat you
up.”

Elijah just laughs at himself
at the thought of the massacre the school would have if anyone picked a fight with
me.

“Please control yourself to a degree Arthur,
there are very influential family members attending that school.

You wouldn’t want to create trouble for
Tabitha’s family.”

My mother
chides, her face filled with worry.

I’ll be sure to only moderately beat
people up!”

I salute while stuffing
my face with more oatmeal while Sylv steals the fruits on it.

My mother just shakes her head but my
father laughs when a maid walks in.

Redemption(Struggle #3) by P.A. Jones
The Spanish Outlaw by Higgins, Marie
Love In Alaska (The Love In 50 States Series Book 2) by Gates, Shelby
Rutherford Park by Elizabeth Cooke
A Scream in Soho by John G. Brandon
Long Live the King (An Italian Mafia Romance Duet #2) by WS Greer
Seekers of Tomorrow by Sam Moskowitz
Ray of Love (Lifestyle by Design Book 3) by Charles, Miranda P.
The Ginseng Conspiracy (A Kay Driscoll Mystery) by Bernhardt, Susan
Girl from Mars by Tamara Bach