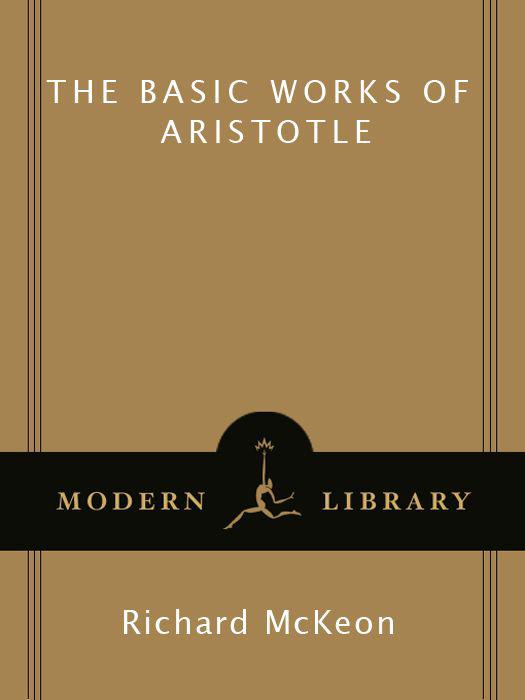 The numbers set within the text of this edition refer to the corresponding lines of the Greek text in the great modern edition of Aristotle’s work published between 1831 and 1870 by the Berlin Academy. The pagination of the Berlin edition has become the customary means by which to locate a passage of Aristotle. A reference to, say,
Metaphysics
xii. 10. 1075
a
25 would place the passage in question in Chapter 10 of Book 12 of the
Metaphysics,
on line 25 of the first column, i. e., column a, of page 1075 of the Berlin edition.

All rights reserved under International and Pan-American Copyright Conventions. Published in the United States by Modern Library, an imprint of The Random House Publishing Group, a division of Random House, Inc., New York, and simultaneously in Canada by Random House of Canada Limited, Toronto.

Aristotle was born in 384/3
B.C.
in the little town of Stagira on the eastern coast of the peninsula of Chalcidice in Thrace. His father, Nicomachus, was court physician and, according to tradition, friend of Amyntas II, king of Macedon and father of Philip the Great. Nicomachus died while Aristotle was still a child, and he was raised by Proxenus of Atarneus, whose son Nicanor was later adopted, in turn, by Aristotle and was married to Aristotle’s daughter. In 368/7, at the age of eighteen, Aristotle was sent to Athens, where he remained in close association with the Academy of Plato for twenty years, until the death of Plato in 348/7. After Plato’s death he left Athens and, together with Xenocrates, visited the court of Hermias, a former member of the Academy who had become tyrant of Assos and Atarneus in Mysia in Asia Minor. Aristotle married Hermias’ niece Pythias, and he probably taught at a kind of Academic center in Assos. Somewhat later he went to Mitylene in Lesbos, where he doubtless engaged in biological research. In 343/2, on the invitation of Philip of Macedon, he became tutor to Alexander. The instruction probably extended only to 340, when Alexander was appointed regent for his father, but his tutor did not return to Athens until 335/4, a year after the death of Philip.

The next twelve years Aristotle devoted with extraordinary industry to the establishment of a school, the Lyceum, to the institution and pursuit of a program of investigation, speculation, and teaching in almost every branch of knowledge, and to the composition of all, or most, or at least the more scientific portions, of those of his writings which are now extant. When Alexander died in 323, Aristotle’s Macedonian connections brought him under suspicion and he fled Athens lest, as he is said to have remarked, the Athenians sin twice against philosophy. An accusation of impiety was brought against him, not unlike those which had been brought against Anaxagoras and Protagoras or that on which Socrates had been condemned. The specific charge was that he had instituted a private cult in the memory of his friend Hermias, since he had erected a statue to him at Delphi and had composed a poem, in what was alleged to be the manner of a paean, in his honor. He took refuge under the protection of Antipater, viceroy to Alexander, in Chalcis in Euboea, where he died in 322 a short time before the death of Demosthenes.

Most of the scant information that has come to us concerning the life of Aristotle is suggestive, but there is little positive evidence, in his works or in external sources, to support inferences concerning the formative forces that
influenced his work. Since his father was a physician, he was a hereditary member of the guild of Asclepiads, and it is tempting to speculate on the youthful beginnings of his interest in biological investigations and his possible training in dissection, pharmacology, and medicine; but his father died when he was young, and there is no evidence in his works of an early training in medicine. He spent twenty years in the Academy; that period has been used as evidence of a close association with Plato which resulted in a deep impress on his thought, but it has also been argued, by scholars like Burnet and Taylor, that Plato was not in the Academy at the time of Aristotle’s arrival, that he was away for repeated and lengthy periods during Aristotle’s stay, and that Aristotle’s knowledge of Platonism was acquired at secondhand and was never accurate. We do not know how he spent his time at the Academy: there is an ancient tradition that he undertook the teaching of rhetoric in opposition to the flourishing school of Isocrates; it seems probable that he participated in the biological research which was flourishing at the Academy; the fragments of his early dialogues suggest that he wrote works intended to popularize Platonism. His reasons for leaving Athens on the death of Plato can only be conjectured: he may have been dissatisfied with the prospects of the Academy under Plato’s nephew and successor Speusippus, who seemed to Aristotle to have reduced metaphysics to mathematics, or Speusippus may have charged Aristotle and Xenocrates to open a branch of the Academy in Asia Minor. He probably taught in Assos; there is evidence in his biological writings that he collected specimens of animals and fish in Lesbos and in the waters adjacent to the island; he doubtless began the composition of some of the works that have survived during his travels.

In spite of the fact that the relation between Aristotle and Alexander has been a tempting subject for speculation since Plutarch and that the ambition to influence kings through philosophy was deeply implanted in the Academy, there is no evidence that Aristotle had any influence on the moral ideals or political ambitions of his royal pupil, and Aristotle in turn seems to have taken no account of the effects of the ideal of world empire on the forms of political association and on the possible survival of the Greek city-state. There is good reason to doubt the accuracy of the legend that Alexander sent records of astronomical observations and biological specimens to his former master from the East. His writings contain interesting sidelights on the methods and adjuncts of teaching in the Lyceum, but the relation of his writings to the work of the Lyceum, and even the order of their composition, are far from clear. Since they are obviously not “published” works, it has been supposed that they are “lecture-notes,” notes of students, or records of research and thought, brought periodically up to date, for consultation by advanced students. Since the structure of his doctrines is complex, and since he was long associated with the Academy and later a persistent critic of the doctrines
of the Academy, his works have been chopped into pieces by critics seeking an evolution in them from Platonic idealism to scientific empiricism.

The period of Aristotle’s manhood coincided with the reduction of the Greek city-states to the hegemony of Macedonia and the twelve or thirteen years of his work in the Lyceum with the campaigns of Alexander the Great. Hermias was doubtless a kind of advance-guard of Philip’s projects against the Persians; Philip’s choice of Aristotle as tutor to Alexander associated him closely with the political fortunes of Macedonia; and Alexander doubtless suspected him of complicity in the plot against his life for which Aristotle’s nephew Callisthenes was executed; it is highly probable that the Lyceum received support and endowments from Callisthenes, Antipater, or even Alexander. In an important sense an epoch of Greek history was brought to a close when Alexander, Aristotle, and Demosthenes all died within somewhat more than a year.

The life of Aristotle was thus spent in a period which has seemed confused and dim to historians who have learned from Demosthenes to see it as the time of the loss of Greek liberties and the decline of Greek ideals; it has seemed a period of stirring action which came close to the fulfillment of an ambitious hope to those who see in the growth of panhellenism preached by Isocrates the beginnings of more stable political organizations and in the exploits of Alexander the spread of Greek ideals. Aristotle spent a large part of his life as an alien in Athens, and he seems to have been unsympathetic with, if not unmindful of, the ambitions of Alexander. Contemporary political events and social changes left few marks on his political and moral philosophy, and the search for effects of social conditions in his metaphysics and in his contributions to science has led only to speculative generalizations concerning the influence of environment on thought: to the conclusion that the existence of classes in society suggested hierarchies in his conception of the universe, that slave labor led him to neglect the mechanical arts and prefer the theoretic to the practical sciences, that his theories were therefore verbal rather than based on the resources of experience, and that his physical principles reflected his conception of political rule. Apart from such speculations, it is clear that the peace which was forced on Athens by Macedonian domination permitted Aristotle to organize a course of studies and to initiate a vast scheme of research into the history of political organizations, of science, and philosophy—the study of constitutions of Greek states, of the history of mathematics and medicine, and of the opinions of philosophers—as well as into the natural history of minerals, plants, and animals, and to lay the foundations thereby for one of the first attempts at an encyclopedic organization of human knowledge.

How to Use Chapter and Footnote Links

DE ANIMA (On the Soul) (complete)