The Ballerina & The Fighter (Book 1) 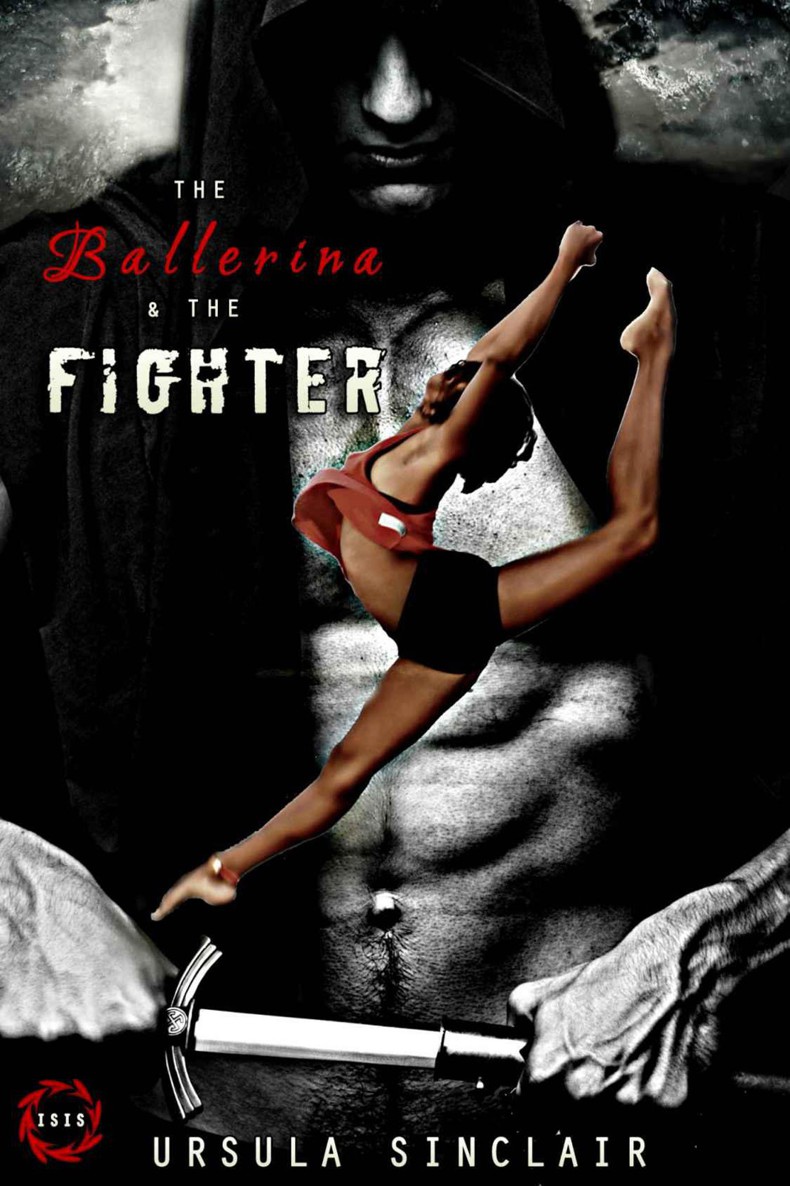 This
book is a work of fiction. Names, characters, places, and incidents either are
products of the author’s imagination or are used fictitiously. Any resemblance
to actual events or locales or persons, living or dead, or other status is
entirely coincidental.

All
rights reserved, including the right to reproduce this book or portions thereof
in any form whatsoever known, not known or hereafter invented, or stored in any
storage or retrieval system, is forbidden without written permission of the
author. LaVerne Thompson. [email protected]

For my daughters, who
took to the sky and soared. I love you both.

For a long time I’ve wanted to write a
story about a ballerina, given that for 15 years ballet was my world not
surprising. I owe thanks to many people for their helpful insights into this
work. First and foremost my ballerina, Lauren Thompson. I still cry when I
think of you on stage and what a beautiful dancer you were to watch. And thank
you for helping with the ballet terms and movements. Any mistakes are my own.
Scarlet Hunter and Stephanie Williams my partners in crime. What would I do
without your red all over my work. lol. To my editor Lara, hang on working on
book 2 and you’ll be the first to read it. Lol And to Dee for an awesome cover.
I can not wait to see what you do with the next one. And yes we’ll probably argue
about the feet then too. And VR you rock!

The first time I saw her it
was evening, that time of day when the setting sun hit the ocean and turned it
a burnt orange. Most of the vacationers had deserted the beach for the
restaurants, swarming the main drag or the barbecues in their rented back
yards. There were only a few folks here or there walking or hanging around the
water’s edge, but it was a great time for my run. Even though I was on down time
I never stopped training. I listened to an Eminem track on my
iPhone
, perfect for my pacing.

The breeze from inland drew
the heat from the sand beneath my bare feet and the salt spray from the ocean
cooled my body as I ran through the waves lapping at my ankles. My stride went
from a jog to a walk until I stopped altogether, and pulled my ear buds outta
my ears.
She
was doing these
beautiful leaps into the air, but the one that stopped me in my tracks was the
firebird. At the time I didn’t know what any of them were called, only that the
beauty of the evening paled in comparison to the female that stole my
attention, as she propelled her body through the air. Like gravity had no hold
on her. As a mixed martial artist, I understood the way gravity could be
manipulated but this girl took it to another level. I’d been studying martial
arts all my life and had never really seen anything like it. But from some part
of me the word ballet whispered across my consciousness.

She landed perfectly on the
sand on her toes, while the other leg was stretched in a straight line, aiming
for the sky. Her upper torso leaned slightly forward, one hand reached toward
the sand and the wind whipped her long hair about hiding her face from me. The
ballerina, that’s what I decided she had to be, lowered the airborne leg, and
as soon as both feet were on the ground she ran toward a white girl who held a
camera. Then it dawned on me, they were taking pictures. They were both around
the same age, anywhere from sixteen to nineteen. They were huddled over the
camera screen. I was kinda curious to take a look at those pictures myself and
see the face of the girl who could fly so effortlessly through the air.

I didn’t even realize I was
headed in their direction until the girl with the camera glanced up and gave me
an eye fuck, before nudging her friend who raised her head and our gazes
locked. I stumbled. I never stumble. But even from twenty some feet away this
chick had some kinda hold on me.

“Nice moves,” I said, as I
approached them. I stifled a groan. Could I be any more lame? Still both girls
smiled at me. Damn ballerina had the cutest set of dimples. I wanted to dip my
tongue into them.

Brown eyes with a hint of
green in the center stared unblinking back at me. A face some might call oval,
I called perfect, was the canvas for a button nose and sexy ass lips that
screamed for my mouth on hers. Fuck this girl was hot. Her body had a natural
tan and the time in the sun had added a hint of gold to her already dark honey
complexion. She had on those kind of low cut short denim shorts that could pass
for panties and a cropped red top that showed off a flat stomach. She wasn’t as
curvy as most of the girls I normally go for, her breast would barely fill my
hand, but hers was a finely toned slightly muscled body. That of a dancer. And
her legs. I shit you not, her legs would wrap nicely around my waist, or
another image flashed across my mind that had the blood rushing to my dick. I
knew she’d be flexible enough to wrap those legs over my shoulders as I pushed
all the way deep into her.

I don’t know how long we
stood there checking each other out. Now I knew what that shit means, ‘when
time stands still’.
What the fuck?
But there it was. She blinked and glanced over at her friend. I’m glad she
broke eye contact because it freed me from whatever the fuck was happening to
me. I shook my head to clear out any damn cobwebs trying to take root and
opened my mouth.

“Can I see?” I kept my hands
at my sides, not trying to come off too pushy by reaching toward the camera.

Her friend had a dancer’s
body also and was pretty too, they both carried an air of refinement about
them, but I only had eyes for my ballerina. Damn, I already thought of her as
mine. I was obviously out of my mind or horny as hell. Both maybe. The girl
with the camera turned it around so I could look at the pictures they’d taken.
I stepped closer and touched the side of the camera and looked at the screen.
Shit, if I didn’t want this girl more. I was glad I wore loose cropped sweats
to hide the fact my dick was awake and taking notice.

“Damn. These are really
good.” There were pictures of the other girl too doing leaps but she didn’t
quite have her friend’s flexibility. I didn’t think many folks would. “Are you
ladies ballerinas?”

“Yes,” the one with the
camera answered. “My name’s Shelly.” She glanced slyly at her friend and
grinned. “And this is Ivy.”

I flashed them both my best
smile. I’m not bragging, but getting girls had never been a problem for me. I
was well aware of my looks, had been since I was thirteen. I’d even had men
come on to me. I don’t walk that way, but I’d walk along and do other things
just fine with Ivy. My gray eyes locked with Ivy’s when I spoke my name.
“Maze.”

“So Maze, you staying around
here?” Shelly asked.

I briefly glanced at Shelly,
her blue eyes still sparkled with interest, but I turned my attention again to
Ivy. “About two miles down the beach. I’m staying at an ocean front house
called Glory Days. It’s just yards from the beach, only thing between it and
the ocean is sand.”

The house in Duck belonged to
a friend of my trainer, manager and stepfather, Joe Chang. He’d raised me since
I was five years old and my mom died in his arms from a gunshot wound. He and
my mom weren’t exactly married but they’d been living together for about two
years and had a little convenience store in a small shopping center in
Baltimore, Maryland. Not the best of neighborhoods but not bad either. Until
two fuckers came in after the morning rush and put two bullets in my mother and
one into Joe. I had been asleep in the back. To this day a car back firing had
my heart racing and blood rushing through my system preparing for flight. I
blinked to stop the dark thoughts. It had been a long time since I had
nightmares about that day, and how I lived in fear that Joe would abandon me
too. I don’t know how Joe, a single Chinese man, managed to do it, but he
adopted me, a Caucasian boy. I tell people he’s my stepfather, he’s really more
father to me than the one whose sperm was donated for my birth, and who
disappeared at that time.

“We’re in the second house on
the left of the walk way over there.” Again it was Shelly who spoke as she
glanced over her shoulder in the direction of the walkway. I had yet to hear my
ballerina speak and found myself wanting, needing to hear the sound of her
voice. I was seriously fucked up.

“How’s about I take a couple
of shots of the two of you?” I offered again flashing them my best smile.

“That would be great!” Shelly
raised the camera strap from around her neck and took it off, handing me the
camera.

She pointed at a button on
the top of it. “Just look through the viewer and press that button. It’s
already set so there’s no flash, and it’s an automatic focus so just press and
you’re good.”

I nodded. “Easy enough. Let’s
take some here on the sand then move back over to the water.”