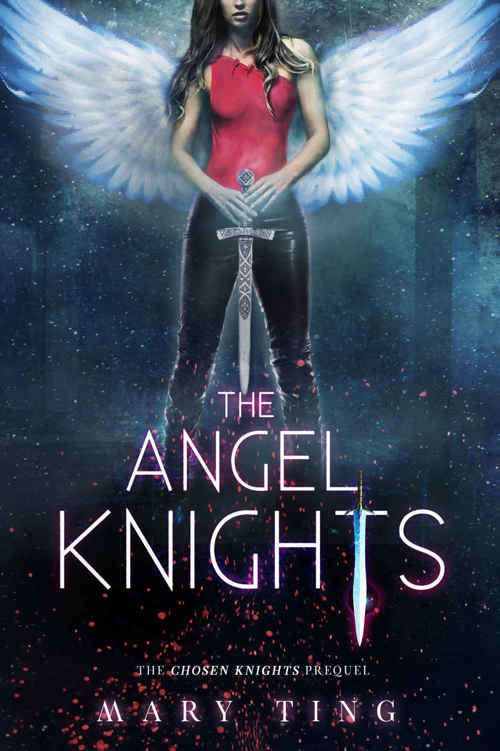 This is a work of fiction. Names, characters, places, and incidents are products of the author’s imagination or are used fictitiously and are not to be construed as real. Any resemblance to actual events, locations, organizations, or persons, living or dead, is entirely coincidental.

All rights reserved. No part of this book may be used or reproduced in any manner whatsoever without written permission, except in the case of brief quotations embodied in articles and reviews.

(Prequel to The Chosen Knights)

“Shhh,” my father whispered. With his sword by his side, he held out his hand to gesture for us to stay behind him.

My team listened, mimicking the way he held his weapon, as we allowed him to take the lead. Fear had taken me over and my heart pounded against my chest. This terror was easier to conquer during training than in real life. Our team had scouted around the world with our mentor, Uncle Davin, many times before, but Father’s presence meant we were about to face very powerful demons.

For the first time since I’d been born, a disturbance had awakened at a place in between Heaven and Earth called Insula. Knowing such a marvelous place had evil lurking about gave me the creeps. The grand mountain and its soft waterfalls, with the blanket of vast flowers spreading, rolling foothills as far as I could see, radiated an enchanting sight in Insula—a place of splendor, the vividness of the colors and the stillness, almost like a painting.

“What are we waiting for?” Uncle Davin asked from Father’s side.

“To see where these demons are hiding. Something isn’t right. I can’t seem to pinpoint its direction, yet I can feel them so close.”

“I feel the same way, Michael.” Uncle Davin glanced around, sniffing. “That pleasant scent is throwing me off. I want to drown myself in these flowers.”

Father’s words sent goose bumps running up my spine. If he couldn’t detect them, how were we supposed to? But I knew what he meant; the same sensation flooded through me. My brother, Zachary, looked baffled too. The other three members of my team glanced around erratically with huge, terrified eyes, I understood. We had to conquer our fears, remember the strategies we’d learned, and pray we came out alive. Unfortunately, danger followed us because of who we were—demon hunters. Venators. Gripping my sword tighter, I prepared for what may come.

Father gazed down at the colorful flowers surrounding us, reaching about knee high. They resembled the California poppy in the human world, but in such magical places, flowers were large in size, and difficult to move through.

“Something is coming. Can you feel it, Michael?” Uncle Davin asked.

“Yes.” Father turned to Zachary and me. “No matter what, stay behind me.” Then he gazed at Victoria, Jude, and Isaac. “Stay behind Davin.”

“It smells nasty.” Victoria turned in a complete circle. “The sweet fragrance is gone.”

Victoria was right, but Father’s wings slowly expanding distracted me. Each feather moved into place, layering one on top of the other, fanning out to its fullest. His heart-shaped wings were sharp as knives in battle form, towering over us, making me feel so small.

Father had a warrior’s body, but his wings alone made a statement. They were deadly enough to scare anyone away, and yet they were the most magnificent things I’d ever seen.

“Swords up!” Father ordered, and raised his own. Then he looked down at the flowers and his eyes grew in recognition. “I should have known. They’re in the—”

Before he finished, the demons sprang out from the flowers like ghosts, resembling the color of the flower at first, then transforming into the white, translucent form we’d studied. They looked harmless until they showed their true faces. With hideous, skeletal heads and bony hands, they each held a sword in front of them.

“Great. My favorite.” Uncle Davin sounded annoyed. “Out of all the demons, why does it have to be them?”

Before my mind registered the situation, a demon swung its sword at me. Father jumped in front of me and struck the demon. Stunned to see them in real life, I’d frozen in place.

“On your guard, Lucia.” Father snapped me out of my stupor.

Pushing aside the fear, I blocked a hit meant for me. As my confidence grew, I strategized my next move. Flashing my wings open, I used them as a shield and fought off the demons surrounding me.

Uncle Davin wrestled the hilt away and stabbed the creature through the left side of its chest. “Aim for the heart. That’s the only way you can defeat it!” he screamed.

Uncle Davin had told us about them. He’d once fought these evil beings in a high school gymnasium when they were after my mother.

Several demons had raised Jude by his wings. Swinging his weapon in every direction, he struggled to free himself. Putting away my sword, I willed my bow to appear and shot radiant orb, which shone brightly enough to blind a demon. It hit one dead-on just before the creature struck Jude, allowing him enough time to slash at it with his sword. Uncle Davin caught him in midair and brought him down safely.

We did not have ordinary bows. They were thick and long, without any strings or arrows. When we needed to use them, we pulled back our arm as if there were an arrow and string attached to the bow, and then let go. What came out of the bow was magical—silver lights, like lightning bolts, sizzled and zapped to the target. The force and direction were pretty accurate. The bow also lit up on command in dark places.

I’d made the mistake of being too concerned about Jude when I should’ve been concentrating on my own safety. It had been ingrained in me from training, but I had failed to learn thus far. One of the demons knocked me to the ground, and just as its sword dropped down toward me, I rolled over. It missed, but I had another problem: I now faced three demons at once. Holding my bow in front of me, I struck one in the gut. Then the other two vanished.

“Don’t touch my daughter,” my father growled, effortlessly lifting me off the ground. Father looked at me with loving eyes. “Stay close.”

“Right here. I’m fine,” I said. Being minutes older than me, he’d always felt the need to protect me. He always had one eye on me and the other on his opponent.

As the clanking of swords continued, our blows sent flower bits flying into the air. The demons flew in every direction, trying to confuse us. Stabbing their hearts when they moved like the wind proved to be harder than it looked. Several of the demons came at me at once, so I ducked and curled inward to block their blows, bringing my wings around to cover me completely. Then I flashed my wings open to knock them down.

“Great job!” Father said, finishing the rest of the demons on my tail. “Tunnel formation,” he ordered. “We need to draw them to one place.”

Knowing what he meant, we ran at the speed with which only angels moved. The demons were confused, trying to attack but unable to focus. When they had been surrounded by the tunnel of wind we had created, Father flew up high and dove down in the middle, spinning rapidly with his sword extended and using his wings as weapons as well. While Father continued, we joined in. Before I could count to ten, the demons were all destroyed, and my heart became steady again. The demons had turned to white ashes floating around us. It looked like snow, or even feathers, but they were far from beautiful. I grimaced and tried to avoid letting them fall on me.

“Great teamwork.” Uncle Davin smiled, looking proud. Then he turned to Father. “You’re awesome. Your wings are the bomb.” Uncle Davin patted Father’s back so hard, he faltered several steps ahead.

Father glared and then gave him the playful evil eye. “The bomb?”

“Yeah, you know. Never mind.” Uncle Davin arched his brows. “You need to get with the humans.” He patted Father again and walked away with a smirk.

“What did he mean ‘the bomb’?” Father muttered under his breath.

I giggled. Father had told me Uncle Davin went out of his way to blend in with the humans and learn all the slang words. At times, Uncle Davin would travel to Earth alone and tell us what he’d observed when he came back. We’d learned so much about humans from Uncle Davin.

“The bomb?” Victoria’s long, neatly-braided hair was disheveled. Her bangs covered one side of her furrowed eyebrows. “I’ve never heard that phrase before.”

“We didn’t do too badly, so I say we were the bomb, too.” Isaac waggled his brows, his blue eyes twinkling.

“I’m just glad your father came with us. I’m not sure what we would have done.” Jude’s mouth pinched together in worry. He seemed traumatized by what he’d been through. “By the way, thank you for looking after me. I could’ve….”

I smiled. “You would have done the same for me. We are a team, after all.”

Zachary draped his arm around Jude to give him comfort. “It would have taken us longer to have Insula back under control, but we would’ve been just fine. Uncle Davin would have still come to guide us.”

I didn’t know if Jude believed Zachary, but his shoulders eased and his wings relaxed.

“Zachary is right,” Father stated firmly. “Don’t ever underestimate yourself and your team. If you allow fear and doubt to take you over, you’ll not only hurt yourself, but your team, too.”

The damage done by the demons was horrendous. A massive space, which was once covered in flowers, lay flowerless and covered in white ashes. As if Father knew my thoughts, he rested his arm around my shoulder and his wings covered me protectively.

“They’ll grow back.” He kissed my forehead. “But you won’t. So always be careful.” He paused. “Let’s go home.”

One by one we soared in a straight-line formation behind Father. The area where we’d battled held much evidence of demon presence. Eventually, like Father said, the flowers would grow back. To me, it symbolized that good would conquer evil in the long run.

Hamish Macbeth 09 (1993) - Death of a Travelling Man by M.C. Beaton, Prefers to remain anonymous
Not a Drop to Drink by Mindy McGinnis
Beyond the Rising Tide by Sarah Beard
The Guest List by Melissa Hill
The Debutante by Kathleen Tessaro
Break the Sky (Spiral of Bliss Spin Off) by Nina Lane
Blackstone and the Endgame by Sally Spencer
All or Nothing by Belladonna Bordeaux
The Limping Man by Maurice Gee
The Sigh of Haruhi Suzumiya by Nagaru Tanigawa