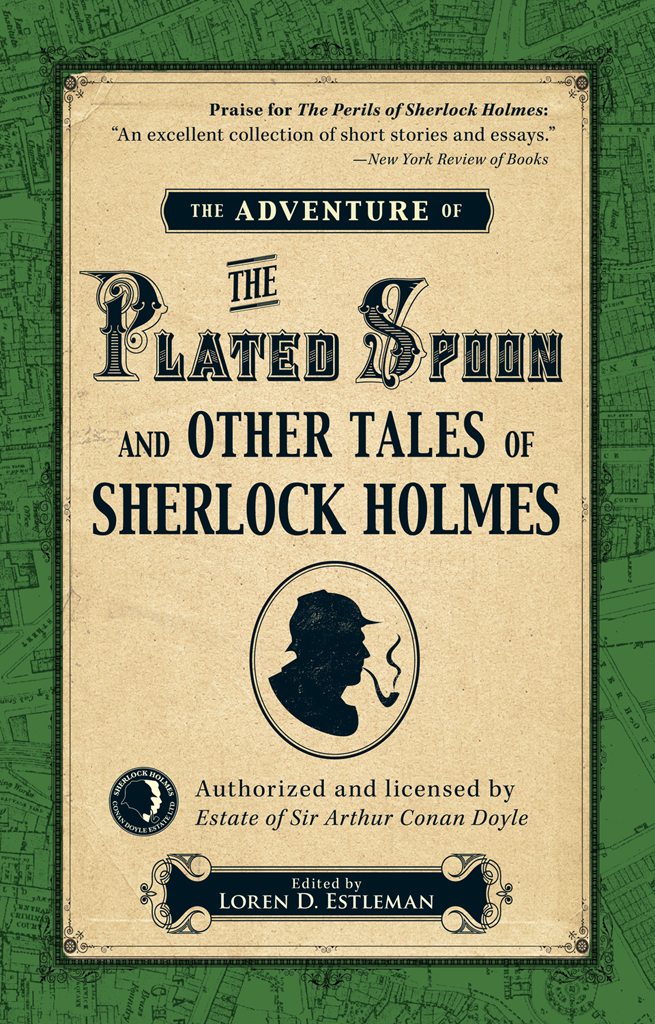 As always, this book is dedicated to the memory of Sir Arthur Conan Doyle; with additional thanks to Ormond G. Smith and John Russell Coryell, creators of Nick Carter, the American Sherlock Holmes, and to Frederick Van Rensselaer Dey, who wrote more Carter stories than any other author.

Those Frenchies seek him everywhere.

Thus, in the Baroness Orczy's timeless
The Scarlet Pimpernel
, does the foppish Percy Blakeneyâaltogether a more entertaining character than his alter ego, the swashbuckling Pimpernelâsum up the spectral character of the enemy of Republican France under the Terror. He is, it seems, ubiquitous, yet invisible.

The first adjective sums up another great figure of literature, while the second most certainly does not. Sherlock Holmes is, indeed, everywhere, and as obvious to all as the most minute clues were to him.

I've said elsewhere that Holmes shares a special place in our language with Frankenstein and Dr. Jekyll and Mr. Hyde, as a shortcut to explanation. People who have never read the classic novels written by Mary Shelley and Robert Louis Stevenson, and who have managed to avoid their innumerable adaptations to film and radio, know what it means to “create a Frankenstein,” and recognize “a Jekyll and Hyde character” when they see one; likewise, people ignorant of the novels and stories of Sir Arthur Conan Doyleâand their innumerable adaptations to film and radioâare aware of what's intended when one party calls another “Sherlock.” Depending upon the context, the second party has either been complimented upon his perspicacity or made the butt of withering sarcasm.

Slow to catch on in the beginning, the world's first consulting detective and his amanuensis, Dr. John H. Watson, clicked with their third outing, “A Scandal in Bohemia,” assuring that brand-new enterprise known as
The Strand Magazine
six decades in the stalls and immortality in legend. From the moment Holmes laid eyes upon the cunning Irene Adler in the July 1891 issue until thirty-six years later, when he reasoned out the eccentric behavior of Sir Robert Norberton and his sister, Lady Beatrice Falder, in “The Adventure of Shoscombe Old Place,” the detecting partners were a public fixture, having made the leap meanwhile from printed page to early motion-picture screenâand from the shadowy fluff of imagination to the solid marble of myth.

I speak not of the connoisseurs: the variegated buffs, scholars, and debaters who have flayed and reassembled Holmes and Watson in learned papers and at lecterns in both hemispheres, written straight-faced “obituaries” of them both, and attempted, with all the grim reasoning of a historian determined to clear the name of Richard III, to expunge the mystery from the good doctor's peripatetic battle wound (“Leg? Shoulder? Which was it, man?”). I speak instead of the greater population who can't walk a hundred yards in any direction without tripping over some reference to Holmes and Watson.

In their own time, their distinctive profiles hung from staples outside public-houses, decorated snuff boxes, sold candy, crackers, cigarettes, men's hosiery, razors, and root beer. Nearly a century before “product placement,” the culture we now call Madison Avenue had jumped the gun by exploiting fiction to sell widgets. (The practice continues to this day: although just what Mycroft's kid brother has to do with housing development in the American suburbs is one for “Sherlock
Homes
.”)

Where fame leads, satire follows. Holmes and Watson were swiftly lampooned by Conan Doyle's (perhaps) jealous colleagues. Maurice Leblanc's “Holmlock Shears” (who bungles an attempt to nab master criminal Arsene Lupin) may have been the first, appearing even as eager readers awaited the next Holmes story by Conan Doyle, but it was by no means the last. Since then, we've had Schlock Homes, Solar Pons, Basil of Baker Street (a mouse cohabiting at 221B), and hundreds of others, including a gaggle of Doorlocks, Hemlocks, Sheerlucks, Hardlucks, Dumblucksâand six delirious minutes with Daffy Duck, complete with deerstalker and curve-stemmed pipe (with Porky Pig's Watson at his side), hot on the trail of the “Shropshire Slasher” in the Looney Tunes classic, “Deduce, You Say!” (Daffy was a latecomer: In 1924's
Sherlock, Jr.
, Buster Keaton stepped literally from the audience up onto the silent screen to usurp the role of his heroâsixty years before Jeff Daniels escorted Mia Farrow into
The Purple Rose of Cairo
.)

Other imitations have been less than forthcoming about their source. As deep a footprint as Dame Agatha Christie made in the development of the detective story, her short fiction featuring Hercule Poirot relies suspiciously upon the Doylean template: a gifted amateur detective rejecting all but the most outrÃ© problems to challenge his intellect, while his retired British military housemate records the circumstances for the reading public. But then, I've written elsewhere about the debt Holmes owed to Edgar Allan Poe's C. Auguste Dupin, so I point the finger with mercy.

I've been unable to determine just how Conan Doyle felt about all this apery, but by the time it reached crisis point, he'd gone sour on Holmes and declined to discuss him even in private. (When he finally relented, in an interview filmed shortly before his death in 1930, he spent much of his time denigrating Watson's intelligence; writers are not immune to the influence of bastardizations of their own work. Poirot's Captain Hastings, for instance, makes the good doctor look like Stephen Hawking.)

To call the original “pervasive” would be to state what must be obvious even to the bumbling Watson of silver-screen slander. Try to think of another figure, fictional or actual, from the Victorian period whose very name is as cutting-edge as this week's hip-hop slang: When it looked as if my
Sherlock Holmes vs. Dracula
might be adapted to film (with Pierce Brosnan and Alexander Gudunov suggested as the leads), I had to plead with the screenwriter to strike “No shit, Sherlock!” from the Count's dialogue.

The creators of
Elementary
and
Sherlock
, two currently popular TV series that bring our favorite detecting duo into the present century, were faced not only with the challenge of familiarizing Holmes with cell phones and DNA, but also of overcoming audience disbelief when characters learn his name and act as if they'd never heard it before; really, it's like the entire case of a western saying, “Wyatt
who
?” A society with no awareness of Sherlock Holmes borders on
The Twilight Zone
. (
The Godfather III
suffered from the same dichotomy, with characters inhabiting an alternate 1970s in which “I'll make him an offer he can't refuse” has not been hardwired into the culture.)

In this climate, it's difficult to picture Conan Doyle's own failed experiments in christening his most famous creation. Not for him, he said later, to be so blatant as to resort to “Hawk” or “Sharps.” If the writer's scrawl on a surviving scrap of paper is to be accepted as evidence, literature's favorite duo would have been knownâor more likely unknownâby names that resound like plug nickels. Fortunatelyâciting Conan Doyle againâhe fondly recalled drubbing an opponent named Sherlock at cricket sometime in his past. Would Scarlett O'Hara be the vixen we remember had Margaret Mitchell stuck with “Pansy,” and
The Great Gatsby
as haunting had F. Scott Fitzgerald insisted upon
Tremalchio in East Egg
? Holmes said it best: “There is nothing so important as trifles.”

Ironically, we need not hear or read the name to recognize the man. The aquiline profile, the (non-canonical) fore-and-aft cap and curved-stem pipe, the magnifying glass held close to the face are sufficient. As much as we owe this image to illustrators and actors, the relationship with the character in the stories is deeply rooted; those who approach them with preconceived notions are rarely shocked or disappointed. Sir Laurence Olivier's performance in the classic film notwithstanding, ten readers of Emily BrontÃ«'s
Wuthering Heights
will come away with ten different pictures of Heathcliff; and don't let's get started on whether Johnny Weissmuller or Buster Crabbe was the best Tarzan, or was Sean Connery or Daniel Craig the James Bond that Ian Fleming intended. Fists have flown over less. But surely everyone in the civilized world (and most in the undeveloped one) could pick Sherlock Holmes out of a police lineup. We can't escape him, although why we should try is a mystery only he could clear up.

With apologies to Baroness Orczy and Percy Blakeney (and to the skills of the authors whose work follows this preface), I offer the following doggerel:

We see him here, we see him there,

Our world sees him everywhere.

The Adventure of the Two Collaborators

The Adventure of the Dying Ship

Excerpt from
The Insidious Dr. Fu-Manchu

How Watson Learned the Trick

The Adventure of the Unique
Hamlet

The Adventure of the Red Widow

The Mysterious Case of the Urn of ASH; or, What
Would Sherlock Do?