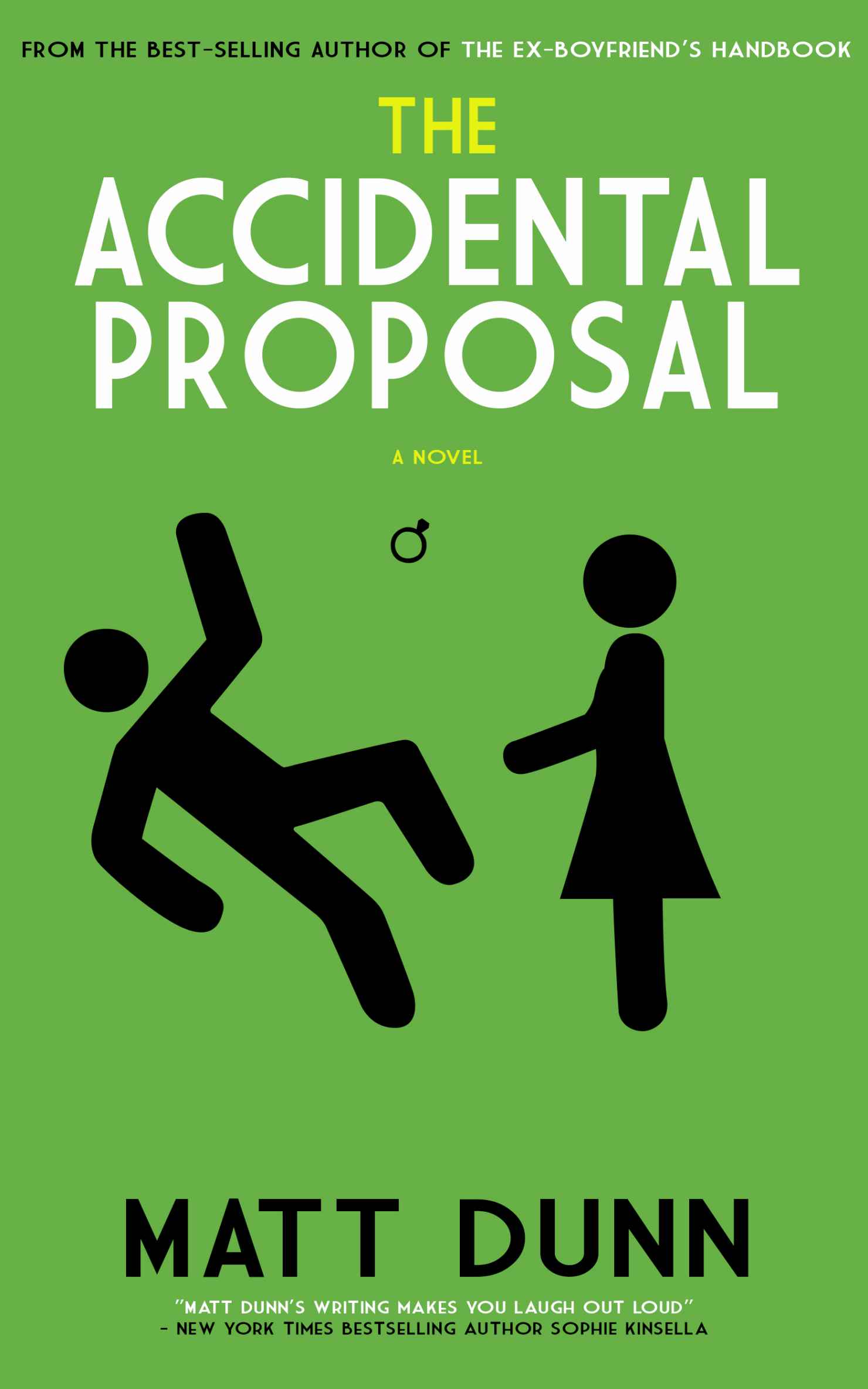 'Funny and witty, a great read that gives us a look into the workings of the male mind' – The Sun

'Funny and sweet, this is a quirky glimpse into the mind of a bloke' – Woman

'A brilliantly amusing insight into the male psyche' – Closer

'An amusing insight into the minds of men' – Daily Express

'Both hilarious and touching' – Best

Matt Dunn is the author of seven novels, including the Amazon UK top ten bestseller A Day At The Office, and The Ex-Boyfriend's Handbook, which was shortlisted for both the Romantic Novel Of The Year Award and the Melissa Nathan Award for Comedy Romance. He's also written about life, love, and relationships for various publications including The Times, Guardian, Glamour, Cosmopolitan, Company, Elle, and The Sun. Previously, he's worked as a professional lifeguard, fitness-equipment salesman, and most recently, an I.T. head-hunter (where his success in re-writing other people's résumés made him think he might have a talent for fiction), but he prefers writing novels for a living, so please buy his other books!

From Here To Paternity

A Day At The Office

This book is copyright under the Berne Convention.

No reproduction without permission.

The right of Matt Dunn to be identified as author of this work has been asserted by him in accordance with sections 77 and 78 of the Copyright, Designs and Patents Act, 1988.

This book is a work of fiction. Names, characters, places, and incidents are either a product of the author's imagination or are used fictitiously. Any resemblance to actual people living or dead is entirely coincidental.

‘I’m sorry, Edward.’ Dan frowns, then places his beer bottle carefully on the bar in front of him. ‘What’s “re-dancing”?’

‘No, Daniel,’ I say, as if explaining something to a five-year-old – a tactic I have to employ surprisingly often where Dan’s concerned. ‘I said, “some Scottish country dancing”. Not . . . Well, not what you thought, anyway.’

As is customary every Sunday evening, Dan and I are sitting at the bar of our favourite Brighton pub, the Admiral Jim. I’m telling him about the wedding that my girlfriend Sam and I went to yesterday, while nervously waiting for the right moment to mention one that he might be invited to – and as my best man – but, as is usual whenever I try to steer the conversation away from the superficial world that Dan inhabits, he’s not making it easy for me.

‘Tell me about them.’ Dan pokes the wedge of lime further down the neck of his bottle with his index finger. ‘In fact, why anyone wants to get married is beyond me.’

‘There are a lot of things that are beyond you, Dan. Fidelity, an IQ score in double figures . . .’

Dan removes his finger from the bottle and sucks the lime juice off it, childishly sticking the finger next to it up at me at the same time. ‘I mean, for one thing, getting married increases your chances of splitting up, doesn’t it?’

I put my pint of lager down and swivel on my stool to face him. ‘I realize I might regret saying this, but I’m going to have to ask you to explain that one.’

‘Simple,’ says Dan, although I presume he’s referring to his forthcoming explanation rather than me. ‘What’s the current divorce rate?’

I let him struggle with the maths for a moment, then put him out of his misery. ‘Sixty-six and two thirds.’

‘Partly due to the amount of married women who throw themselves at you, no doubt.’

He opens his mouth to challenge me, then realizes he doesn’t have a leg to stand on, so instead, just makes the ‘what can you do?’ face. Dan, it has to be said, is ridiculously good-looking; although at a shade under six feet tall he’s slightly shorter than he’d like. Everything else about him – from his uncommonly white teeth, gym-honed physique, the tan he keeps topped up at Tan-Fastic on the High Street, and his immaculately styled and highlighted (although he denies the last bit) hair – evidently combines to make him what I believe is known as a ‘babe-magnet’. In fact, on the odd occasion he and I have been out clubbing, I’ve seen women so keen to sleep with him that they literally trample over each other – and me – like it’s the first day of the sales.

‘Whereas,’ he continues, ‘with you and Sam, all the while you’re girlfriend and boyfriend, you’ve only got two options: either you stay together, or you don’t, right?’

‘So that means there’s a fifty per cent chance of you splitting up. Or not.’

‘Which is less than if you get married,’ he concludes, gesturing towards me with his beer bottle, then dabbing at the spot of beer he’s just splashed down the front of the ironically vintage ‘sex and drugs and sausage rolls’ T-shirt he’s wearing under his leather jacket. ‘Proves my point.’

‘Obviously,’ says Dan, as if I’m the slow one, ‘that it’s better not to get married if you want to stay together.’

For a moment, I consider trying to explain exactly where his theory falls down, but realize the pub’s due to close in three hours. Besides, there’s something more important I need to talk to him about.

‘Well, that’s a shame. Particularly where Sam and I are concerned.’

I grin guiltily at him. ‘Why do you think?’

As I wait for the grey mush that passes for Dan’s brain to process what I’ve just said, it’s hard to read his expression, although that’s probably due to the fact that even though we’ve been sitting here for the best part of half an hour, he’s still wearing the cap and sunglasses disguise he hardly ever leaves home without nowadays. Dan’s a bit of a celebrity, having made his name as the presenter of the housewives’ and students’ favourite daytime antiques programme
Where There’s a Will
and, up until recently, playing the part of Wayne Kerr in
Close Encounters
, ITV5’s popular soap opera set in a cul-de-sac here in Brighton. At the moment, however, he’s ‘resting’, although it’s something of an enforced rest, having been sacked as Wayne after a disastrous appearance on
Children in Need
where he was asked – live – what he liked most in a woman, and he replied ‘my penis’.

‘You’re joking, Edward,’ he says, after the best part of a minute.

‘I’ve never been more serious. Both about what I’m saying, and, you know, Sam.’

Dan removes his cap slowly, followed by his Ray-Bans, but for once doesn’t automatically check his hairstyle in the reflection of the lenses. ‘You’ve asked Sam to marry you?’

‘Well . . .’ I shift uncomfortably on my seat, wondering whether I should tell him the actual story, but he doesn’t give me a chance.

‘What does it matter? The important word is yes.’

‘Not necessarily,’ says Dan, gravely. ‘The “of course” part might suggest that she’s doing it out of some misplaced sense of duty, whereas . . .’ He stops talking and scowls at me, possibly because I’m repeating the words ‘la, la, la’ over and over again with my fingers stuck in my ears. ‘Very mature, Edward,’ he says, when I’ve eventually finished.

‘Stop over-analysing everything and just congratulate me, will you?’

Dan shrugs. ‘Well, congratulations,’ he says, picking up his bottle of beer again and clinking it against my pint glass. ‘Blimey – you’re engaged. To be
married
.’

‘I guess so,’ I say, conscious that I’m grinning like an idiot. ‘I can hardly believe it.’

‘
You
can hardly believe it?’ Dan shakes his head. ‘I mean, you marrying Sam. It’s like . . .’ He struggles to think of an example. ‘Two years ago, you were at the bottom of the second division. And now . . . you’ve won the European Cup. Talk about a result.’

For a minute I don’t know what to say to that. I suppose it’s a back-handed compliment, given how unfit, unhealthy, untrendy and evidently unattractive I was back then, which led to Jane, my girlfriend of ten years, dumping me, and telling me to sort myself out. I decided to take her advice, and so started taking Dan’s, by losing the weight. Stopping the smoking. Swapping the John Smith’s for Paul Smith. And by finding out what women wanted (although initially, I found out what it wasn’t – me). And while I might not exactly be in Dan’s league, nowadays I could probably pass for his taller, dark-haired, slightly less trendy and athletic cousin in the right light – which Dan would say would be semi-darkness.

‘So, come on.’ He nudges me, causing me to spill some beer on my jeans. ‘What was it like? I mean, how did it feel? When you asked her.’

‘None of your business.’

Dan starts poking me in the ribs. ‘Come on. You can tell me. Your oldest friend.’

‘Okay. I’ll get it out of her instead,’ he says, reaching for the latest of his regularly upgraded iPhones
that he’s positioned in full view on the bar in front of him.

‘Well, at least tell me how you did it. Were you nervous?’

‘Not really?’ Dan narrows his eyes. ‘The man who has zero confidence with women proposed
just like that
, and without the slightest doubt that she might say no?’

Dan stares at me, waiting for the rest of the story. ‘And that was it?’ he says, when I don’t expand.

‘You didn’t get down on one knee? Do all the big romantic stuff?’

I feel myself start to blush. ‘Because I hadn’t really prepared anything. I mean, I would have, if I’d thought about it. But sometimes you’ve got to strike while the iron’s hot, haven’t you? See an opportunity and go for it. Like you’re always telling me – you snooze, you lose. Nice guys finish last, and all that.’

‘Which is a philosophy I subscribe to,’ says Dan, leaning over and nudging me again. ‘Particularly in bed. Where I’m a really nice guy, if you know what I mean.’

Dan grins, then takes another gulp of lager. ‘Hold on,’ he says, eyeing me suspiciously. ‘Something doesn’t ring true here.’

‘What are you talking about?’

‘Well, how long have you been planning this?’

I shrug. ‘I don’t know. I mean, “planning” is such a strong word, isn’t it? Although I suppose I’ve been thinking about it for a while.’

‘And yet this is the first time I’ve heard anything about it.’

I sigh. ‘Dan, I don’t tell you everything I’m intending to do where me and women are concerned.’

‘Which is probably why it’s taken you thirty-one years to get one to agree to marry you.’ He shakes his head. ‘But if you’ve been intending to do it for so long . . .’

‘Why didn’t you do it properly?’

I puff air out of my cheeks. ‘Well, what does “properly” mean, really? Surely the important thing was that she said yes.’

‘No, of course not. How could you say such a thing?’