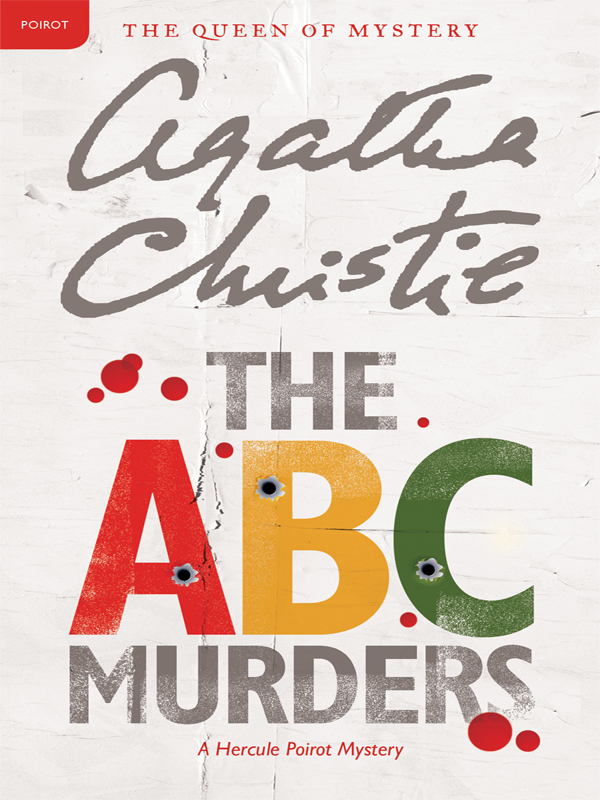 To James Watts
One of my most sympathetic readers

2.
Not from Captain Hastings' Personal Narrative

6.
The Scene of the Crime

16.
Not from Captain Hastings' Personal Narrative

21.
Description of a Murderer

22.
Not from Captain Hastings' Personal Narrative

24.
Not from Captain Hastings' Personal Narrative

25.
Not from Captain Hastings' Personal Narrative

26.
Not from Captain Hastings' Personal Narrative

28.
Not from Captain Hastings' Personal Narrative

30.
Not from Captain Hastings' Personal Narrative

Other Books by Agatha Christie

I
n this narrative of mine I have departed from my usual practice of relating only those incidents and scenes at which I myself was present. Certain chapters, therefore, are written in the third person.

I wish to assure my readers that I can vouch for the occurrences related in these chapters. If I have taken a certain poetic licence in describing the thoughts and feelings of various persons, it is because I believe I have set them down with a reasonable amount of accuracy. I may add that they have been “vetted” by my friend Hercule Poirot himself.

In conclusion, I will say that if I have described at too great length some of the secondary personal relationships which arose as a consequence of this strange series of crimes, it is because the human and personal elements can never be ignored. Hercule Poirot once taught me in a very dramatic manner that romance can be a by-product of crime.

As to the solving of the A.B.C. mystery, I can only say that in my opinion Poirot showed real genius in the way he tackled a problem entirely unlike any which had previously come his way.

One
T
HE
L
ETTER

I
t was in June of 1935 that I came home from my ranch in South America for a stay of about six months. It had been a difficult time for us out there. Like everyone else, we had suffered from world depression. I had various affairs to see to in England that I felt could only be successful if a personal touch was introduced. My wife remained to manage the ranch.

I need hardly say that one of my first actions on reaching England was to look up my old friend, Hercule Poirot.

I found him installed in one of the newest type of service flats in London. I accused him (and he admitted the fact) of having chosen this particular building entirely on account of its strictly geometrical appearance and proportions.

“But yes, my friend, it is of a most pleasing symmetry, do you not find it so?”

I said that I thought there could be too much squareness and, alluding to an old joke, I asked if in this super-modern hostelry they managed to induce hens to lay square eggs.

“Ah, you remember that? Alas! noâscience has not yet induced the hens to conform to modern tastes, they still lay eggs of different sizes and colours!”

I examined my old friend with an affectionate eye. He was looking wonderfully wellâhardly a day older than when I had last seen him.

“You're looking in fine fettle, Poirot,” I said. “You've hardly aged at all. In fact, if it were possible, I should say that you had fewer grey hairs than when I saw you last.”

Poirot beamed on me.

“And why is that not possible? It is quite true.”

“Do you mean your hair is turning from grey to black instead of from black to grey?”

“But surely that's a scientific impossibility!”

“But that's very extraordinary. It seems against nature.”

“As usual, Hastings, you have the beautiful and unsuspicious mind. Years do not change that in you! You perceive a fact and mention the solution of it in the same breath without noticing that you are doing so!”

I stared at him, puzzled.

Without a word he walked into his bedroom and returned with a bottle in his hand which he handed to me.

I took it, for the moment uncomprehending.

It bore the words:

Revivit
.âTo bring back the natural tone of the hair.
Revivit
is
not
a dye. In five shades, Ash, Chestnut, Titian, Brown, Black.

“Ah, the comprehension comes to you!”

“So
that's
why your hair looks so much blacker than it did last time I was back.”

“Dear me,” I said, recovering from the shock. “I suppose next time I come home I shall find you wearing false moustachesâor are you doing so now?”

Poirot winced. His moustaches had always been his sensitive point. He was inordinately proud of them. My words touched him on the raw.

“No, no, indeed,
mon ami
. That day, I pray the good God, is still far off. The false moustache!
Quel horreur!
”

He tugged at them vigorously to assure me of their genuine character.

“Well, they are very luxuriant still,” I said.

“
N'est ce pas?
Never, in the whole of London, have I seen a pair of moustaches to equal mine.”

A good job too, I thought privately. But I would not for the world have hurt Poirot's feelings by saying so.

Instead I asked if he still practised his profession on occasion.

“I know,” I said, “that you actually retired years agoâ”

“
C'est vrai.
To grow the vegetable marrows! And immediately a murder occursâand I send the vegetable marrows to promenade themselves to the devil. And since thenâI know very well what you will sayâI am like the prima donna who makes positively the farewell performance! That farewell performance, it repeats itself an indefinite number of times!”

“In truth, it has been very like that. Each time I say: this is the end. But no, something else arises! And I will admit it, my friend, the retirement I care for it not at all. If the little grey cells are not exercised, they grow the rust.”

“I see,” I said. “You exercise them in moderation.”

“Precisely. I pick and choose. For Hercule Poirot nowadays only the cream of crime.”

“Has there been much cream about?”

“No, no.” Poirot looked shocked. “But Iâ
I, Hercule Poirot,
was nearly exterminated.”

“Not so much enterprising as careless,” said Poirot. “Precisely thatâcareless. But let us not talk of it. You know, Hastings, in many ways I regard you as my mascot.”

Poirot did not answer my question directly. He went on:

“As soon as I heard you were coming over I said to myself: something will arise. As in former days we will hunt together, we two. But if so it must be no common affair. It must be something”âhe waved his hands excitedlyâ“something
recherche
”âdelicateâ
fine
â¦” He gave the last untranslatable word its full flavour.

“Upon my word, Poirot,” I said. “Anyone would think you were ordering a dinner at the Ritz.”

“Whereas one cannot command a crime to order? Very true.” He sighed. “But I believe in luckâin destiny, if you will. It is your
destiny to stand beside me and prevent me from committing the unforgivable error.”

“What do you call the unforgivable error?”

I turned this over in my mind without quite seeing the point.

“Well,” I said presently, smiling, “has this super crime turned up yet?”

He paused. A frown of perplexity creased his forehead. His hands automatically straightened an object or two that I had inadvertently pushed awry.

There was something so odd about his tone that I looked at him in surprise.

Suddenly with a brief decisive nod of the head he crossed the room to a desk near the window. Its contents, I need hardly say, were all neatly docketed and pigeonholed so that he was able at once to lay his hand upon the paper he wanted.

He came slowly across to me, an open letter in his hand. He read it through himself, then passed it to me.

I took it from him with some interest.

It was written on thickish white notepaper in printed characters:

Mr. Hercule Poirot,âYou fancy yourself, don't you, at solving mysteries that are too difficult for our poor thick-headed British police?
Let us see, Mr. Clever Poirot, just how clever you can be. Perhaps you'll find this nut too hard to crack. Look out for Andover, on the 21st of the month.

I glanced at the envelope. That also was printed.

“Postmarked WC1,” said Poirot as I turned my attention to the postmark. “Well, what is your opinion?”

I shrugged my shoulders as I handed it back to him.

“Some madman or other, I suppose.”

“That is all you have to say?”

His tone was grave. I looked at him curiously.

“You take this very seriously, Poirot.”

“A madman,
mon ami,
is to be taken seriously. A madman is a very dangerous thing.”

“Yes, of course, that is trueâ¦I hadn't considered that pointâ¦But what I meant was, it sounds more like a rather idiotic kind of hoax. Perhaps some convivial idiot who had had one over the eight.”

“Nothingâjust an expression. I meant a fellow who was tight. No, damn it, a fellow who had had a spot too much to drink.”

“
Merci,
Hastingsâthe expression âtight' I
am
acquainted with it. As you say, there may be nothing more to it than thatâ¦.”

“But you think there is?” I asked, struck by the dissatisfaction of his tone.

Poirot shook his head doubtfully, but he did not speak.

“What have you done about it?” I inquired.

“What can one do? I showed it to Japp. He was of the same opinion as youâa stupid hoaxâthat was the expression he used. They get these things every day at Scotland Yard. I, too, have had my shareâ¦.”

“But you take this one seriously?”

“There is something about that letter, Hastings, that I do not likeâ¦.”

In spite of myself, his tone impressed me.

He shook his head, and picking up the letter, put it away again in the desk.

“If you really take it seriously, can't you do something?” I asked.

“As always, the man of action! But what is there to do? The county police have seen the letter but they, too, do not take it seriously. There are no fingerprints on it. There are no local clues as to the possible writer.”

“In fact there is only your own instinct?”

“Not instinct, Hastings. Instinct is a bad word. It is my
knowledge
âmy
experience
âthat tells me that something about that letter is wrongâ”

He gesticulated as words failed him, then shook his head again.

“I may be making the mountain out of the anthill. In any case there is nothing to be done but wait.”

“Well, the 21st is Friday. If a whacking great robbery takes place near Andover thenâ”

“Ah, what a comfort that would beâ!”

“A comfort?”
I stared. The word seemed to be a very extraordinary one to use.

“A robbery may be a
thrill
but it can hardly be a comfort!” I protested.

“You are in error, my friend. You do not understand my meaning. A robbery would be a relief since it would dispossess my mind of the fear of something else.”