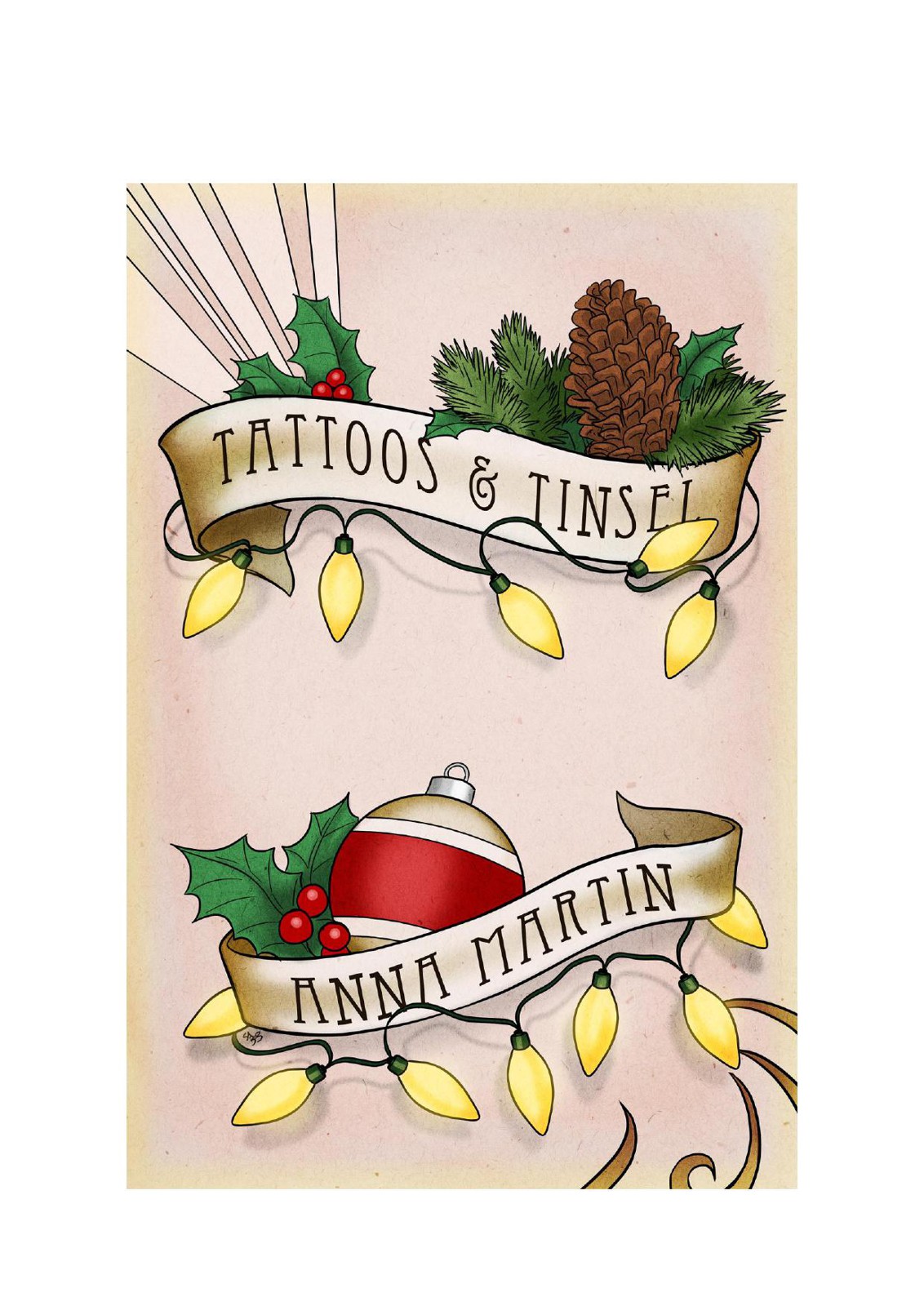 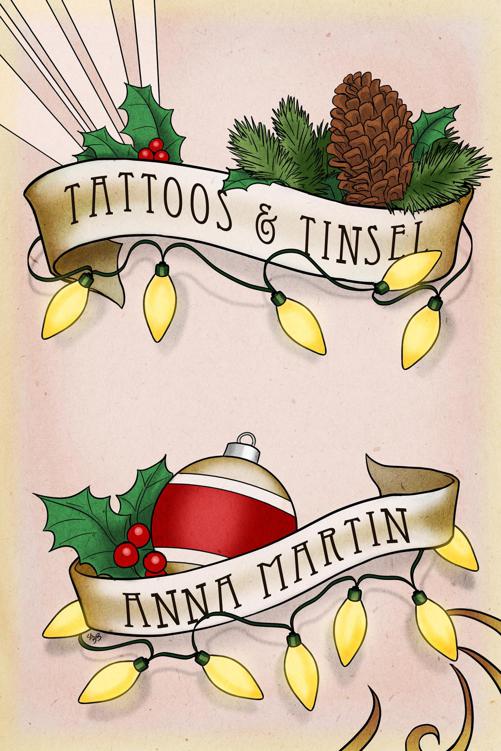 Characters used courtesy of, and with the permission of Dreamspinner Press

All rights reserved. No part of this book may be reproduced or transmitted in any form or by any means, electronic or mechanical, including photocopying, recording, or by any information storage and retrieval system without the written permission of the Publisher, except where permitted by law.

This is a free ebook available f
rom www.annamartin-fiction.com

Firstly I’d like to thank Dreamspinner Press for their support of my releasing another story with my characters from Tattoos & Teacups. That novel was, and still is, very close to my heart and it was a joy and an honor to write more of Rob and Chris’s story.

Thank you to Christine, who edited, and the ever fabulous Bob for creating yet another stunning cover. Thank you, too, to all the readers who supported

Tattoos & Teacups and made the telling of this story possible.

before creeping through to the kitchen. Chris caught sight of me

anyway, but didn’t stop his loud, out of key wailing.

“I don’t think those are the actual words, darling,” I told him as I

leaned in for a kiss, delivered it to the tip of his nose, and held up my canvas bag triumphantly. “Ham joint, fresh from the butcher.”

“Excellent,” he said. “I’ve just made room for it in the fridge.”

the two of us for Christmas, we had a huge amount of food. I stuffed

he was busy assembling something else on the counter. Despite my

best efforts to hide or burn his hideous jumper, he was still wearing

hands, leaning my chin on his shoulder to watch what he was doing.

“What are you making?”

“Your nose is cold, Rob,” he complained as I nuzzled it into the side

of his neck. “There are sugar cookies in the oven and I’m trying to

make mince pies. I found a recipe online and thought I’d give it a go.”

“They look good so far,” I said, reaching around him and poking my

finger into the mix of dried fruit, suet, sugar and alcohol he was

carefully stirring. I licked my finger, hummed in approval and gave

determined to make it special. There had been invitations from family

and friends to spend the holiday with them, and after careful

consideration, I’d politely declined them all in favor of locking myself

away with Chris and spending the day alone with him.

We made a trip down to Florida for Thanksgiving, my first chance to

meet in person Chris’s mother, a woman whom I spoke with nearly

every week on the phone. With five children and five grandchildren

(so far), she and Chris’s father didn’t have many opportunities to

travel up to Boston to see us. I’d been wary at first, aware of how my

own parents were uncomfortable around any discussion of my

sexuality. But Betty-Sue Ford had treated me as family from the

beginning; apparently she was not at all bothered that her son had a

male partner rather than a female one, or that I was nine years older

After all, none of that mattered to us.

Chris’s family were completely opposite to my own; a big, tumbling,

noisy, messy group of people who talked over each other, argued

good-naturedly and laughed so much. It took much less time than I’d

expected for me to fit right in.

Being Scottish, my own family didn’t celebrate Thanksgiving and

made more of a fuss around the big Christian holidays. For that reason

I could see the trips to Florida in November becoming a regular thing.

just get into the holiday spirit, he flung himself face first into it and dragged along with him anyone who might be looking slightly less

than cheerful. I had managed to reign him in with most of the

decorating in our apartment, coming to an agreement that downstairs,

the decorations would be limited to a tasteful display of glittering

lights on the hallway table. Upstairs, he turned into a sparkling,

The whole of our living room area, which was on the top floor of the

building, was covered in lights and assorted Christmas décor. The tree

covered in fairy lights, decorations hung from the ceiling, tinsel was

draped on any surface that could support tinsel-drapery, baubles and

candy canes and twinkly lights and fake snow on the windows. It was

gaudy. It was horrific.

So I loved it.

While he continued to bake and sing along to the radio, I grabbed my

breakfast bar, away from his floury hands. Despite the fact that

Christmas break was well underway, I still had the occasional student

sending me an email asking for advice or help with assignments. If I

I wasn’t paying much attention to what Chris was doing, although I

oven and his cookies were set out to cool. He seemed to be done, for

It didn’t take long for him to do the few dishes and put the kettle on to boil, making a pot of the Christmas coffee I’d picked up that week

when doing our grocery shopping.

“Thanks,” I said as he handed me a mug, hot and strong, as I liked it.

conversation. Being with Chris was just easy.

I’d already finished wrapping up most of our gifts, but apparently

Chris had done some last minute shopping without me. After dinner

he spread himself out on the floor in the living room with paper, bows

and confetti to wrap into the layers.

I left him to it, occasionally providing a finger to hold a bit of paper in place before he taped it, and watched the TV while sprawled out on

the sofa. The gift-exchanging celebration with our family and friends

would happen on Boxing Day, a tradition I’d brought with me from

Scotland which Americans did not seem to share. It originated from

the times when people still had servants; on the day after Christmas

master of the house. The day was a public holiday in Britain and we

were going to celebrate by inviting almost everyone we knew to

spend the day with us.

For me, the most important part of the holiday would be spending it

with Chloe. In the past year my daughter and I had continued to grow

closer, mostly due to Chris’s intervention. She had turned fifteen over

the summer and was beginning to mellow and mature, something I

was intensely relieved at.

She was going to be coming over with her mother, Luisa, who was

accidentally knocking her up when we were eighteen), her step-father,

Mike and her younger siblings with whom Chris was hopelessly in

love (an emotion that was reciprocated by the children in question).

and Lexi, who’d just welcomed baby Ruby into their family and my

sister Jilly. My friends Adam and Marlene were also coming along,

with their children. Needless to say, with the number of people we

were expecting, we had bought in extra food for the occasion.

pulled Chris up onto the sofa and into my arms, where he settled back

against my chest. The only lights in the room came from the glow of

the TV, the twinkling of the tree in the corner, and the soft warmth of

the fire across the room. I hadn’t pulled the heavy curtains over the

windows to stop the head escaping even though I knew I should.

There was something about these long winter nights that I absolutely

loved; being warm inside while looking out into beautifully clear

nights, when all the stars were visible, or the sky dark, heavy and

Chris sighed and turned his head against my chest, tilting his head up

so he could kiss my chin. Even after the year or more that we’d been

together, he still had a way of making my stomach flutter with lust,

“Need to go to bed soon,” he said, pointing to the clock which read

I laughed and wrapped my arms around him, pressing a kiss to the

crown of his head.

We made short work of the task; the decorations had been up for

when switching the lights off. Chris bolted the front door and I

checked that my grumpy cat, Flea, was inside before falling into bed.

in the living room. Chris snuggled into my chest, tangling our legs

together with the comforter pulled up high on our shoulders. For a

few minutes all I could hear was his deep breathing, he then hummed

low in his chest and turned to seek out my kisses.

I wasn’t surprised that he wanted this – to be fair, he always wanted

this. Chris used sex as a way to connect, to share something beautiful

and intimate that belonged to only us. Before I’d met him I wasn’t a

particularly sexual person, but he’d drawn that out of me to a point

where I was confident enough to be myself and enjoy my sexuality.

For tonight, he positioned his body on top of mine, aligning our chests

and wanting cocks and held himself there as we exchanged soft,

delicate kisses. Our lips rubbed together and his tongue gently flicked

side of my neck.

lips to my skin, over and over. His hair still faintly smelled of the

The Battle of Britain by Richard Townshend, Bickers
No Good Reason by Cari Hunter
Munson: The Life and Death of a Yankee Captain by Marty Appel
Deathwatch by Dana Marton
Blood in the Snow, Blood on the Grass by Douglas Boyd
Intervention by Robin Cook
Alexander, Kortny - Come and Get Me [Whispering Mountain 3] (Siren Publishing Ménage Amour) by Kortny Alexander
Dead Man's Hand by Pati Nagle
Kasey Michaels by Escapade
Bloodstone by Gillian Philip