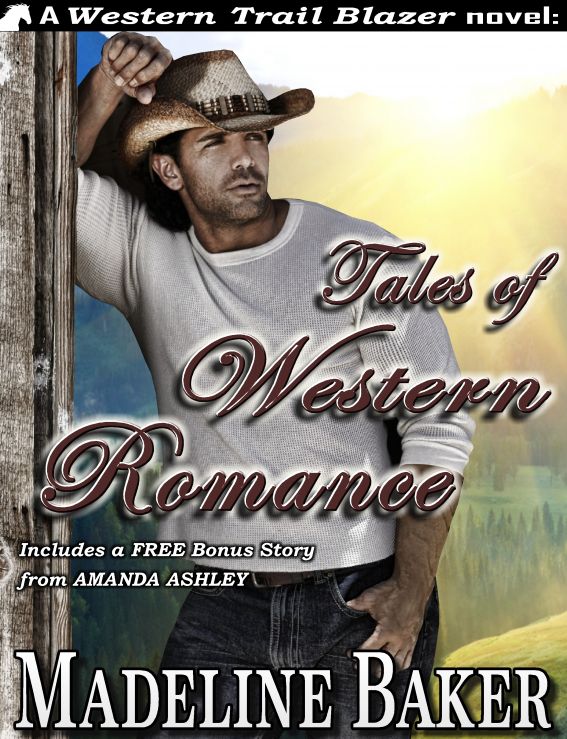 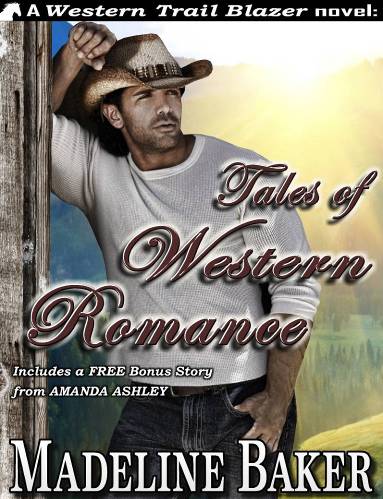 This ebook is licensed for your personal
enjoyment only.

This ebook may not be re-sold or given away
to other people. If you would like to share this ebook with other
people, please purchase an additional copy for each person. If you
are reading this ebook without purchasing it and it was not
purchased for your use only, then please return to Smashwords.com
and purchase your own copy.

Thank you for respecting the hard work of
this author.

The stories in
Tales of Western
Romance
are works of fiction. Though the names of actual
locations may be included, they are used in a fictitious manner and
the events and occurrences were invented in the mind and
imagination of the author, except where actual historical facts are
related. Similarities of characters within to any person, past,
present, or future, are coincidental, except for the inclusion of
actual historical figures.

Catch the Lightning
– In
this sequel to
Chase the Lightning,
the legendary white
stallion
Relampago
carries a suicidal woman back through
time to help a wounded man.

Capture the Lightning
– A
woman on vacation at a dude ranch becomes lost in a storm and is
rescued by
Relampago
. But it seems the cabin he returns her
to is far from the one she left, in time that is...

Passion's Promise
– An
Indian maiden in charge of a prisoner must fulfill her duties, then
watch him die at the hands of her people. Or does fate have other
plans?

Reckless Destiny
– Daniel
Blue Hawk yearns for the old days and succeeds in traveling back in
time. Will a woman, a tribe of Cheyenne, and unknown danger change
his life forever?

Ms. Baker hopes you enjoy the free story she
has included

The Music of the Night 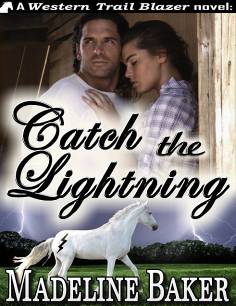 Macie Jenkins decides her life isn’t worth
living only to be transported through time on the back of a
legendary white stallion.

The horse takes her to a wounded man, Ace
Bowdry, who needs her help.

Will Macie find something,
or someone,
worth living for after all?

The great white stallion grazed on a patch of
sun-warmed prairie grass, long white tail swishing an errant fly.
The Apache called him a spirit horse; the Cheyenne called him a
ghost horse because of his pale color. But
Relampago
was
both, and neither. For hundreds of years, he had wandered the
shadowy path between the past and the present, saving countless
lives, bringing lost souls together.

Ears pricked forward, the stallion watched
the old man and the boy stroll toward him.

“
Is that him?” the boy asked, pointing.
“Is that the spirit horse?”

“
Tell me the story,
grandfather.”

“
You have heard it many times
before.”

“
Yes, but I’ve never
seen
the
ghost horse,” the boy said, excitement evident in his tone and in
the way he hopped from one foot to the other. “Tell me
again.”

Smiling indulgently, the old man began. “It
started in a time long ago when one of our brave warriors went out
to face his enemies. Surrounded by the bodies of his slain
comrades, he lifted his war lance high overhead, his death cry
riding on the wings of the wind as he waited for death to find
him.

“
His enemies laughed and made rude
gestures at him. They were certain the warrior would die that day.
That when night came, they would sing of the Apache’s death while
they danced, his scalp and those of the other slain Apaches
dangling from their scalp poles.

“
The Apache warrior watched his enemies
impassively as he chanted softly, his prayer for deliverance
wending its way up to the Great Spirit, even as the warrior set his
face toward death. ‘Hear me,
Usen
, grant me courage that I
may die well.’

“
As he prayed, a sudden stillness fell
over the land. The wind moaned through the tall prairie grass.
Curling fingers of thick gray mist rose up from the
ground.

“
The Apache warrior fell silent.
Glancing over his shoulder, his eyes narrowed as he saw a stallion
emerge from the gathering mist.”

The old man nodded. “The very same. The
stallion’s hooves echoed like thunder, striking lightning from the
earth as it galloped toward the warrior. Sunlight danced over the
stallion’s dazzling white coat, glinting like liquid silver in its
flowing mane and tail. A thin black scar, shaped like a bolt of
lightning, adorned its right flank.

“
The warrior’s enemies fell back in
superstitious awe as the ghost horse approached, but the Apache
warrior stood his ground. The eagle feathers tied in his hair
fluttered in the rising wind.

“
The stallion slowed as it drew near
the warrior, then stopped to paw the ground. Grasping the
stallion’s mane, the warrior swung onto its back, and with a wild
cry, he and
Relampago
rode through the midst of their
enemies toward freedom and into myth and legend.”

“
But
Relampago’s
not a myth,”
the boy said. “He stands here before us.”

The old warrior smiled. “He is here today.
Tomorrow, he may be gone.”

It was eleven a.m. on a rainy Saturday
morning in January when Macie Jenkins decided her life was no
longer worth living. Her parents and younger sister had died in an
automobile accident six months ago. Her best friend in the whole
world had married a computer programmer and moved to Japan. Her
boyfriend left her for his secretary. Last month, the Collie she’d
had ever since she was a little girl had gotten lost in a thunder
storm and never returned. Last week, she lost her job due to the
ongoing economic slump. And this morning, she found her two-year
old goldfish belly-up in the tank. It had been the last straw.

With a shake of her head, Macie turned away
from the living room window. Now that the decision was made, she
felt a curious sense of peace. How to do it, that was the question?
A knife was too messy. She didn’t own a gun. Sitting in the garage
with the engine running seemed too creepy… Sleeping pills, of
course—that was the best way. A handful of pills and she would just
fall asleep, leaving no messy corpse behind. And how fortuitous
that she’d had her prescription refilled just yesterday.

Tomorrow,
she thought, she would do it
tomorrow. But today, ah, today she would indulge in all the things
she had been avoiding. She would have a big bowl of warm chocolate
pudding topped with a banana for breakfast. A Big Mac, fries, and a
chocolate malt would make a perfect lunch, and for dinner, pasta
and garlic bread, with a pint of decadent chocolate fudge brownie
ice cream for dessert.

While stirring the pudding, Macie
contemplated leaving a suicide note, and decided against it. No one
she knew would really care why she had done it; most wouldn’t even
realize she was gone.

When the pudding was cool, she poured all of
it into a large bowl, sliced a banana on top, then sat at the
kitchen table and savored every deep rich bite. Good thing she was
dying tomorrow, she thought with a wry grin, since she had just
shot her diet all to hell.

She spent the next hour finishing the book
she was reading, then she cleaned her house from top to bottom.
After all, she didn’t want whoever found her body to think she
lived like a slob.

Lunch was pure heaven. The cheeseburger was
perfection itself, smothered in cheese and onions. She lingered
over every French fry, even the little crusty ones at the bottom of
the bag. The chocolate shake was a creamy delight.

While fixing dinner, she listened to her
favorite Fifties oldies. When dinner was ready, she lit a fire in
the fireplace and ate in the living room while watching
MASH
reruns. She grinned ruefully as she savored every bite of
spaghetti. Six months of hard work at the gym, wiped out in a
single day.

By seven, the rain turned into a thunder
storm. Lightning slashed the skies, thunder rocked the heavens, a
ferocious wind rattled the doors and windows. She had always loved
a storm. What better way to spend her last night than out walking
in the rain? One thing for certain, she wouldn’t have to worry
about catching a cold.

After pulling on her favorite Grumpy
sweatshirt and an old pair of cowboy boots, she went outside. For a
moment, she just stood there, her face lifted to the lowering
skies. Was anyone up there? Was there life after death? Were her
parents waiting to greet her on the other side, or was death the
end of everything?

Tomorrow,
she thought. She would know
the answer tomorrow. She shoved her hands into the pockets of her
jeans and then, with no particular destination in mind, she started
walking. It was kind of spooky, strolling along in the dark with
the storm raging overhead. She glanced over her shoulder from time
to time, making sure the lights from the house were still in
sight.

A flash of lightning split the iron-gray
skies, disclosing a…What was that? Macie stared at the shape that
seemed to be emerging from the clouds. Was that a horse, she
thought, startled, and then laughed out loud.

“
You’re losing it, Macie,” she
muttered, and let out a yelp when her feet suddenly went out from
under her and she found herself falling head over heels down a
muddy slope.

A shrill cry rose in her throat, ending in a
groan as she slammed into a boulder at the foot of the hill.

And then everything went black.

Cold and wet, Macie woke with a groan. For a
moment, she simply lay there, her eyes closed against the pain, her
whole body aching. Why was she so sore, she wondered, and then, in
a rush, it all came back to her. She had fallen down the hill at
the far end of the property. If she had any luck at all, she
thought glumly, the fall would have killed her.

The Rescued by Marta Perry
How (Not) to Fall in Love by Lisa Brown Roberts
How To Build The Perfect Rake by Kate Harper
Cold Moon Rising by Cathy Clamp
Avian (The Dragonrider Chronicles) by Nicole Conway
Dark Places by Gillian Flynn
Ian's Rose: Book One of The Mackintoshes and McLarens by Suzan Tisdale
The Blade Itself by Marcus Sakey
The Lost Girl by Lilian Carmine
Running Scarred by Jackie Williams