Read Taking It All Online 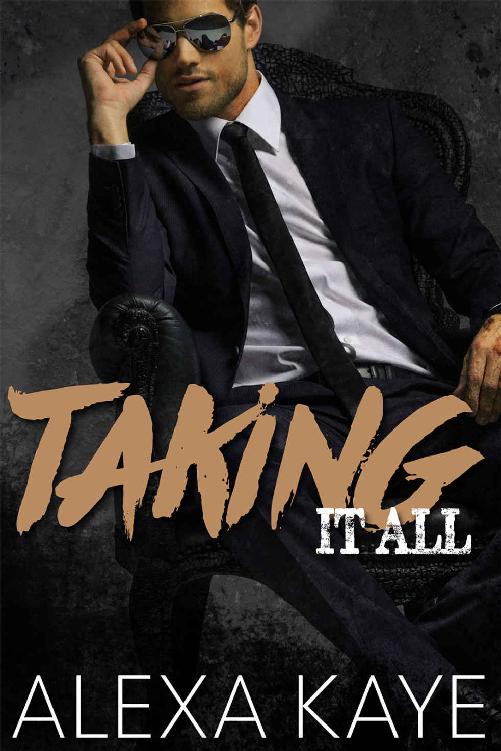 The first time I saw her I knew she was mine.
I have everything I want. That's the life of a billionaire. I see. I want. I get. So, of course, when the woman of my dreams—the fiery redhead with the face of an angel and balls of steel—comes stomping into my world, I take action. I know how to get things done.
She may hate me for stealing her away. But a man has to do what a man has to do. Just like I'm going to take it all—everything she has to give. Including the one thing she's never given another man.

And in return I'll give her even more. The life she deserves. Children...

My heart and soul.

Mine. Jordan is mine.

And I am hers.
Warning:
Open this book and escape into a world where a billionaire (with a to-die-for body, of course) falls in love in an instant and sweeps his (lucky) woman off her feet...and into the life of her dreams! But be warned--this (dirty) uber-hot, sticky-sweet story of (totally ridiculous) insta-love and baby-making may inspire you to wake your partner, climb on board, and
get things done
yourself.

Ah, the power of fiction...

Please, please, PLEASE support Alexa and help keep her books in KindleUnlimited! If you borrow her books, PLEASE click through to the end of the book so she is paid for your borrow! Alexa isn’t trying to get rich. She merely would like to stay in KindleUnlimited without going bankrupt. Sadly, internet marketers (aka, scammers) are taking advantage of KindleUnlimited’s pay-by-the-page payment system, making it increasingly hard for REAL authors to earn a living wage.

You can help! When you borrow a real book by a fave author,
click through the whole book
even if you don’t read it. Without your support, a lot of authors (Alexa included) will be forced to quit publishing on Amazon, in search of other avenues of income just to feed their families.

But I don't really give a shit. They're just numbers.

It wasn't always that way. I didn't used to take dollars for granted. Or quarters. Or even pennies. That's because once upon a time I had to work my ass off to earn every single one.

But then I learned how to make them multiply. Game changer.

Did all those dollars make me a happier man? Sure, at first. I could buy anything I wanted.

But not love. Nope. That's the one thing it can't buy. Oh, that and immortality, of course.

Lest you think I'm whining, I'm not. My life is fucking great. I am, for the most part, a happy man. But there is something missing in my life. And I know what it is. I just don't know what to do about it.

“Earth to Parker. What the fuck is wrong with you tonight?”

Shit. I was so wrapped up in my thoughts I'd forgotten where I was. At the club. With my friend Colbe. Having after-work beers and dinner. “Sorry. Just thinking.”

“When aren't you thinking? You do too much thinking if you ask me. Way too much.” He points at me with his bottle. “If you want my advice, you need to stop thinking.”

Colbe knocks back another shot. “This shit helps. Take my word for it.” He waves, summoning the bartender. “You need another drink.” He points at my empty shot glass and beer bottle.

“I don't need another drink,” I tell him.

“Of course you do.” To the bartender, he waves a pair of fingers, “Two more, please.”

The bartender jerks a nod, plops down a couple of shot glasses on the bar and fills them with Jager before running off to take his next order.

Colbe snatches up one of the glasses, raises it to me in a toast, and dumps the contents down his throat without waiting for me to toast him back. “Damn, that's delicious.” He swivels around in his stool, facing away from the bar. “Well, what do you know? The Bitch is here. Wonder what she's doing here?”

“The Bitch?
That
bitch?” I ask, referring to the woman Colbe is always whining about.

Normally I wouldn't care to know anything about her. But any woman who could get Colbe fired up was worth at least a small measure of curiosity.

“Oh fuck!” Colbe says, laughing as I swivel around to find The Bitch. “She just fucking clocked that dude.”

Punched? A woman punched a man?

Okay, maybe in some places that wouldn't be such a remarkable occurrence--like, a Detroit biker bar. But here, in the Lakeview Golf Club's clubhouse, I doubt there's been a whole lot of punches thrown. By men or women.

Then I see her.

“Yes, her. The redhead.” Colbe swings back around, saying over his shoulder, “Don't be fooled. She looks like a fucking angel, but I'm telling you, she's is the biggest bitch I've ever met.” He grabs my shot and knocks it back. “She won't speak to me or anyone in the office. I don't know what her problem is.”

The woman in question stomps toward us, gaze locked on something behind us. Behind her, a red-faced man is cupping his eye and spurting obscenities. A woman, draped on his shoulder, is trying to sooth him by stroking his arm, but he shoves her away.

I'm beginning to get the picture.

“You fucking bitch!” the dude with the blooming shiner yells, “You don't know what you've done. You'll be sorry if you don't show up on Saturday!”

I doubt this clubhouse has ever seen so much excitement.

Appearing unshaken, The Bitch steps up to the bar and waves at the bartender. I turn back around, cup my empty beer, and pretend not to watch her.

“Two shots of tequila, please,” she says in a smooth, cultured, thoroughly calm and cool voice.

Maybe I shouldn't be. What kind of woman comes into a country club, punches some dude in the face and then makes herself at home? None that I've ever known. Or cared to know.

While her looks would make any man take a second look, I'm more taken by her balls. She's got bigger ones than some of the men I know.

And much better tits.

“Sure thing, Miss,” the bartender says as he gets her drinks. After pouring, he adds, “But you know I'm going to have to ask you to leave after this.”

“Yeah, I know.” She dumps one shot down her throat then snatches up the second. She raises it to the bartender. “To cheating assholes. May they all get what they deserve...Herpes!” After she empties the second shot she plunks the glass down. “You can put those on the asshole's tab.” Then she whirls around and, head held high, marches past the gaping, agog club members in the bar toward the exit.

“Poor bastard,” Colbe says, indicating The Bitch's victim. “Don't know how he got himself tangled up with that hellcat, but at least he's free of her now.” He knocks me in the shoulder. “See what  you're missing? I'm telling you, women are all bitches. Sure, they're sweet at first. But it's all an act.” He jerks his head toward the exit. “I'll give her that much, she doesn't even try to pretend to be nice to get what she wants. She's a bitch to everyone. All the time.” He points at my empty shot glass. “Want another?”

“No. I'm done.” Standing, I shove my hand in my pocket, pull out my money clip, and drop a couple of hundreds on the bar to cover the tab and tip. “I think I'm going to call it a night.”

“But it's still early. Don't you want to grab some dinner?”

“No. I'm not hungry. See you tomorrow.” Leaving my buddy behind, I weave through the bar to the exit. Outside I blink against the brilliant light glaring from the west. Sunset's an hour or so off. But the sun is big and heavy, sliding toward the western horizon.

My Jag is parked toward the back of the lot, where assholes won't dent it with their doors. I weave between the Mercedes and BMWs and Subarus.

Something catches my eye as I cross the third row.

No members of this club drives a
Ford
. Especially a shitty, rusty, beat up Ford.

I take a little detour to check it out.

Am I doing this because I'm wondering if it's her car? Maybe.

There's someone in the car. You can't miss the red hair. It's her. The Bitch, as Colbe likes to call her. She has her head down, her face cupped in her hands.

So does my dick.

They both tell me I should check on her, make sure everything is okay.

My head tells me chances are everything is good.

My dick just wants to get closer to that lush little body.

I knock on the window.

She startles, jerks her head up, and blinks big, wet eyes at me.

Oh fuck, she's crying. I don't know what to do with a crying woman.

I start to leave but she rolls down her window. “What is it?” she asks, voice a little shaky now.

“I saw you sitting out here and wanted to make sure you're okay.”

“Of course I'm okay. Why wouldn't I be okay?” She waves her hand. “Do you think just because I punched someone I'm falling apart? That just because my fucking fiance is in there with some ho, who he's been fucking for the past six months I'm not okay? That just because I'm sitting out here...outside of this fucking country club...and my life is ruined...and I left everyone and everything to marry that jerk...and I believed he was different than the others...I'm not...” She sniffles. Her lip quivers. She blinks. Once, twice, three times. Then she smacks her hands over her face. “Dammit,” she says. Her shoulders shudder as she fights to stop the tears.

I melt inside. I go back and forth between wanting to pound that asshole's face  into mincemeat and needing to take this sweet, little, broken-hearted woman in my arms and hold her.

Or hold a gorgeous woman?

I reach inside the open window, unlock her door and pull it open. “Come here,” I say as I gently tug on her arm.

She slides out of the car and tucks her soft, warm body against mine. Hot tears wet my shirt.

“It's okay,” I tell her, smoothing my hand down her back.

My dick, asshole that it is, decides it likes how she feels snuggled up against me. It gets hard.

She must feel it because she stops crying and looks down at my crotch. “Ohmygod!” She lifts her fist, rears back, and swings. I block the blow with my forearm. “You're all the same! Assholes!” She shoves me back, flops into her car, and slams the door.

And I am left standing there with a raging hard on. And a smile.

Now, how do I make her mine?

The Black Duke's Prize by Suzanne Enoch
Bloody Kin by Margaret Maron
Something the Cat Dragged In by Charlotte MacLeod
Tamed by Rebecca Zanetti
Tank by Ronin Winters, Mating Season Collection
Catacomb by Madeleine Roux
La ramera errante by Iny Lorentz
Perilous by E. H. Reinhard
Bound to You by Shawntelle Madison
To Beguile a Beast by Elizabeth Hoyt