Read Taken by Her Mate Online

Taken by Her Mate 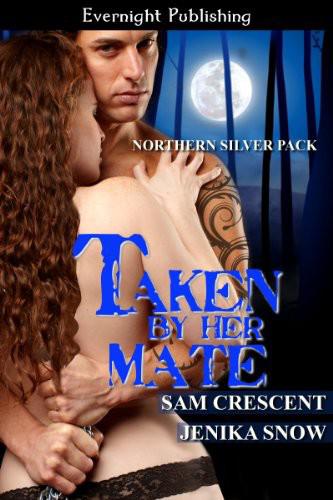 WARNING: The unauthorized reproduction or distribution of this copyrighted work is illegal.

No part of this book may be used or reproduced electronically or in print without written permission, except in the case of brief quotations embodied in reviews.

This is to
Jenika
Snow for taking a chance and working with me. She's an amazing author and working with
her
has been
a dream come
true. I hope this is the first book of many. Also, to
Evernight
Publishing, without them this story wouldn't have a home. Thank you so much to your continued support.

First I'd like to thank
Evernight
Publishing for everything they have done to make the writing process flawless throughout the way. I'd like to send a big thank you to the incredibly talented Sam Crescent, my witting buddy, for brainstorming with me on this story. It's been a great journey, and one I hope to take with you again!

TAKEN BY HER MATE

Shaun bounced in the back of the truck. His father was driving way too slow, and it had been two whole weeks since he’d last seen Addie.

“Come on, Dad, hurry up.” His father was at the Northern Mountains for pack business while Shaun was here to be with his friend and the girl he’d fallen in love with. She was only fifteen and would soon be sixteen, but he loved her. Shaun was three years older than she. There was no other girl or woman for him, and Shaun would wait for her until she was twenty-one.

Their wolf packs had laws that the females were not mated until they were twenty-one. Addie would remain a virgin until then. He hadn’t slept with another woman. Shaun was saving himself for his mate.

“We’ll be there soon, Shaun. Stop jumping in the truck. You’re my son, not a fucking child,” Edward said.

He paused and smiled at his dad. “Sorry, I promised Addie I’d see her soon.”

Edward let out a sigh. “Maybe you shouldn’t devote your life to Addie. I think it’s time you find new friends.”

“Not happening, Dad. Addie is … important to me.” Shaun wasn’t ready to admit the truth to his parent even though his dad probably knew it. Addie was the one. He felt it deep inside his core, and his wolf agreed with him.

They pulled up outside of Addie’s house. Her father, Steven Caldwell, was waiting. Steven smiled at him.

“Hi, Mr. Caldwell.
Where’s Addie?” Shaun asked, jumping out of the truck. The smile on the older man’s face slipped.

“Shaun and Addie, sitting in the tree,
K.I.S.S.I.N.G
—” Before Jackson got the chance to finish his taunt Shaun charged at him. He had the other male pinned underneath him.

“You promised.” He growled the words so only Jackson would hear.

“And I’m not saying a word. This is fun, little alpha.”

Shaun let the other guy go. He turned back to Steven.

“She’s with Brendan down by the lake.”

Shaun nodded, said his goodbyes, and made his way toward the edge of the lake. Shaun hated Brendan. The other wolf had an evil streak that terrified him. The way he attacked Addie, Shaun saw the intention in Brendan’s face to hurt her. The other members in Addie’s pack only saw the attacks as teasing. He’d seen Brendan covering up his abuse as a disguise as being pranks on a friend. Shaun didn’t see the pranks or the teasing. He saw a bully. No matter how many times he tried to appeal to Addie’s father and even Brendan’s, they pushed his concerns aside. Brendan could be a real suck-up when he needed to be. Also, he did most of the worst attacks when no one else was around. Whenever he was around, Shaun had taken to looking after her.

If Brendan ever hurt his Addie, Shaun would fucking kill him
dead.
At the sound of a female cry, Shaun paused.

“Your white knight’s not here to stop me. I can do whatever I want.” Brendan’s taunt echoed on the air.

Anger unlike anything he’d ever felt shot up Shaun’s spine. Closing his eyes, he sniffed the air. The instant he honed his senses on Addie’s scent, he charged in that direction. Without hesitation, he shot in the direction.

“Stop being a dick,” Addie said.

“Dick? I can show you what a dick is. Shaun will never know.”

“Leave me alone, you bully.”

Shaun saw them through the thick set of trees. Brendan was on top of Addie trying to tear her clothes from her body. There were bruises on her arm, and Brendan was tugging on her hair.

Roaring, Shaun jumped, kicking Brendan off Addie. The other guy went flying. Shaun didn’t give himself time to assess the damage to Addie. He pinned Brendan to the ground refusing to give up.

Brendan tried to pull out of his hold. “Get off me,” Brendan said, his voice rising when Shaun didn’t budge.

“It’s not nice to be pinned down, is it?” Shaun tightened his grip around Brendan’s throat. The desire to snap his neck consumed Shaun. Brendan was getting older, nastier, and uglier to deal with. Shaun knew there would come a time when he wouldn’t be here to protect Addie.

“Fuck you, Shaun. Nothing was happening.”

“When a girl tells you to get off, you get off, you fucking prick.” He leaned in close to Brendan. “She’s not yours. Addie is mine, and I’m warning you, Brendan, stay the fuck away from her!”

“Oh, yeah, what the fuck are you going to do?” Brendan asked, spitting the words into his face.

Shaun smiled. “I’ll always be here for Addie. You hurt her or leave a mark on her body, and I swear to God, I’ll make you pay. I don’t care about pack laws, Brendan. I’ll fucking end you. I don’t give a fuck if you’re the alpha’s son. I want to feel your blood.”

Brendan chuckled. “I get it. You want her for yourself.”

He let the other wolf go. Shaun stood. “Get out of here.”

“You’re going to be in for a few surprises, Shaun. You’re not going to be around forever, and I’ll get to do whatever the hell I want.” In the next instant Brendan disappeared in the distance.

Shaun turned back to Addie. Tears streaked down her face. Her hair was all over the place from being pulled. Bruises covered her arms, and her shirt was torn. She was still the most beautiful girl he’d ever seen.

“Shaun.” She said his name with a sigh of relief to her voice.

He opened his arms, and she charged into them. “Thank you so much. I don’t know what’s wrong with him. He’s different. I’ve never known him to be like this. He scares me, Shaun.”

“Shush, I’m here. I’ll never let anything happen to you. I promise.” He stroked her hair, closing his eyes and simply enjoying the feel of her against him.

“It’s so good to see you,” Addie said, smiling up at him.

Stroking her cheek, Shaun looked behind her. “I think it’s time for a swim.”

Addie removed her clothes down to her bikini. Shaun jumped in the water in his swim trunks.

They ignored the fear of Brendan. He took the time to enjoy Addie’s company. She laughed, joked, and played with him. His time with her was Shaun’s time to be free of his teachings. His father wanted him to be the best alpha for the pack, which took time.

After a few hours passed they sat together on the bank, drying off in the rays of the sun.

“Is Brendan getting worse? How often does he hurt you?” Shaun asked angrily.

Addie sighed.
“Whenever I’m alone he finds some way to hurt me.
He always seems happy to see me in pain. Something is going on with him. I don’t know what. He frightens me.”

“What about Jackson? Does he know?”

She shook her head. “Brendan always waits until I’m alone.”

Shaun took her hand in his. He pressed a kiss to her knuckles. “I scent Brendan’s evil. He’s different, and I don’t trust him. Trust your instincts, Addie. Never be alone, and stick with Jackson. I can’t be here all the time. I try to be, but it’s not possible. Please, do what I ask, and I’ll talk with your brother.”

“I don’t want to cause trouble.”

He caught her chin in his hand. “You’re not causing trouble. He shouldn’t be hurting you. No matter who he is, he shouldn’t be doing it. In my dad’s pack he’d be punished.”

She tucked her hair behind her ear and leaned in close. “What would I do without you, Shaun?”

Shaun refused to answer. The other man scared him. He wasn’t personally afraid of the guy. He could snap Brendan like a twig. What scared him was leaving Addie alone. Brendan wanted Addie, and there was something in his eyes that left Shaun uneasy.

No matter what, he’d do everything he could to guarantee her protection.

Addie watched as Shaun left. Brendan had scared her so bad, and this wasn’t the first time. Whatever was changing with Brendan was powerful and frightening. She had always felt something profound for Shaun, knew that they were not just friends. Shaun may never feel the same thing she felt, but he cared for her, deeply. She could tell.

“I sure hope you know what you’re doing, kid.” Jackson flopped beside her and nudged her with his shoulder. She wrapped her hands around her arms to hide the bruises. The last thing she needed was Jackson going over and finishing what Shaun started.

“What are you talking about?” Her focus was still on Shaun’s father’s truck as it drove away.

“Addie girl, you know what I’m talking about. You have stars in your eyes.” She looked at her brother and felt her cheeks heat. Were her emotions that transparent? He chucked her under the chin and smiled again. “Just be careful.” He turned and left. Maybe he was right. Maybe she should be careful, but look at how that turned out for her. She was living a life that didn’t feel right, and that was spiraling out of control. Maybe things would change, but if they didn’t was she strong enough to make the change herself?

The Pale Blue Eye: A Novel by Louis Bayard
Hypnotized by the Billionaire by Gemissant, Winter
Ramage's Diamond by Dudley Pope
Shades of Murder by Ann Granger
The Guardian Alpha by Evelyn Glass
Shiloh by Phyllis Reynolds Naylor
Sovereign by Celia Aaron
Desired and Dominated by Eva Simone
Death hits the fan by Girdner, Jaqueline
Injustice by Lee Goodman