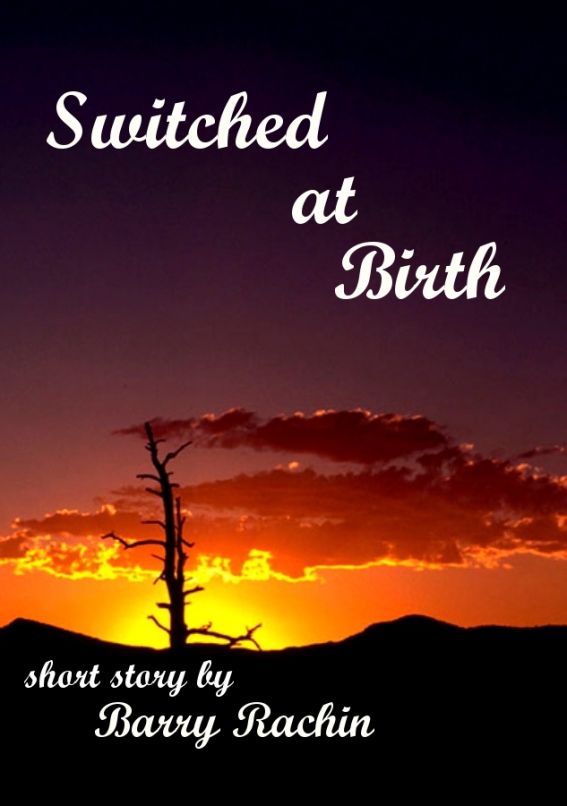 This ebook is licensed for your
personal enjoyment only. This ebook may not be re-sold or given
away to other people. If you would like to share this book with
another person, please purchase an additional copy for each person.
If you’re reading this book and did not purchase it, or it was not
purchased for your use only, then please return to Smashwords.com
and purchase your own copy. Thank you for respecting the hard work
of this author.

This short story represents a work of
fiction. Names, characters, places and incidents are the product of
the author’s imagination or are used fictitiously. Any resemblance
to actual persons, living or dead, events or locales is entirely
coincidental.

“
Adrian Flanagan’s working
three to eleven over at the Brentwood Nursing Home.” Like a poker
player dealt a lousy hand and waits for his opponent to fold or
raise the ante, Jason Mangarelli fidgeted with his hands. “Thought
I might drop by later this week and see how she’s
doing.”

His mother, who was stuffing the
washing machine with a load of soiled towels grimaced but never
bothered to raise her head. The wiry youth, who stood a tad under
six feet, flicked a shock of dark hair out of his hazel eyes and
watched her measure out a cupful of Borax liquid detergent. Mrs.
Mangarelli, a petite Italian woman with auburn hair and a pointy
nose, sprinkled softener into the machine before closing the lid.
“Not a good idea.”

“
The nursing home is a
private business and you’ve no legitimate reason being
there.”

Jason cringed. His mother was doing
‘the voice’. The voice was a stilted, phony as a three-dollar bill
inflection that she inadvertently slipped into when feeling
uncomfortable, out of her natural element. A set of gears in the
washer clicked and the agitator began swirling the dirty clothes in
the sudsy water. Only now did his mother step back, hands on hips,
and look her son full in the face. “Some things are better left in
the past.”

Some things
… A year older than Jason, Adrian would have been
twenty-three, though no one had laid eyes on the girl in over a
decade. Around Jason’s sophomore year in high school, raunchy
rumors began percolating. Then, mercifully, the ugliness died away.
The teenage girl blipped off the radar screen, vanished presumably
into some sordid black hole, only to resurface five years later.
Well, not exactly. Adrian never physically resurfaced—only the
swirl of smutty gossip. “I wonder if Jack Flanagan knows his oldest
daughter’s back in town.”

Jason’s mother shrugged. He could see
her pulling up the drawbridge, walling herself up behind a thick
slab of brittle-minded certitudes. “It’s been at least a dozen
years now,” the boy pressed his point. “The jerk doesn’t care if
Adrian’s alive or dead?”

“
She disgraced her
family.”

Jason snorted sarcastically. “And in
the next breath I suppose you’re gonna tell me Adrian’s old man’s a
freakin’ saint?” His mother’s eyes flared, her lower jaw flattening
like a battering ram but the middle-aged woman held her
tongue.

Arian lived three houses down on the
cul-de-sac. Jason remembered her as a round-faced imp with coal
black hair cropped short —a persnickety tomboy with sparkling eyes,
a burnished coppery complexion and stocky frame. When they were in
fourth grade Adrian took Jason aside. “My dad told my mother she’s
got shit for brains.” Jason didn’t know what to say. “She called
him a two-timing louse.”

Jack Flanagan, a pot-bellied Irishman,
was a loud-mouth braggart who made it big in the durable medical
supply business. Adrian’s mother was a hypochondriac and
compulsive, non-stop talker. In later years, Jason developed the
rather bizarre theory that his best friend had been switched at
birth. Adrian’s parents—that is, the bogus couple who brought her
home from the maternity ward—couldn’t possibly be biologically
related to this soft-spoken, angelic soul. “My parents hate each
other so they’re getting divorced.” Adrian reached out and grabbed
his hand. They were sitting on a plump sofa watching a Simpsons
rerun. Because of endless pranks at school, Principal Skinner had
Bart sent off to France where he was working in the wine fields as
an indentured servant. “You’re my best friend,” Adrian continued in
a faltering voice.

Again, Jason didn’t know what to say.
He was nine years old and still struggling with long division. A
few months later, Adrian was gone from their lives, dragged off to
live with the garrulous mother’s extended family. Jack Flanagan
remarried the following year and his new wife, who was really just
a repackaged, jazzed up version of his old wife, got down to
business.

“
Went to a musical in
Boston.” A couple years older than her brother, Jenna was a
prettier version of the mother with an equally blunt temperament
but less pointy nose. “She was in the Theater District just off
Tremont Street near Park Square working the crowd.”

“
Adrian was gussied up like
a hooker. A car pulled up and the driver rolled down the passenger
side window. They negotiated a price. Adrian jumped in and they
drove off.”

Jason felt nauseous, light headed. “Did
you say anything to mom?” His sister shook her head.

Jenna nodded once. His favorite
playmate from elementary school still wore her dark hair in a
close-cropped, pixie style. The same squat, compact torso. “She’s
all grown up now,” Jenna said with a sober expression. “Got hips
and breasts.”

Adrian Flanagan as
streetwalker decked out in a flimsy halter top, neon hot pants and
stiletto heels.
Like the missing piece to a
salacious, X-rated puzzle, this latest bit of titillating garbage
fit neatly with the other outlandish fragments of hearsay, idle
gossip and innuendo that filtered back to Jason over the years. A
friend of a friend who knew Adrian’s mother once removed heard that
the young woman—she wasn’t a teenager any more—was a speed freak.
Adrian Flanagan ricocheted in and out of prison, was living on the
streets selling her body for crack cocaine. Another remake of the
saga had her cloistered away in a halfway house for recovering
addicts. She’d found Jesus, Krishna, Buddha or consecrated her
mortal soul to some occult, Christian fundamentalist group. Still
later, Adrian was dead, buried in a potter’s grave. Who the hell
knew?

On Tuesday evening, Jason drove to the
Brentwood Nursing Home and sat in the car with the engine idling
for a good twenty minutes before mustering the nerve to enter the
building. “Adrian Flanagan?”

“
Over in the west wing.” The
receptionist waved a hand in the direction of a passageway. “Check
with the nurse’s station at the far end of the hall.”

The Brentwood Nursing Home had a
distinct odor—an odd mix of body wastes, Phisohex, cleaning fluids,
and herbal ointments. Several bedridden women in adjoining rooms
were moaning in a repetitive, sing-song fashion. As Jason passed
the elevator, an emaciated gentleman dressed in a white johnny
tried to rise from his wheelchair setting off a shrill beep. A
nurses aide came running and eased the fellow back down. As soon as
his withered rump made contact with the padded leather seat, the
hidden monitor fell silent.

At the nurse’s station a colored woman
was writing in a patient’s chart while a male orderly sorted pills
in paper cups arranged neatly on a medicine tray. A stocky,
attractive woman with short dark hair and pink smock exited a room
carrying a carton of juice. The woman hurried past toward the
nursing station. There was no recognition. Nothing.
“Adrian?”

The woman abruptly turned and came
back. Staring at him for the longest time, her features dissolved
in a wispy smile. “Jason Mangarelli all grown up!” She leaned
forward and, as though it was the most ordinary thing in the world,
brushed her lips across his cheek.

At the nurse’s station a telephone
rang. The fellow with the pill tray was locking the medicine
cabinet with a brass key. For a split second, it was like they were
back on the sofa at his parent’s house. On the television screen,
Bart Simpson was telling the French gendarme that he had been
abducted by evil wine merchants, who were watering down the spirits
with automotive antifreeze. “I’m off duty in ten minutes. Wait for
me outside in the parking lot.” Like an apparition, Adrian floated
off down the corridor disappearing into an adjacent room. Jason
went outside and sat in his car. He felt mildly disoriented, as
though time had begun flowing in the wrong direction, bleeding back
into the past and forward into an as yet, unfathomable future -
Einstein’s theory of relativity turned upside down. A dozen years
flushed down the toilet. Nothing had changed.

The girl Jason knew back in Thatcher
Elementary School was a husky tomboy through and through. Back
then, Adrian Flanagan’s lower torso was fused with the upper half,
as though a ramrod was solidly fixed from tail bone to the nape of
the neck. Now her hips rocked with a supple, feminine grace. Adrian
had blossomed into a woman.

A little after eleven o’clock, a steady
stream of employees began dribbling out of the building. “Want to
grab a coffee?” Jason asked.

Adrian shook her head. “Got to get home
to my baby, but I only live a few miles down the road. You can
follow in your car.

Jason went back to where he parked.
Adrian was a mother. Yes, a rumor to that effect circulated for
years. At fifteen, Adrian delivered a baby out of wedlock but
signed away maternal rights at birth. A month later she was
pregnant with a second child. Sadly, like everything else, the
ephemeral truth lay buried beneath a bruising avalanche of tall
tales, hearsay, melodrama and patently bad fiction.

Adrian lived on the second floor of a
modest apartment complex in the Maryville section of town. When
they opened the door, a small dog barking hysterically rushed to
greet them. “My baby,” Adrian said by way of
explanation.

“
And I thought …” He left
the sentence hanging.

In the kitchen Adrian removed a plastic
container from the refrigerator. Scooping a serving into a bowl,
she warmed it in the microwave and placed the food on the
floor.

Adrian held the container under Jason’s
nose. “Bowtie macaroni, sweet potato, peas, carrots, corn, sliced
apples, chicken livers and ground turkey.” The dog, a dirty gray
shiatsu, devoured a chunk of turkey then went to work on the
macaroni. Wolfing down the entire bowl in less than thirty seconds,
it licked its chops, then began rushing about the kitchen in a
frenzy with its corkscrew tail arched over the hind
quarters.

“
You cook your own dog food
from scratch?”

Adrian nodded. “The glutton wants more
but that’s all she gets.”

Adrian’s dog, Mitzi, previously
belonged to an elderly woman brought to the nursing home from the
West End Trailer Park. Multi-infarct dementia - the lady had
suffered a series of mild strokes each of which further sapped her
sanity and physical strength. The addled resident had been living
at the Brentwood Nursing Home the better part of a week before she
let slip that her dog was locked up, abandoned in the trailer.
Adrian located a house key in her bedside table and made a frantic
trip to the trailer. Half starved and badly dehydrated, the dog
could just barely stand up. The floor was rotting out and the roof
leaked. The smelly trailer was littered with dog filth, fleas and
newspapers dating back to the Kennedy assassination.

One Bright Morning by Duncan, Alice
With a Twist by Heather Peters
Morgue by Dr. Vincent DiMaio
Skintight by Susan Andersen
Blame It on the Fruitcake by Pat Henshaw
Haroun and the Sea of Stories by Salman Rushdie
The Edge of Sleep by Wiltse, David
Searching for Bobby Fischer by Fred Waitzkin
Spellbreaker by Blake Charlton
No Virgin Island by C. Michele Dorsey