Read Sweet Child of Mine Online

Sweet Child of Mine 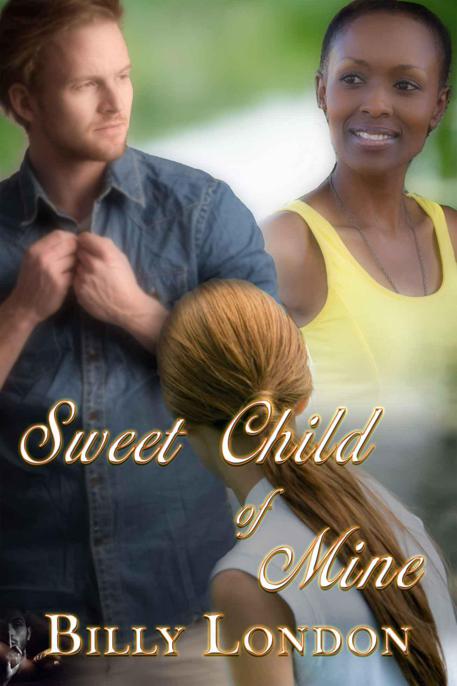 Sweet Child of Mine

This is a work of fiction. Names, characters, places, and incidents are products of the author’s imagination or are used fictitiously and are no to be construed as real. Any resemblance to actual events, locales, organizations, or persons, living or dead, is entirely coincidental.

Abigail slammed her fist against the door in rapid succession. First and last time. She’d never been one to accept nonsense and her current predicament was no different. Glancing down at the twelve-year-old demon who stood sulkily beside her, Abigail pounded on the door again.

“I told you, I don’t remember.” The girl’s green eyes only reflected pure resentment.
You’re a baby
, Abigail dismissed with a raised eyebrow.
You couldn’t possibly scare me in your wildest dreams
.
Unless it was proved I somehow am your mother. Then I’d be shit scared.

“And what happened to your keys?” Abigail asked.

She shrugged. “Forgot my keys.”

Abigail harrumphed. “I’m sure keys were the last thing on your mind.”

Liam McNamara better start acting like a fully committed parent if this wasn’t to be a regular occurrence in his life—people turning up on his doorstep to complain about his child, that is. She couldn’t believe it when she’d grabbed the girl’s T-shirt collar before she and her accomplices disappeared. Shaking some sense into the silly girl was her first thought. The second was to beat the madness out of her. Her overwhelming thought and final decision was to return Leila to her father with all the shame she deserved.

Where the hell was the damned man? His delinquent child was a world away from the hushed tales of his bravery and tragic beauty in the face of his loss as a widower. Church folks didn’t half talk rubbish. His daughter was a menace.

Liam’s gaze travelled between Abigail’s raised eyebrow and Leila’s scuffing toe. A blush invaded his skin as the realisation of why they were standing there and why Leila looked so damn guilty took over.

“The hell, Leila?” He sighed heavily. “I’m sorry,” he offered automatically, his gaze turning back to Abigail. “Abigail, isn’t it?”

He knew her name. That didn’t bode well. What had her mother been up to? “Yeah, it is.”

The corners of his mouth lifted briefly. “Your mum has your graduation pictures in her purse. She hands them out, you know?”

Jesus save her. Her mother was desperate enough to have Abigail wedded and with child to be handing out photographs over thirteen years old. At least her mother was showing she had standards. “That’s great. Don’t you want to know what your daughter has done?” she asked, lifting her eyebrows.

Liam rubbed a hand over his forehead. “Come inside. My neighbours don’t need any more entertainment from this house.”

He stood to one side and Leila flounced past and went straight upstairs to her room, Abigail guessed. They both winced as a door slammed. Liam watched the space where his daughter had stood, his face twitching as he controlled his temper. Abigail stood awkwardly by the door, arms folded around herself.

“Can I offer you a drink?” he said eventually, clearly remembering she was still standing there.

She wondered if that was what he’d been doing—drinking? Dulling away the pain of the dissolution of his life? On closer inspection, when the all-encompassing brightness of his beauty could be blinked away, Mr. Perfect looked like hell. Dark shadows beneath his forest-green eyes were emphasised by the russet beard that was growing out of control. He had far too long a hair for anyone to take him seriously. Grief, he was a member of the Kings of Leon before they discovered the joy of a pair of scissors.

“No. Thank you. I’ve got a café to clean up. Make it into something that isn’t covered in eggs.”

He held up his hands in apology. “I’ll pay for the damage.”

What? Is that it? Throw money at the problem and hope his daughter sees the error of her ways alone? “Are you going to tell her what she did was wrong, or are you just going to offer me money and hope I won’t say anything else?”

His mouth tightened briefly. “I’m sure you know already. But Leila’s been struggling since her mother died. The therapist told me she’s just acting out for attention.”

“This isn’t acting out,” Abigail said irritably, her temper rising. “This is vandalism. She’s at a very good school and if she doesn’t stop behaving as if the world owes her, she’ll be out on her ear.”

Liam stared at her for a minute, until she started to squirm uncomfortably. “Do you have children?”

The question haunting her life at the moment. “No, I don’t. I just know the line between decent behaviour and criminal activity. Your daughter crossed it.”

“She’s a child,” he reminded her. “She’s going through a lot without you throwing in your unsolicited advice. I’m sorry for your café. I’ll drop in a cheque in a few days. If you don’t mind… You can see your way out.” Without another word, he turned and followed his daughter up the stairs and out of sight.

“What did he say?” Orna asked. “Did he apologise for her?”

“What do you mean sort of?” Orna bristled. “His daughter egged your café! Sorry is the least he could do.”

“Look. I drove her home, she said sorry, he sort of apologised. It’s not my problem.”

Orna disagreed. “You’re getting old, Abigail. You can’t hold out for a man who hasn’t already done what you should have. He’s alone and he obviously needs help with his child. What else are you doing?”

Sympathy for Liam trickled through her. She should reserve it for herself, but at least she was fully aware of her mother’s scheming. She doubted Liam knew how well his own mother advertised the “poor single dad” routine at their church. It was the only reason Abigail had been able to return Leila safely home.

“As Liam kindly reminded me, I don’t have children of my own. I don’t know anything about them.”

“You’re wonderful with children! You’re so good at Sunday school. It baffles me why you stopped attending.”

Church exhausted her. Being a free babysitter on top of that was not her way of enjoying her weekend, especially now the café was open seven days a week and served a very lucrative Sunday brunch.

“It’s not my place, Mum. He’s her father, I’m sure he’ll discipline her as he sees fit.”

“Guaranteed the next time Leila McNamara decides to play little vandal, she won’t be escorted home, she’ll be waiting at a police station,” Orna predicted, sitting back in her seat and securing her belt.

“School term starts in a few weeks,” she replied, moving the car in the direction of her mother’s home. “She’ll have too much homework to be a vandal.”

“Vandalizing is a part-time job,” her mother snorted. “I’m sure she’ll manage. Sheila and I will just have to have another chat about them both.”

Abigail caught her mother’s eye in the rear-view mirror. “Don’t involve me.”

Her response was a shrug. “Suit yourself.”

Liam knocked on Leila’s door only for the screech to penetrate every register of his hearing. “Go away!”

He opened it and strolled in. No locks in his house. Not anymore. His daughter lay facedown on her bed, pillows on top of her head. Jesus, her room was a state. One Direction posters marred her pastel pink walls and tears were appearing on the paper, where she had picked away at it in boredom. She’d thrown piles of clean clothes over her desk, clothes he’d laundered with the patience of God’s most high, and the light bulb in her floor lamp was broken. Another tantrum? For the day when they would end...

“Are you going to tell me what happened?”

He shoved his hands into his pockets. It had taken him a long time to learn not to show people what he was thinking or feeling, but damn if his child wasn’t testing him. “You can’t do things like that.”

“I didn’t do anything!” Leila blazed. “I just walked past and she caught me and told me I had.”

Liam lifted his eyebrows. She’d lied better than this before. “Why were you all the way in town? I thought you were with Rebecca?”

Leila halted, clearly thinking about how she needed to phrase what she said. “I went for a walk. Everyone else was having a nap.”

“Rebecca’s house is a twenty-minute drive from
The Library
,” Liam reminded her, naming Abigail’s two-floor café. “How would you walk that far?”

“What?” she yelled. “You don’t believe anything I say, so why bother?”

It’d be so easy to agree with her, but what would that do but cause them both pain. “Tomorrow, we’ll go to the café and you can apologise properly,” he advised her, closing the door behind him. He heard the screech of frustration and the clatter of more belongings thrown around the room.

Up until a few months ago, he’d have grounded her until she passed her A-levels. Now he couldn’t bear the conflict. It made every part of his soul hurt. Sarah’s parents’ suggestion that Leila stay with them for a few weeks was looking more and more agreeable. Even if they’d fill Leila’s head with crap about Sarah’s endless virtues.

Pulling together the ingredients for a Spaghetti Bolognese, he turned on the radio for atmosphere. Just to have the sound of someone who didn’t resent him and everything he did ringing in his ears. The scent of food enticed his progeny down the stairs. Morosely, she opened the fridge and shut it again.

“Ten minutes,” he promised, dropping the dry pasta into a pot of boiling water. She twisted her lips and leaned against the fridge.

“Faster,” he shrugged, glancing up at her. “It’s this or cream crackers. Take your pick.”

“I’ve put some in the oven. It’ll be ready in time with the pasta. While you’re standing there, can you grate some cheese?”

She pouted. “I don’t want cheese.”

His eye twitched. “I do. Make yourself useful.”

She gave a snort of disgust. “No wonder Mum left.”

“Leaving both of us behind. You’re not grating the cheese.” He looked away from the bubbling sauce to see his daughter, fists clenched, face flame red. “You’re upset?” he guessed. “New playlist, baby. I’m bored of this.”

She wanted conflict? Fine. It was obviously unavoidable. “You and the rest of the world. So let’s try and change things. Remember that boarding school your mother so kindly found and pushed for you to go? Fancy giving it a term?”

Leila sucked in a breath. “I’m not going to a fucking boarding school!”

He smiled grimly. “That one word just brought you a step closer. You’re on trial, little girl. Because this...” he pointed at her with a tomato-red wooden spoon, “stops now.”

“You wouldn’t,” she challenged. “Granny won’t let you.”

“Funny that and yet, I still have a cheque made out to the school, ready to be sent by courier. I know the flight schedule for every plane from Heathrow to Norway. I’ve got your passport. Plus I’d be the one booking your flight, so Granny’s not going to have a say in it.”

Chain of Kisses by Angela Knight
Kate Takes Care Of Business by Cartwright, Rachel
How to Bake the Perfect Pecan Pie by Gina Henning
Catch a Mate by Gena Showalter
The Blacksmith’s Bravery by Susan Page Davis
The Glass Coffin by Gail Bowen
The Mary Russell Companion by Laurie R. King
All Chained Up by Sophie Jordan
Hailey's War by Jodi Compton
Mad Lord Lucian by West, Shay