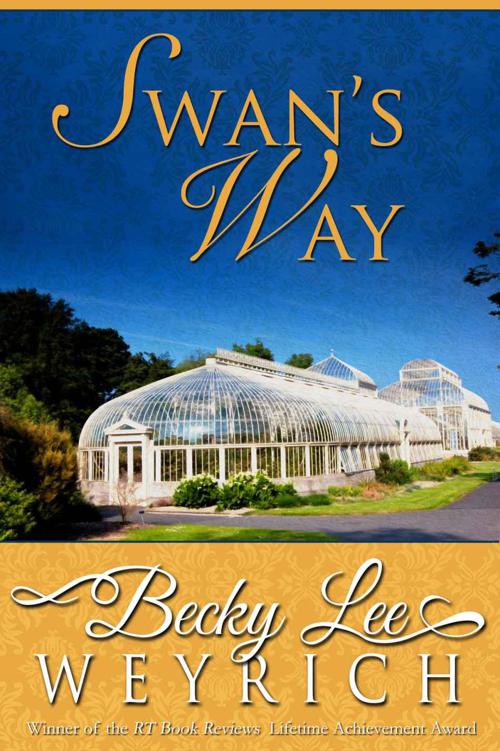 Copyright © 1997 by Becky Lee Weyrich
All rights reserved, including the right to reproduce this book or portions thereof in any form whatsoever.

This is a work of fiction. Names, characters, places and incidents either are the product of the author’s imagination or are used fictitiously. Any resemblance to actual persons, living or dead, events or locales is entirely coincidental.

“What a delight to have such a handsome couple before me, Miss Swan, Mr. McNeal. You must both hold perfectly still now and look directly into my lens.”

Slender, dark-haired, bearded Mathew Brady spoke to his subjects from behind the large, tripod-mounted box of his camera. He was a dapper gentleman in his black coat and doeskin trousers, topped off with a merino vest and silk scarf. Propped nearby was a handsome cane with a silver head fashioned like a tiny camera, a gift to the photographer from the Prince of Wales, who had had his own portrait done in this very room only five months ago, during his tour of America.

Of all Virginia Swan’s extraordinary adventures on her first trip to New York City, this visit to Brady’s uptown studio at 859 Broadway and Tenth Street to have her engagement portrait done ranked as the most unique. She didn’t know what she had expected, perhaps a drab shop that reeked of chemicals and cigar smoke. She had steeled herself for such a place—something between a sweat shop and a mortuary. Instead, she caught the faint aroma of expensive Atwood’s cologne, the same scent her fiancé sometimes wore. And imagine her surprise when she entered the reception room two floors below, through doors of beautifully etched glass, to find inside velvet tapestries, walls hung with silver and gold paper, banks of mirrors, crystal chandeliers that sparkled like stars in the mellow gaslight, and elegant rosewood furniture. The special “Ladies Parlor” was no less pleasing, with its green satin decor and fragile gilt-painted chairs. Examples of Mr. Brady’s work hung everywhere—portraits of statesmen, European royalty, freaks from Mr. P.T. Barnum’s museum, along with likenesses of everyday people like herself.

Now she stood one floor above “Brady’s Famous National Portrait Gallery” in the studio, her head firmly held in place by a metal support, waiting for the moment of truth, when Mathew Brady would uncover his lens and magically imprint the image of herself and her fiancé on his collodion-coated glass plate, stopping time for an instant and capturing forever the love that shone in her eyes for the man who would soon make her his wife.

Having her portrait done photographically was a new experience for Virginia. But then she was finding these days that life after betrothal was full of new experiences, each one more exciting than the last. She was engaged, but more than that—
in love
. And love, she found, made all the difference in the world.

She rested her hand lightly on Channing McNeal’s shoulder and smiled down at him. He looked especially handsome this morning, dressed in the high-collared, brass-buttoned, gray cadet uniform of West Point Military Academy.

It swelled her heart with pride to think that in another four months, he would graduate with the Class of 1861 and receive his commission in the United States Army, along with her eldest brother, Rodney. The entire Swan family planned to travel with the McNeals from their plantations in Virginia to upstate New York to attend the commencement ceremonies and the grand reception afterward, on the superintendent’s lawn. There would be parties, too, teas, balls, and, of course, the traditional stroll along Flirtation Walk with her beau.

Following that auspicious occasion, the two new second lieutenants would return to Virginia for a visit at home and for the wedding—a double ceremony to take place at Swan’s Quarter at which Rodney Swan would wed his childhood sweetheart, Agnes Willingham, while Virginia exchanged vows with Channing McNeal. There would be no time for a honeymoon, but that didn’t matter to Virginia. Becoming “Mrs. Lieutenant Channing Russell McNeal” would provide more than enough happiness for her. Wherever her husband’s orders took him, his new bride would follow, willingly. They would honeymoon, as they traveled to his first post, their first home together.

Whither thou goest
, she thought, smiling down at her darkly handsome fiancé.

From behind the bulk of his camera, Mathew Brady peered out of his wire-rimmed, blue-tinted spectacles at the stiffly posed couple. “If you don’t mind, Mr. McNeal, this is to be an engagement portrait, not a wanted poster. Do try to relax, won’t you? You look as though you’re staring into a hangman’s noose.”

Brady wasn’t far off the mark, Channing thought. Actually he felt as if he were staring into the barrel of a loaded cannon, as he might well be, before long. The prospect of war did not frighten him. He was trained for battle. Something else far more unsettling was on his mind this bright March morning.

He had wanted everything about Virginia’s visit to West Point and his furlough to New York City to be perfect. Perhaps his fiancée had missed the tension at the Academy, but her father had noticed the dissension in the ranks, immediately upon his arrival, and Jedediah Swan had not been cheered by what he saw. Since South Carolina’s secession from the Union back in December, the cadets had become polarized, North and South. The atmosphere at the Point these days was explosive. Many cadets had already resigned to go South. The first had been Channing’s own roommate, Henry Farley, from South Carolina, who left in November of 1860, even before his home state seceded. There had been many fights among the cadets, even one duel. On Washington’s Birthday, one of Channing’s classmates, a flamboyant but unstudious fellow named George Armstrong Custer, had led the singing when the band in the quadrangle struck up the “Star-Spangled Banner.” Custer’s roommate, Thomas Lafayette Rosser, had countered with a boisterous rendition of “Dixie.” A near-riot had ensued. That was when Virginia’s father had ceased holding his silence to state his opinion to his future son-in-law clearly, and succinctly: “I am raising a cavalry unit for the coming conflict, Channing. I expect
all
my sons will want to ride with me, should the North be so foolhardy as to invade our homeland. We men of Virginia know our duty and must answer the South’s call.”

A war was coming; there was little doubt of that. The only question in Cadet Channing McNeal’s mind and heart was with which side—North or South—would he, a born and bred Virginian, cast his lot? He knew his own family’s sentiments. They were Virginians to the pits of their souls, the same as Jedediah Swan. But Channing himself had other feelings, other loyalties. How could he fight against his own country? He had walked the hallowed halls of the Academy at West Point for the past four years in the very footsteps of Ulysses S. Grant, Class of 1843; William Tecumseh Sherman, Class of 1840, and Robert E. Lee, Class of 1829, a Virginian himself, yet rumored about the Academy to be the most likely candidate to lead the Federal forces in the “Southern rebellion,” as his northern classmates termed it.

“Smile, dearest.” His fiancée’s soft voice interrupted his troubling thoughts. “If not for Mr. Brady, smile for our children and grandchildren. What will they think, if they see you scowling so in our engagement portrait?”

Mathew Brady gave a short bark of a laugh. “Ah, Mr. McNeal, she has you there! Think of the wonder of it. A century from now, your children’s children will gaze on my work and see you both, just as you are today, flesh and blood, smile and scowl. Do you really want to be remembered this way? With such a lovely fiancée, it looks rather unseemly, somehow.”

Channing glanced up at Virginia. His heart never failed to thunder with joy at the sight of her. Dark gold curls draped her shoulders and framed a face that was as perfect as the finest French porcelain. Lips as delicate and soft as the petals of the first summer rose and a pert nose that tilted up just enough to suit him. Her eyes, though, were her most bewitching feature. Dazzling now in the shower of sun from the windows, with tints of blue, silver, and gold. Looking at her, he couldn’t help smiling. She was his love, his soul, his whole world.

Virginia held her breath. She felt almost wicked, having this portrait made. Her grandmother had railed against such modern voodoo, claiming that to have one’s image captured, other than in a painting, was the same as having one’s very soul stolen by the charlatan behind the camera. But if there was any soul-stealing going on in Mr. Brady’s Broadway studio, Channing McNeal was the thief. She had been in love with him since before she knew the meaning of the word. He had been born and raised on a neighboring plantation. Often, it had seemed that he was the fifth son of the Swan clan, or she the third McNeal daughter. Soon it would be so, and the two families would be linked forevermore.

She had to force herself to keep from smiling wider when she thought ahead to the June day when she and Agnes would descend the elegant staircase of the main hall of Swan’s Quarter to be married in the front parlor, while their assembled families and friends looked on. Virginia planned to wear her mother’s wedding gown, the same handstitched satin and lace that Melora Etheridge had worn twenty-eight years ago, when she became Jedediah Swan’s wife. On that day, the happy couple had planted a tulip poplar sapling. Now a towering monument to their enduring love, it spread its branches to shade the swan pond on the plantation’s front lawn.

Channing and I should plant a tree
, Virginia thought.
A symbol of our love for each other and a vow never to be parted
.

“Done!”
Mathew Brady announced. “You are now immortalized, my young friends. I hope you will invite me to your wedding. I’m opening a studio in Washington soon, and I would dearly love to create your wedding portrait.”

“Oh, what a wonderful idea!” Virginia cried. “By all means, Mr. Brady. The date is set for the first of June. A new month for our new life together. Mother and Father will approve of our inviting Mr. Brady, don’t you think, Chan?”

Channing stood and took her hand. His dark eyes captured hers, and the intensity of his gaze all but took her breath away.

“How could anyone not approve of whatever you want, Virginia?”

She fought for control, before she could speak. When she did, her voice was a bare whisper. “Then it’s all settled, dearest. We’ll have another portrait on our wedding day.”

A slow, lazy smile warmed Channing’s dark features. “There can’t be any wedding until I give you a token of my affection. Come along now, my love. We’re going to buy you a ring.”

Virginia knew it was rather unseemly, but she couldn’t contain herself. Besides, no one but Mr. Brady was watching when she threw her arms around her fiancé’s neck and gave him a sound hug. He hugged her back, but, even as he did, she felt him sigh deeply. It was a worried sigh, and she knew, even though she had tried to keep it from him, that the possibility of the coming war was uppermost in both their minds.

Why now?
she wondered.
When our lives should be so perfect!