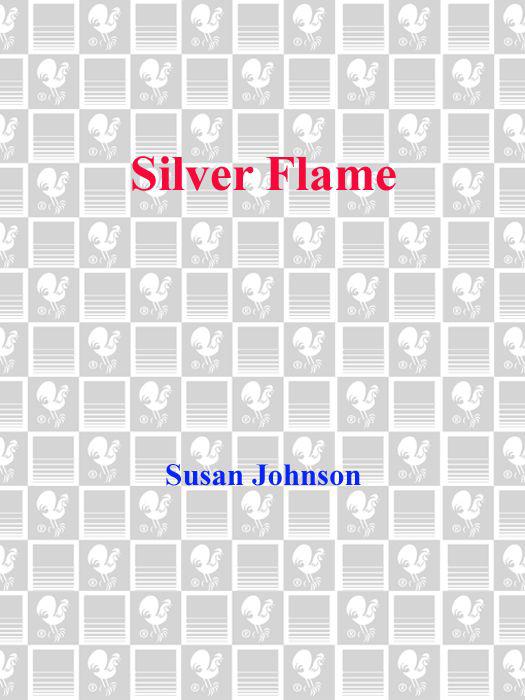 “What
will
you do with me, Trey?” she asked, more than a hint of impudence in her tone.

He smiled. “Whatever you prefer, Empress, darling.”

He towered over her, clothed and booted, as dark as Lucifer, and she was intensely aware of his power and size, as if his presence seemed to invade her. “But take your time,” he went on, recognizing his own excitement, running his warm palm up her neck and cupping the back of her head. Trey’s voice dropped half an octave. “We’ve three weeks.…”

Bending his head low, his lips touched hers lightly, brushing twice across them like silken warmth before he gently slid over her mouth with his tongue and sent a shocking trail of fire curling deep down inside her.

She drew back in unconscious response, but he’d felt the heated flame, too, and from the startled look in his eyes she knew the spark had touched them both.…

This edition contains the complete text
of the original paperback edition.
NOT ONE WORD HAS BEEN OMITTED.

A Bantam Book / published by arrangement with the author

All rights reserved.
Copyright © 1988 by Susan Johnson.
Library of Congress Catalog Card Number.
No part of this book may be reproduced or transmitted in any form or by any means, electronic or mechanical, including photocopying, recording, or by any information storage and retrieval system, without permission in writing from the publisher.
For information address: Bantam Books.

Published simultaneously in the United States and Canada

Bantam Books are published by Bantam Books, a division of Random House, Inc. Its trademark, consisting of the words “Bantam Books” and the portrayal of a rooster, is Registered in U.S. Patent and Trademark Office and in other countries. Marca Registrada. Bantam Books, New York, New York.

V
alerie Stewart saw him first when he walked into the music room, and her eyes opened appreciably in surprise.

It had to be unprecedented.

Montana’s most eligible bachelor stood near the door with one shoulder resting against the pale gray wall, his arms crossed negligently across his chest, and smiled a slow upcurving of acknowledgment. He was familiar with being conspicuous—whether for his scandalous reputation, his handsome half-breed looks, or his family’s considerable wealth, Trey Braddock-Black was habitually scrutinized.

He dipped his head in a small measured nod to the room at large, his long black hair sweeping forward briefly with the movement. Reminded of their manners, everyone quickly looked back to the bearded young man with the pince-nez, playing his newest composition on Emma Peabody’s grand piano. And for the next twenty minutes, Emma’s guests studiously avoided overt glances at Hazard Black’s disreputable son while busy minds silently contemplated which female had lured Trey to this afternoon recital. There was no question in anyone’s judgment that his unusual appearance was prompted by a woman.

Emma’s music room was large, its dove-white walls detailed in gilded molding, the parquet floor of a plume and fret motif laid by Italian workmen who had recently refurbished the Tsar’s palace at Tsarskoye Selo. Elegant banquettes covered in delicious yellow cabbage-rose silk print were informally arranged as in a drawing room with pretty, painted caned chairs from Venice scattered between the banquettes and small tables punctuating the whole so no guest need reach far for a glass of champagne or a sweet.

Among the heterogeneous guests, numerous fashionable young ladies, beautifully dressed by their mothers with their daddy’s money, languorously disposed on the yellow silk banquettes, their long, full skirts draping in colorful folds, their bonnets frilled and beribboned, appeared like so many colorful blossoms. With the melodious purity of Satie’s music swelling and flowing through the luxurious room, assessing glances strayed past the politicians, businessmen, and bankers; glossed over the matrons and dowagers; and dwelt occasionally with studied scrutiny on one or the other of the pretty young ladies. Who had he come to see?

The pretty young ladies were in universal accord—their covert glances were on the tall, dark man leaning against Emma’s wall.

So when Satie finished, when the polite clapping subsided, surreptitious reconnaissance watched and waited to see the woman.

It was a moment only before Valerie Stewart, elegant in burgundy velvet and a stylish bonnet of silk azaleas, rose and walked over to Trey.

Valerie stood very close like she always did, he thought, so one was aware of her fine breasts.

He wanted to say, “You can’t eat me alive right here in Emma’s music room, Valerie, dear,” but it would have been presumptuous and ill-mannered, so he smiled politely and said instead, “Thank you, and you’re beautiful as usual, Valerie.” Her dark hair and pale skin was enhanced by the rich burgundy. “Did you like Erik’s compositions?”

Waving her kid-gloved hand dismissively, she made a small moue. “They all sound the same, don’t you think?” Valerie’s appreciation of the arts was confined to being seen at the right receptions and recitals and understanding the finer points of jewelry appraisal.

Trey’s pale eyes widened momentarily in a swift reflex action at her crass simplicity, or more aptly, he decided an instant later, her crass discourtesy. “No, darling,” he murmured, his deep voice tinged with a cultivated insouciance, “they all sound remarkably different.”

Looking up at him from under her heavy lashes, her face delicately tipped so her best side showed to advantage, she turned the conversation to her favorite topic—herself. “Have you missed me?” It was a flirtatious, coy phrase, breathed in a husky, intimate tone.

“Of course.” The required responses came effortlessly. Pushing away from the wall, he glanced over the silk azaleas on her bonnet to the group surrounding Satie at the piano.

“When can I see you again, darling?” Her voice was honeyed, and she moved a step closer so her scent filled his nostrils.

“Later,” Trey said evasively. He was here to see his friend, not flirt, and taking a half step, he began to move around her.

Lifting her closed fan fractionally, Valerie blocked his movement. “When later?” she inquired with a pretty pout.

“Valerie, dear,” Trey said with a quick grin, touching her arms lightly, “you pout beautifully, but I came to Emma’s today
to see Erik. Come with me,” he invited with a well-bred courtesy, “and talk to him.”

“He’s only a second pianist at a Paris club,” she replied disdainfully, her values based on money, position, and dress, “and odd and disheveled … and bohemian. Why would I want to talk to him?”

“He’s also an imaginative composer,” Trey said quietly, annoyed at her bourgeois attitude. “Now, if you’ll excuse me …” and he moved her gently out of his way.

Trey had met Erik Satie at the Chat Noir in Paris the previous year, and when he’d gone up to compliment the pianist on his virtuosity, they’d discovered much in common. Born within months of each other, both were enamored of the piano, detested Wagner, adored Chopin, and resisted the conservatory method of training. Largely self-taught as a pianist, Trey was instinctively attracted to the eccentric young composer who dressed
à la bohème
, affecting flowing tie, velvet coat, and soft felt hat. Whenever Trey was in Paris, they made the rounds of the clubs and salons, and then in the wee hours, in Trey’s lodgings over Pernod and brandy, they practiced Satie’s newest works. Largely through Trey’s enthusiastic insistence, Satie had been introduced to Emma Peabody, the arbiter of avant-garde music in Helena.

A tall, ramrod-straight, gray-haired dowager, Emma spoke in blunt, brusque phrases, but she knew music, and she’d been a friend to Trey since his childhood. “Got out of her clutches, I see,” she said gruffly as he came up to greet her. “You were late.”

“Which do I answer first?” Trey said with a boyish grin.

“Neither,” she replied curtly. “Can’t tolerate Valerie. Detest lateness. Hate excuses worse. And don’t try to bamboozle me with that charming smile … I’m too old. Save it for flirts like Miss Stewart over there. He’s good,” she abruptly declared with a nod of her chignoned head, as if she were buying Satie at auction. “Damn good.”

“I
told
you.” Emma had been reluctant at first when Trey had suggested Satie for her annual recital, feeling he was too outré, and his soft reproof was amused.

“What do you know, you young pup?” she harrumphed. “You’re still wet behind the ears.”

“Know enough not to like Wagner,” he replied genially.

“Unlike Erik’s work. I thought the
Gymnopédies
was particularly fresh.”

Emma’s color subsided; Wagner’s deficiencies were discarded in favor of Satie’s splendid talent.… “His work is hauntingly simple,” she agreed, “and bold too,” she added with a brisk nod. “And then his passages of medieval dissonance appear, and it seems as though one’s transported to another time. How does he do it?”

“Wicked boy.” And she clipped him a stinging thwack on his arm with her ivory fan. “You’re going to have to mend your disreputable ways someday.” But there was a smile behind her brusque words, and her snapping brown eyes were filled with affection.