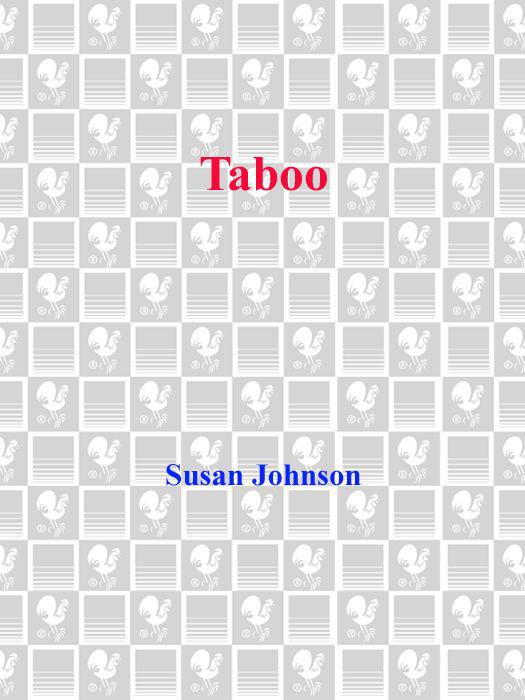 “Her romances have strong, intelligent heroines, hard, iron-willed men, plenty of sexual tension and sensuality and lots of accurate history. Anyone who can put all that in a book is one of the best!”
—Romantic Times

“Susan Johnson writes an extremely gripping story.… With her knowledge of the period and her exquisite sensual scenes, she is an exceptional writer.”
—Affaire de Coeur

“Fascinating.… The author’s style is a pleasure to read.”
—Los Angeles Herald Examiner

No part of this book may be reproduced or transmitted in any form or by any means, electronic or mechanical, including photocopying, recording, or by any information storage and retrieval system, without permission in writing from the publisher. For information address: Bantam Books.

Published simultaneously in the United States and Canada

Bantam Books are published by Bantam Books, a division of Bantam Doubleday Dell Publishing Group, Inc. Its trademark, consisting of the words “Bantam Books” and the portrayal of a rooster, is Registered in U.S. Patent and Trademark Office and in other countries. Marca Registrada. Bantam Books, 1540 Broadway, New York, New York 10036.

Excerpt from
Seduction in Mind

As some of you may know, during the research for my previous book,
Wicked
, I became infatuated with General Andre Massena. I knew I wanted to write a story based on some of the events in his life and in
Taboo
, the hero Andre Duras is my interpretation of Andre Massena. I changed his name in order to give myself a bit more literary license since a strict adherence to historical fact limits the imagination.

So it may be confusing to see Andre Massena in
Wicked
become Andre Duras in
Taboo
. But I hope you can make the adjustment in your mind.

I walked over the battlefields and the streets of the towns and villages where Massena lived and fought those months during the campaign in Switzerland and tried to see it all through his eyes. I traveled to Nice, his birthplace, where a small museum has a very few artifacts from his life. But what astonished me was my discovery that a Niçois face exists. It was extraordinary to see people on the streets of Nice with faces similar to that of Massena. Two men passing by in the lobby of our hotel could have been him—the same build, height, face, hair color. I almost stopped them and hugged them.

Massena’s tomb in Père Lachaise in Paris is impressive in its simplicity, the white marble obelisk marked only with his name and his four most important victories—Rivoli, Zurich, Genoa, Essling. At each of those battles his courage, boldness, and determination saved France.

I hope you enjoy this glimpse of the man as well as the woman who introduced him to the wonders of love.

In 1789, directly after the French Revolution, the great powers, despite their hostility toward the new republican government, were too involved elsewhere to intervene. Austria and Russia were at war with the Ottoman Empire in a grandiose effort to partition the Turkish state. Prussia and England opposed this expansion and encouraged Sweden to attack Russia. War seemed imminent when the Prussian emperor signed a treaty with the sultan calling for the liberation of all Turkish territory.

But England refused to support Prussia since the British themselves were on the verge of war with Spain over the control of Nootka Sound on the Pacific coast.

Fortunately all this bickering allowed France a measure of respite.

By the spring of 1791, the eastern crisis had been settled
by diplomatic means and Austria was prepared to intervene in France. However, another year passed before all the powers interested in invading France could agree on strategy, vital interests, and the division of spoils.

The French Assembly was equally divisive and self-serving. Most French leaders regarded war primarily as a means of attaining political power at home. Strategic and diplomatic considerations played a secondary role. To compound French problems, the nation’s armed forces were in such disarray that it was doubtful if the army could carry out the task of defending the state from invasion. Overlooking such critical issues, the Assembly voted overwhelmingly for war on April 20, 1792.

The allied army’s main invasion force against France consisted of a huge, slow-moving supply train, obsolete artillery, and many Prussian officers who hadn’t experienced serious combat for thirty years. Regardless of their deficiencies, including their cautious, methodical tactical system, the allies won battle after battle, advancing inexorably toward Paris. The French army, comprised essentially of inexperienced, untrained volunteers, proved unreliable in battle. Until the morning of September 20 at Valmy, when the French lines and field guns repulsed two waves of Prussian attack.

Valmy was a watershed, a momentous victory for the new French nation. The first effort of the European powers to crush the Revolution had been defeated.

Over the course of the next twenty-three years, until Napoleon’s final defeat at Waterloo, various combinations of nations made war against the French Republic. England was the driving force behind the First Coalition, organized in early 1793 with Austria, Prussia, and Spain. Other powers eager for spoils hastened to enter the alliance: the Papal States, Naples, Tuscany, Parma, Modena, Sardinia, Portugal. But mutual suspicions, differing ambitions, and deepening rivalries plagued the participants. By mid 1795, only Austria
and England continued to fight, and in October 1797, Austria signed a peace treaty with France. France was now the dominant power in western Europe.

But Napoleon’s disastrous Egyptian expedition in 1798 changed the balance of power and gave new hope to France’s enemies. Russia and Turkey temporarily ended their age-old rivalry and together went to war against France. Austria saw the French defeats as an opportunity to reenter the war on advantageous terms. And England found itself in an excellent position to devise a new coalition. By the end of 1798, Austria, Russia, and England had agreed on a set of common war aims.

And in Paris dawned the realization that hostilities would begin as soon as the Russian corps reached Austria.

This is the precipitating factor for the events in the novel you are about to read. As the story opens, a French army division has been headquartered in Sargans, Switzerland, and General Andre Duras is preparing for the renewal of war.

General Duras looked up from the maps spread over his desktop, his dark gaze piercing. “Korsakov’s
wife?
”

“In all her glory,” his aide-de-camp said, grinning. “She’s in your parlor. Beauve-Simone couldn’t think of another room in camp suitable for a Russian countess wrapped in sables.”

“How the hell did she turn up fifty miles behind enemy lines?”

“Her Cossacks apparently took the wrong turn at Bregenz. Her carriage is elaborate—a bed, food, a maid … very self-sufficient. They had no need to stop anywhere so weren’t aware of their error. Beauve-Simone’s troop intercepted them at the bridgehead north of town.”

Duras leaned back in his chair and sighed. “Her timing
could have been better. We’re attacking along the whole front in three days. Jesus, I can’t send her back
now
.”