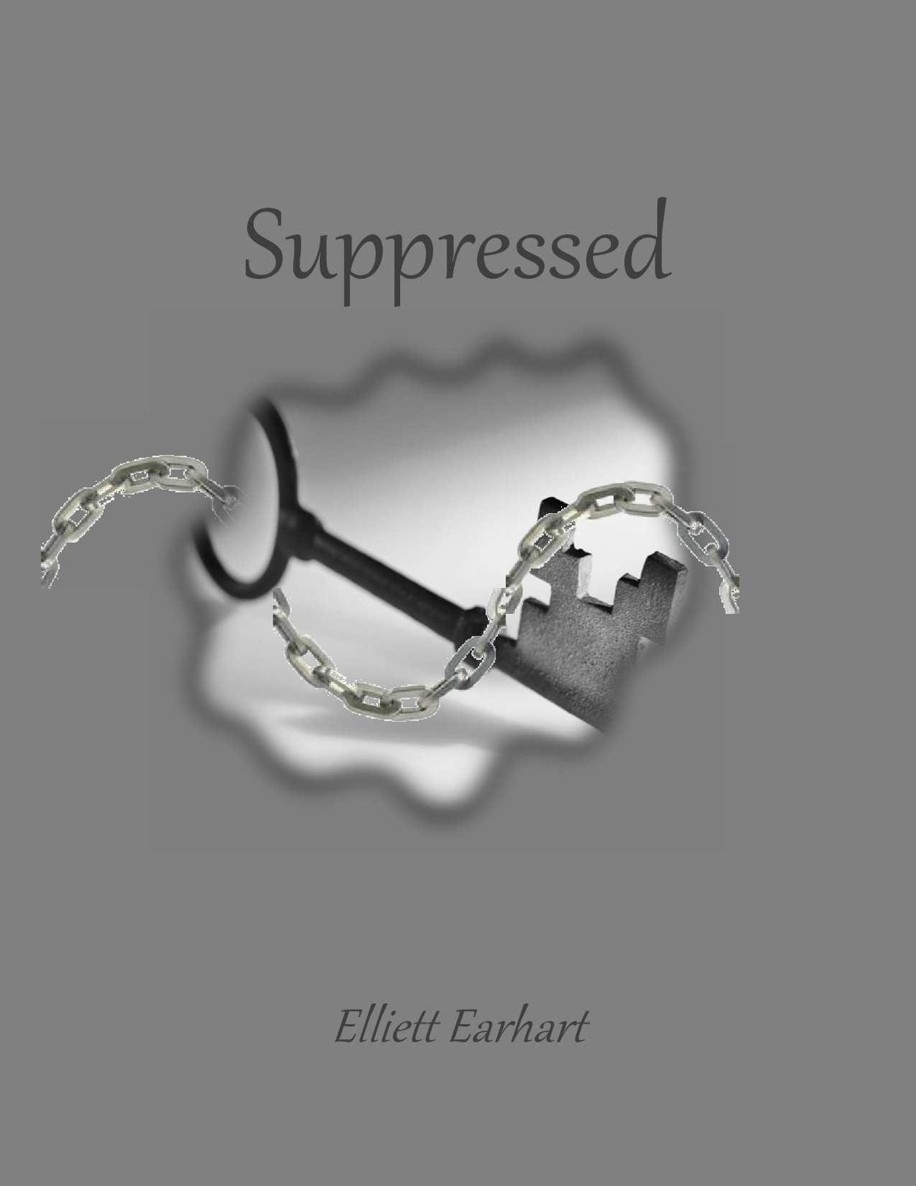 Suppressed is a work of fiction. Names, characters, places, and incidents are products of the author’s imagination or are used fictitiously. Any resemblance to actual events, locales, or persons, living or dead, is entirely coincidental.

All rights reserved. No part of this book may be reproduced or transmitted in any form or by any means electronic or mechanical, including photocopying, recording, or by any information storage and retrieval system, without written permission from the author.

Every decision has a consequence.

Whether the consequence comes a minute, a week,

A month, or six years later, it always comes.

And if you aren’t prepared for it your whole life could be undone.

Hate. No one ever really, honestly, knows what hate is. Everyone says they hate something at least once in their life. There had been times in my own life when I would randomly say I hated something or someone but that was just in the heat of the moment when things didn’t go my way.

Hate is a strong word, or so you’re told when you’re younger by your parents. But in reality it is, it’s one of the strongest words ever created. Hate is a decision, a decision to despise. I never thought I would actually hate, but sometimes you make that decision on a whim, a sudden impulse. A decision like that could change your life forever; in more ways than you could ever imagine…

My life was pretty good, I couldn’t complain. I was in my final year of college and graduating in just four months from BU; Boston University. Soon I would have my masters in graphic design and my bachelors in photography. I’ll admit I’m smart, there’s no denying that. That was one of the only things I would ever admit to anyone about myself. Brian’s ran in my family. My dad is a college professor back in Maine and my mom owns her own art gallery. I have two brothers, Lance and Shane. Shane, my older brother, lives in New York. He’s a financial investor, or something like that, and works with numbers, complicated ones. Lance is a year younger than me. He’s also smart but never likes to show it, Lacrosse and partying take up most of his time. He’s my favorite; I know it’s sad to say you have a favorite brother, but he is. Lance goes to BU with me but his major is physical health. Even though he’s much larger than me I still felt protective over him. Any girl who dared looked his way I always had an evil glare for. I didn’t want to be the overbearing older sister so I tried to set myself some boundaries as best I could.

I lived on campus and had a bouncing, quirky roommate, Ashley. She was the definition of crazy. I loved her to death but she was a party animal. I had no room to talk though, I was prone to partying just as much as her and my mouth had a tendency to run off and not say some pretty things.

It was Saturday morning. I had just walked in my dorm room and threw a bakery bag on top of a sleeping Ashley.

“
Get up.” I said just loud enough for her to hear.

She let out a groan as I went and sat down in my big, cushiony chair that was in the corner of our dorm. I sipped my coffee waiting for her to pop her curly blonde head up.

She finally flipped her head over on the pillow to face me, “It’s Saturday. I need my beauty sleep if we’re going to the party at Lowell house tonight.”

“
I want to go shopping and I told Lance I would meet him for lunch at Panaera.” I poked out my bottom lip to hide the grin that wanted to surface at the mention of my brother’s name.

Just as I expected she sat up like a bolt of lightning. “Well you don’t have to twist my arm about it.”

I laughed to myself. Ashley was infatuated with my brother. But it was nothing more than that, an infatuation. He was her eye candy and all she wanted to do was just sit there and stare at him. She knew better than to try anything with him or else I would rip her hair out.

After throwing on some jeans and a t-shirt she pulled her hair up in a messy bun and slid her sunglasses down over her eyes.

“
Let’s go!” she said waving her hands frantically in the direction of the door.

I hopped up from my chair and slid my sunglasses down while comically shaking my head.

A short walk later I was flipping through the racks of a boutique, trying to decide if I wanted the dark purple dress or the black one. I really didn’t care what I wore but felt like I needed something new.

“
Rachel told me there was a new hottie in her sociology class.” Ashley piped up from the other side of the rack.

“
Mmhhmm” I said to myself.

“
Maybe he’ll be at the party tonight.”

I still wasn’t paying much attention to her but replied anyway. “Maybe”

“
Callie said she saw him yesterday too.”

I nodded againtrying to keep with pretending I was listening. All these people she was referring to were my friends, but secretly they all irritated me. I wasn’t two faced and never expressed this opinion to anyone but they were all just so snooty and judgmental. It was hard not to be at least a little irritated. Ashley was the only friend who I could actually tolerate. Sometimes whenever some of the girls would talk I would drown them out and act as if they didn’t exist. I had a way of putting on a pretty face around other people so they could never tell what was really going through my mind.

That was another thing about me, I rarely ever showed or told my true feelings. I wasn’t an open book; I was closed, sewn shut. When I was little my mom would make me watch those sappy soap opera shows. All the women on them were so gullible, they gave their heart away time and time again and in the end the same thing always happened, it got broken; and all because they made themselves vulnerable. At the time I was too young to realize soap operas were fake, but right then I made the decision to never give my heart to anyone. As I got older I found that it wasn’t as fake as I thought. Almost everyone I knew had their heart broken one way or another. So I kept with my decision and never allowed myself to fall in love.

“
Do you like the black or the purple?” I said holding up the two dresses.

“
Cam, you could wear a trash bag and still be the hottest one at the party. The purple.”

I let out a small sigh. I didn’t like when people told me stuff like that. Yeah I tried to look nice but people always told me how beautiful I was and I didn’t like hearing it. I wasn’t a self centered or vain person, being that way would get you nowhere in life.

I already had a pair of black heels to go with the dress so I didn’t bother picking any out. Ashley got a bright yellow dress that made her blonde hair look extra vibrant.

After leaving the store we headed over to Panaera. The second we stepped in I started looking around for Lance. Eventually I spotted him sitting at a booth in the corner with his head leaned back and his eyes closed. I lightly smacked him upside his dirty blonde head as I walked by to take my seat across from him.

“
Hey!” He jumped a little and gave me an evil but playful glare.

“
How’s it goin?” I asked. Ashley took the seat next to me and I noticed her patting her hair to make sure it looked halfway decent.

“
Alright, I went to that new bar Dagger last night. It was pretty lame.”

“
Is that why you’re trying to fight the hangover right now?”

“
Bite me.” He took a sip of his water and gave Ashley a nod. She smiled brightly at him causing me to laugh inside my head.

The waiter came up and took mine and Ashley’s drink order and then came back minutes later to take our food order.

“
So are you all coming tonight?” Lance asked.
The party tonight was at Lowell house, the fraternity that Lance was a part of. I cringed the day he told me he was joining. I had a lot of friends that were in sororities and fraternities but never gave a second thought to joining one. That would make me way to close to the ‘oh so fake’ people of the world.

“
Yeah, I just don’t understand why you have to have a party for every little thing. I mean, the start of second semester isn’t what I would call a reason for celebration.”

“
You know them. They like to have a reason to celebrate.”

“
Someone does laundry in that house and they find a way to celebrate about it.” I joked.

Lance reached forward and tapped my hand, “Well you don’t seem to have a problem with coming to any of the parties so quit complaining.”

I leaned back and l let out a yawn at the same time Ashley leaned forward. “So have you seen the new guy yet?”

“
You mean Eric? Yeah I have Bio with him. He’s pretty cool. I invited him tonight so he’ll be there. Why, do you want me to introduce you?” He jumped his eyebrows up and down with a sly grin.

She looked a little flustered at the fact my brother was attempting to try and fix her up.

The waiter came over with our food and we ate while having random chit chat. My brother was like me, he didn’t like when people told him he was a looker. He had an athletic build and dirty blonde hair. His eyes were a light blue and he had these little dimples when he smiled. Girls swooned over him and I could help but laugh sometimes when they tried so hard to get his attention. The only thing we had in common looks wise was our skin color. We both had an almost olive skin tone. It wasn’t too tan but it wasn’t too fair either.

My hair was light brown and mostly straight. Sometimes it had a bit of wave to it but it was controllable. My eyes were green and had a hint of brown, it was strange. The only real obsession I had with myself was my teeth. I was blessed with perfectly straight teeth and felt like they could never be whiter. I couldn’t stand people who didn’t take care of their teeth.

After we were done eating I paid for the bill and we sat there for a couple minutes before heading off.

“
So are you coming with me back home for mom’s birthday?” Lance asked randomly.

I felt like a horrible daughter, I couldn’t even remember when my own mother’s birthday was.

He shook his head disapprovingly as he stood up. “Two weeks.”

“
What? I have a lot going on.” I explained to his disappointment.

Beware of Virtuous Women by Kasey Michaels
The Third Kingdom by Terry Goodkind
All Hallows Eve: A Krewe of Hunters Novella (1001 Dark Nights) by Heather Graham
A Match Made in Heaven by Colleen Coble
Samurai William: The Englishman Who Opened Japan by Milton, Giles
My Almost Epic Summer by Adele Griffin
The Notebooks of Leonardo Da Vinci by Da Vinci, Leonardo
A Madam into a Mistress by Nadia Aidan
Lost and Found in Prague by Kelly Jones
Life Penalty by Joy Fielding