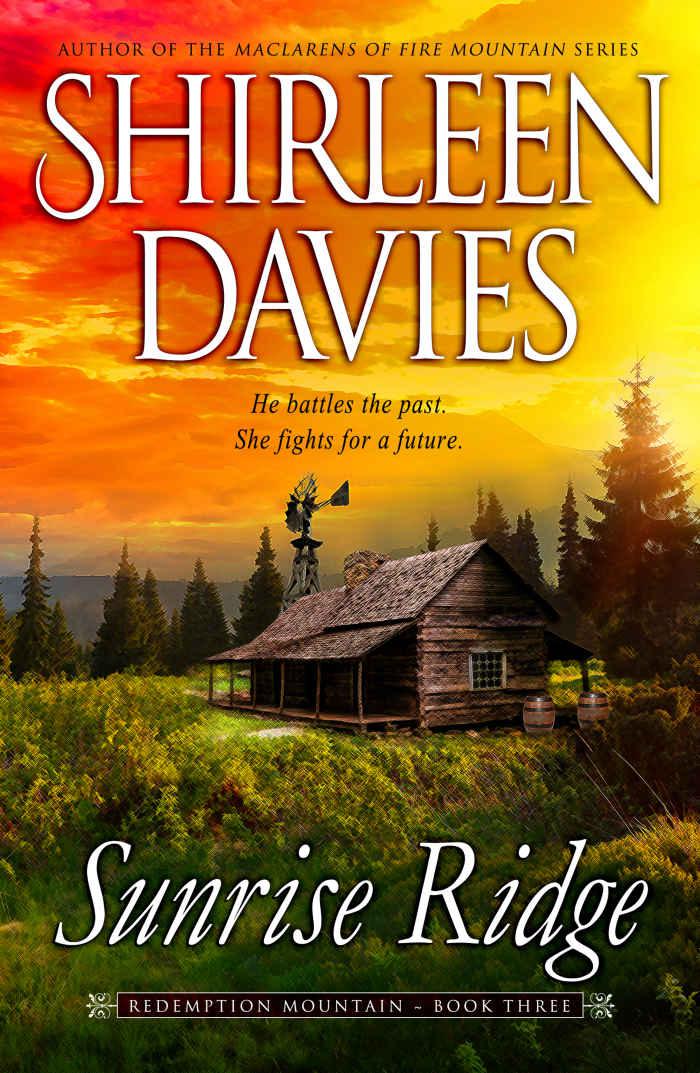 Tougher than the Rest, Book One

Faster than the Rest, Book Two

Harder than the Rest, Book Three

Stronger than the Rest, Book Four

Deadlier than the Rest, Book Five

Wilder than the Rest, Book Six

All Your Nights, Book Four

Reclaiming Love, Book One, A Novella

Book Three in the Redemption Mountain

Sunrise Ridge is a work of fiction. Names, characters, places, and incidents are either products of the author’s imagination or used facetiously. Any resemblance to actual events, locales, or persons, living or dead, is wholly coincidental.

Book design and conversions by Joseph Murray at
3rdplanetpublishing.com

I care about quality, so if you find something in error, please contact me via email at [email protected]

“
The author has a talent for bringing the historical west to life, realistically and vividly, and doesn’t shy away from some of the harder aspects of frontier life, even though it’s fiction. Recommended to readers who like sweeping western historical romances that are grounded with memorable, likeable characters and a strong sense of place
.”

Noah Brandt
is a successful blacksmith and businessman in Splendor, Montana, with few ties to his past as an ex-Union Army major and sharpshooter. Quiet and hardworking, his biggest challenge is controlling his strong desire for a woman he believes is beyond his reach.

Abigail Tolbert
is tired of being under her father’s thumb while at the same time, being pushed away by the one man she desires. Determined to build a new life outside the control of her wealthy father, she finds work and sets out to shape a life on her own terms.

Noah has made too many mistakes with Abby to have any hope of getting her back. Even with the changes in her life, including the distance she’s built with her father, he can’t keep himself from believing he’ll never be good enough to claim her.

Unexpected dangers, including a twist of fate for Abby, change both their lives, making the tentative steps they’ve taken to build a relationship a distant hope. As Noah battles his past as well as the threats to Abby, she fights for a future with the only man she will ever love.

This book is dedicated to all of my friends and family who continue to encourage me and spread the word about my writing. Your support means more to me than you know.

Thanks also to my editor, Kim Young, proofreader, Alicia Carmical, and all of my beta readers. Your insights and suggestions are greatly appreciated.

As always, many thanks to my wonderful resources, including Diane Lebow, who has been a whiz at guiding my social media endeavors, my cover designer, Kim Killion, and Joseph Murray who is a whiz at formatting my books for both print and electronic versions.

Other Books by Shirleen Davies

Major Noah Brandt peered down the long barrel of his Sharps rifle, sighting his target, adjusting for the wind. As a Union Army sharpshooter, orders to kill a specific threat to the North’s cause had become commonplace. His battlefield promotion to major didn’t excuse him from raising the rifle to his shoulder and carrying out the command.

That morning, he’d received orders to send forward a detachment of one hundred sharpshooters to determine enemy positions. Posting his men on a hill past Emmitsburg Road, it didn’t take long for them to engage a heavy force of Confederate troops.

Noah took a breath, ignoring the smoke already impeding his vision. He sighted down the barrel once more, then squeezed the trigger, watching as the man clutched his chest and toppled from his horse. Another Confederate officer leaving this earth to stand before his maker, and another piece of Noah leaving with him.

Over the course of nearly six hours, Noah sighted again and again, dispatching more Johnny Rebs, including several officers. He walked up and down the line of sharpshooters, encouraging them, and watching as each advancement of southern troops was held at bay…sometimes retreating, occasionally advancing. He estimated for every ten casualties the enemy sustained, the sharpshooters sustained one. He expected nothing less. His troops were the best at what they did, having passed rigorous skill tests to be accepted into Berdan’s First United States Sharpshooters Regiment.

“Major, we’re running low on ammunition. What’s your order?” Captain Norquist came up beside him, crouching low as enemy fire spewed overhead. Noah had met Tom Norquist within a month of volunteering. They’d followed each other through the ranks, from battle to battle, and became close friends. Noah trusted him implicitly, valuing his instincts on the battlefield.

“How much longer can we sustain the effort?” Noah asked, noticing enemy movement on both flanks.

“Call the men back. We’ll report our findings to the commander.” As Noah shouted the last order over the thundering explosions and screaming troops, he saw Tom spin, pull his revolver, and fire toward a group of rebels fighting their way over the hilltop.

Noah dropped to a knee, aimed his rifle and fired, dropping one rebel as he pulled his Remington .44, then killing two more, watching as the remaining troops turned and ran.

“Good work, Tom. If you hadn’t…” Noah’s words died on his lips as he looked to his side, finding Tom prone and bleeding from wounds to his chest and arm. “Tom!” Noah’s anguished cry could be heard over the gunfire as he dropped to the ground, placing his hands over the wound in Tom’s chest, several of his men forming a circle around them, providing cover.

“Major, we must move out. The rebels are advancing and we’re out of ammunition.” One of Noah’s lieutenants kneeled beside them, checking Tom’s pulse and shaking his head. “He’s gone, sir. There’s nothing we can do for him.” His urgent voice pierced the pain Noah felt deep in his gut.

He nodded, then stood, signaling his men to retreat, knowing he needed to report the large number of Confederate forces to his division commander.

“Take the captain’s rifle and lead the men to the encampment, Lieutenant. I’ll follow behind. Do not wait for me.” Noah handed the man his own rifle and knelt down, shoving his arms under Tom’s body and lifting.

“Sir, we can’t leave without—”

“I gave an order and I expect you to carry it out. Understood?” Noah growled as he held Tom close to his chest.

“Yes, sir.” He recognized the stern expression, accepting there’d be no changing the major’s mind.

Noah barely noticed his men move out or the continuing sound of the battle behind him. His expression grim, he concentrated on the man in his arms, his heart aching to a point he found it hard to breathe. It would be up to Noah to write a letter to Tom’s widow, a woman he’d never met, but felt as if he knew. She’d break the news to their young son and somehow find a way to move on. They all had to.

Noah trudged into camp as the sun dropped behind the low ridge to the west. No one disturbed him as he passed men cleaning their weapons, cooks ladling supper to the hungry troops, and the chaos inside the medical tent.

He hesitated outside the makeshift hospital, looked at Tom’s face, and leaned down to whisper in his ear, “I won’t forget you, my friend.”

A nurse saw the action, touched his arm, and indicated a cot a few feet away. “We’ll take care of him.”

Noah placed him on the cot and glanced at her, his face a mask. “He’s gone.”

“I know, Major.” Her soft words drifted over him as he took one last look and turned away, making his way to his tent and solitude.

Noah lowered himself to his cot, leaning forward and resting his elbows on his knees, burying his face in both hands. He had until the end of the month, then his commitment would be over.

Even his promotion to major a few months before did nothing to change Noah’s mind. He’d come into the Sharpshooters as a volunteer, and he’d made the decision to voluntarily leave. After three years, he’d done his duty, performing beyond his commander’s expectations. But each kill took a piece of his soul.

He was proud of his accomplishments, would have made the decision to volunteer again, but he was through. By the end of July, Major Noah Brandt would transform himself into a private citizen, leaving military life behind and creating a new direction for his life—if he survived until then.

When the day came, all he had to do was change into civilian clothes, fold his uniform, grab his gear, and mount Tempest, the gelding he’d entrusted with his life more than once. If their plans held true, he’d meet his lifelong friend and they’d ride west, away from the battlefields, carnage, and command. He had no idea where he’d end up but, after today, anywhere would be better than here.

“Damn it, Noah. You’ve got to find a way to pull yourself out of this hole you’re in and figure out what you want.” Gabe Evans, the sheriff in Splendor and Noah’s closest friend, watched him stand by the forge, sweat thick on his face and arms, heating the metal until he’d be able to pound it into another useful tool.