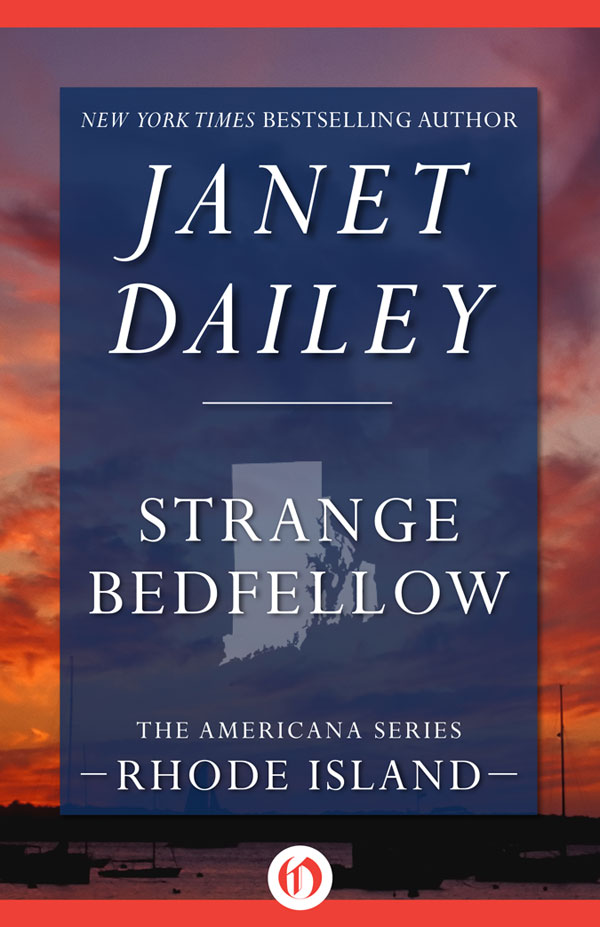 Valley Of the Vapours (Arkansas)

After the Storm (Colorado)

Night Of The Cotillion (Georgia)

The Bride Of The Delta Queen (Louisiana)

A Tradition Of Pride (Mississippi)

One Of The Boys (New Jersey)

Beware Of The Stranger (New York)

The Widow And The Wastrel (Ohio)

To Tell The Truth (Oregon)

The Thawing Of Mara (Pennsylvania)

With A Little Luck (Wisconsin)

For Bitter Or Worse

Introducing JANET DAILEY AMERICANA. Every novel in this collection is your passport to a romantic tour of the United States through time-honored favorites by America's First Lady of romance fiction. Each of the fifty novels is set in a different state, researched by Janet and her husband, Bill. For the Daileys it was an odyssey of discovery. For you, it's the journey of a lifetime.

When I first started writing back in the Seventies, my husband Bill and I were retired and traveling all over the States with our home—a 34’ travel trailer—in tow. That's when Bill came up with the great idea of my writing a romance novel set in each one of our fifty states. It was an idea I ultimately accomplished before switching to mainstream fiction and hitting all the international bestseller lists.

As we were preparing to reissue these early titles, I initially planned to update them all—modernize them, so to speak, and bring them into the new high-tech age. Then I realized I couldn't do that successfully any more than I could take a dress from the Seventies and redesign it into one that would look as if it were made yesterday. That's when I saw that the true charm of these novels is their look back on another time and another age. Over the years, they have become historical novels, however recent the history. When you read them yourself, I know you will feel the same.

So, enjoy, and happy reading to all!

THE AIR WAS CLEAR and the moon over Rhode Island was new, but there was a tangle of cobwebs in her mind. Dina Chandler couldn't seem to think her way out of the confusion. She shut her ears to the voices quietly celebrating in other parts of the house and stared out the window.

A shudder passed through her. It couldn't have been from the night's chill, since the house was comfortably heated. Her blue eyes slid to her arms, crossed in front of her, hugging her middle. Perhaps it was the cold weight of the precious metal around her finger.

Dina turned from the window. Her restless gaze swept the library, noting all that was familiar. Interrupting the dark, richly paneled sides of the room was a wall of bookshelves, floor to ceiling. A myriad of deeply toned bindings formed rows of muted rainbows. A sofa covered in antique velvet faced the fireplace, flanked by two chairs upholstered in a complementing patterned fabric. In a corner of the room stood a mahogany desk, its top neat and orderly.

The door to the library opened and Dina turned. Her hair shimmered in the dim light, a paler gold than the ring on her finger. A pang of regret raced through her that her solitude had been broken, followed by a twinge of remorse that she had felt the need to be alone at this time.

Closing the door, Chet Stanton walked toward her, smiling despite the faintly puzzled gleam in his eyes.

“So this is where you've got to,” he murmured, an unspoken question behind the indulgent tone.

“Yes,” Dina nodded, unaware of the sigh in her voice, or how forced her smile looked.

As he came closer, her gaze made a detached inspection of him. Like hers, his coloring was fair, sandy blond hair falling rakishly across his forehead, always seeming to invite fingers to push it back in place. His eyes were a smoke blue as opposed to the brilliant shade of hers.

At thirty-six, he was twelve years her senior, a contemporary of Blake's, but there was a boyish air about him that was an integral part of his charm. In fact, it was with Blake that Dina had first met Chet. The cobwebs spun around that thought to block it out. Slim and supple, Chet was only a few inches taller than she was in her heels.

He stopped in front of her, his intent gaze studying her expressionless face. Dina was unconscious of how totally she masked her inner turmoil. As his hands settled lightly on her shoulders, she was passive under his touch.

“What are you doing in here?” Chet cocked his head slightly to the side, his gaze still probing.

“That's forbidden.” His hands slid around her and Dina yielded to his undemanding embrace, uncrossing her arms to spread them across his chest.

Why not? His shoulder had become a familiar resting place for her head, used often in the last two and a half years. Her eyes closed at the feathery caress of his lips over her temple and cheek.

“You should be in the living room noisily celebrating with the others,” he told her in mock reproof.

Dina laughed softly in her throat. “They're not ‘noisily’ celebrating. They don't ‘noisily’ do anything, whether it's rejoice or grieve.”

“Perhaps not,” he conceded. “But even a restrained celebration should have the engaged couple in attendance, namely you and me. Not just me alone.”

His shoulder wasn't as comfortable as it had seemed. Dina turned out of his unresisting embrace, nerves stretching taut again as the niggling sense of unease and confusion wouldn't leave. Her troubled gaze searched the night's darkness beyond the windowpanes as if expecting to find the answer there.

With her back turned to him, she felt Chet resting his hands on either side of her neck, where the contracted cords were hard bands of tension.

“Relax, honey. You've let yourself get all strung up again.” His supple fingers began working their magic, gently kneading the coiled muscles in her neck and shoulders.

“I can't help it.” A frown puckered her forehead despite the pleasant manipulations of his hands. “I simply don't know if I'm doing the right thing.”

“Of course you are.”

“Am I?” A corner of her mouth lifted in a half smile, self-mocking and skeptical. “I don't know how I let you talk me into this engagement.”

“Me? Talk
you
into it?” Chet laughed, his warm breath fanning the silver blond strands of her hair. “You make it sound as if I twisted your arm, and I'd never do that. You're much too beautiful to risk damaging.”

“Flatterer!” But Dina felt old, old beyond her years.

“And I know I agreed willingly to this engagement,” she admitted.

“Willingly but hesitantly,” added Chet, continuing the slow and relaxing massage of her shoulders and neck.

“I didn't rush you into a decision. I gave you all the time you wanted because I understand why you felt you needed it,” he reasoned. “And there won't be any marriage until you set the date. Our agreement is a little more than a trial engagement.”

“I know.” Her voice was flat. Dina didn't find the necessary reassurance in his words.

“Look—” Chet turned her to face him “—I was Blake's best friend.”

Yes, Dina thought. He had been Blake's right arm; now he was hers. Always there, ready to support her decision, coaxing a smile when her spirits were low and the will to go on had faded.

Granddad's House (On Geneva Shores) by Vale, Kate
The Black Morass (Pirates of the Coast Book 1) by Barbara Devlin
Cold Hunter's Moon by K. C. Greenlief
Young Fredle by Cynthia Voigt
The Three of Us by Joanna Coles
Blood and Snow 6: Masquerade's Moon by Workman, RaShelle
Driving to You (H1.5) by Marquita Valentine
The Tale of the Vampire Bride by Rhiannon Frater
A Surprise for Lily by Mary Ann Kinsinger
Love Will Find a Way by Barbara Freethy