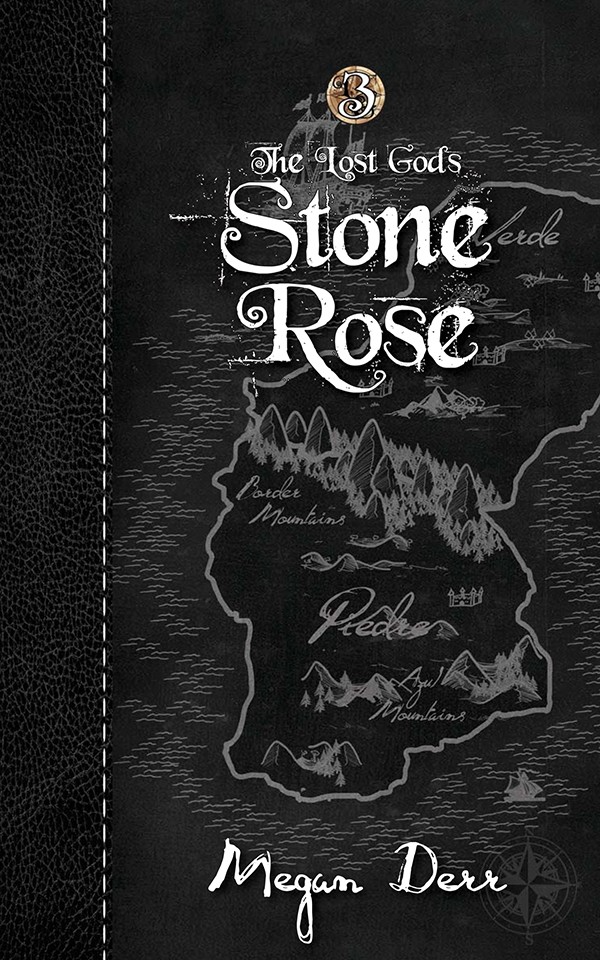 Chapter One: The Basilisk Prince

Nine gods ruled the world, until the ultimate betrayal resulted in their destruction. Now, the world is dying and only by restoring the Lost Gods can it be saved.

The Kingdom of Piedre has been torn apart by feuding since the Basilisk was found dead. The Brotherhood of the Black Rose seeks to ensure the Basilisk is destroyed forever, while the Order of the White Rose searches desperately for a way to restore him.

The latest mortal incarnation of the Lost God of Death is Prince Culebra, the Basilisk Prince. Plagued by assassins, one lover dead and the other gone, Culebra spends his days in despair, painfully aware that his predecessors died only one of two ways: murder or suicide. 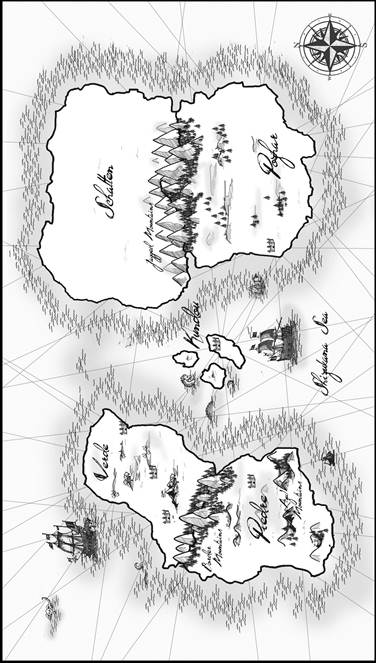 Chapter One: The Basilisk Prince

Culebra woke with his breath lodged in his throat, tense and afraid—then he registered the smooth, warm feel of Ruisenor's scales all around him. He'd fallen asleep lying with Ruisenor beside the fire. Whatever, or whoever, had woken him would not get past Ruisenor. No one did. Those who were actually brave enough to try would feel her great fangs and die a very slow, very painful death.

He listened, keeping his breathing low and even, heart thudding too fast in his chest. There. Footsteps on the rug in the front room, trying hard to remain silent as the intruder crept closer to the bedroom, but he was no match for a man who relied heavily on his hearing to make up for his lack of sight. Culebra listened as the intruder stopped at the threshold, hesitated, and then padded further into the room. He heard the hiss of steel being drawn from leather.

Culebra could taste the acrid flavor of the intruder's fear. Whoever the intruder was, he wasn't very good at his job. Assassins must have been getting increasingly difficult to find. No wonder, given that Culebra could no longer count the number who had died trying to kill him.

He waited until he heard the man rifling around in the bedding, the muffled thump of blankets hitting the floor, waited until he knew the man finally realized the bed was empty. "Looking for me?" Culebra asked, rolling away as Ruisenor stirred, unwound her heavy coils, and slithered toward the intruder.

The stench of fear grew sharper, mingled with the bittersweet taste of death. Culebra could not see it, but Dario had described to him a number of times the way Ruisenor moved forward slowly, her eyes glowing as she struck forward at the last moment, nearly too fast to follow.

Her victims never protested, paralyzed by fear as they were. Like all the would-be assassins before him, the intruder cried out in pain and died whimpering. Culebra felt him die, flicked his own tongue out to taste it, bitter and sweet. It was the part he most hated about himself:  that he could feel the moment when a death was coming, that he loathed it and yet did not. Some part of him was comfortable with death, drew ... something ... from every death he tasted.

The whisper of scales across carpet drew closer, and Culebra stretched out a hand to stroke and pet Ruisenor as she twined around him. She hissed softly and rubbed her head against his cheek before resting it on his shoulder. "Thank you, beautiful," Culebra whispered, stroking her smooth, warm scales over and over. His beautiful Ruisenor.

She terrified all who saw her, minus a precious few. Culebra had been told often that he would do better to get rid of her before she turned on him, or at least keep her locked up with the other snakes. Culebra ignored the warnings and admonishments. Ruisenor had found him as a boy when he'd had not a single, friendly person in his life. His father and brother were polite at best, and his mother had refused to have anything to do with him. No one else would associate with him, either scared of him or scared of being caught in the crossfire. Since his father had retired and ceded the throne to his brother a year ago, life had not improved. He and his brother had never gotten along.

Ruisenor was all he'd had until he was assigned two permanent bodyguards at the age of sixteen: Granito and Dario. But thinking about them still hurt too much.

As Ruisenor slid away again, no doubt off to inspect her kill, Culebra took the seven steps from one side of the space in front of the fireplace to the other. He reached out, touched the armchair he'd sought and, after a moment, found the dressing robe he'd left there. Pulling it on, he tied the belt and left his bedroom.

He walked through his private sitting room and out into the receiving room, the smell of death that had teased him getting stronger. The door to his private chambers was closed, and he pulled it open slowly in case someone living still lingered there. But all he tasted was death. He flicked his tongue out and breathed it in deeply. Three bodies, two of them the guards who had been assigned to his room for the night. The third did not smell familiar, but he did smell dirty and faintly of cheap alcohol. So the intruder had actually been a pair, but one of them had been felled by the guards.

Strange that the guards had not managed to raise a cry, yet had managed to kill one of the assassins, but he had no way of knowing what had transpired.

Culebra frowned and closed the door again, and then walked fifteen steps to the bell pull in the corner of his receiving room. He pulled it once, the signal that something was wrong, and then walked over to one of the two sofas. Sitting down, he folded his hands in his lap and waited.

Helplessly, his thoughts went to Dario. He would give anything to have Dario at his side again. But he didn't deserve it, not when Granito was dead because of Culebra. Dario and Granito had been inseparable, two halves of a whole. They might have been born a few years apart, but anyone could see the brothers had shared a soul. Culebra had loved them so much. Still loved them more than anything in the world. But protecting him had cost Granito his life, and losing Granito had shattered Dario.

What right did Culebra have to the pieces? He didn't, and so he'd set Dario free. But that didn't stop the constant ache, the feeling that a part of him was missing. He still could not even sleep in his own bed. It felt unbearably large and lonely after having spent every night sandwiched between his bodyguards—his lovers.

Just sixteen when he had been assigned the pair, and he'd already gone through so many bodyguards by then. Most simply could not endure the stress of so many assassins. Attacks on royalty were not unusual, but back in those early days the Brotherhood of the Black Rose had tried much harder to kill him. That he'd only been a child had not mattered to the Order—indeed, it had been better, because as a child he had been much weaker and not yet a true threat.

The Brotherhood had not anticipated Ruisenor, who had found him when he was only six. Neither had it anticipated the two men who walked into his life and, for once, remained a part of it. For three years they had been his bodyguards, and more slowly, his friends. It was as his twentieth birthday approached that they began to make the three of them so much more. The memories were like knives, but like the taste of death on his tongue, Culebra loved and hated them in equal measure.

The door opened after a cursory knock, and Culebra gratefully focused on his visitor, shoving the memories aside for the moment. The new arrival smelled like cheap sangria and cheaper cigarettes with a hint of the rough soap used to clean the palace uniforms—and as if his clothes were cleaned more often than the person who wore them. "Thank you for coming. Who are the three dead men in the hallway?"

"Two guards and the intruder they stopped," the man said.

Culebra ignored the undercurrent of accusation in the guard's mostly deferential tone. He was tired of being treated as if he was to blame for all the deaths, but knew there was nothing he could do about it. People tried frequently to kill him and more people died defending him, and practically everyone saw that as his fault. "One of the intruders," he corrected. "The second one is in my bedroom. Be careful when you go to examine him; Ruisenor is still in there and she is rather possessive of her kills."

The guard made a noise as if he'd cut off words just before voicing them and obediently left to look at the body in Culebra's bedroom. The stench of fear and unwashed skin lingered, and Culebra grimaced.

A brief time later the guard reemerged, the smell of his fear stronger than ever. Only Granito and Dario had learned to stop fearing Ruisenor. "Highness, I apologize for the failure of my guards to protect you."

"No," Culebra said. "The apology is mine, as ever. Your men did not deserve to die, and I am sorry they did."

"I will send men to collect the bodies. Shall I summon your brother, highness? He will want to know there has been another attack."

"No, that won't be necessary. Neither will new guards. I cannot imagine that assassins would strike twice in one night. Let the guards and my brother sleep. Ruisenor will be enough to guard me the rest of the night. Thank you."

"Highness," the guard replied, and Culebra listened to the rustle of fabric, the muffled clomp of his boots on the carpet, and the soft closing of the door. He sighed, reaching up to touch the heavy black bandages wrapped around his eyes. They worked better than ribbon or scarves or any of the other items that had been used by past Basilisk Princes. Culebra wished it were possible to find something that made him stand out less, but he would gain sight sooner than he would gain acceptance.