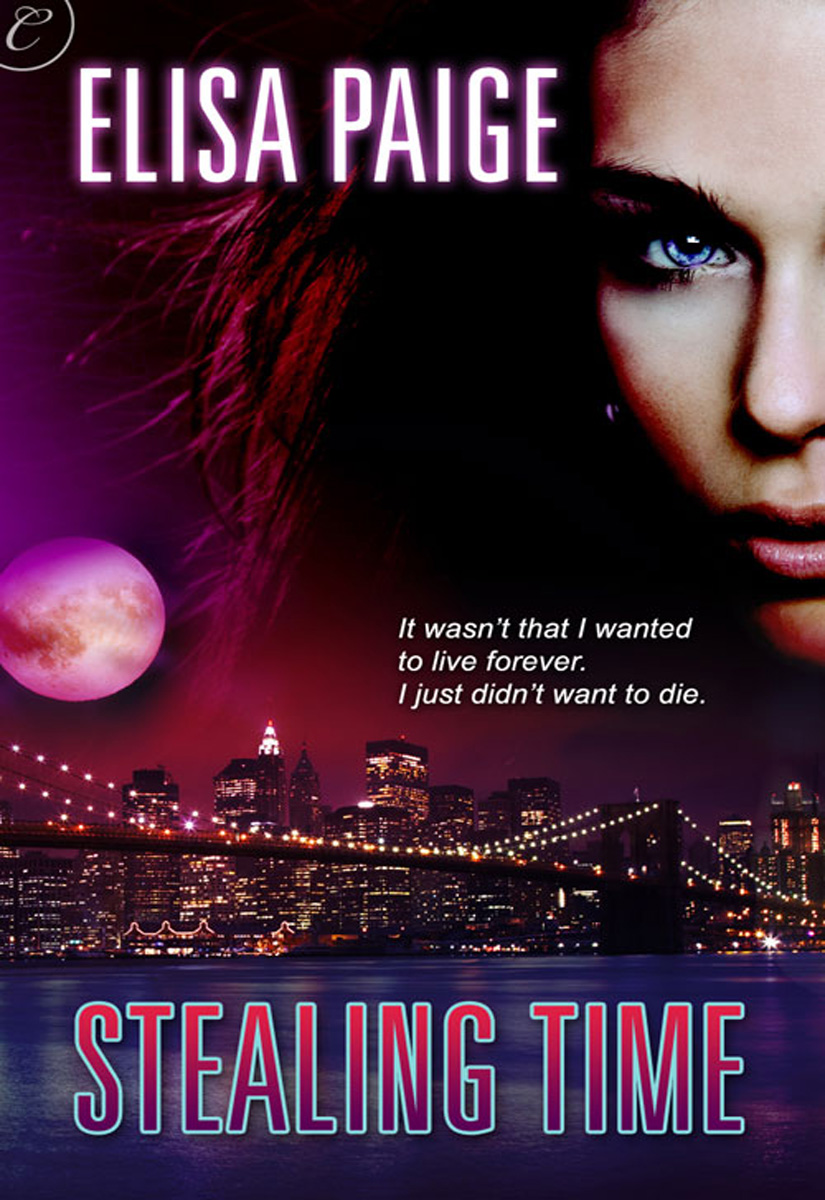 It wasn’t that she wanted to live forever. She just didn’t want to die.

When artist James Wesley realizes Evie Reed is dying, he is so moved by the beautiful reporter’s determination to live that he makes her immortal—a vampire, like him. She’s the woman he’s been waiting over 150 years for. Though initially shocked by the change, Evie quickly embraces her second chance at life, and love.

Just as James and Evie begin to define eternity together, a zealot breaks an ancient treaty, threatening a peace between humans and vampires that has stood for a thousand years. And when he focuses his hatred on Evie, the immortal lovers find themselves swept up in a deadly supernatural war…

A new year always brings with it a sense of expectation and promise (and maybe a vague sense of guilt). Expectation because we don’t know what the year will bring exactly, but promise because we always hope it will be good things. The guilt is due to all of the New Year’s resolutions we make with such good intentions.

This year, Carina Press is making a New Year’s resolution we know we won’t have any reason to feel guilty about: we’re going to bring our readers a year of fantastic editorial and diverse genre content. So far, our plans for 2011 include staff and author appearances at reader-focused conferences such as the RT Booklovers Convention in April, where we’ll be offering up goodies, appearing on panels, giving workshops and hosting a few fun activities for readers. We’re also cooking up several genre-specific release weeks, during which we’ll highlight individual genres. So far we have plans for steampunk week and unusual fantasy week. Readers will have access to free reads, discounts, contests and more as part of our week-long promotions!

But even when we’re not doing special promotions, we’re still offering something special to our readers in the form of the stories authors are delivering to Carina Press that we’re passing on to you. From sweet romance to sexy, and military science fiction to fairy-tale fantasy, from mysteries to romantic suspense, we’re proud to be offering a wide variety of genres and tales of escapism to our customers in this new year. Every week is a new adventure, and we want to bring our readers along on the journey. Be daring, be brave and try something new with Carina Press in 2011!

We love to hear from readers, and you can email us your thoughts, comments and questions to [email protected] You can also interact with Carina Press staff and authors on our blog, Twitter stream and Facebook fan page.

While writing is a solitary occupation, the final book comes into being because of the effort and enthusiasm of many talented, dedicated people.

Thank you, Angela James, Melissa Johnson and the Carina folks for all you’ve done to bring my words to life.

Thank you, family and friends (especially JB and Suzanne) for your unflagging enthusiasm. Some of you know my characters almost as well as I do!

Thank you, Sohail and Abby, for tolerating my periodic spaciness, and for celebrating the victories and sweetening the occasional rough spots.

And many, many thanks to readers for exploring James and Evie’s world!

For Abby, always and forever.

It’s funny looking back, but right up to the moment the doctors diagnosed the sharp pain in my stomach and gave me their shocking news, I’d never thought about my own mortality. Not even once.

I was twenty-six when the doctors told me I was dying. The few months I’d been given raced by as I was examined by every “name” specialist around the U.S., tried every new treatment, grew more and more sick from the so-called medicines. Until I arrived at my last hope—the final doctor, the conclusive appointment.

Light-headed with fatigue—sleep had become impossible and food only worsened the relentless nausea—I sat in Dr. Katzen’s office looking at the pictures of his wife and kids on his desk. He sat facing me, his eyes made tiny by his round, wire-rimmed glasses. While he thumbed through my thick medical records, I met the gaze of a tired, ashen-faced brunette over his right shoulder. Loopy from the pain meds I’d begun to rely on, I watched the woman sway in her chair, as if the simple effort to remain upright was an exhausting trial. Her navy sweater accentuated the bruised circles under her eyes and the bright scarf did nothing to distract from the signs of jaundice.

It was when I lifted a trembling hand to brush the hair back from my face that I realized I was looking in a mirror.

Outrage brought color to my chalky cheeks. What kind of jerk hangs a mirror in his office and angles it so terminally ill patients have to see just how ghastly they look?

“Evie?” Katzen said and I had the impression he’d spoken my name several times.

I dragged my gaze away from the mirror to see him wiping his little glasses with a handkerchief. “Yes?”

He began talking, but the medical jargon washed over me. Maybe it was the exhaustion, maybe it was the morphine, but I couldn’t seem to focus on any one thing for more than a few seconds. How his jaw kept going sideways as he spoke, a clear effort to hide the fact that he was chewing gum. The spots of what looked like spilled coffee on the collar of his starched white lab coat. His kelly-green tie with the golf clubs.

I decided I really hated that tie.

Katzen’s moves seemed choreographed as he put his glasses back on, folded his hands on the desk blotter and leaned toward me. Even his compassionate expression looked practiced.

“I’m sorry, Evie. There’s nothing more to be done,” he said, surreptitiously moving his gum to the other side of his mouth.

Sorry?
Rage swept through me, stealing my breath and pounding in my throat as we sat looking at one another. I quivered with the sudden yearning to punch him, kick him,
anything
to wring some semblance of genuine emotion from him. Rather than this façade that he must have learned in med school—Delivering Bad News 101.

But I only gave him a tight, quick smile that mirrored his own and made my voice professional. “Thank you, Dr. Katzen.”

Pushing myself to my feet, I tried to ignore the too-familiar dizziness and braced against the chair’s hard wood back. Bad enough to feel this way, I hated the appearance of weakness and forced my chin up to meet the doctor’s knowing gaze.

Katzen rose and ran his hands down his grey flannel pants to smooth them.  “You’re welcome, Evie.” Coming around his desk, he made a beeline for the heavy wooden door and opened it, then stood there, waiting for me to leave. “You know about being reimbursed for parking? Oh, wait, with the pain meds, I don’t guess you’re driving anymore.”

I almost laughed, but it would have been hard and bitter. “No. I took a cab.”

He uttered some inanity about the unseasonably warm weather as I concentrated on getting out of his office. At this point in my illness, the weakness was more maddening than the pain, although several doctors had assured me that the pain would only get worse…would, in fact, increase beyond even morphine’s ability to control.

Out in the sterile hallway, I leaned weakly against the wall, closed my eyes and took deep breaths. For one brief minute, I saw myself standing on Gran’s front porch as my mother drove away and two thoughts pounded through my seven-year-old mind: that Pokey-Dot, my only stuffed animal, was smashed in the backdoor of the car, his ratty tail blowing in the wind as the old Buick disappeared around the corner, and the fact that Mama didn’t even ring the doorbell after pushing me and my cardboard suitcase up the steps.

When I opened my eyes, the nurse was marching a defeated-looking woman down the hall. Before they entered Katzen’s office, I saw the desperate look in the patient’s faded green gaze. And I wondered what she saw in mine.

As Gran had taught me, I put my head up, squared my shoulders and got my feet moving.

I caught a cab, intending to go back to my hotel room. I had no plans after that. Having tried everything possible, all that was left to do now was fly home to Dallas and wait to die.

But damnation, I was so freaking tired of feeling helpless. It was an unfamiliar emotion, one I hadn’t known since Mama…

I shut off that train of thought—it was fruitless, nonproductive. My adult life was all about identifying obstacles and finding solutions. If I was going out, I was determined to do it the way I chose to live—on my terms.

Then an illogical compulsion took over—if I just got out of the cab, I could take control and make it all stop. I wouldn’t go back to the hotel. I wouldn’t get on the plane tomorrow.

“Stop!” I shouted at the cab driver, glad of my seatbelt when he slammed on the brakes in surprise. “Let me out here.” I freed myself from the belt and dug a fistful of cash from my purse.

“What the hell, lady!” The cabbie paused to catch the bills I threw into the front seat.

That’s when the world turned upside down. I was thrown face-first into the back of the front seat and rebounded sideways, the cab rotated around me, and everything went dim when my head crashed into the side window.

For a brief span, there was only silence. Then the sound of tearing metal. I was sweating profusely and the pain was excruciating. A figure appeared in the opening where the car door had been. I lost some time and when dim awareness returned, someone was carrying me. Vague glimpses of trees and buildings passed in a blur, too fast to register.

More time disappeared. I lay on something soft. A sofa? Searing pain erased the moment of clarity. A voice filtered through the agony. There was the impression of a figure leaning toward me. Everything went black.

A pale oval hovered above me. My eyes wouldn’t work well enough to determine if the face was familiar or that of a stranger.

I was so cold now. It felt like glass splinters impaled every square inch of my skin and the slightest movement generated agony. My breath bubbled in my throat as I labored to breathe.

“Nnn…” My effort at speech was unintelligible.

The bubbling moved to my chest and deepened, then my heart lost its rhythm.

Terror sharpened my sluggish mind.
Fate was taking me even faster than the disease could kill me.
My thoughts were nowhere near this coherent, but the sense of it and the outrage were fierce.

“
…live…
” My faint whisper was defiant.

There was pressure on my lips. Then…
nothing
.

Lurker by Fry, Gary
Afterimage by Robert Chafe
Vendetta (Legend of the Ir'Indicti #4) by Suttle, Connie
Teamwork Means You Can't Pick the Side That's Right by Scott Adams
Ways to See a Ghost by Diamand, Emily
This Is the Life by Alex Shearer
Stony River by Tricia Dower
Checkered Flag by Chris Fabry
The Indigo Spell by Richelle Mead
Fighting to Survive by Rhiannon Frater