Star Trek: That Which Divides 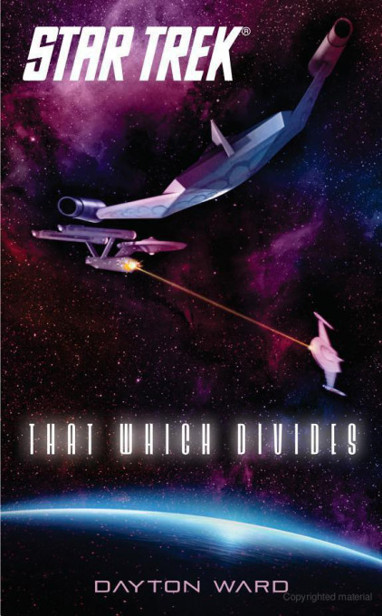 Located in an area of non-aligned space near Federation and Romulan territory, the Kondaii system is home to a unique stellar phenomenon: a spatial rift that opens every three years in proximity to the system’s sole inhabited planet. Only during this brief period is communication possible with the small, mineral-rich planetoid inside the rift. The local population has established a mining colony on this planetoid, and for the limited du ration that the rift is open, a massive interplanetary operation is set into motion: ferrying mineral ore to the home planet while simultaneously transferring personnel and replenishing essential supplies and equipment—everything necessary to sustain the colony before it once again enters forced isolation.

While studying the rift, the science vessel
U.S.S. Huang Zhong
is severely damaged and crash-lands on the planetoid. After the Star-ship
Enterprise
arrives to conduct rescue operations, evidence quickly points to the rift’s artificial nature. It is a feat far beyond the capacity of the local inhabitants, and presents an alluring mystery for Captain James T. Kirk and his crew. It also attracts the attention of the Romulans, who are most interested in studying and perhaps seizing this supposed advanced technology—by any means necessary.

“The helm is slow to respond,” the Vulcan replied. “I am having difficulty arresting our speed.”

On the screen, Gralafi’s surface was now highlighted by a reddish-purple sky occupying the image’s upper third. The ground continued to rush past, and terrain features now were clearly visible, growing larger and more ominous with each passing second. A single thought echoed in Ronald Arens’s mind.

We’re not going to make it.

“Helm control is failing,” T’Vrel reported, and this time even her stoic demeanor seemed to be cracking around the edges. “Captain, I cannot prevent a crash landing.”

Without hesitation, Arens once more hit the intercom switch with his fist. “All hands, this is the captain! Crash protocols! Brace for impact!” Then, looking to Hebert, he said, “Launch the buoy.”

As the first officer moved to comply with the order, Arens could do nothing except watch as the last sliver of sky disappeared from the top of the viewscreen, leaving only the barren, uninviting surface of the planetoid to draw ever closer.

This book is published by Pocket Books, a division of Simon & Schuster, Inc., under exclusive license from CBS Studios Inc.

All rights reserved, including the right to reproduce this book or portions thereof in any form whatsoever. For information, address Pocket Books Subsidiary Rights Department, 1230 Avenue of the Americas, New York, NY 10020.

POCKET and colophon are registered trademarks of Simon & Schuster, Inc.

For Michi, Addison, and Erin, who give me the time and space needed to do this, and who make sure I’m well-fed and loved along the way.

We hope you enjoyed reading this Pocket Books eBook.

Sign up for our newsletter and receive special offers, access to bonus content, and info on the latest new releases and other great eBooks from Pocket Books and Simon & Schuster.

The events in this story take place in late 2269 (ACE), during the fourth year of James Kirk’s five-year mission as captain of the
U.S.S. Enterprise
NCC-1701.

As a former science officer and now the captain of a science vessel, Ronald Arens had encountered his share of interesting stellar phenomena. There had been the odd black hole or quasar, stars in the midst of going nova, and the occasional nebula here and there. He even had spent two weeks studying a rogue pulsar. Nothing Arens had seen with his own eyes or read about in reports submitted by those observing even stranger examples of spatial oddities compared to the image now displayed on the main viewscreen of the
U.S.S. Huang Zhong
’s bridge.

“Okay,” Arens said, rising from his command chair and moving closer to the screen, “I think this qualifies as an impressive welcome to the Kondaii system, especially considering how we nearly blew out our engines trying to get here.” Built for speed, the
Huang Zhong
, an
Archer
-class scout ship configured to hold an enhanced suite of sensor arrays and other science-related information-gathering equipment, had proceeded here at maximum speed after its abrupt reassignment from patrol duty. Despite his comment, the dependable little craft had handled with ease the exertion of traveling at high warp for nearly a week. As for why they had been dispatched, the captain had been told that the ship originally assigned to be here, the
U.S.S. Lexington
, had been deployed elsewhere on a task of greater
priority. Though his ship’s science equipment would do in a pinch, Arens knew it could not substitute for a
Constitution
-class vessel. To that end, the
Enterprise
was being redirected to the Kondaii system to take on the brunt of the survey and research tasks. Until then, it was the
Huang Zhong
’s show.

Fine by me
, Arens mused as he contemplated the anomaly on the viewscreen. To him, it appeared to be something of a cross between a plasma storm and a matter-antimatter explosion. It was an amorphous mass of energy, shifting and undulating in space, all while staying confined within what Arens already had been told was more or less a spherical area less than five hundred kilometers in diameter. Within that region was chaos, in the form of a kaleidoscopic maelstrom of light and color that seemed to fold back on itself, only to surge forth anew moments later. At the center of the field was a dark area, roughly circular in shape, which seemed to beckon to him. It took Arens an extra minute to realize that he had become all but mesmerized by the imagery.

“Captain?” a voice said from behind him, and Arens blinked as he turned to see Lieutenant Samuel Boma, a slightly-built man of African descent wearing a blue uniform tunic and regarding him with an expression that indicated the younger man had been waiting for his commanding officer with both patience and amusement.

Clearing his throat, Arens smiled. “I was daydreaming again, wasn’t I?”

The
Huang Zhong
’s science officer’s features remained fixed as he shook his head in melodramatic fashion. “I’m not qualified to speculate on that topic, sir.
At all
.”

“Damned right, you’re not.” Arens’s smile grew wider.
Their easy banter, something the captain had missed, was a product of his and Boma’s service together years earlier. Arens at the time was the science officer on the
Constellation
, while Boma had been a fresh-faced junior-grade lieutenant fresh out of Starfleet Academy’s advanced astrophysics school. The friendship begun during that joint tour of duty continued even after both men went their separate ways to different assignments. Boma had joined the
Huang Zhong
’s crew less than six months earlier, transferring from a ground posting at Starbase 12 following a less than stellar performance while serving aboard the
Enterprise
. After Boma had run into trouble stemming from insubordination charges that resulted in a permanent notation in his service record, he had requested a transfer to any ship or station. When Arens found out that his friend was available, he had petitioned Starfleet Command to have Boma join his crew. Starfleet granted the request, allowing Arens to make sure that Boma was afforded a chance to redeem himself.