Spellbound: A magical sequel to Bewitched 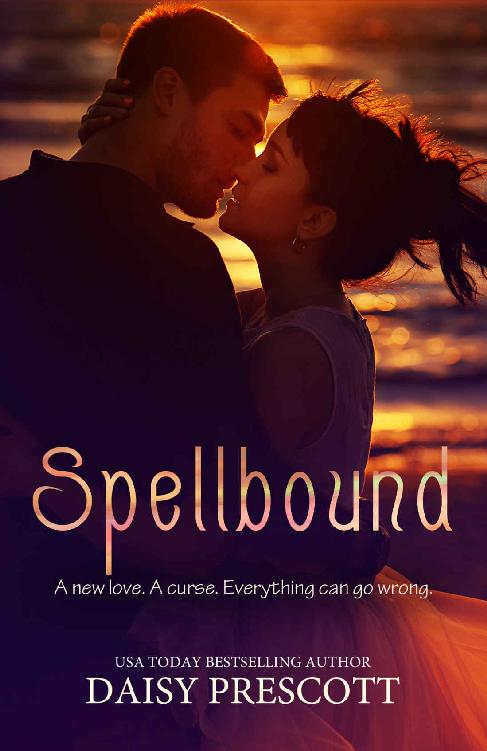 Other books by Daisy Prescott

We Were Here
(prequel to Geoducks)

Geoducks Are for Lovers

Confessions of a Reformed Tom Cat

Take the Cake and Run
(John and Diane)

Take for Granted
(Jo and Ben)

Take it Easy
(Tom and Hailey plus John and Diane)

Give and Take
(a crossover between Modern Love Stories and Wingmen)

A magical novella set in Salem, Massachusetts which continues the Bewitched story

If you don’t carve a pumpkin, it will appear ripe and perfect for months while it slowly rots from the inside out before imploding. The act of transforming a simple, ordinary gourd into something magical accelerates its downfall.

The same could be said for my life.

I hide in plain sight.

With glasses and average brown eyes below the same dark hair sported by the majority of humans on the planet, there’s nothing extraordinary about me.

Except nothing about me is ordinary.

Not with the last name Wildes in Salem, Massachusetts.

My mother believed she could escape my fate by marrying a normal man.

My father thought he could change me by removing me from Salem and my mother’s history.

Both of them are wrong.

My fate has been sealed since the first time I laid eyes on Madison Bradbury.

She thinks she’s average, but she’s extraordinary to me.

A new love. A curse. Everything can go wrong.

No part of this book may be reproduced or transmitted in any form without written permission from the publisher, except by a reviewer who may quote brief passages for review purposes.

This book is a work of fiction. Names, characters, businesses, organizations, places, events, and incidents are the product of the author’s imagination or are used fictitiously. Any resemblance to actual persons, living or dead, is entirely coincidental.

Editing: There for You Editing

For my readers who loved Bewitched and asked for more.

Till she disturbed the sacred spell,

And woke to find her hopes betrayed.

A poet might be inspired to write poems about the magic of last night’s Halloween party. While I may be the black-clothing wearing, brooding type, I’m no poet. I think everyone who knows me is relieved about my lack of poetic interest.

Sure I can quote everyone from Shakespeare to Austen. Any smart man should read Austen to be prepared for dealing with women, especially a woman who loves to read and who also might be an English major.

I’ve had a long time to prepare.

Last night was years in the waiting.

All of my Halloween highlights include Madison Bradbury.

Revealing my true self to her and not having her run screaming from me, or giving me the “you’re crazy” look.

Confessing to her I knew about her love spell and failed attempts at magic.

Making out with Madison on the beach before lighting the midnight bonfire. With my hands.

Yes, men can be witches too. Warlock is an outdated, gendered term only used in old books. Some people are Wiccans these days. I’m all for it, but that’s not me. Horned God and Mother Goddess, pagan loving, namaste earth magic is all good. I’m from the old line, tracing my lineage back five hundred years in New England. The infamous witch trials held in Salem might have been mass hysteria, but amongst the innocent, those Puritan nets caught a few real witches.

The devil didn’t lurk in the woods around their villages; he hid himself in the familiar where no one would dare to question him.

Cloaked in boring normalcy and indignation, he spread rumors and doubt, letting others do evil unto each other.

That’s how dark magic works. It never arrives with fanfare. No, the insidious side of humanity crawls through the cracks and seeps into existence via tiny doubts and insecurity where it replicates, forcing out happy thoughts, good deeds, and kindness, leaving behind only distrust and eventually, hatred.

The same darkness is still in play today.

Devil is the simplest term, but whatever the dark power is called, the results are the same.

In other words, don’t touch the dark stuff.

Instead of sitting around indulging in my mushy, happy feelings over Madison, I’m pushing a broom through Tate’s North Shore beach house, shoving empty Solo cups, candy wrappers, and detritus I’m too disgusted to examine closely. I should be using a shovel while wearing a hazmat suit.

“Do you think a hose would ruin the parquet floors?” I’m half-kidding as I ask Tate.

He’s pulled his blond dreadlocks into a loose ponytail and bagging up the piles of trash while trying not to gag. “The housekeeper will be here tomorrow with an extra crew. We’re only responsible for the trash and body fluids.”

Our shudders mirror each other.

I’ve volunteered to sweep the dining room turned dance floor in hopes of locating Madison’s missing heart charm necklace. Part of a kit sold mostly to gullible girls, Madison had been wearing it last night. I recognized the charm from my mother’s shop instantly. Finding out why my mother sold her an ineffective love spell will require a phone call once we’re done handling the aftermath of another Halloween at the Winthrop mansion.

With the non-business end of my broom, I knock a purple zebra pimp hat off of the eighteenth century bronze chandelier above me. It lands in the pile of soggy hell I’ve created in the middle of the room.

Tate hands me a pair of pink dishwashing gloves trimmed in polka-dot ribbons. “You’re going to want these.”

“Exactly my style.” Thanking him, I wiggle my fingers into the rubber before bagging the garbage.

I’d love to return them to Madison, but I’m not about to sift through the dozens of black garbage bags we’ve filled already.

There’s no magic in the heart other than the sentimental kind that makes couples keep ticket stubs and carnival prizes as mementos. A memory in physical form.

After finishing the pile, I snap off the gloves and toss them into the last black bag.

“You’re not keeping them?” Tate fakes a sad puppy face.

“Not enough bleach in Massachusetts to sanitize them.”

He gags with an open mouth. “Thanks for the cleanup assistance. It always amazes me no one else shows up to help.”

“Maybe they think your household staff handles it for you. Or it all disappears by magic.” I sweep my hands back and forth in front of my face in the weird move magicians use to deflect attention for their slight of hand.

“Why can you start fires but not enchant a broom and dustpan to do the work while we eat breakfast?”

“If only it worked that way.” Staring at the broom leaning against the wall, I count to fifteen. “I’ve got nothing. Sorry.”

“At least you can make objects move.”

I knock the broom over by imagining it on the floor. It bounces once as it hits. In terms of magic, it’s less than spectacular. Or impressive. “You can diffuse and absorb emotions.”

Tate makes slow moving jazz hands. “I’m a human sponge. Not as good as knocking brooms over with my mind, but it’s useful working in the dorms.”

“This conversation is ridiculous. We’re trying to out diminish each other’s talents. Skills most people don’t believe exist, but dream of having. Only thing more stupid than this conversation would be a bunch of superheroes sitting around complaining.”

“True, but you’d totally moan about the tights and capes.”

“Too much Lycra.” I have nothing to hide. I run almost every day. However, no one needs to see a man squished into a unitard.

“I happen to have amazing legs.” Tate spins around once, making me laugh. “Hey, you want to catch the latest Marvel megafilm tonight? Burgers and bros?”

It’s tempting and would’ve been an automatic yes for me before last night. “Sorry. I have plans. Maybe later in the week?”

“Okay.” He studies my face with narrowed eyes. “Does this have anything to do with Madison?”

“We have a date.” I swear my heart beats quicker at the idea.

“Finally.” He doesn’t say anything more. Instead, he grabs two of the trash bags by their knots and lugs them outside.

Tate’s known about Madison for two years. He’s had to suffer the wait as long as I have.

He also knows I’m ignoring all advice to wait until she’s officially twenty-one in three weeks. My mother’s vision has always been specific about Madison’s age when we fall in love.

What difference do a few days make when it comes to true love?

I pace outside of Madison’s dorm like a stalker. I study the ivy crawling up the building and wonder if someone could climb it to reach the windows on the second floor.

For the record, I’ve never stalked her.

If anything, I’ve tried to avoid her for two years, keeping my distance. Admiring her from across the campus, I’ve memorized her laugh and delicate features. It hasn’t been easy to stay away. Torturous.

Okay, that sounds a little creepy. I swear it’s all been innocent.

I pined from a safe distance, learning what I could about her without interfering. I waited and slowly fell in love without her noticing me until this semester. That’s a lie. I fell for her the first time I saw her outside her dorm. Rushing down the steps, she tripped and I reached out to steady her. We never touched.

She didn’t notice me.

The boring guy in glasses who never speaks to anyone? That’s been me.

My father’s words from when I started high school echo in my head.

He believed the Jesuits at the all-boys school in Boston he sent me to could balance out whatever magic mumbo-jumbo my mother poisoned my mind with as a child.

Sadly, he could never accept my magical abilities were inherited like eye color or earlobe shape.