Read Spell of the Island Online

Spell of the Island 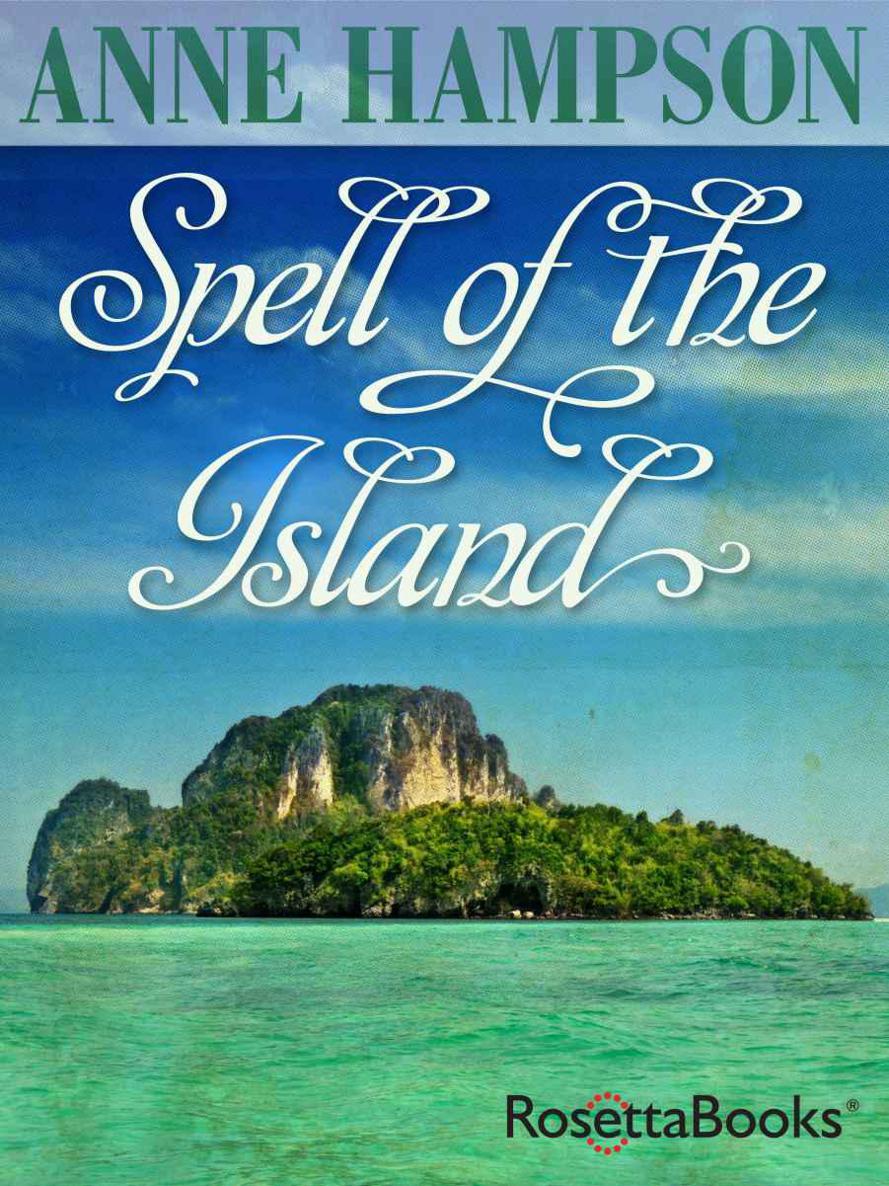 SPELL OF THE
ISLAND

currently makes her home in England, but this top romance author has traveled and lived all over the world. This variety of experience is reflected in her books, which present the ever-changing face of romance as it is found wherever people fall in love.

Mrs. Morris was crying when Emma phoned her.

‘It’s Louise. She’s become so unhappy—please ring later,’ begged the woman, and to Emma’s surprise she put down the phone.

Standing, staring at the receiver in her hand, Emma realised that her heart was beating far too quickly. And without further ado, she determined to find out what was wrong with the woman who, twenty-two years ago, had fostered her out at the age of two, and along with her husband, now dead,
had nurtured Emma with all the loving care of real parents.

Louise . . . Emma’s thoughts were naturally on the girl who had been born to Emma’s foster parents only a year after they had taken Emma, after having been assured by the doctor that they could never have a child of their own. Both girls had received love, and both had given love in return, so that the three women were still very close, with Emma visiting her ‘mother’ as she had always called her, at least once a fortnight. Emma worked in London; her mother lived in Cheshire so it was a drive of two hundred fifty miles each way when she went to visit Mrs. Morris. But Emma tried not to miss a visit, not after Louise had taken the post of nanny on the island of Mauritius in the Indian Ocean. She had been away from home now for over a year, but two months ago her employers had moved to Sri Lanka where Mr. Winnick was to work for three years; and they had left Louise with the little boy, but moved her from their house to that of Mrs. Winnick’s brother—‘an arrogant blanc Mauritian who considers me a fool as regards intelligence and an especially inefficient nanny.’ This from Louise about a month ago, and there was more which Emma read between the lines and hoped her mother did not also perceive—that Louise was far from happy now that she was under the watchful eye of a man she obviously detested.

All the same, it had not struck Emma that the situation would worsen; on the contrary, she had assumed that this man would soon lose interest and go about his business, allowing Louise to go about hers.

Now, it seemed trouble loomed, and Mrs. Morris was plainly taking things very much to heart.

It was fortunate that Emma was on a week’s vacation, having taken it in order to decorate her tiny flat. She was papering her bedroom but left it after the phone call, and within a couple of hours she was on her way, speeding along the Motorway, eye on the mirror as she was, in her anxiety, exceeding the seventy-mile-an-hour limit.

Mrs. Morris gaped on opening the door of her Council house and seeing Emma standing there, suitcase in hand.

‘Don’t look so surprised, darling,’ broke in Emma with a smile. ‘Surely you knew I’d come?’

‘But aren’t you working?’ Mrs. Morris opened the door wider for Emma to enter the narrow hallway. Emma put down her case at the bottom of the stairs.

She explained how she came to be off work; then she and her mother were in the living-room, and Emma was listening intently to Mrs. Morris, who although she several times said that Emma would understand it all once she had read Louise’s last letter, for the present made no attempt to go upstairs to get it. Plainly she was upset, her eyes still swollen from tears much more recent than those she had been shedding when she was answering Emma’s call.

‘She says she can’t stand it any longer—he’s a dreadful man by all accounts! But the trouble is she can’t come home because of the little boy—’

‘She can ask this man to get someone else,’ interrupted Emma, angry that her mother should be upset like this by a man she had not even met.

‘She has, and he refuses, telling her arrogantly
that she signed for two years and she must stay at least that long.’ Mrs. Morris went towards the kitchen door. ‘I’ll make some coffee and then fetch Louise’s letter for you to read.’

‘Can’t I make the coffee?’ Emma went past her and filled the kettle, looking round at what was so familiar. Poor but happy, the Morris family had been, and the death of Mr. Morris had been the first blow, reducing the family to three. Then Emma had been faced with moving to London with her firm or losing her job as secretary to the managing director. As Louise was at home at that time Emma, rather reluctantly, decided to live in London. Then Louise had gone. . . .

‘Here’s the letter.’ Mrs. Morris had gone for it while Emma was making the coffee. And now they were both sitting by the fire drinking it, while Emma read and re-read the letter, aware of something she could not fathom, but
sure
her sister’s mind had been dwelling on some additional aspect all the time she was writing the letter.

‘What do you make of it?’ asked Emma at last as she folded the three sheets of paper and put them back in the envelope. She was watching her mother closely and soon realised that the underlying element in the letter had completely escaped her notice. The printed word only had caused the tears and anxiety, but for Emma, well, there was an
uncomfortable conviction that there was a great deal more than Louise had revealed.

‘I can only think one thing: that this hateful creature is out to harass Louise at every turn; he dislikes her intensely and makes her life a sheer misery because of it.’

Emma said puzzledly, ‘But why should he harass her when he knows she has a job to do? He must know she can’t do it properly if he’s complaining all the time.’

‘Well, she says he’s complaining all the time—you’ve just read it for yourself. And she says he treats her with contempt and sometimes seems to be sneering at her, or secretly laughing at her.’ A pause and a frown and then, ‘Why should he laugh at her, I wonder?’

‘That,’ commented Emma as she reached for her cup, ‘is one thing that baffles me.’

‘It can’t be pleasant to be laughed at any more than it is to be admonished for not doing your job properly.’

‘Louise hadn’t been a nanny before she went out there,’ mused Emma, her brow creased in thought as she recalled her asking Louise if she really thought she could do a job like that. Louise had never taken to children in the way Emma had, although she was always charming to them. It was just that she had never had the inclination to play with them as Emma had, when, for instance, one of Mrs. Morris’s friends had called, bringing her grandchildren with her.

‘She’s been quite satisfactory up till the time Mr. and Mrs. Winnick went away to Sri Lanka. It’s only since she went to this abominable man’s home that she’s been so unhappy.’ Tears stood out on Mrs.
Morris’s iashes, and Emma bit her lip. What was to be done? she wondered, wishing the island was not so far away.

‘Louise doesn’t say specifically what the man’s complaints are,’ she commented, recalling one particular passage in the letter.

‘I’m desperately unhappy, and cry at night when I’m in bed. I never thought when I took the post, that it would bring such heartbreak. . . .’

No wrapping it up this time. Louise was obviously distraught; for otherwise she would surely have spared her mother, knowing as she did just how easily she could be upset.

‘I believe he just wants to make my poor child’s life a misery—’ Mrs. Morris found a handkerchief to dry her eyes.

‘That’s a puzzle in itself.’

Slowly Emma took the letter out again. Just
what
was it that lay hidden within the dejection that ran the whole way through the pages?

‘Do you know,’ she murmured almost to herself, ‘I’m not at all convinced that Louise
wants
to leave.’

Before her mother could comment, there was a knock on the front door, and Emma rose from her chair. It was the postman, who always gave a little rap on the panel after dropping letters through the box.

Another from Louise. . . . A sigh escaped Emma, wondering why her sister had not written to her
instead of her mother. But in all the time Louise had been away she had written only four letters to Emma. Emma had put it down to her being too busy, but she herself wrote regularly once a month whether she received a reply or not.

Emma did as she was requested, hoping against hope that something more cheerful would be enclosed in the thin airmail envelope. But she was disappointed. In fact, Louise seemed more distraught than before . . . and still Emma somehow gained the impression that the girl did not want to leave Mauritius and come home.

Reluctantly she began to read aloud, glancing now and then at her mother and swallowing a lump in her throat when even yet again tears appeared.

‘She’s frightened of him, it’s plain,’ cried Mrs. Morris. ‘He’s probably threatened to prosecute her if she breaks the contract!’

‘I can’t see him doing a thing like that.’

Her mother looked at her.

‘You seem convinced that she doesn’t really want to leave. But you have nothing to go on, have you?’

‘Nothing concrete, no,’ admitted Emma, but again she was telling herself that if Louise really wanted to leave she could do so.

‘Would you leave a little boy, if you’d promised his parents you’d take good care of him while they were away?’

‘She’d be leaving him with his uncle—’

‘That’s not an answer to my question, Emma. Would you shirk—do the dirty on your employers?’

Emma gave a sigh. For herself, she wouldn’t let her employers down, but neither would she suffer as Louise was suffering. She would certainly make a concerted effort to hold her own against the wretched man.

‘So you can understand Louise’s position. She has to put up with this for at least another year.’ The sob in Mrs. Morris’s voice was plain to Emma, who was suddenly angry with Louise despite what the girl was going through. Why, she asked again, hadn’t Louise written to
her
instead?

‘What’s to be the end of it?’ quivered Mrs. Morris. ‘She’ll be a nervous wreck long before she’s free to leave.’

‘I’ll write to her if you like,’ suggested Emma.

‘And what good will that do?’ was the swift rejoinder, and a lengthy silence ensued.

Emma drank her coffee, watching her mother’s changing expression. It seemed an idea had come to her, decided Emma, but was certainly not prepared to hear her say, ‘Can you go over there, Emma, and investigate? You’ve almost all your holidays still to come. . . .’ Her voice trailed as Emma’s expression changed. ‘If it’s the cost you’re thinking about,’ she continued before Emma could speak, ‘then forget it. I have savings and I’m willing to spend some of them on the fare.’

‘Mother, it’s not practical to spend your money in this way,’ she began, then stopped. She herself had ample money saved for the fare. . . .

‘It’s the only sensible thing to do, to ease my mind,’ insisted her mother firmly. ‘I can’t go on like this, Emma. You know how easily I give way to nerves. Please, dear, do this for me,’ she ended quiveringly.