Sons of Mayhem 2: Blood and Whisky 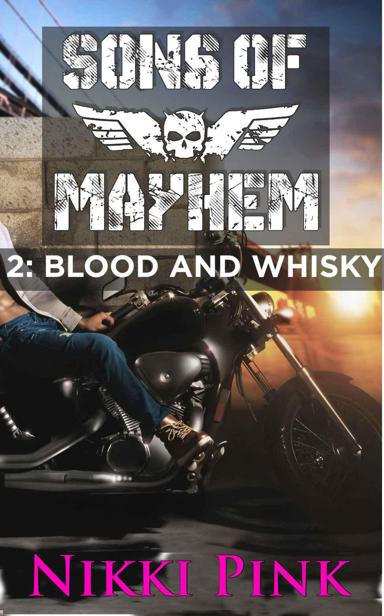 Sons of Mayhem 2: Blood and Whisky

This is a work of fiction. Similarities to real people, places, or events are entirely coincidental.

SONS OF MAYHEM 2: BLOOD AND WHISKY

This is the second book in the Sons of Mayhem series. If you haven’t read the first one yet I suggest you do so first. You can find the first book by clicking
here
.
Or searching your favorite online bookstore for “Sons of Mayhem”.

I also like to give my regular readers a great deal: I launch ALL my new titles at a reduced price for just 48 hours. I email all my regular readers so that they can make the most of this deal. (If you wait for Amazon to email you it may be too late!) If you’d like to join my email list to hear about new book launches please go to:
http://bit.ly/1fZ3Y11
and drop your email address
in the box. NO SPAM GUARANTEE. I only send emails about new releases.

He rested on the desk, the barrel of the gun pointing down through the sliding window to the door of the warehouse below. It was the only way in or out. If whoever it was outside was coming in, that'd be their means of entry.

Jase swallowed nervously, and then gave a half-smile as he once again tasted the girl, Nicole.
Goddamn she tastes sweet. Why'd we have to get interrupted? She's gonna be so pissed off at all this.

Jase's mind begin to wander. What would he do to her, with her, when he finally got some real alone time? Just as his imagination was beginning to get away from him he was brought back to the moment in a rush.

The door creaked as someone grabbed its handle, and then roared as it was dragged open. "Oh shit," he said to himself, his voice soft so as not to draw attention.

Jase clutched the shotgun tight, his right eye staring down the barrel at the door below, hardly believing w
hat he was seeing.

Two skinny men holding handguns pointed out in front of them stood framed in the doorway by the sunlight streaking in from behind them. An easy target if he didn't mess up.
Who are these jokers? Haven't they ever stormed a building before?

Jase's finger rested on the trigger. Things would get very difficult, and possibly messy if this didn't go according to plan. But for once, things went right.

Before the men could get too far in to the warehouse the tatted biker squeezed his trigger finger. The firearm roared and one man dropped to the ground, sending his gun clattering.

The other man let out a yelp followed by, "Shit!". His mouth opened and his
eyes widened, looking around frantically for the source of the gunshot as Jase pumped another shell into the gun.
Bang.
He didn't stand a chance.

Didn't put up much of a fight, did they?
"Got 'em!" Jase laughed and got up from his prone position across the desk.
God I hope she isn't too pissed off. We better get down there fast though.

I heard the faint sound of the warehouse entrance sliding open and fear ran down my spine.

There was a pause, and then the first shot rang out.

I lay under the bed quaking.
What on earth have I gotten myself into? I thought I'd be drinking and partying not getting shot at. I should have stayed in the dorm. Damn Lucy for letting me come with her!

My eyes were closed as I heard another shot ring out. It wasn't how I'd imagined a gun battle; not at all like how guns sound on TV or in the movies. But what did I know?

Jase let out a laugh. "Got 'em".
Who is this guy? He's laughing?
I was shaking under the bed. "Come on Nicole, let's have a look at these punks."

I let out a whimper. "No, please. I hate blood." Little did I know that I'd be seeing a lot of it over the coming days and weeks.

Jase let out another little laugh. "Don't worry. There's no blood. Yet."

No blood?
"Did they run away?"

Jase knelt down on the floor and extended a tattooed and muscled arm under the bed. I grabbed his forearm, solid like an iron bar. Strong. He pulled me out with a firm but controlled
tug. As I rose to my feet I brushed off the dust that clung to my skin. I was annoyed to see some of it had mixed with sweat leaving me with gray marks around my thighs and on my stomach.

Jase nodded towards the stairs. "Come on. Before they get up." I ri
sked a look through the windows to see what had happened down below. There were two skinny guys lying on the floor clutching their stomachs. I gulped.

Jase walked ahead of me as we went down the stairs, one arm clutching the gun and the other holding his j
acket. I leaned on his shoulder for support.

We walked over in the direction of the door and stood over the men, the late afternoon sunlight streaming over our boots. He was right. There was no blood. I didn't understand what was going on.

Jase poked the jaw of the nearest guy with his workboot, shoving his head backward. The guy was wide eyed and looked terrified.

"Alright shithead. I want some answers. I may only be shooting rubber bullets, but trust me, at this range they'd be very, very bad for you." T
he man on the floor seemed to be struggling to breathe.

Jase turned to look at me. "Yeah. Riot rounds. No blood. But they're winded, and they're gonna have some nasty bruises." Jase bent over and picked up two silver colored handguns that were lying on the floor. He tucked each of them into the back of his jeans, turning slightly as he did so.

There was something about that; a sexy tatted guy in a white tee shoving twin handguns into the back of his pants, just above his deliciously firm a
nd rounded ass, that did something to me. Well, what girl wouldn't get at least a littler flustered?

Jase slipped his jacket back on as he looked at the miserable looking men in contempt. Knowing that they weren't dead, or even bleeding, had been such a re
lief. With Jase by my side as we towered over the rats before us I felt a grin begin to cross my face.
What the hell is wrong with me? Why am I smiling?

Poking the toe of his boot at the closest body Jase spoke again. "Alright asshole. Who the fuck are you
and why the fuck were you shooting at us?"

The man let out a groan. Jase placed his boot on the stick-thin wrist of the man. He yelped. "Sorry! I'm sorry!"

I saw Jase push his boot down harder on the guy's wrist. My grin turned to a grimace, but I also felt pleased.
That's what you get for shooting at us, asshole.
Jase's voice was deep and gravelly as he spoke again, "Of course you're sorry. But that's not what I need to hear right now. Who the fuck are you and who the fuck sent you?"

The man struggled to
breath in before speaking, "Bobby."

"Why the fuck were you shooting at us? Have I done anything to you?"

I had my hands on my hips as I looked down on the men below.
I want to spit on them. Scum. Should I spit on them? What the hell am I thinking.
I'd never been in a situation to watch a man in such a position of power before.

"Sorry!" he spluttered.
Idiot, he told you no to say that.
He let out a scream as Jase momentarily pressed his boot back against the man's wrist. As the pressure was released Jase raised his eyebrows at the man again. "The Mexicans! The Mexicans sent us!"

Jase sighed. "For Christ's sakes," he said to himself before turning to speak to the man on the ground again, "Which fucking Mexicans? Got a name?"

The man winced when he didn't reply immediately and Jase applied more pressure to his wrist. Then the words gushed out again. "Big! Tattoos!"

I watched as Jase rolled his eyes and shook his head. "And how much did they pay you?"

The man reached into his pocket, causing Jase to level the shotgun at his face. The man pulled out a baggie stuffed with crystals.

"He paid you in meth? For fucks sake. Is that all I'm worth to you?"

"Did he say why he wanted you to kill
a Son?" From the way Jase asked the question it was obvious he didn't expect a useful answer from the druggies on the floor below us.

The meth-head on the floor looked confused for a moment before he said, "He didn't say Sons, he said you! The blond guy on
the bike. He told us to shoot the blond guy."

I let out a small gasp.
They were after Jase?
He looked confused. "Me? Why me?"

"I don't fuckin' know man I swear!" Tears were rolling down from the corners of his eyes.
Won't fuck with us again will you, buddy?
I felt a thrill running through me. The power we had over the guys on the floor was intense.

"How'd you find us here? We smoked you miles back."

The other man reached into his pocket, causing Jase to wave the gun into his face, his boot still pressing down on the wrist of the talker. He pulled out a cell phone. "He called us. The Mexican called us and told us how to get here."

Jase reached down and snatched the cell phone out of the proffered hand. He glanced at the screen and then threw it hard on to t
he bare concrete. The phone skittered across the floor in a flurry of broken plastic. "Number's blocked."

As Jase stood over them I could see the anger and confusion on his face.
Who was after him? Why?
I realized something strange. Despite only having known him a couple of hours I didn't want him to feel like that, I didn't want him angry and perplexed.
If only I could help.

We stood silently over the men on the floor while Jase thought. I looked down my bare thigh to the top of my knee-high boots.
I wonder what it'd be like to step on them.
I imagined stamping the sharp heel in to one of them, maybe a bruised stomach or their balls.
That'd teach you to fuck with Jase.

I shook my head to clear it.
What's gotten in to me?
I wrapped an arm around Jase's waist and gave him a squeeze. He slipped his big arm around me and I let out a satisfied smile as his hand rested against my upper thigh and the curve at the bottom of my ass.

It was only a moment, but standing over the druggie scum with his arm around me I fe
lt like a queen. His queen.

The moment was ruined when we heard yet more engines approaching.
Uh-oh. What now?