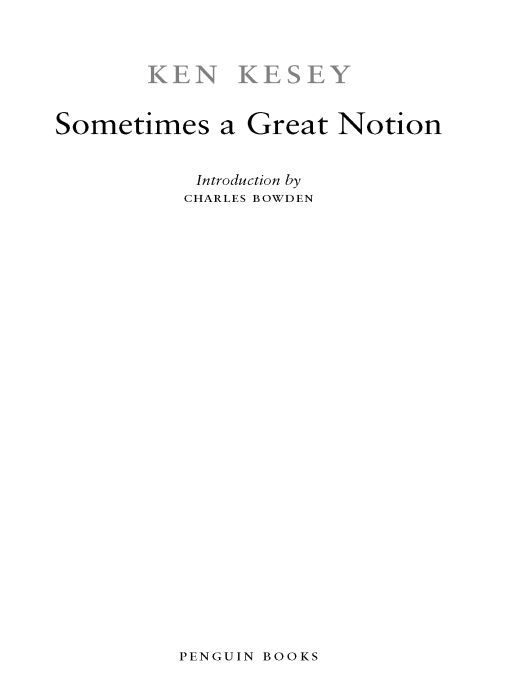 Table of Contents
Title Page
Copyright Page
Dedication
Introduction
From the original reviews of
Sometimes a Great Notion
“As in
Cuckoo’s Nest
, Kesey brings to life people you will never forget . . . Getting into this book is getting into a fascinating, crazy world of a fascinating, crazy family which has a throbbing reality and a desperate dedication to living . . . and then there is that great gift for comedy, for purely sensational writing. When Kesey describes the Canada honkers flying over the woods you can almost see them; when he describes the smells of the grass and the tastes of the strawberries you feel and you smell and you taste.”—Ralph J. Gleason,
San Francisco Chronicle
“Sometimes a Great Notion
, a big book in every way, captures the tenor of post-Korea America as nothing I can remember reading . . . Beyond the PTA and the beer commercials, beyond the huge effluvium of the times, exist people who live by the ancient passions, and Mr. Kesey in the fullness of his material discovers them for us.”
—Conrad Knickerbocker,
The New York Times Book Review
“A tremendous achievement . . . Set against the damp and brutal background of an Oregon logging community, the book by turns gasps, pants, whoops, and shrieks . . . you cannot help but admire Kesey’s vigor, his profligate command of the language. And you have to stand back in awe of the man’s ability to create character.”
—Don Robertson,
The Cleveland Plain Dealer
“In his first novel Kesey demonstrated that he was a forceful, inventive, and ambitious writer. All of these qualities are exhibited, in even higher degree, in
Sometimes a Great Notion
. . . Here he has told a fascinating story in a fascinating way . . . Many novelists have experimented with the rapid shifting point of view, and some have tried to blend past and present, but I can think of no one who has made such continuous use of these two methods as Kesey. And he has made them serve his purpose: that is, he has succeeded in suggesting the complexity of life and the absence of any absolute truth.”—Granville Hicks,
Saturday Review
“Full of vitality and color . . . There is no doubt that Kesey is a bold writer working out his own mode of expression . . . Anyone interested in the trends of the American novel should want to read it.”
—Edmund Fuller,
Chicago Tribune
“The reader should put on a muffler and a slicker before he reads: it’s that wet and cold up in Oregon and Kesey is that realistic . . . He is both poet and peasant, as rich and voracious as the river and woods.”
—Irving Scott,
Los Angeles Times

SOMETIMES A GREAT NOTION
KEN KESEY was born in 1935 and grew up in Oregon. He graduated from the University of Oregon and later studied at Stanford with Wallace Stegner, Malcolm Cowley, Richard Scowcroft, and Frank O’Connor.
One Flew Over the Cuckoo’s Nest
, his first novel, was published in 1962. His second novel,
Sometimes a Great Notion
, followed in 1964. His other books include
Kesey’s Garage Sale
,
Demon Box
,
Caverns
(with O. U. Levon),
The Further Inquiry
,
Sailor Song
, and
Last Go Round
(with Ken Babbs). His two children’s books are
Little Tricker the Squirrel Meets Big Double the Bear
and
The Sea Lion
. Ken Kesey passed away on November 10, 2001.
CHARLES BOWDEN lives near the Mexican border. His most recent books are
Inferno
and
A Shadow in the City: Confessions of an Undercover Drug Warrior
. He was born into a country that had a great notion, and he misses it. 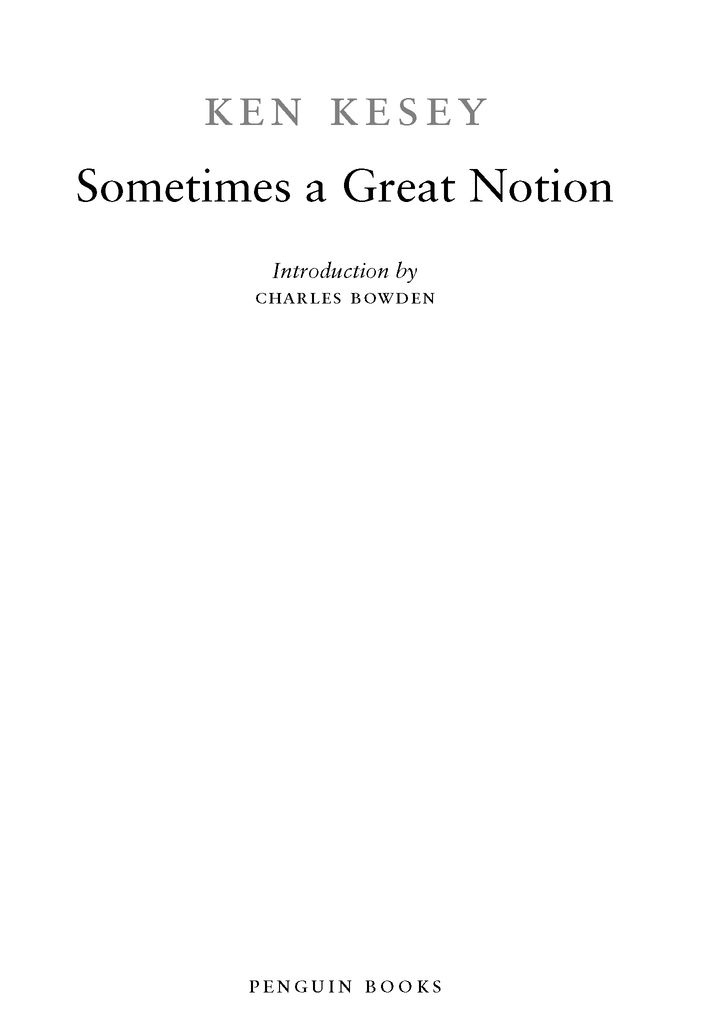 To my mother and father—
Who told me songs were for the birds,
Then taught me all the tunes I know
And a good deal of the words.
Sometimes I live in the country,
Sometimes I live in the town;
Sometimes I get a great notion
To jump into the river . . . an’ drown.
—
From the song “Good Night, Irene,”
by Huddie Ledbetter and John Lomax
Introduction
I was trapped in the heart of a cold and gray Wisconsin winter when a campus radical loaned me what he described as “this great union novel by Ken Kesey.” The name rang a few bells—he was the guy who wrote
One Flew Over the Cuckoo’s Nest
, dosed himself with LSD, went on the lam to Mexico after a drug bust, and hosted the fabled Acid Tests with the Hell’s Angels. I went home, sat in a corner chair, and read the first line, “Along the western slopes of the Oregon Coastal Range . . . come look: the hysterical crashing of tributaries as they emerge into the Wakonda Auga River . . .”
That opening hit my head in the growing darkness around six p.m. When the sun came up the next morning, I was still in the chair and stayed there until sometime later that day when I finished the book. In between there was a lot of music, some cheap wine, then black coffee. After I devoured the final pages, a kind of silence descended because my friend was dead wrong—it wasn’t a union novel. When I heard what other folks said about it—often bad—I just shook my head and stayed mute. The book was greeted with reviews that ranged from contempt to damn near hatred.
Sometimes a Great Notion
is one of the few essential books written by an American in the last half century. The plot is simple: a difficult family refuses to abide by a union strike against a lumber company and keeps cutting down trees. What happens after that decision tells us a lot about ourselves and our country and Ken Kesey’s lust for freedom. The tale unfolds through the minds of successive characters. Some people find this confusing, though I’m not sure why since it is the basic reality of every whiskey bar, coffeehouse, and family. Life is a bunch of people seeing and talking and thinking, or life is nothing at all. In
Sometimes a Great Notion
(and what better description is there of the promise of American life than this title?) everything is damp, lush, and threatened. The ground is ancient, the people midgets compared to the natural forces swirling around them, and victory does not mean peace and contentment but resistance. Kesey was the hero of a tie-dye generation, and yet he put out a huge novel that was flannel shirts, sweat, brutal labor in the woods, and almost prehistoric in its angers and loves and beliefs.
The book demolishes all the ways we have of defining life so it will become tame. Collectivism comes across as living death, individualism as actual death, resources as something disappearing as the family gnaws through a last virgin stand. The human-centered world vanishes at times, as the book suddenly inhabits the mind of a dog pursuing a bear or the sensations of a fish leaping in the river in a desperate effort to flee the growth on its gills. And the entire book is literally in the hands of a woman as she flips through a family album in an effort to explain the love and defeat she has witnessed and shared.
After delivering this monster statement, Kesey stopped writing novels for more than twenty years. Decades later, he offered this bit of advice to writers:
One of these days you’re going to have a visitation. You’re going to be walking down the street and across the street you’re going to see God standing over there on the corner motioning to you saying, “Come here, come to me.” And you will know it’s God, there will be no doubt in your mind—he has slitty little eyes like Buddha, and he’s got a long nice beard and blood on his hands. He’s got a big Charlton Heston jaw like Moses, he’s stacked like Venus, and he has a great jeweled scimitar like Mohammed. And God will tell you to come to him and sing his praises. And he will promise that if you do, all the muses that ever visited Shakespeare will fly in your ear and out of your mouth like golden pennies. It’s the job of the writer in America to say, “Fuck you, God, fuck you and the Old Testament you rode in on, fuck you.” The job of the writer is to kiss no ass, no matter how big and holy and white and tempting and powerful. Anytime anybody says come to me and says, “Write my advertisement, be my ad manager,” tell him, “Fuck you.” The job is always to be exposing God as the crook, as the sleaze ball.

Secrets and Lies 5 (The Ferro Family) by H.M. Ward
Airmail by Robert Bly
The Catalyst of Corruption (The Final Formula Series, Book 4) by Becca Andre
Expecting the Prince's Baby (Harlequin Romance\Princes of Europe) by Rebecca Winters
Girl Seduced (The Girl Interrupted Trilogy Book #1) by Steel, Danika
The Warlock's Companion by Christopher Stasheff
Final Crossing: A Novel of Suspense by Carter Wilson
The Horrific Sufferings Of The Mind-Reading Monster Hercules Barefoot: His Wonderful Love and his Terrible Hatred by Carl-Johan Vallgren
Who Is Mark Twain? by Twain, Mark
Mission Mars by Janet L. Cannon