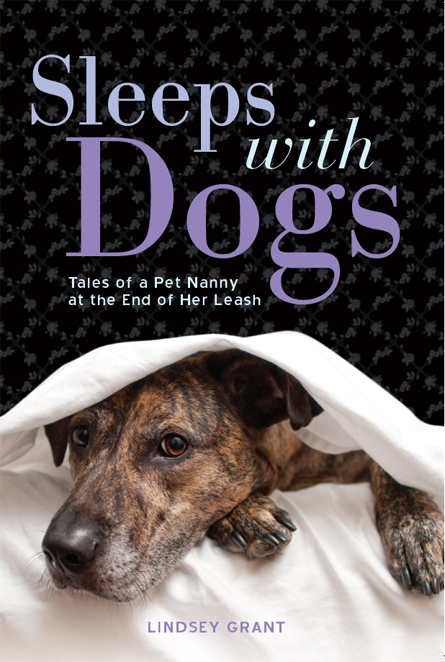 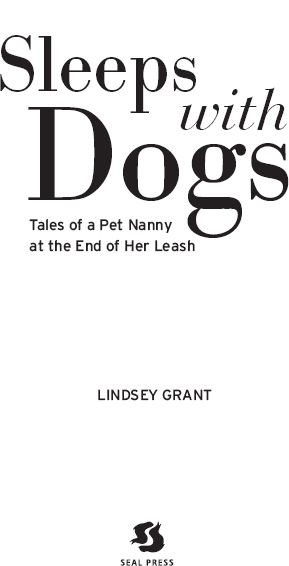 Author's Note: I have tried to re-create the events, locales, and conversations included in this book from my memories of them. In order to maintain their anonymity, I have changed the names of individuals and the animals described here, as well as some identifying characteristics and details such as geographic descriptions, physical properties, occupations, and places of residence.

All rights reserved. No part of this book may be reproduced or transmitted in any form without written permission from the publisher, except by reviewers who may quote brief excerpts in connection with a review.

Sleeps with dogs : tales of a pet nanny at the end of her leash / Lindsey Grant.

For my parents, who encouraged every beginning, and for P, who made “The End” possible

Chapter One: Will Work for Pets

I am pleased to introduce myself as a new name in local animal care. While I am only recently a resident of California, I'm an old hand when it comes to working with (and doting upon) animals.

It's my pleasure to offer my services to you and your petâcanine, feline, reptilian, avian, or otherwiseâwith the guarantee that, while I am with your companion, my top priorities are always safety, consistent quality of care, and lots and lots of affection!

I look forward to meeting you and your (furry, scaly, or feathered) friend!

Will Work for Pets

I
was the go-to kid on the block to call when the neighbors were going out of town and needed their newspapers brought up, their mail retrieved, the plants watered, and their dogs walked or their cats fed while they were away. Before I was old enough to babysit, and even after, I regularly watched after the pets living in my family's intown Atlanta neighborhood.

For years, I pet-sat for a Lab and an aging cocker spaniel down the street, never quite getting used to the idea that I'd earned the crisp $50 bill the neighbors always paid me with when they returned. I'd have played with those dogs, pet them, fed them, and refreshed their water bowls, for free.

As the spaniel got older and older, she got more and more ornery, once biting me on the face when I leaned in too close to greet her. I was devastated, certain that I'd done something really wrong to prompt her to bite me like that. In my third-grade class, we'd had
a hamster that bit me, and I never forgot the teacher's explanation that animals bite because they are afraid and are trying to protect themselves. I'd cried about that hamster bite, not because it hurt, but because I felt so bad for scaring the hamster.

After the spaniel attack, I left a note for her owners explaining what happened and suggesting that they shouldn't pay me because I had scared her and I was sorry. They of course paid me anyway; I heard them at the door talking to my parents and apologizing profusely for what had happened. The dog was getting old and senile, they'd said, and they'd been worried for a while about their own young kids playing with her for this reason.

I also took care of two big beautiful golden retrievers who, unlike our dog, Biscuit, lived inside the house and ate wet Alpo, which smelled much worse than Biscuit's dry pellets. And once, I took care of our family friends' budgies when they went on vacation. I couldn't understand the appeal of those loud, demanding birdsâalso bitersâbut I was happy to be asked.

Even when I started taking on babysitting gigs, I so much preferred the demands of the dogs and birds over the kids I cared for. Animals didn't complain about the way you prepared their SpaghettiOs, balk about bed or bath times, or question the necessity of tooth brushing. They didn't challenge your authority by throwing things at your head or tell you they hated you and wanted their mommy. Increasingly, I declined requests to babysit or nanny and just stuck with the animals.

While I grew up with traditional petsâseven or so hamsters, our beloved Biscuit, and Seal the catâI had a snake in college. Monty was a ball python, about two feet long, and a wonderful companion. As pets go, snakes aren't the most expressive or the cuddliest. But to me, he was both. He never bit me and was content to hang out on the couch, wrapped around my arm or coiled under
a throw pillow, while I studied or watched TV. He was exceedingly polite to guests and even acted like a gentleman in the company of the live rats I fed him. If he was hungry, he dispatched them quickly and cleanly. A hero's death. If not, he endured the rat's fearful bites nobly, never retaliating when his rat snack sunk its teeth into his perfect scaly length.

Perversely, I grew attached to the rats, tooâthe uneaten ones. When Monty declined his dinner, I'd keep the rat in a shoe box with a cardboard tube and an ear of corn or some cereal until my next shift at the strip mall pet store, where I'd worked since sophomore year. There, the rejected rat, spared its inevitable fate for one day more, would go back in the tank with his rodent brethren.

After college, my move from Georgia to California necessitated that I find Monty a new home. Taking him with me on the cross-country journey hadn't even occurred to me. This was 2004, and
Snakes on a Plane
hadn't yet been released. I didn't investigate at the time, certain that there weren't allowances for reptilian carry-ons. Nevertheless, as soon as I relinquished Monty to my manager at the pet store, along with his hand-painted cage of wood and chicken wire, heat lamp, water bowl, and bark arch for hiding beneath, I sorely wished I'd reconsidered.

Snakes don't exactly give you that heart-squeezing look that you might get from a beloved dog, or cat, or rabbit. He flicked his tongue, testing the stale air in the back of the store, no doubt sensing the proximity of many other snakes and dozens of tasty rodent treats. Surely, his tiny snake heart was not hurting like mine did during this final farewell. My former boss was more than happy to take my handsome two-foot-long friend off my hands, certain that she could sell him for a nice sum.

Once I'd surrendered my snake, I packed up the rest of my belongings for shipping West. Beyond the bedding and clothes, my
boxes were filled with largely impractical and sentimental creature comfortsâbooks, my parents' decades-old vinyl collection and turntable, framed photos. I was proud that I'd condensed twenty years of living in the Atlanta area into roughly six boxes of varying sizes, until I saw the amount I owed for shipping. Perhaps I could have reconsidered some of the books and all of the records.

My plan was to establish California residency in order to attend grad school. Creative writing seemed a likely fit for my interests and skills; far better than a master's in linguistics or a PhD in literature. I'd studied literature and film at the University of Georgia, a state school liberally attended by people I'd grown up with. Four years of college parties and rooming with kids I'd known since elementary school, in a town where alcohol poisoning was de rigueur and every place seemed overrun with pledges and their Greek sisters and brothers, was enough to instill in me a potent fear of stagnation and mediocrity, and the desire for a significant change. Moving to California instead of returning to Atlanta post-graduation seemed like a pretty good, if dramatic, way to avoid the former and achieve the latter.

Plans rarely pan out; I knew this. But that was mine, and I was sticking to it. My mom's best friend from childhood lived southeast of Berkeley with her husband and two young boys, and she had offered to help me get on my feet. She was an English professor and had been providing me with ample information about the excellent writing programs in the area. It was to her address that I sent my belongings, with her that I shared my flight info. I had never before purchased a one-way ticket. I was leaving my Atlanta home to go West, to write.

Annie had set up a pet-sitting gig for me with her neighbors down the street. They were off to visit family for two weeks and needed a house sitter to take care of their dogs. Two weeks sounded
like the perfect amount of time to get my bearings, apply for work, and figure out the year that yawned before me.

The neighbors offered me $30 a day; more money than I could wrap my brain around for hanging out with two dogs, feeding and petting and walking them, and sleeping over at their gorgeous Craftsman home.

Dancers in the Dark by Ava J. Smith
Secrets and Seduction: Solacia Cellars by Roberts, Alicia
City of Dragons: Volume Three of the Rain Wilds Chronicles by Hobb, Robin
Breaking Beautiful by Jennifer Shaw Wolf
Emma's Treasures by Rebecca Joyce
Intaglio: The Snake and the Coins by Danika Stone
Dead Languages by David Shields
Guardian of the Dead by Karen Healey
Deep Desires by Charlotte Stein
Milosevic by Adam LeBor