Read Slave To Love (A Journey in Bondage and Discipline) Online

Slave To Love (A Journey in Bondage and Discipline) 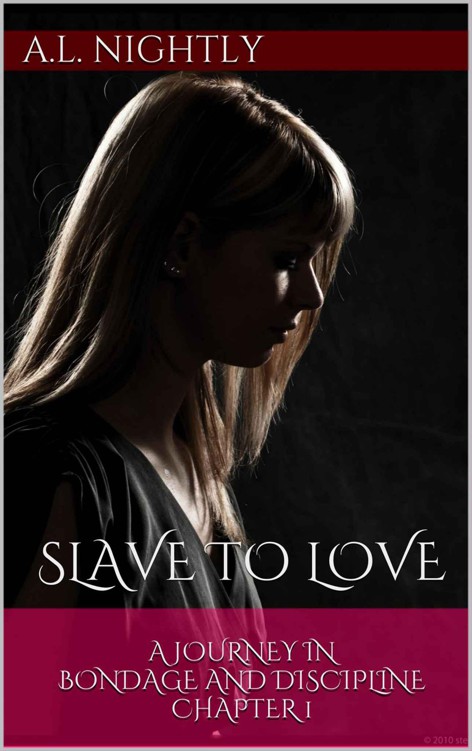 A Journey in
Bondage and Discipline

SLAVE TO LOVE A Journey in Bondage and Discipline is Copyright © A.L Nightly 2013

Sitting down at her computer she idly turned on the monitor. She never turned the thing off anymore just so that if there happened to be anything she wanted to look up or do it was on and available.

Computers were also tragic when it came to eating and corrupting data if you shut them down. She laughed than smiled as she picked up her morning coffee. Taking a sip as she checked her morning email. There were spam messages, a few join now to make money emails, and an e-bill for her cell phone. She sighed and was about to turn the monitor off again, before her heart skipped a beat.

Amid the spam and bills was the message she had been waiting for with excitement as well as dread. It had been months since she had answered his classified ad while on a drunken bender after she had been dumped in the worst way possible.

She had come to her boyfriend's studio apartment hoping to surprise him by bringing dinner and a movie. Unlocking the door she had been greeted to his toned, round buttocks as they thrust up and down in between some very tan legs wrapped around his back. Faye had screamed as she dropped the Chinese takeout to the floor as the romantic movie she had picked from redbox slipped from her hand as well.

Her boyfriend had thrust a couple more times before he turned to look at her.

“
FAYE?!” He shouted as he jumped off of the woman whom he had been thrusting in to. “This isn't what it looks like.”

“
Well, I suppose it is what it looks like, but it...” He ran his hand through his mop of damp golden hair. His well-defined abs heaved as he tried to calm down sand breathe normally. Faye crossed her arms over her ample breasts and sighed as she waited for his excuse. Her eyes slowly trailed down his chiselled pectorals, all the way down to his rock hard abs, to his now waning penis. Thin, but long Faye shuddered a bit as she looked at it. It may not fill her, but it was able to get the job done. None of her other boyfriends had been able to reach or even find her G-spot.

She hadn't even known she had one until his golden cock had found it. She smiled at it. It was probably because it curved slightly to the left. She had tried to find it on her own before, but had no luck. When his dick found it she had screamed herself hoarse as she came harder than she had in her life. She smiled again her upper lip raising slightly to show her teeth. Her boyfriend took her smile to mean that she wasn't angry with him any more.

“
Hey, babe,” He whispered huskily and she noticed his cock had jumped to life and was getting stiffer. “You want to join us?”

“
WHAT?!” Faye exploded jerking her greenish gold eyes up to stare in to his blue ones. She hoped that he was joking, but the look on his face told her that he wasn't joking. “You are unbelievable!”

“
I WAS GOING TO BE THE ONE TO FIND THE THIRD!” Faye shouted at him.

“
WELL!” He shouted back. “YOU TOOK TOO LONG! CASSIE HERE DOES WHATEVER I WANT HER TOO!”

“
Come here and suck my dick, whore!” Her boyfriend barked the order to the tan, leggy, brunette on the bed.

The woman hopped off the bed and came to crouch in front of him. Pushing Faye backwards out of her way in the process. Kneeling in front of Jean, she reached between his legs and cradled his balls. Leaning her head forward she ran her tongue over first one and then the other. She nuzzled them against her cheek, and with her nose. As her boyfriend, Jean,  stared Faye directly in the eyes as this was happening.

Faye couldn't believe what was happening. More so, she could not believe that it was happening right in front of her. Cassie moved her other hand up to grip the shaft of his cock. She stuck out her tongue and started tonguing the mushroomed head while he continued to stare in to Faye's eyes. Shocked, she couldn't seem to drag herself from the room, or away from the overly sexual Cassie. Cassie rubbed his balls as she began sucking on his dick. One hand was running up and down the shaft of his cock. From the base to the head and back again. While the other hand brushed across his balls, gently tugging on them occasionally. She continued to work her mouth magic on his shaft and the head with her tongue and mouth. Cassie moved her hand all the way to the base of his dick before she slammed her whole mouth down on it. Taking it all the way in to the back of her throat.

“
I suppose this means you're breaking up with me,” Her now ex boyfriend laughed from where he lay on the floor holding himself. Faye kicked him in the ribs before turning to storm out of the apartment, leaving the movie, take out, and her old life behind. She had decided at that very moment to never again date an asshole.

She now stared at the response on her screen. She had never actually expected an answer after a week had went by.

Soon, she was jumping websites quickly trying to find something kinky. Something raunchy. Something that would have set her panties on fire if she had still been wearing them. In between watching small sample clips, and reading the few paragraphs of steamy stories that the sites boasted she came upon another site. It was a bondage and discipline hookup site with ads from Masters seeking slaves and subs. It also had subs and slaves looking for Masters, but that wasn't what she wanted as all of the ads seemed whiny to her. She looked over the ads from the Masters. She giggled nervously before she downed her entire glass of wine in nearly one gulp.

She was drinking much more than she had intended to. She had begun the night with a full bottle of her favorite wine, Manischewitz. It was delicious, but it was also very deceiving. You could drink three glasses and not feel the effects of it until you attempted to stand. Faye poured herself another glass and giggled to herself again as she slid her fingers around her clit. Her clit rose up as the blood rushed to it. It may have been the wine or it may have been that she was still angry at Jean for cheating on her. Although, it was probably both. She wavered slightly as she looked at the picture. She remembered Cassie sucking on Jean's cock. Heat jumped in to her face as she got angry that watching that woman suck on her ex's cock had turned her on as much as it did. Faye half growled and, half hissed angrily to herself as she remembered had Cassie choking on his long cock as it pumped his seed down her throat. Faye had wanted to lean forward and kiss the cum out of Cassie's mouth while her Jean bent her over to slide himself in to her. His spit lubed cock would have slid right in to her.

“
Damn him!” Faye said out loud to her empty house. “Damn him and fuck her!”

She smiled to herself as she half jokingly clicked on an ad that had suddenly her caught eye. The ad was displaying a woman kneeling in front of a man tall, darkly tan, dark-haired man. The woman was gorgeous with beautiful long flowing 80's style hair, and was wearing only a simple looking tunic. Her email program brought up an empty email, and she typed her response quickly before she lost the nerve.

Subject:
Answer To My Prayers

I am a single white female, blonde hair, green eyes. I am 23 years old and a college graduate in the field of communication. I am writing to you, because I have seen your ad. I would very much like to  apply to become your live in slave.

I will come to your house, live with you, and obey your every word.

Whips, chains, humiliation, and kinky sex are most welcome!

She fumbled around in the folders in her computer as she searched for a picture of herself. Going through her picture folders, before she finally found one that she considered funny. It was a picture from a college themed Halloween party. The theme had been Star Wars. She dressed as slave Princess Leia. Her long blonde hair was pulled back and secured with a barrette. Her green eyes sparkled in the picture and her long braid draped over one  of her shoulders just as Leia's had been. She had bought the costume especially for that party. Idly, she wondered if she still had the costume somewhere.

She poured herself another glass of wine and hit send.

The next day she had awoken with a hangover and could not believe what she had done. She found it in her sent folder. She could not believe it. She looked at the picture again after browsing through her browser history searching for it.
“Oh, my god... Oh my god...” She squealed helplessly. It was sent and there was no way to get it back. She shook with fear and apprehension as she checked her email. No response. She sighed with relief. No return receipt. That ad was probably from the early 90's considering how the woman's hair looked in the ad. She giggled to herself and took another sip of her coffee, and had forgotten about it. Until now...