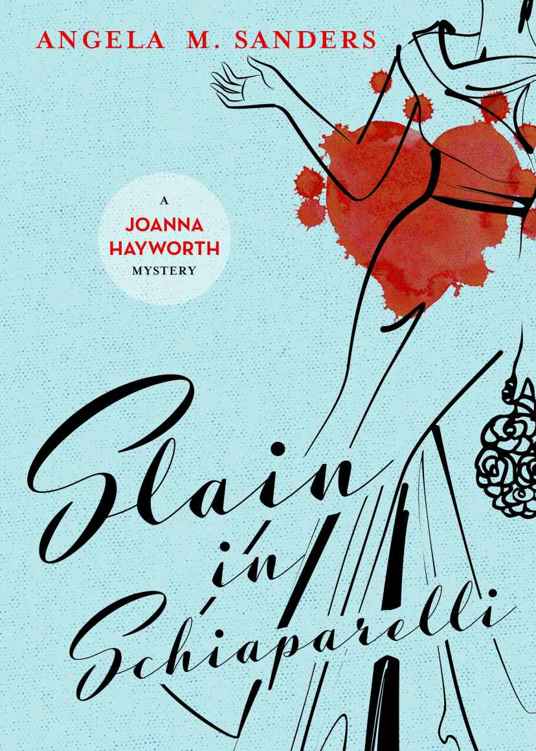 Penny Lavange
, the bride-to be, young and self-centered and somewhat fascinated with new age spirituality, but sweet as they come.

Wilson Jack
, the groom and retired musician known as the J. D. Salinger of rock music. A good twenty years older than Penny, he fronted the world-famous band, the Jackals.

Sylvia Motter
, Wilson’s former long-time lover and mother of his child. She runs a center in Los Angeles for women with eating disorders.

Others
: a maid, a member of the ski patrol, Detective Foster Crisp, and a ghost.

Joanna Hayworth gripped the steering wheel as the windshield wipers batted at the whirling snow. Her headlights barely pierced the darkness on the mountain road.

The little Toyota hit an icy patch and fishtailed. She gasped, but was able to right the car. She let out a long breath and glanced in the rearview mirror to make sure her precious cargo—a 1938 Schiaparelli Tears gown—was still strapped in its archival box on the backseat. Yes. It was safe. Although why Penny had insisted on this gown with its Dali-rendered print of torn flesh for her wedding was beyond her. Still, this weekend would be the highlight of Joanna’s career in vintage clothing. If she arrived in one piece.

Through the trees she made out the glowing windows of Timberline Lodge. Skiers swarmed its parking lot as they packed up to return to the city. She’d been driving for nearly three hours through ice and snow, battling Friday afternoon traffic out of Portland and then the hazardous old highway up Mount Hood. Her back and shoulders ached. Not too much longer to Redd Lodge.

Snow-laden firs thinned then disappeared as Joanna’s car crawled above the tree line. When she emerged from the forest, Joanna did a double take. Redd Lodge loomed over the white-cloaked moonscape like something from a fairy tale. The building rose two stories high with two wings and a central tower topped with—could it be?—a bronzed satyr. Windows blazed with light, and smoke drifted from five or six chimneys into the falling snow.

Only a handful of guests, including Joanna, would be here tonight, but tomorrow another hundred would swarm the lodge for Penny’s wedding to reclusive rock star Wilson Jack.

She edged her Corolla next to a Lexus, turned off the engine, and took a few seconds to pull herself together. She might be here only to help the bride and her sister dress for the ceremony, but no rock star was going to see her like this. She reached into her purse for her lipstick, and her hands brushed the day’s mail from her vintage clothing store, Tallulah’s Closet, which she’d tossed in her bag in a hurry as she’d left. Her fingers lit on thick linen paper. She snapped on the overhead light, and her jaw dropped. It had been years since she’d seen that handwriting—her mother’s. This did not bode well.

She turned the envelope over in her hands, unwilling to open it, yet curious, all the same. Her mother wanted something, she was sure. The only question was what, and how much would it take out of Joanna to satisfy her.

Without warning, her car door yanked open. “Joanna!” Penny, flushed and laughing, held the door. Snowflakes gathered on her hair, and clumps of ice stuck to her satin evening sandals. “You made it. Close your eyes.”

Joanna dropped the envelope into her bag. “But I—”

“My bags—” The Schiaparelli had to be kept at a stable temperature.

Behind Penny, a uniformed maid picked her way across the driveway. “Take those to her room, the one across from mine,” Penny told her. She turned again to Joanna. “Now close your eyes and follow me.”

“If anything happens to that dress—”

The lodge’s ground floor was completely snowed in, but the driveway and a small parking area were plowed, and a tented enclosure tunneled through the snow to the ground floor entrance. The packed snow turned to stone under Joanna’s boots. She stumbled, but Penny’s arm kept her upright.

“Keep your eyes shut. Here are the steps. We’re going up.” Penny’s fingers still gripped tight. “It snows so much here that all the main rooms are on the second floor.”

Warmth, smelling of wood smoke and lilies, hit her face. Was Wilson Jack here? She hadn’t even had time to put on lipstick. As they turned a corner, Joanna fluttered her eyelashes just enough to make out a large room and the shapes of furniture. They must be at the lodge’s center, directly under the tower she’d seen from the driveway.

Joanna inhaled sharply.
My God.
The room was awash with pattern—hand-loomed rugs stretched over the wood-plank floor, and heavy curtains hung on floor-to-ceiling windows. Vases crammed with tropical flowers crowded side tables. Her first impression was of rich color. Then she focused on patterns and saw gryphons wielding knives. Strangest of all was the fireplace, crafted as a gaping mouth with bleached river stones set into the chimney as eyes and jagged rocks as teeth. Flames roared within its maw.

She scanned the room again. No rock star. A bald, meaty guy in a Mao jacket sat near the fire, but he definitely wasn’t Wilson Jack.

“What do you think?” Penny asked.

“I hardly know what to say.”

Penny laughed. “Isn’t it the best? All period Surrealist. I knew you would love it. Look at this chair.” She patted an armchair shaped like an open clam.

It started to come together. “So that’s why you insisted on the Tears dress. Because of its Dali print.”

“Uh huh,” Penny said. “The guy who built the lodge was obsessed with the Surrealists. The whole place is an ode to them.”

“You’re late,” said a woman on a couch shaped like carmine lips.

“Oh Mom, she had a long drive. Leave her alone. Joanna, this is my mother, Bette.”

Bette wore a silk caftan, late 1970s Yves Saint Laurent safari collection, if Joanna’s memory was right. Aside from her platinum hair, she could have been an older, more heavily made up version of Penny. A Papillon as blonde as its owner poked from the caftan’s folds and jumped down to sniff Joanna’s boots.

“Pleased to meet you.” Joanna bent to shake Bette’s hand. She’d refused to rise from the couch. “The ride up was a little treacherous. I’m sorry I couldn’t make it earlier.”

Bette’s gaze flicked up and down Joanna’s length. “Candy Darling, from the Factory, you know, always said one could be late but never be without lipstick. But of course you look lovely.”

“Here. Take this.” Penny lifted a champagne coupe from a maid’s tray.

At the cold fizz of the wine on her tongue, Joanna thought of her mother’s note in her bag. Whatever she’d been writing about, it couldn’t be good.

“Let me introduce you to Reverend Tony.” Penny led Joanna to the man in the Mao jacket. “He’ll be officiating at the wedding tomorrow. He’s the one who told me about Redd Lodge. Isn’t it fabulous? Plus, he’s taught me so much about important spiritual things like—”

Her eyebrows drew together. “What’s that thing where you pay attention to what’s happening right now?”

“That’s it. Mindfulness. Reverend, meet Joanna. She’s helping me get ready for the wedding.”

The Reverend stood. “Pleased to meet you.” In his jacket, he looked more like a gangster at a Star Trek convention than a man of the cloth, but who was she to judge?

From behind her, a voice with a British accent said, “You must be the woman who found Penny’s wedding dress. She’s shown us photos.”

Joanna turned to see a smiling blonde with a dark skunk streak. She’d entered from the wing Joanna assumed led to the bedrooms. With her was a plump girl of kindergarten age. “Yes, I am. Joanna Hayworth.”

“Sylvia Motter,” she said. “Pleased to meet you. And this is my daughter, Marianne.”

Joanna knew Sylvia from the tabloids. She’d been Wilson Jack’s longtime lover, before Penny. Strange to be at her ex’s wedding, although maybe she had to accompany her daughter.

“Pleased to meet you,” the little girl said. “Are you interested in insects? I have a very good book here you might like to read to me.” She held up a picture book with a large grasshopper on the front.

“Marianne, Joanna just arrived. She probably wants to relax after her drive. Besides, you practically have that book memorized.”

Penny’s mother, Bette, didn’t even look up from her magazine. “Dinner’s in ten minutes, Penny. Shall I tell the chef to prepare a plate for—uh—”

“—For Joanna in the kitchen?”

The Girl You Lost: A gripping psychological thriller by Kathryn Croft
War of the Fathers by Decker, Dan
Auctioned to the Alpha: A SciFi Alien Mail Order Bride Romance (TerraMates Book 5) by Lisa Lace
Fire in a Haystack: A Thrilling Novel (Legal Mystery Book Book 1) by Erez Aharoni
Murder Makes Waves by Anne George
The Devil's Gentleman by Harold Schechter
Warautumn by Tom Deitz
The Billionaire Gets His Way by Elizabeth Bevarly
Murder at the Courthouse by A. H. Gabhart
A Gown of Thorns: A Gripping Novel of Romance, Intrigue and the Secrets of a Vintage Parisian Dress by Natalie Meg Evans