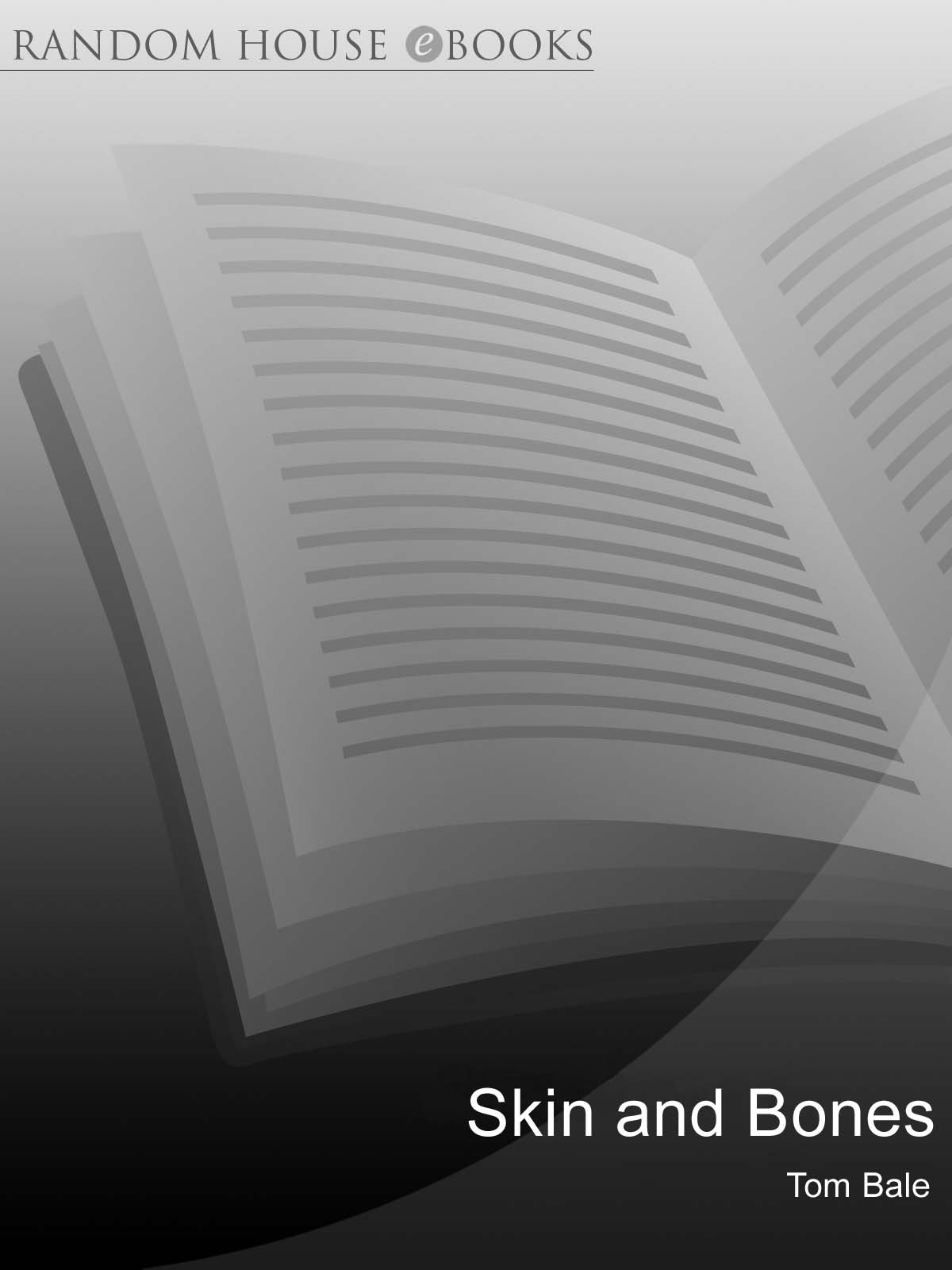 Tom Bale has asserted his right to be identified as the author of this work under the
Copyright, Designs and Patents Act 1988

This electronic book is sold subject to the condition that it shall not by way of trade or otherwise, be lent, resold, hired out, or otherwise circulated without the publisher's prior consent in any form other than that in which it is published and without a similar condition including this condition being imposed on the subsequent purchaser

An imprint of The Random House Group

Addresses for companies within The Random House Group Limited
can be found at
www.randomhouse.co.uk

A glance to her left was all it took. A simple glance as she pushed
open the door to the village shop. If she had kept her eyes straight
ahead, or looked to the right instead, she might never have become
involved. She might have been spared.

Her conscious mind, bruised by the experience of the past month,
refused to believe what it had seen. But her subconscious knew and
understood.

There was a dead man in the street.

It was the third Saturday of January, not quite eight in the morning.
She parked outside her parents' cottage on the outskirts of the village
and decided to delay the day's grim task by a few minutes. The store
was no more than fifty or sixty yards away, tucked around a bend at
the foot of the High Street: a ludicrous name for a place with only
one shop and one pub.

Julia was thirty-one, a tall slender woman with dark shoulder-length
hair. She taught at a junior school in Newhaven, and like the best
teachers she had perfected a good-natured toughness that equipped
her to cope with the worst that any ten-year-old could throw at her.
In the past few weeks she had needed that resilience more than ever.

Her breath rose in clouds as she walked along the edge of the
narrow road. A clean shimmer of frost lay over the grass verge. Roof
tiles sparkled in the late Downland sunrise. The air tasted clean and
sharp, and made her wish she was out jogging. Made her wish she
had the day free to do as she chose.

It took her less than a minute to reach the shop. In that time she
didn't see or hear another soul. No traffic, no tradesmen, no walkers
or cyclists. But it was a Saturday, she reasoned. It was January. It was
cold.

At the point where she glanced to her left, she had a clear view
along the High Street, all the way to the Green Man pub at the north
end of the village. There was a Royal Mail van parked at the kerb up
by the church, facing towards her. She vaguely noticed the rear doors
were open. If there was a body, it was lying in the road just beyond
the van, only the feet visible.

Telling herself she must be mistaken, Julia entered the shop.

A bell rang as she stepped inside. The air was deliciously warm, with
an aroma that always prompted a smile: a cosy blend of bread rolls,
sliced ham, newsprint and mailbags. The kind of smell you'd like to
bottle for nostalgia.
Essence of village store
.

The shopkeeper, Moira Beaumont, was a small twitchy woman in
her fifties. She pulled her baggy cardigan together in response to the
draught.

'Hello, love. You're an early bird. Don't tell me you stayed
overnight?'

Julia's curt shake of her head disguised a shudder. 'I've just driven
here,' she said, adding, 'I can't keep putting it off.'

Moira nodded sadly. 'It's Lewes where you live, isn't it?' She spoke
as though the county town was some distant exotic locale, when in
fact it was less than ten miles away. But then Chilton was the sort of
place where people still returned from Brighton, outraged by beggars
in the street and the brazen display of homosexual love.

Julia browsed the newspapers for a minute, aware of Moira's sly
scrutiny. Trying to spot a crack in the facade. A couple of weeks ago
it would have bothered her, but she was used to it by now. All things
considered, she felt she was coping pretty well.

So why the body in the street
? her subconscious piped up.
Hallucinations were hardly a sign of robust mental health.

Pushing the thought aside, she picked up the
Guardian
, a carton
of semi-skimmed milk and on impulse a packet of chocolate biscuits.
She had a long and difficult day ahead: she deserved a treat.

When she reached the counter Moira leaned over and grasped her
hand. Even before she spoke, Julia knew she was going to use the
gentle hushed tone that people reserve for the recently bereaved.

'I just want to say, I'm dreadfully sorry for what happened. They
were such a lovely couple.'

Julia swallowed and nodded tersely. She had learned just how easily
such expressions of sympathy could unlock the grief.

'Is your brother not coming to help clear the house?' Moira asked,
taking Julia's five-pound note and prodding at the till.

'He offered, but it seems ridiculous when he's up in Cheshire.'

'I suppose so. What a shame you and Peter aren't still together,'
said Moira, blithely unaware of her tactlessness. 'I know your mother
always thought you were made for each other.'

'So did I,' said Julia.
Another subject she was keen to avoid
.

'I'm not sure it's got much future, to be honest,' she said.

Moira clicked her tongue. 'You've really been in the wars, haven't
you?' There was a moment when Julia felt sure she was going to say
something about bad news coming in threes, but perhaps thought
better of it. Instead she puffed out a breath. 'I'd give you a hand myself,
but Len's away to Leicester to watch the football. Time off for good
behaviour,' she added wryly.

'You'll feel better when it's done, believe me.' Moira pressed her
hands together as if in prayer. 'In my experience, it's the most unexpected
things that can catch you out. If they do, you know where
to find me.'

'Thanks.' Julia propped the biscuits under her arm and picked up
the milk. For the sake of conversation, she said, 'Quiet round here
this morning.'

Moira took a moment to consider. 'I suppose it is. I had a couple
of folk in when I opened at seven, Mrs Collins and Tom Bradbury
with those ruddy dogs of his. But it's freezing out there. I bet everyone's
decided to stay in bed, lucky beggars.'

'I expect that's it,' Julia agreed.

When she reached the door, Moira called, 'Keep in touch, won't
you? Don't be a stranger!'

Julia trapped the door with her foot and turned back, smiling. At
that moment, with her own heart weighing so heavily, she would never
have believed Moira had less than twenty minutes to live.

Leaving the shop, her attention was caught by a poster in the window
of the house opposite. Another of Philip Walker's campaigns, she guessed
from the headline in bold four-inch letters. Because of what was to
happen next, the words would be forever imprinted on her memory.

This is OUR village!
Don't let them DESTROY IT!!

She snorted. Walker was the outspoken leader of a group of local
activists, waging a war against developers seeking to expand the village.
Probably a futile endeavour, if history was any judge, but Julia had a
sneaking sympathy for them. If nothing else, her parents had been
enthusiastic supporters of the cause.

And then, unable to resist the nagging voice of her subconscious,
she turned to look north once again. She had to know if she had imagined
it.

There was still no sign of activity in the village. The Royal Mail
van remained in place. The rear doors were definitely open. And the
body still lay behind the van, feet angled up on the pavement.

Shielding her eyes against the low morning sun, she squinted and
took a few paces forward. She could feel her mouth going dry, her
heart speeding up. She pictured herself slowly climbing the stairs in
her parents' cottage. She couldn't go through that again, couldn't
expose herself to—

And you can't let him die
, a stronger voice spoke up.
He might have
had a heart attack or a stroke. He might be epileptic
. Her knowledge
of first aid was only rudimentary, but she could at least raise the alarm
and keep him warm.

Her confidence wavered as she drew near the van. It looked as
though he'd collapsed and rolled partly beneath the rear doors. A
bundle of letters lay in the gutter, the breeze not quite strong enough
to tease them free of the rubber band that restrained them.

Maybe a hit-and-run
, she wondered, steeling herself for an
unpleasant sight.

But it was far worse than a hit-and-run. The postman had gunshot
wounds to his head and chest. One eye was missing, and the other
stared lifelessly at her, wide with surprise that this could happen in
such a privileged enclave of Sussex. The van was splattered with blood
and brain and skull fragments.

Julia gasped and dropped her milk. The carton split open and leaked
across the pavement, mixing with the blood in the gutter.