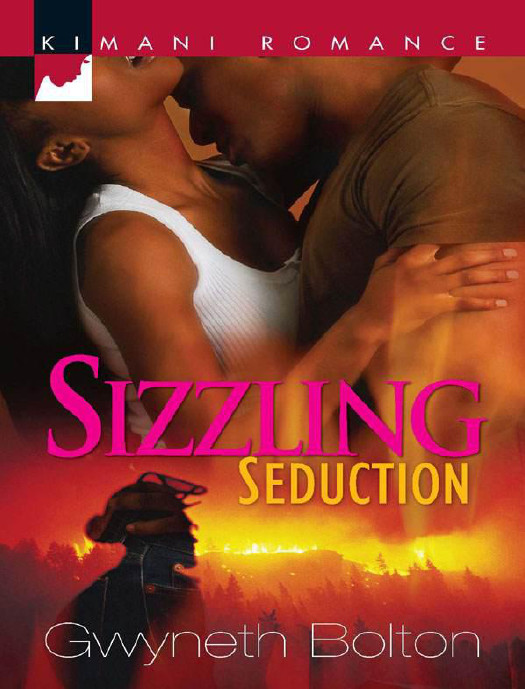 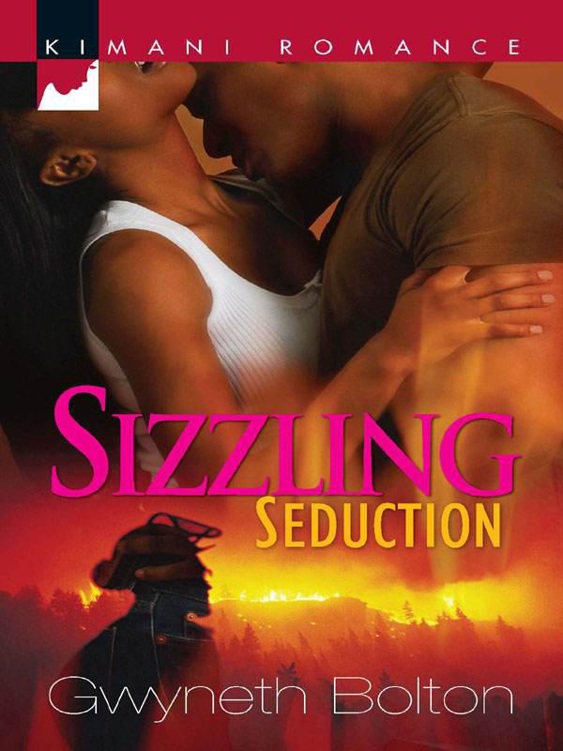 Aisha licked her lips as she thought

He hadn’t lied at al. He certainly had moves. She wondered what other kind of moves he had, and she licked her lips again.

This time without any warning or announcement, Patrick swooped down and covered her lips with his. And this wasn’t one of those soft, fleeting brushes he’d been priming her up with. No, this was a long, savoring, enveloping kiss.

She opened to his demanding mouth and let her tongue taste what it real y wanted to taste. Him. He pul ed her off the sofa and onto his lap, continuing to devour her with his scalding-hot mouth. She had started something that he was clearly going to finish.

Aisha felt overwhelmed. She had never had a man be so attentive to her needs. She started to glimpse the gentle soul that was hiding behind the domineering persona and began to fear that she was already losing her heart to him.

When Patrick kissed her again, she knew for sure that it was already gone.

If Only You Knew

The Law of Desire

was born and raised in Paterson, New Jersey. She currently lives in central New York with her husband, Cedric.

When she was twelve years old she became an avid reader of romance by sneaking into her mother’s stash of Harlequin and Silhouette novels. In the ’90s she was introduced to African-American and multicultural romance novels and her life hasn’t been the same since.

Bolton has a BA and an MA in English/creative writing and a PhD in English/composition and rhetoric. She teaches classes in writing and women’s studies at the col ege level.

She has won several awards for her romance novels, including five Emma Awards and a Romance in Color Reviewer’s Choice award for new author of the year. When she is not teaching or working on her own romance novels, she is curled up with a cup of herbal tea, a warm quilt and a good book. She can be reached via e-mail at [email protected], and readers can also visit her Web site, www.gwynethbolton.com.

Thanks for writing me and tel ing me that you enjoyed the Hightowers. And thanks for helping to spread the word about the series. I appreciate you al very much. I am because you are. Thank you!

Thank you so much for your support of the Hightower Honors series. There are real y no words to properly express how much your e-mails and notes have meant to me. I’m happy that so many of you have fal en in love with this family as much as I have. And for those readers who read the earlier novels and decided that Patrick Hightower was the one for them, here he is!

We al know Patrick was the president of the he-man woman-haters club. He is the oldest Hightower brother and the most resistant to love. So you know once love caught up to him, Cupid had to knock him off his feet hard and fast.

Too bad he ends up fal ing for a woman just as resistant to fal ing in love as he had been!

Aisha Mil er is the perfect woman for Patrick, but the divorced mother and kindergarten teacher refuses to acknowledge it. It’s up to Patrick to pul out al the stops and seduce the woman of his dreams right into his arms.

Sizzling Seduction
is a slow-burning love story that steadily rises to an uncontrol able, passionate heat. It is a story about trust and learning to love again.

I hope you enjoy Patrick and Aisha’s story!

First, I want to thank God for the many blessings in my life.

I’d also like to thank the fol owing people because they were so instrumental in my getting the Hightower firemen right: Kristi Johnson, Wayne Rochette and Lieutenant Kent Young. Al three of these people are part of that special team who help to protect and serve. Kristi, a volunteer EMT, and her partner Wayne Rochette, a volunteer firefighter, helped me to flesh out Joel Hightower’s motivation back when I wrote
Make It Hot.
My editor wanted me to dig deeper and real y get into Joel’s head about why he loved being a firefighter. Kristi and Wayne provided the perfect insight! Kristi was then kind enough to bug Wayne one more time and they put me in contact with Lieutenant Kent Young of Fire Station Five in Syracuse.

Lieutenant Young took time out of his busy schedule to talk to me about the job and give me a tour of the station. He also gave me the coolest coloring book they give to schoolchildren who visit the station.
Syracuse Fire
Department Presents Fire Safety with Helpful Hector the
Smoke Detector and Buddy the Battery
gave me the perfect inspiration for the initial meeting scene between Patrick and Aisha when she visits the fire station with her kindergarteners. Lieutenant Young’s comments and tour helped me to real y flesh out what Patrick’s day might be like. Any mistakes or misrepresentations of the firefighting life are mine and mine alone.

Final y, I’d like to thank my family: my mother, Donna, my sisters Jennifer, Cassandra, Michel e and Tashina, my nieces Ashlee and Zaria, and my husband, Cedric.

“R
ise and shine, Dilon. Time to get up and get dressed for school. Regular oatmeal or cream of wheat?” Aisha Mil er stood in the doorway of her ten-year-old son’s Spider-Man-decorated room and started their morning ritual. She knew that she would probably have to make at least one more trip back there before he dragged himself from bed.

He made an indistinguishable groaning sound, but he didn’t move.

We don’t want to be late. I’m going to start the oatmeal. By the time it’s done and I come back here again, you better be washed up and getting dressed. Your clothes are on the chair.”

He made another groaning sound. But this time he moved and sat up, pul ing the Spider-Man sheets from over his head. “Cap’n Crunch,” he uttered before flopping back down.

Aisha grinned. Her son certainly kept her on her toes.

“Cream of wheat,” she countered.

He got up from bed and did a slow-dragging walk to the bathroom. “Corn Pops.”

“Umm…no…Oatmeal or cream of wheat?

He gave a resigned sigh. “Cream of wheat.”

“Okay, get washed up and dressed. We need to be out the door before seven-thirty. I’m taking my morning class on a trip to the fire station today and I need to get to school a little early in order to handle some paperwork. Paperwork that needs to be turned in to Principal Gibson today. So stop dragging those little feet and let’s get rol ing.”

He groaned again and half dragged on down the hal .

She couldn’t help but chuckle. He reminded her so much of herself when she was a kid. She’d never liked getting up in the morning for school and always tried to negotiate with her mother for an extra five minutes. In fact, if she didn’t have to get both herself and Dil on ready, she would have hit the snooze button a few times and would just be crawling out of bed herself.

When she got the cream of wheat going she took a trip back down the hal and saw that Dil on had made it to the living room and was watching morning cartoons while he put on his clothing. Real y, he was staring at the screen and punctuating the long stretches of viewing by placing one item of clothing on his body at a time. At the rate he was going, he’d be dressed by the time the afternoon talk shows came on.

She walked over and turned off the television. “This is why you don’t have a television in your bedroom, Dil on.

And what did I tel you about coming in here and turning on the television before you get dressed? If you got up on time and got dressed quickly, you’d have a couple of minutes to catch some cartoons before it was time to go.”

“Don’t aww mom me. Hurry up before your breakfast gets cold.”

Dil on moved considerably faster without the distraction of the television and soon he was fed and they were out the door, in the car and on their way.

“I have the coolest idea, Mom.” Dil on literal y bounced with excitement in the passenger seat.

“You can write my teacher a note and take me to the fire station with your class today. That would be so cool. I’ve never been to a real fire station. I wonder if they’d let me slide down the pole?”

“I can tel you the answer to that. They wouldn’t because you won’t be going to the fire station. You can’t miss class to go on someone else’s trip. And you wouldn’t want to hang out with my little darling kindergartners.”

Dil on got a pensive expression on his face as if he was considering the merits of getting out of school versus spending the morning with kindergartners. He frowned.

“Wel , it seemed like it might have been a cool idea. But now that I think about it…”

“Mmm-hmm…” She pul ed into the parking lot. Before getting out she leaned over and offered her cheek to her son. He had reached the age where any public displays of affection from Mom would embarrass him to no end. So she always made sure to get her sugar before they got out of the car.

Dil on offered only one “Awww, Mom” before giving her a quick peck on the cheek and dashing out of the car to the school building.

She got out, grabbed her bags and supplies and fol owed closely behind. “And you stop that running once you get in the building. You don’t want Principal Gibson to give you detention.”

“Okay, Mom.” Dil on slowed his pace when he reached the big blue doors of Public School #21. He pul ed the door open and held it for her as she walked in.

She laughed. “Keep it up and I’m going to give to give you a big hug in front of al your friends.”

She watched her son walk up to the second floor of the building for his before-school math tutoring. Ms. McCloud was kind enough to see him before school to help him with his math.