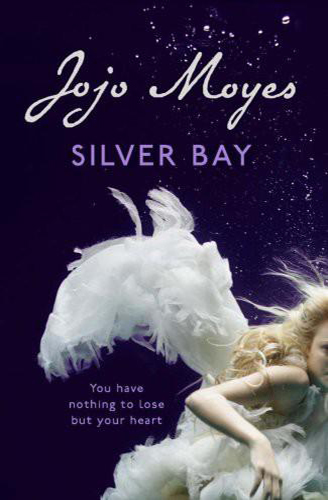 The Ship of Brides

First published in Great Britain in 2007 by Hodder & Stoughton

The right of Jojo Moyes to be identified as the Author of the Work has been asserted by her in accordance with the Copyright, Designs and Patents Act 1988.

No part of this publication may be reproduced, stored in a retrieval system, or transmitted, in any form or by any means without the prior written permission of the publisher, nor be otherwise circulated in any form of binding or cover other than that in which it is published and without a similar condition being imposed on the subsequent purchaser.

For Lockie, for everything he is,

and everything he will be

My name is Kathleen Whittier Mostyn, and when I was seventeen I became famous for catching the biggest shark New South Wales had ever seen: a grey nurse with an eye so mean it still looked like it wanted to rip me in two several days after we’d laid it out. That was back in the days when all of Silver Bay was given over to game fishing, and for three straight weeks all anyone could talk about was that shark. A newspaper reporter came all the way from Newcastle and took a picture of me standing next to it (I’m the one in the bathing-suit). It’s several feet taller than I am, in that picture, and the photographer made me wear my heels.

What you can see is a tall, rather stern-seeming girl, better-looking than she knew, shoulders broad enough to be the despair of her mother, and a waist trim enough from reeling and bending that she never needed a corset. There I am, unable to hide my pride, not yet aware that I would be tied to that beast for the rest of my days as surely as if we had been married. What you can’t see is that he is held up by two wires, supported by my father and his business partner Mr Brent Newhaven – hauling it ashore had ripped several tendons in my right shoulder and by the time the photographer arrived I couldn’t lift a mug of tea, let alone a shark.

Still, it was enough to cement my reputation. For years I was known as the Shark Girl, even when my girlhood was well over. My sister Norah always joked that, given the state of my appearance, they should have called me the Sea Urchin. But my success, my father always said, made the Bay Hotel. Two days after that picture appeared in the newspaper we were booked solid, and stayed booked solid until the west wing of the hotel burnt down in 1962. Men came because they wanted to beat my record. Or because they assumed that if a
girl
could land a creature like that, why, what was possible for a
proper
fisherman? A few came to ask me to marry them, but my father always said he could smell them before they’d hit Port Stephens and sent them packing. Women came because until then they had never thought it possible that they could catch game fish, let alone compete with the men. And families came because Silver Bay, with its protected bay, endless dunes and calm waters, was a fine place to be.

Two more jetties were hurriedly constructed to cope with the extra boat traffic, and every day the air was filled with the sound of clipped oars and outboard motors as the bay and the sea around it was virtually dredged of aquatic life. The night air was filled with the revving of car engines, soft bursts of music and glasses clinking. There was a time, during the 1950s, when it is not too fanciful to say that we were
the
place to be.

Now we still have our boats, and our jetties, although we only use one now, and what people are chasing is pretty different. I haven’t picked up a rod in almost twenty years. I don’t much care for killing things any more. We’re pretty quiet, even in the summer. Most of the holiday traffic heads to the clubs and high-rise hotels, the more obvious delights of Coffs Harbour or Byron Bay and, to tell the truth, that suits most of us just fine.

I still hold that record. It’s noted in one of those doorstop-sized books that sell in huge numbers, and no one you know ever buys. The editors do me the honour of ringing me now and then to let me know my name will be included for another year. Occasionally the local schoolchildren stop by to tell me they’ve found me in the library, and I always act surprised, just to keep them happy.

But I still hold that record. I tell you that not out of any desire to boast, or because I’m a seventy-six-year-old woman and it’s nice to feel I once did something of note, but because when you’re surrounded by as many secrets as I am, it feels good to get things straight out in the open occasionally.

If you stuck your hand in right up to the wrist, you could usually uncover at least three different kinds of biscuit in
Moby One
’s jar. Yoshi said that the crews on the other boats always skimped on biscuits, buying the cheapest arrowroot in value packs at the supermarket. But she reckoned that if you’d paid nearly a hundred and fifty dollars to go out chasing dolphins, the least you could expect was a decent biscuit. So she bought all-butter Anzacs – thick, oaty, double-layered with chocolate – Scotch Fingers, Mint Slices wrapped in foil and very occasionally, if she could get away with it, home-baked cookies. Lance, the skipper, said she got decent biscuits because they were pretty well all she had to eat. He also said that if their boss ever caught her spending that much on biscuits he’d squash her like a Garibaldi. I stared at the biscuits, as
Moby One
headed out into Silver Bay, holding up the tray as Yoshi offered the passengers tea and coffee. I was hoping they wouldn’t eat all the Anzacs before I had a chance to take one. I’d snuck out without breakfast, and I knew it was only when we headed into the cockpit that she’d let me dip in.

‘
Moby One
to
Suzanne
, how many beers did you sink last night? You’re steering a course like a one-legged drunk.’

Lance was on the radio. As we went in, I dropped my hand straight into the biscuit jar and pulled out the last Anzac. The ship-to-ship radio crackled, and a voice muttered something I couldn’t make out. He tried again: ‘
Moby One
to
Sweet Suzanne
. Look, you’d better straighten up, mate . . . you’ve got four passengers up front hanging over the rails. Every time you swerve they’re decorating your starboard windows.’

Lance MacGregor’s voice sounded like it had been rubbed down with wire wool, like the boat’s sides. He took one hand off the wheel and Yoshi gave him a mug of coffee. I tucked myself in behind her. The spray on the back of her navy blue uniform sparkled like sequins.

She nodded. ‘I got a good look before we set off.’

‘He’s so done in he can’t steer straight.’ He pointed out of the droplet-flecked window towards the smaller boat. ‘I tell you, Yoshi, his passengers will be asking for refunds. The one in the green hat hasn’t lifted his head since we passed Break Nose Island. What the hell’s got into him?’

Yoshi Takomura had the prettiest hair I’d ever seen. It hung in black clouds round her face, never tangling despite the effects of wind and salt water. I took one of my own mousy locks between my fingers; it felt gritty, although we had been on the water only half an hour. My friend Lara said that when she hit fourteen, in four years’ time, her mum was going to let her put streaks in hers. It was then that Lance had caught sight of me. I guess I’d known he would.

‘What are you doing here, Squirt? Your mum’ll have my guts for garters. Don’t you have school or something?’

‘Holidays.’ I stepped back behind Yoshi, a little embarrassed. Lance always talked to me like I was five years younger than I was.

‘She’ll stay out of sight,’ Yoshi said. ‘She just wanted to see the dolphins.’

I stared at him, pulling my sleeves down over my hands.

He stared back, then shrugged. ‘You gonna wear a lifejacket?’

‘And not get under my feet?’

I tilted my head. As if, my eyes said.

‘Be nice to her,’ said Yoshi. ‘She’s been ill twice already.’

‘Ah . . . Hell. Look, just make sure your mum knows it was nothing to do with me, okay? And listen, Squirt, head for
Moby Two
next time – or, even better, someone else’s boat.’

‘You never saw her,’ said Yoshi. ‘Anyway, Greg’s steering’s not the half of it.’ She grinned. ‘Wait till he turns and you see what he’s done to the side of his prow.’

It was, Yoshi said, as we headed back out, a good day to be on the water. The sea was a little choppy, but the winds were mild, and the air so clear that you could see the white horses riding the little breakers miles into the distance. I followed her to the main restaurant deck, my legs easily absorbing the rise and fall of the catamaran beneath me, a little less self-conscious now that the skipper knew I was on board.

This, she had told me, would be the busiest part of today’s dolphin-watching trip, the time between setting off and our arrival at the sheltered waters round the bay where the pods of bottlenoses tended to gather. While the passengers sat up on the top deck, enjoying the crisp May day through woollen mufflers, Yoshi, the steward, was laying out the buffet, offering drinks and, if the water was choppy, which it was most days now that winter was coming, preparing the disinfectant and bucket for seasickness. It didn’t matter how many times you told them, she grumbled, glancing at the well-dressed Asians who made up most of the morning’s custom, they
would
stay below decks, they
would
eat and drink too quickly and they
would
go into the tiny lavatories to be sick, rather than hanging over the edge, thereby making them unusable by anyone else. And if they were Japanese, she added, with a hint of malicious pleasure, they would spend the rest of the voyage in a silent frenzy of humiliation, hiding behind dark glasses and raised collars, their ashen faces turned resolutely to sea.

I followed her out on to the foredeck, pulling my windcheater up round my neck. The wind had dropped a little but I could still feel the chill in the air, biting at my nose and the tips of my ears. Most of the passengers didn’t want anything – they were chatting loudly, to be heard above the engines, gazing out at the distant horizon, and taking pictures of each other. Now and then I dipped my hand into the biscuits until I’d taken what I thought they would have eaten anyway.

Ten by Lauren Myracle
The Devil's Concubine (The Devil of Ponong series #1) by Braden, Jill
Teamwork Means You Can't Pick the Side That's Right by Scott Adams
Beyond Armageddon: Book 02 - Empire by Anthony Decosmo
Blackbird by Tom Wright
Chapter one by jaden Nakaning
Liquid Cool: The Cyberpunk Detective Series by Austin Dragon
My Fake Summer Boyfriend by Ann Herrick
Faithless by Bennett, Amanda
Being Happy by David Tuffley