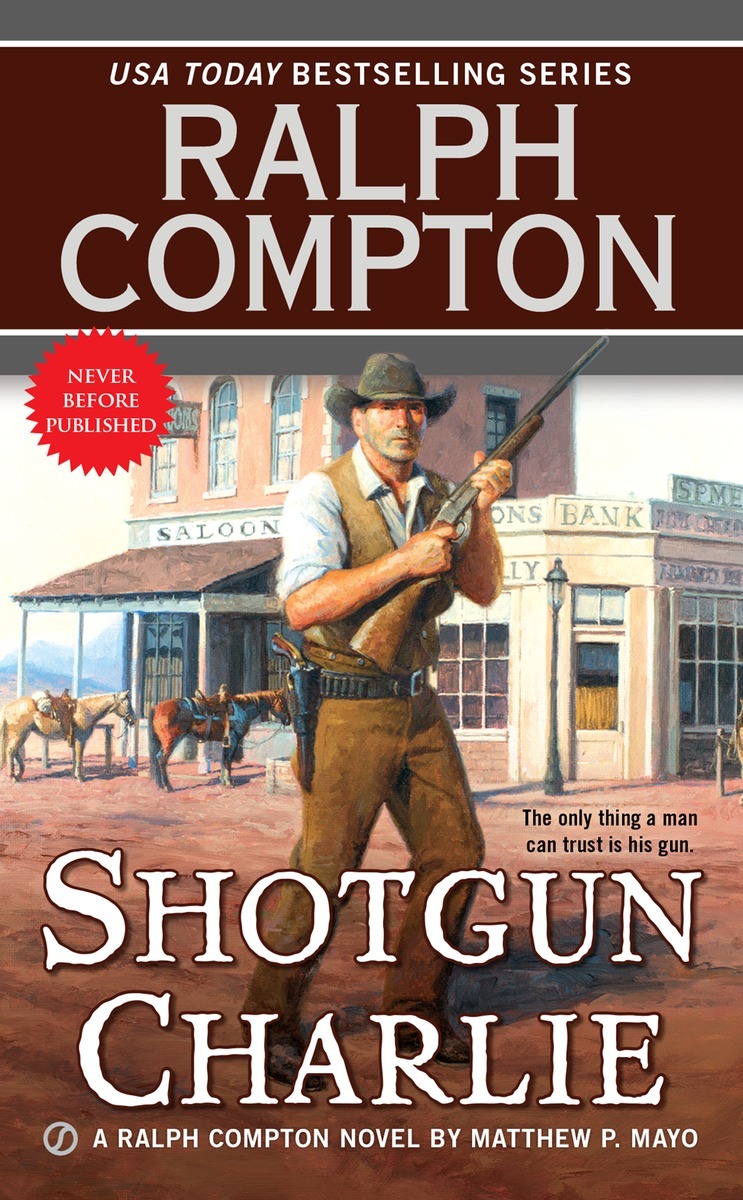 “It wasn't like that, Pap. Honest.” But he had no time for further thought on the subject, because Pap freed himself from the desperate grip Tawley had on the back of his vest. He blustered himself like a crazed chicken right at Charlie, in the process whipping by the wide-open stranger. Before the old man's claws connected with Charlie, his eyes went wide and he gagged out a sound Charlie hadn't ever heard from a man before. But the reason why interested him much moreâHaskell's wide hands were encircled around Pap's throat.

Without thinking, Charlie went low, wedged a big arm between the two struggling bodies, and drove upward. It didn't knock the stranger's grip loose as he'd intended. Instead it appeared to have the opposite effect, and succeeded only in tightening the stranger's grip on Pap's neck. The old man's eyes bugged out like two bloodshot quail eggs and his tongue had begun to purple.

Without thinking, Charlie drove his right fist straight at the side of Grady Haskell's head and relished the cracking and shifting that he felt underneath his knuckles. The man's head snapped to the side and his grip on Pap's old neck peeled apart. But to Charlie's surprise, Haskell spun back around and stared right at Charlie, smiling. 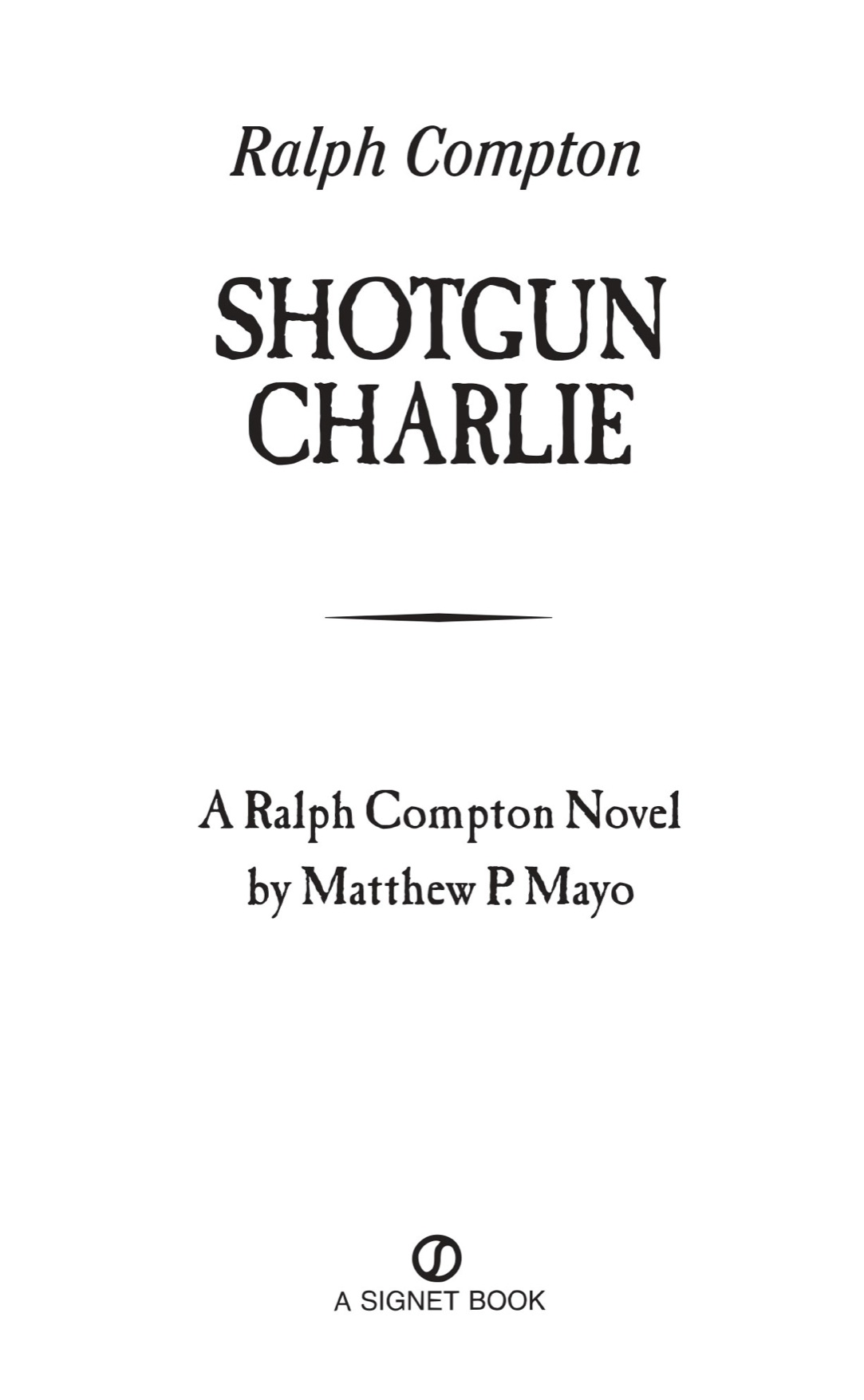 First published by Signet, an imprint of New American Library,

This is a work of fiction. Names, characters, places, and incidents either are the product of the author's imagination or are used fictitiously, and any resemblance to actual persons, living or dead, business establishments, events, or locales is entirely coincidental.

An Exciting Preview of
The Law and the Lawless

T
his is respectfully dedicated to the “American Cowboy.” His was the saga sparked by the turmoil that followed the Civil War, and the passing of more than a century has by no means diminished the flame.

T
rue, the old days and the old ways are but treasured memories, and the old trails have grown dim with the ravages of time, but the spirit of the cowboy lives on.

I
n my travelsâto Texas, Oklahoma, Kansas, Nebraska, Colorado, Wyoming, New Mexico, and ArizonaâI always find something that reminds me of the Old West. While I am walking these plains and mountains for the first time, there is this feeling that a part of me is eternal, that I have known these old trails before. I believe it is the undying spirit of the frontier calling me, through the mind's eye, to step back into time. What is the appeal of the Old West of the American frontier?

I
t has been epitomized by some as the dark and bloody period in American history. Its heroesâCrockett, Bowie, Hickok, Earpâhave been reviled and criticized. Yet the Old West lives on, larger than life.

I
t has become a symbol of freedom, when there was always another mountain to climb and another river to cross; when a dispute between two men was settled not with expensive lawyers, but with fists, knives, or guns. Barbaric? Maybe. But some things never change. When the cowboy rode into the pages of American history, he left behind a legacy that lives within the hearts of us all.

The dove's throaty growls had startled him at first, made him jump right off the bed. Surely she was in pain, some sort of trouble. A bad dream at best. Then it had occurred to Charlie that no, this was a natural sound. And this was as close as he'd ever come to hearing it.

Through a thin lath-and-plaster wall mostly covered with paperâstill pretty but not nearly so vivid as he was sure it had been a long time since, with tiny pink flowers, roses he thought they might be, surrounded by even tinier green leavesâCharlie finally knew the sounds for what they were. They were the sounds of a man and a woman doing what he was still a stranger to. Would be forever, he guessed.

He wondered as he was roused again and again from a neck-snapping slumber, if he should rap on the wall. He didn't want to invite trouble, but he needed sleep. He felt sure when he'd checked in that he was about to receive the finest night's sleep a body could get.

That the hotel was in the habit of renting out unoccupied rooms for short-term trysts was something that Charlie would not know for a long time to come. But that night's introduction had startled him. All the long days preceding his arrival to town had been one odd surprise after another, saddening and shocking and worrisome. And so this last one, despite his earnest hopes, proved more of the same.

This was what the world was like? Not much different from the everyday misery of life on the little rented farm with his gran. He'd hoped for so much more. As he listened to the moans and thumpings and occasional harsh barks of laughter from the men, he hoped that at least his mule, Teacup, was safe and sound and enjoying a good night's slumber in the livery.

It had cost a few coins that he knew he shouldn't have spent, but he'd never indulged in anything in his life and the money he'd earned at that last farm had burned a hole in his trouser pocket until he'd spent some.

Charlie passed some of the long, noisy night by counting out the last of it, searching his pockets over and over again, sure he'd dropped some of the money somewhere along the way. But no, when after long minutes he'd tallied the figures in his head, he had one dollar and twelve cents left. And he decided then that something had to change. He figured he'd worry about it in the morning, but morning came with little interruption from night by sleep, save for brief snatches.

He left the hotel early, when the sun was barely up. The woman's cries had continued long into the early hours, then dwindled, allowing him precious little rest. Before he left the room, his eyes had once again taken in the small lace doily, a marvel of hand-stitching the likes of which he'd never seen. He'd studied it for some time the night before, then set it aside.

It was white, with a pointed-edge pattern, round, smaller than his palm, but large enough to fit under the dainty oil lamp on the chest of drawers. When he'd lifted the lamp to peek at it, he saw tiny flowers, a dozen of them arranged in a circle. It was one of the single most pretty things he'd ever seen in his life, if you didn't count all the wonders nature had up her sleeve.

Those could hardly be topped by man, he figuredâa new calf, the soft hairs on its head, how it felt when you rubbed it before the calf awoke, the long lashes on its eyes staring up at you in innocence, spring buds on an apple tree, then how they unfolded over a week or so, the little leaves getting bigger and darker and tougher as the season wore on.

They were special things, to be sure, but that little doily was a corker, maybe because it had no real purpose? Even its prettiness was hidden by the oil lamp. How many folks got to see what some woman had worked so hard to make, hidden as those little flowers were by the lamp? He appreciated them, at least.

And so as he left the room, he spied that doily and thought to himself, Why not, Charlie? Why not have something pretty in your life? After all, didn't they sort of cheat you out of your good night's sleep? And so he had slid it off the polished top of that chest of drawers and poked it quickly down into his trouser pocket with a long, callused finger, reddening about the neck, cheeks, and ears even as he did so.

By the time he reached the bottom of the long staircase in the lobby of the hotel, he felt as if his entire head might catch fire. He shuffled toward the front door and thrust a hand into his pocket. His fingers tweezered the crumpled little doily. He would set it on the counter and leave, walk right out. It was so early no one was there. He lifted it free and that was when he noticed the desk clerk, same man as the night before, in the mirror, was watching him from across the big room where he was busy sweeping the hearth of the great fireplace. How had Charlie not seen the thin, pasty-looking man when he came down the stairs?

Charlie nodded. The man watched him, didn't look particularly angry. No angrier than he'd been the night before when Charlie checked in. He'd looked confused then and looked more of the same now. Charlie pushed the doily back down into his pocket and struggled with the fancy brass knobs of the lead glass doors, worry warring with fear and guilt in his brain. Worry and guilt that he'd stolen the first thing he'd ever stolen in his life, fear that he'd soon be arrested, and slim wonder too that maybe, just maybe, he'd get away with it.

By the time he reached the livery and, with frequent glances back over his shoulder, saw no one trailing him from the hotel, he became more and more convinced that he and he alone deserved to own that doily, that it was made and meant for him to admire, to appreciate. He rode out of that town and vowed, just the same, never to return to Bakersfield. Just in case.

Little did he know that a few short years later he would be a member of an outlaw gang dead set on committing a crime that made stealing a doily the very least of life's offenses.

Ride to Redemption by D. J. Wilson
Exiled by Nina Croft
Barbara Pierce by Sinful Between the Sheets
When Pussywillows Last in the Catyard Bloomed (rtf) by Roger Zelazny
The Alibi Man by Tami Hoag
Nine Uses For An Ex-Boyfriend by Sarra Manning
Wild Cat by Jennifer Ashley
Missing Your Smile by Jerry S. Eicher
FIVE WILL GET YOU TWENTY (Food Truck Mysteries Book 9) by Chloe Kendrick
Only By Your Touch by Catherine Anderson