Read Shadows on the Stars Online

Shadows on the Stars 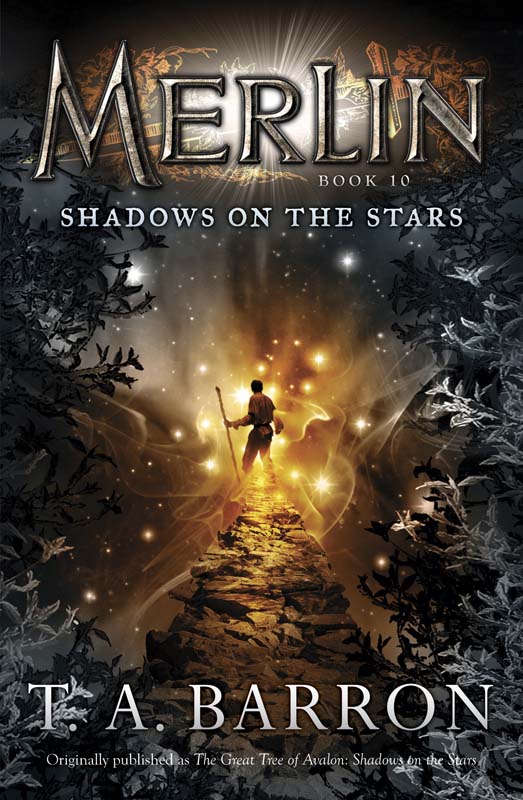 What are those stars?

Tamwyn peered at this star—and suddenly blinked in astonishment. The Heart of Pegasus seemed to be beating! He opened his eyes just a sliver more, as wide as he could stand, to look more closely. And yes, that star was indeed pulsing like the heart of a great steed.

A lizard scurried, just then, across his foot. Tamwyn flinched in surprise. In doing so, he lost sight of the pulsing star. He started to look for it again, but found himself gazing instead at a different constellation.

The black hole that had once been the Wizard’s Staff.

He stared hard at the spot where those seven stars had once burned so bright, hoping to find some clue about what had really happened to them. And what all this had to do with Rhita Gawr.

Something strange caught his attention. Peering closely, he could detect vague circles of light up there. Yes . . . seven of them. And the circles sat in precisely the same places as the lost stars!

Though his whole body shook with excitement, Tamwyn fought to keep himself steady. The stars, or some parts of them, were still there. And if they were still there . . . they could, perhaps, be lit again.

He swallowed. Could only Merlin himself do such a thing?

First published in the United States of America as
The Great Tree of Avalon: Shadows on the Stars
by

Published as
Shadows on the Stars
by Puffin Books, a division of Penguin Young Readers Group, 2011

THE LIBRARY OF CONGRESS HAS CATALOGED THE PHILOMEL BOOKS EDITION AS FOLLOWS:

Summary: As warlord Rhita Gawr tries to gather enough power to destroy Avalon, Tamwyn—the heir to the powers of his grandfather, Merlin—and his friends embark on separate quests to try to save their world.

Except in the United States of America, this book is sold subject to the condition that it shall not, by way of trade or otherwise, be lent, re-sold, hired out , or otherwise circulated without the publisher’s prior consent in any form of binding or cover other than that in which it is published and without a similar condition including this condition being imposed on the subsequent purchaser.

To Mother Earth,
beleaguered yet bountiful

With special thanks, once again, to
Denali Barron and Patricia Lee Gauch,
brave companions to Tamwyn, Elli, Scree . . . and myself.

In truth, I wonder just why I have chosen now to embark on this long and dangerous voyage to the stars. Surely not because my strength is at its peak; surely not because the timing is auspicious. Perhaps I am not seeking the stars after all, but merely fleeing my own past. The stars are bright and far away, but my wounds are dark and ever near.

—
Fragment from a letter, dated Year of Avalon 987, left by the explorer Krystallus Eopia, son of the deer woman Hallia and the wizard Merlin

Rise, tall trunk of Middle Realm,
Stretching ever high—
each for misty, branching trails:
Stairway to the sky,
Stars are flaming nigh.

—
Ancient ballad of Avalon, believed to have been composed by High Priestess Rhiannon

Deep
underground, in a cavern of dark shadows, something even darker hovered in the air.

Slowly it spun—a venomous snake of smoke. As it twirled, the air around it crackled with black sparks. And wherever its tail brushed against the cavern floor, stones burst apart like trees shattered by lightning, leaving only heaps of smoldering ash.

The dark spiral floated menacingly toward a small, radiant crystal on a stone pedestal. The crystal’s light, frail but still defiant, glowed white with ribbons of blue and green. As the shadowy being approached, it swelled a bit brighter.

“Now observe,” hissed the smoky serpent. “I will demonstrate how to destroy this crystal of élano, just as we will soon destroy our enemies.” The serpent laughed, its voice bubbling like molten rock. “But first, my pet, we will turn its power to our own purposes.”

His back pressed against the cavern wall, Kulwych shifted nervously. The cloaked sorcerer chewed his once perfectly clipped fingernails, then ran his hand across the scarred hollow of his empty eye socket. “M-m-mmmyesss, my lord Rhita Gawr.”

“I have but one small regret,” hissed the spiral as it hardened, coalescing into darkness that was almost solid. “By now, no doubt, you have already dispatched the one who calls himself
the true heir of Merlin.
And I would have rather enjoyed making him my crystal’s first victim.”

Kulwych bit harder on his fingers. “Er, well, in that case, my lord . . . you’ll be pleased to learn that—”

“He
isn’t
dead?” spat the spiral. Instantly, it shot at the sorcerer’s face, stopping only a hair’s breadth away from his throat. “Have you failed me, my little magician, my plaything?”

Shivering, his head against the wall, Kulwych made a frightened gurgle.

The dark being swayed back and forth, sizzling like a tongue of lava. “You have seen my wrath before, haven’t you?”

Kulwych’s one eye darted to the headless corpse of the gobsken on the cavern floor. He tried to speak, but could only gurgle again.

For an endless moment, the smoky serpent hovered, crackling in the air by the sorcerer’s throat. Then, with a whiplike snap, it pulled away, floating back toward the crystal. Kulwych gasped and crumpled to the stone floor.

Meadowside by Blakeston, Marcus
Adam by Joan Johnston
Tempt Me When the Sun Goes Down by Lisa Olsen
The Terminals by Royce Scott Buckingham
All Rivers Flow to the Sea by Alison McGhee
Through Glass Eyes by Muir, Margaret
Carolina Dreaming: A Dare Island Novel by Virginia Kantra
The American Girl by Monika Fagerholm
Here Comes Trouble by Anna J. Stewart
A Dream for Tomorrow by Melody Carlson