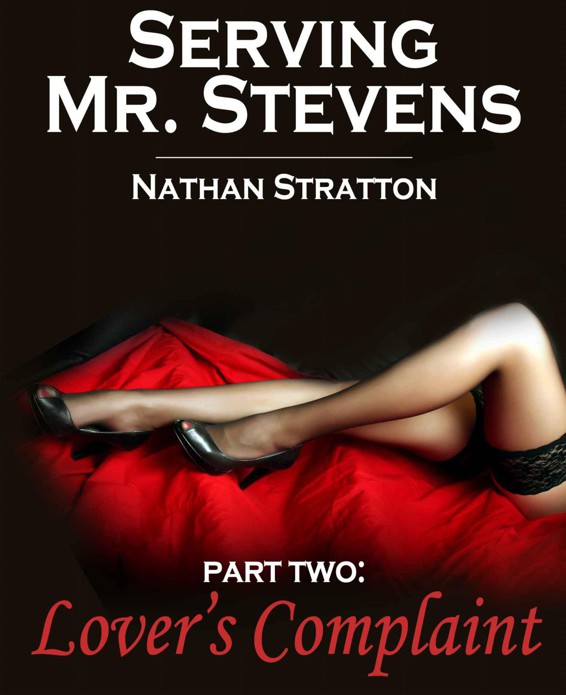 Reproduction of this work prohibited unless the author grants permission.

Download
Part One: The Contract
on Amazon.com here:
http://www.amazon.com/dp/B00B3DGLR4/?tag=nathastrat-20

If you’ve purchased this book, please consider leaving a review after reading it.

I read all my reviews, and I take feedback very seriously. Thank you.

Look for the next installment of
Serving Mr. Stevens
,
“Part 3: Masquerade,” in March 2013!

Make sure to pick up
Part 1 of Serving Mr. Stevens, “The Contract,”
if you haven’t already!

Chapter 2: The Morning After

Chapter 4: Fit to be Tied

…Guiding me by the hand, he led me to the door of his office. He kissed me hard on the mouth, just once. I tried to steal another kiss, but he turned away.

“That will be all for now, Candace. Thank you. This will be a very demanding job, but I trust that you won’t disappoint me. And believe me, you’d better go home and get some rest. You start tomorrow.”

As soon as I was alone in the entryway, all my emotions came flooding out at once. I’d found out what the proposition was, but now I had even more questions than before. And if Mr. Stevens was meeting the President, then just how powerful was he?

One thing’s for sure, though, I thought to myself. No matter what happens now, my life is never going to be the same.

Still standing in the entryway to Mr. Stevens’ office, I took a moment to collect myself as best I could. I looked down at my ripped-up clothes, running my finger along a torn piece of my blouse. It was a visual reminder of what Mr. Stevens had just done to me, the way he’d tossed me around and used me for his pleasure. I’d gone out and bought this outfit solely for the job interview, and now it was completely ruined; the rough sex we’d had made sure of that quickly enough.

Was it worth it?
I mused to myself. I rubbed my backside, which was still throbbing from the hard slaps he’d given me. It hurt – quite a bit, in fact. But I didn’t mind the pain. It was a delicious kind of hurt, and just like my torn blouse, it was a reminder of Mr. Stevens, and of the contract I’d just signed with him. I grinned, closing my eyes and visualizing the heat of the previous moment. Him in his business suit, pounding me from behind against his executive desk. My hands bound tightly behind my back, rendering me absolutely powerless to resist him. My orgasm… and his.

Oh, yeah,
I thought to myself. It was worth it, all right.

Just then, a sharp knock rang out on the exterior doorway, chasing all those pleasant memories out of my head. My eyes sprang open, and I stiffened in place as if I’d been caught doing something wrong.

A clipped, high-pitched voice came from the other end. “Candace?”

It was Katarina, the receptionist. The realization put me even more on edge. She’d acted like such a bitch to me earlier; I could only imagine what she was going to say to me now.

I hesitated, perking my ear towards the door. “Yes?” I called out.

“Oh, so you
are
in there,” she said. “I just wanted to let you know that I’ve got a change of clothes for you out here... Mr. Stevens asked me to get them for you. Would you like them now?”

I took a tentative step towards the door. “Um, all right,” I said. I cracked the door open slightly, suddenly too shy to let her see me like this. I peeked out with one eye to see Katarina standing there with a bundle of clothing in her hand.

“Thanks,” I said, grabbing the bundle from her and shutting the door again. I quickly changed, casting off my torn items and pulling on a pair of loose-fitting gray slacks and a dark red top. They were beautiful pieces, and they fit perfectly. It was though Mr. Stevens, somehow, had known exactly my size.

I smiled, looking back towards the inner door towards his office.
Is he still in there?
I wondered. He’d said he had to run off right away – for a meeting with the President, no less, although I wasn’t yet sure I believed that. But I took pleasure in imagining him sitting there at his big oaken desk, pen in hand, sending off the order to make sure I was dressed in only the best clothing money could buy. I had no idea if that was what happened, of course – but the uncertainty of it made the gesture all the sweeter. He was keeping his motives a mystery, leaving me to fill in the blanks for myself. I shook my head, still smiling. This guy was an enigma, that was for sure. And I couldn’t
wait
to figure him out.

I opened the door and stepped back out into the lobby, clutching my torn clothing under my arm. Katarina was back at her post, standing behind the receptionist’s desk. She looked up at me as I walked out, and gave me a look I couldn’t interpret. Again, I got the distinct sense that she was judging me, that she was dying to pass some insulting comment. But she didn’t scare me. I met her eyes and walked towards her with all the confidence I could muster, not backing away from her gaze.

As I approached her desk, her eyes fell to the clothes under my arm. I caught the faintest hint of a reaction on her face, but she masked it just as quickly. When she looked back up at me, she was perfectly composed.

“May I help you with anything else?” she asked, her prim-and-proper façade firmly back in place. She paused after speaking, cocking her head at me and narrowing her eyes so slightly as to be nearly imperceptible. Her eyes flitted up to my tousled hair and down to my face again. “…Or did Mr. Stevens already take care of you?”

Suddenly, it all fell into place. Something clicked in my mind:
she’s jealous
, I realized.
That’s why she’s acting like this.
It all made perfect sense now – I was the new girl, after all, and who knows whether Katarina and Mr. Stevens had any sort of history between them. All of a sudden, I felt a strange, haughty pride in my disheveled appearance, my messed-up hair and smudged makeup. I knew she understood
exactly
what had transpired between Mr. Stevens and me, and there was absolutely no mistaking that jealous gleam in her eye.

The signs couldn’t be clearer: Katarina’s thinly-veiled disdain was just an attempt to intimidate me. And I was
not
about to let that happen.

I smirked at her, letting the sting of her words glance off me harmlessly. “He certainly did,” I responded, a big, friendly smile on my face. “Would you like to hear the details?”

I had to stifle a laugh when I saw her recoil at my question. She was totally thrown-off, and I had the pleasure of watching her scramble for an appropriate rebuttal. “…I don’t inquire into Mr. Stevens’ personal affairs,” she said finally.

“Excellent,” I replied. “Then have a nice day.” And with that, I turned on my heels and walked away from her, not waiting for a response.

As I sauntered towards the elevator, I was inwardly cheering myself on while trying to maintain my outward composure. I
rocked
that, I thought to myself. I’d completely turned the tables on her, and I’d definitely shown her who was the boss. I felt like the shy, dorky girl in high school who’d just put the head cheerleader in her place.

I walked into the elevator, my body buzzing with adrenaline. As the elevator doors closed, I allowed myself the slightest glance in her direction; she was still staring after me, a look on her face like she didn’t know what to do.

As soon as the doors closed, I breathed a huge sigh of relief.
What a rush.
“You go, girl,” I said out loud. Suddenly, I was exhausted -- not just from the interaction with Katarina, but from the manhandling I’d been given by Mr. Stevens just before. It was time to go home, I decided, and have a well-deserved nap.

But for that whole evening and into the night, sleep was difficult to come by. My mind was a swirling mess, and I couldn’t stop replaying the events of the day over and over in my head. I tossed and turned that night, thinking about my encounter in Mr. Stevens’ office. No one had ever treated me like that before. I thought about when he slapped my ass and asked me if it hurt. “Yes,” I’d said. “Good,” he’d replied. His words still rang in my ears, hours after the fact. That delicious mix of pleasure and pain… I couldn’t get enough of it, even if the severity of his demeanor did scare me a bit.

The Boy from Aleppo Who Painted the War by Sumia Sukkar
Makeover Magic by Jill Santopolo
Mujercitas by Louisa May Alcott
Outbreak! Plagues That Changed History by Barnard, Bryn
A Guilty Ghost Surprised (An Indigo Eady Paranormal Cozy Mystery series) by Gwen Gardner
A Darker Shade of Magic by V.E. Schwab
The Greek's Stolen Bride by Kate Hewitt
The Elephant Whisperer: My Life With the Herd in the African Wild by Lawrence Anthony, Graham Spence
The Sword of God - John Milton #5 (John Milton Thrillers) by Mark Dawson
Wolves’ Bane by Angela Addams