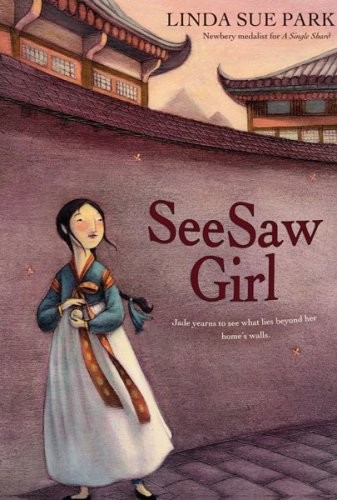 ILLUSTRATED BY JEAN AND MOU-SIEN TSENG

To my parents:
My mother, who taught me to read
My father, who took me to the library

The illustrations were executed in watercolor.
The type was set in 14-point Weiss.

Printed in the USA.

"Is anyone coming?" Jade Blossom whispered.

Graceful Willow peeped around the edge of the sliding paper door. She looked back at Jade and shook her head, putting her finger to her lips.

Jade felt her insides trembling as she stole quietly to the opposite side of the room. Two dozen rabbit-hair writing brushes lay on the tidy shelf in an orderly row. The brushes were arranged by size, the smallest with the merest wisp of tip, the largest as wide as two fingers.

Jade snatched them up as quietly as she could. She hurried back across the room to where Willow stood guard by the door.

"Hurry!" begged Willow, handing her the bowl of ashes. "They might come back at any moment."

Jade unrolled a pile of old rags. She emptied the bowl of ashes and soot onto the rags and piled the brushes on top. Then she wrapped the rags carefully around the brushes. Rolling the untidy parcel around and around in her hands, she made sure that inside, every brush was well covered in soot.

Jade tiptoed back to the shelves, opened the parcel, and gingerly put the brushes back in their places. She stepped back, eyeing them for a moment. Both the handles and brush tips were black to begin with; the black of the soot could not be seen. Jade grinned, pleased with her work. This would surely be one of their best pranks ever.

From her lookout post, Willow gasped. "They're coming!" She turned back to Jade, beckoning wildly.

Jade darted to her side, and together they almost fell over the one-step threshold of the room. Hand in hand, breathless and laughing, they ran across the Inner Court to the safety of the women's quarters just as the boys came into view.

Schoolmaster had taken Jade's brothers and cousins to the Garden of Earthly Peace that afternoon. It was a beautiful spring day, and the plum trees were in bloom. The eight boys were then going to write poetry about what they had seen. Jade and Willow had been waiting for this opportunity to steal into the Hall of Learning while the boys were away.

Willow was Jade's aunt, but having fifteen years to Jade's twelve, she had always been more like a friend than an elder. Though it was Jade who planned their pranks, Willow was always on hand to lend support. This prank had taken several days of planning.

The boys would fetch the brushes and pots of ink from the shelves and begin to write on scrolls of fine rice paper. Their hands would be covered with soot, and they would blotch and smear their work. They would not be able to form the graceful characters demonstrated by Schoolmaster.

Jade and Willow knew well that none of the boys would utter a word of surprise or dismay: It was considered extremely rude to interrupt Schoolmaster's lessons. Rather, they would have to struggle along as best they could—and when their work was inspected ... The girls could hardly wait for the reaction.

Hastily, they wiped out the bowl, discarded the rags, and washed their hands. Then they gathered up their embroidery projects and joined the other women and girls of the household in the women's hall.

Each worked on her own project, the older women talking quietly, the girls chatting more brightly. Sometimes one of the women would offer guidance to a daughter or niece, while the girls admired the work of their elders. It was a serene yet social time, a time Jade usually enjoyed.

But today she did not feel very serene; her laughter bubbled inside her like a rice pot ready to boil over. She fidgeted, unable to concentrate on her work, and had to pick out many of her stitches. Jade did not dare look at Willow for fear they would begin laughing again.

After a little while a loud voice could be heard from across the Inner Court. The women and girls raised their heads from their work and listened for a moment. Jade's mother shook her head, saying, "Schoolmaster is not pleased with the boys' work today. Tiger Heart and the others must work harder on their studies."

Willow let out an odd sound, like a snort, and quickly brought her hand to her mouth, as if to hide a cough. Jade felt as though she were strangling. She bent her head farther over her work and felt her stomach shaking with smothered laughter.

The rest of the afternoon passed pleasantly enough. At last Jade's mother folded her work, which was the signal for the other women and girls to put their work away as well. The gong sounded; dinner preparations would begin.

Just then the boys could be heard, calling out and running across the Inner Court. The whole group of them clamored around the door to the women's hall. They could not, of course, enter without permission from Jade's mother.

"Someone did something to the writing brushes!" he exclaimed breathlessly. "Our hands got all black—we couldn't write—" The other boys joined in, speaking all at once indignantly and holding up their hands for everyone to see.

Eldest Aunt began to scold the boys. They had been in the garden, hadn't they? They had probably gotten their hands dirty fooling around, rather than paying attention to Schoolmaster. Besides, what did they expect to find in the women's hall? The girls had been busy all afternoon!

"Now, be on your way," said Eldest Aunt. "We have the evening meal to prepare." The women shooed the boys away from the door and left the room, with the girls following. Jade and Willow hung back and, when everyone else was out of earshot, finally gave in to their laughter. They shrieked until tears rolled down their cheeks. It was a good thing no one saw them. They too would have been scolded; such laughter was not proper for women or girls.

The next day, however, the laundry was no laughing matter. The boys' soot-soiled clothing all had to be laundered, and it was far too much work for the maidservants alone. Jade and Willow were ordered to help.

The maidservants usually laundered most of the clothes for the household, but the Han women and girls did the important ceremonial clothes, and Jade's mother herself took care of her husband's clothing. His outfits were considered too important to be entrusted to the servants or younger women.

First, all the soiled clothes were ripped apart along the seams and hems. Everyone knew that flat pieces of cloth could be more thoroughly cleaned and smoothly pressed than the garments themselves. Once the clothes had been ripped apart, they were washed and hung to dry.

Then the dried clothes were beaten to get rid of all the wrinkles. Jade hated this part most of all. The flat pieces of cloth were laid on a flat stone and beaten with two round wooden sticks. Jade had to pound at the clothes until her arms ached and her hands were sore. The tattoo beat of laundry sticks sounded constantly in the Han house, sometimes even into the night. Finally, the clothes were sewn back together again.

Wearing clean clothes daily was a luxury only the wealthy could afford. Jade's mother and aunts saw to it that the members of the Han family were always clothed in a manner worthy of their place in society. There were times like today, as she bent for hours over the sticks, when Jade thought a lower place in society and a little less laundry would not be such a bad thing.

Jade and Willow were rarely punished for their pranks. Jade's mother might scold them when their mischief was discovered, but she also forbade any retaliation by the boys. They tried nonetheless; Tiger Heart had once succeeded in dropping several small green caterpillars down the necks of the girls' short linen jackets. But Jade had noticed that Tiger had lost interest in retaliating lately, and to her relief, none of the younger boys had stepped into his place.

Jade had also heard her mother speak calming words to Eldest Aunt when the girls' mischief was discovered.

"It's not proper behavior for girls," Aunt had protested.

"No harm has been done," Jade's mother replied.

On hearing this, Jade kept her head bowed so that Eldest Aunt would not see the look of satisfaction she could not keep from her face.

One warm afternoon in early summer Jade thought the pounding of laundry would drive her crazy. She paused to rest her aching forearms for a moment. Beside her, Willow was sewing the pressed pieces of cloth into garments again. She had worked her way through a pile of such pieces, putting the finished clothes into a basket at her side.

Willow had just completed one of Tiger Heart's jackets. As she put it aside and reached for the pieces of the trousers, Jade seized her arm.

The two girls bent their heads together.

Jade whispered excitedly, "You could sew a seam across the bottoms of the legs. And when Tiger tries to put them on, his feet will get stuck!"

Willow giggled, automatically putting her hand in front of her mouth. It was considered impolite for a woman to show her teeth when smiling or laughing. Then she shook her head at Jade.

"That
would
be funny. But I don't want to do it. The trousers might get torn. Then we'd really get into trouble."

"Please! I can't do it myself. The others might notice—you know I'm not allowed to sew clothes back together yet. Eldest Aunt doesn't think my stitching is good enough."

The smile faded from Willow's face, and she shook her head again more firmly.

"No. Let's just go to the garden after we're finished here. It's a beautiful day..."

Jade slumped back in disappointment. Willow had never before refused to go along with one of her pranks.

"You go to the garden. I have other things to do."

Willow looked stricken for a moment, then pressed her lips together and dropped her eyes to her work. Jade felt a twinge of regret. She hadn't meant to quarrel. But it was such a good idea! Why was Willow being so stubborn?

Jade went back to thumping sullenly at the laundry.

The girls finished their work in silence. Willow knotted the thread for the last seam, folded the trousers, and laid them on top of the neat pile in the basket. Then she stood and walked toward the door.

Jade hesitated only a moment. "Wait, Willow! I'll go with you." Willow's face lit with a smile, and the two girls skipped to the garden together. Jade's heart felt as light as her steps; she couldn't imagine even a single afternoon without her dearest friend.

Jade Blossom lived in a beautiful house in the middle of Seoul. Her family was highly respected because her father was an important adviser to the king.