Read See How They Run Online

See How They Run 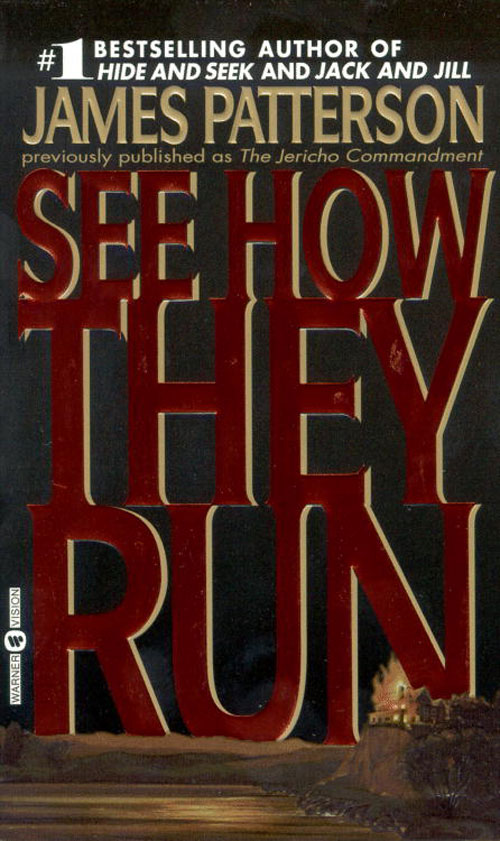 All rights reserved. Except as permitted under the US. Copyright Act of 1976, no part of this publication may be reproduced, distributed, or transmitted in any form or by any means, or stored in a database or retrieval system, without the prior written permission of the publisher.

This edition is published by arrangement with the author.

Originally published as
The Jericho Commandment
.

Visit our Web site at
www.HachetteBookGroup.com
.

Vision is an imprint of Grand Central Publishing. The Vision name and logo is a trademark of Hachette Book Group, Inc.

SEE HOW THEY RUN

“MR. PATTERSON IS A SKILLFUL PLOTTER.”

“JAMES PATTERSON KNOWS HOW TO SELL THRILLS AND SUSPENSE IN CLEAR, UNWAVERING PROSE.”

“JAMES PATTERSON IS TO SUSPENSE WHAT DANIELLE STEEL IS TO ROMANCE.”

“PATTERSON DEVELOPS CHARACTERS WITH BROAD STROKES AND FINE LINES. EVEN THE VILLAINS ARE MULTILAYERED AND BELIEVABLE.”

“PATTERSON KNOWS HOW TO KEEP THE POT BOILING.”

“PATTERSON IS AN EXCELLENT WRITER.”

AND HIS LATEST
NEWYORK TIMES
BESTSELLERS:
HIDE AND SEEK

“A TWISTY NARRATIVE THAT BARRELS ALONG SWIFTLY … A HAIR-RAISING RIDE.”

“A NOVEL BUILT FOR SPEED.”

“MASTERFUL … A RIVETING PSYCHOLOGICAL THRILLER. … PATTERSON GIVES HIS ADMIRERS A ROLLER-COASTER RIDE THROUGH A VIVID, EMOTIONAL TALE THAT LEADS INEXORABLY TO A TRULY SHATTERING CLIMAX.”

“TOUGH TO PUT DOWN. … TICKS LIKE A TIME BOMB, ALWAYS FULL OF THREAT AND TENSION.”

“AS GOOD AS A THRILLER CAN GET.”

“BURSTING WITH SUSPENSE AND SURPRISE.”

“A WILD RIDE, FROM THE IVIED HAILS OF SOUTHERN ACADEMIA TO THE CRASHING BIG SUR SURF. ALEX CROSS IS TO THE ‘90s WHAT MIKE HAMMER WAS TO THE ‘50s.”

The novels of James Patterson

Violets Are Blue Along Came a Spider

The 6th Target
(and Maxine Paetro)

The 5th Horseman
(and Maxine Paetro)

4th of July
(and Maxine Paetro)

The Quickie
(and Michael Ledwidge)

Maximum Ride: Saving the World and Other Extreme Sports

Step on a Crack
(and Michael Ledwidge)

The Jester
(and Andrew Gross)

When the Wind Blows

See How They Run

Miracle on the 17th Green
(and Peter de Jonge)

Season of the Machete

For previews of upcoming James Patterson novels and information about the author, visit
www.jamespatterson.com
.

For my grandparents, Charles and Isabelle Morris

Like most of my novels,
See How They Run
comes right out of my worst nightmares rather than real life. Obviously, the United States boycotted the Moscow Olympics in 1980. I ask the reader to follow my alternate entry in this story.

See How They Run
couldn’t have been written without the help of a former Israeli soldier now living in New York; without the vivid stories of a survivor who had made the pilgrimage to every concentration camp site in Europe—who had also made contact with the radical group known as DIN. Most of all, the book couldn’t have reached its present form without the nagging help of the son of a Brooklyn rabbi, who, more often than I would have liked, reminded me to get it down right.

Five months before the beginning.

A benevolent midaftemoon sun spattered golden streaks over the historic domes and needle spires, up and down the gray-yellow stones of the ancient Holy pity walls. A bottle of Schweppes Bitter Lemon, a pot of English Breakfast tea, and a cold Maccabee beer were brought to the three old friends sitting on the pretty hotel terrace.

It is a fact recorded in several news correspondents’ notebooks—though not as yet in their newspapers—that a sacred and very secret Jewish brotherhood had existed in Western Europe, America, and Israel since the end of World War II. The group was composed of workingmen and women; of farmers, entertainers, taxi drivers; of wealthy doctors, solicitors, merchants, rabbis; of important government leaders and elite army officers.

No matter how these men and women earned their livings, however, the sworn purpose of the cabal thrust another task on them.

They were to remember the terrible Holocaust—every last abhorrent detail. They were to protect against another unholy conflagration with their lives if need be. They were to relentlessly hunt down those responsible for the first abomination against the Jewish people and against mankind
.

Two of the three friends clustered together on the hotel terrace were the secret brotherhood’s original leaders—the third was a woman, a wealthy contributor from America.

Seated as they were in view of the gates of Old City, the three made a curious and memorable portrait—a noble picture worthy of exhibition in the Jewish Museum.

All survivors of the Nazi death camps thirty-five years before.

The previous evening, Elena Strauss and Ben-Iban had jetted to Jerusalem after receiving an urgent message from Rabinowitz:

THE TIME HAS COME TO REMEMBER OUR SACRED PLEDGE. … THE FOURTH REICH IS ABOUT TO RISE. IT IS TIME TO CONCLUDE THE DISCUSSION STAGE OF OUR PLAN TO ONCE AND FOREVER STOP THE ENEMY.

Hector Berlioz’s
Symphonie Fantastique
—then a BBC news broadcast—served as civilized background for the several private conversations progressing in grunts and murmurs on the grandly elegant hotel terrace. The clean smell of almonds and oranges was everywhere in the air.

Out on the streets of Rehavia, Arab cabdrivers could be heard mischievously blaring their Mercedes taxi horns. Out there, too, Hasidim tourists trudged along in their broad hats and stiff beards, pointing at Moses Mantefiore’s windmill, acting as if the Ba’al Shem Tov himself were standing at every cross street.

In the beginning of their meeting, the three old friends merely chatted.

The most casual talk possible under the circumstances.

They sipped their drinks, and they offered opinions on a recent Black September bombing of a children’s school bus in Bayit Vegan. They spoke of a best-selling book from England, which had documented that the PLO was receiving huge sums of money from neo-Nazis living in southern France. They gave Freudian interpretations of Teddy Kollek’s grand reconstruction dreams for Jerusalem.

Brie’s City of Angels (Submissive in Love, #6) by Red Phoenix
Heather Graham by Down in New Orleans
The Wicked Duke by Madeline Hunter
Warlord Reunited: 3 (Barbarian Claims) by Sax, Cynthia
The Cruise of the Snark by Jack London
For Those Who Dream Monsters by Anna Taborska
Don't Look Away (Veronica Sloan) by Kelly, Leslie A.
Redemption by Lillian Duncan
Damage Done by Virginia Duke
The Law Killers by Alexander McGregor