Read Seduced by a Scoundrel Online

Seduced by a Scoundrel 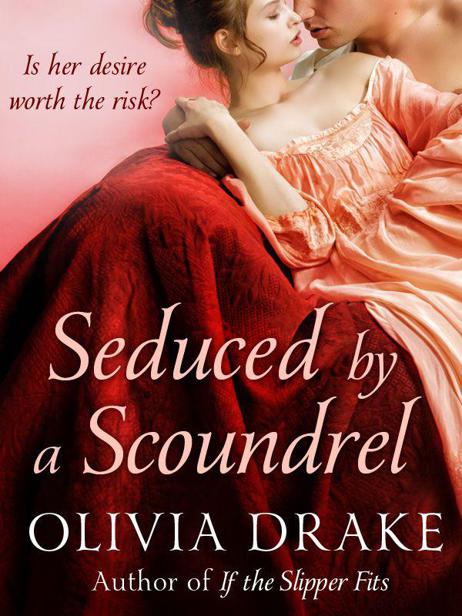 Your fifty years of marriage are truly golden!

A special thanks to Mike Hermann for providing this math-challenged author with the right numbers.

And last but not least, thanks to Debbie Thomas for introducing me to the real Drake and Alicia, who very graciously lent me their names.

Lady Alicia Pemberton braced herself to commit an act of desperation.

Holding tightly to the wrought-iron balustrade, she subdued her inner agitation and followed the butler up the grand staircase in Wilder’s Club, St. James’s Street. Their footsteps echoed through the soaring entrance hall with its tall white columns and dark green walls, decorated with paintings and statuary. The place might have been a mansion in Mayfair.

But she knew it to be a glorified gaming hell.

To her left loomed a spacious salon, the groupings of leather chairs empty save for a portly man engrossed in the
Times
of London. In the vast room to the right, a pair of gentlemen played billiards. A crack resounded as a yellow ball shot across the green baize and disappeared with a muffled thump into a hole in the corner of the table. The players were so intent on their game, they never even noticed a lady had invaded their exclusive club.

It must be too early yet for drunken revelry.

The elegant decor made Alicia aware of her own drab appearance, the outmoded spencer with its sadly frayed cuffs, the blue muslin gown gone pale from many washings, the bonnet with its girlish cluster of white ribbons more suited to the frivolous debutante she had once been.

She entombed her regrets. Those carefree days were gone. Dreams were for starry-eyed girls, not a mature woman with a family to protect. A family in dire trouble.

The butler stopped before a gilt-trimmed door. “Ye don’t look the usual sort,” he said in a gravelly Scottish burr.

His voice jolted Alicia out of her dark thoughts. “I beg your pardon?”

“Wilder’s sort.” A giant of a man with a leather patch over one eye, he stuck his grizzled face down to her level and subjected her to an unservile scrutiny. “If ye want a bit of advice, miss, ye should run along home and back to yer needlework.”

Alicia thought he was the one who needed advice—in manners. “I have business with Mr. Wilder.”

“Business, ye call it? He doesna pay for his pleasure, if that’s what ye’re thinking. Never has, not with the females swarming ’round him like ants to honey.”

Her stomach clenched despite her resolve to numb her emotions. Was her purpose so obvious?

She schooled her features into an expression of aristocratic dignity. “Mr. Wilder is expecting me. You may show me in now.”

The butler shrugged. “Have it yer way, then.” He swung open the door with his ham-fisted paw and motioned her inside.

Determined to get this loathsome interview over with and done, Alicia marched past him. The impertinent servant went out. The door clicked shut.

She was on her own.

The dim antechamber smelled faintly of expensive leather and musky cologne. Above a half-moon table hung a painting of some wild, rocky landscape. A patterned carpet in crimson and blue muffled her footsteps. She kept her gloved hands at her sides, her posture erect. It seemed perversely important that she maintain a ladylike demeanor.

Going through an arched doorway, she entered a large room lit by a silver branch of beeswax candles. The draperies were closed to the late afternoon sunlight, and a mahogany desk dominated the chamber. On the polished surface, a ledger lay open, and beside it a gray-feathered quill stood in a silver inkpot.

She scanned the marine-blue walls and wine-dark leather chairs, the bookcases filled with volumes. It might have been a wealthy banker’s office—except for the pair of ivory dice scattered on the desk. Shuddering, she turned quickly from the sight.

The coal fire hissed into the silent air, a counterpoint to the tension inside her. She had sent up her calling card with the nosy butler. So where was Drake Wilder?

She had taken a chance on finding him here. Leading a heathen life, he’d probably been gambling until dawn. He would sleep during daylight hours while decent, hardworking folk went about their duties. And if he deliberately meant to make her wait, let him. She was well acquainted with games of power. She had, after all, once been the toast of society.

Too restless to sit, she perused the titles on the shelves. The books must be for decoration only. A man who owned the premier gaming club in London could have no interest in the philosophy of Plato, the plays of Shakespeare, the intricacies of Euclidian geometry. Drake Wilder exploited the hopes of gullible gentlemen, nurturing their dreams of glory, then fleecing them of their wealth. He spared not a qualm for the disaster he caused to their families. Or the lives he shattered.

Anger stabbed Alicia, but she blunted it with the armor of reason. She must keep a calm, clear head. She must strike a hard bargain.

And if she failed? No. She would not allow herself to consider the possibility. The consequences were too dreadful.

As she paced the office, an alabaster statue on the marble mantelpiece caught her gaze. Slightly larger than her hand, the carving depicted a man and a woman locked in carnal embrace.

Alicia averted her eyes. But only for a moment. Curiosity proving stronger than prudery, she took the heavy piece into her hands. In the light of the fire, the sculpture seemed to glow with life. The man sat on a rock with the woman straddling him. The juncture of her opened legs pressed against his lower region. Her head was arched back as he nuzzled her breasts, and happiness lit her fine features.

The celebration of lust appalled Alicia. She told herself to put the statue back in its niche. Instead, she clung to it in morbid fascination, her wayward mind projecting her into the arms of a lover. Drake Wilder’s arms.

How could she do
this
with a stranger?

Sometimes, late at night and alone in bed, she would picture herself lying with an imaginary husband, his hands moving gently over her nightdress. She could almost feel the warmth of his body pressed to hers.…

How innocent was fantasy compared to stark reality. Never had she dreamed the act was accomplished without a stitch of clothing. That she would be expected to do more than lie on her back and allow him liberties. That she would have to behave like
this
with the scoundrel who had pushed her family to the brink of ruin—

The deep male voice sliced through her trance. She spun around, her gaze scouring the shadows. A door in the far corner stood ajar, and a man loomed there, his hand braced on the gilded panel. He had entered silently, stealthily. His black hair and swarthy coloring caused him to blend into the gloom. He wore the dark tailored coat and white cravat of a gentleman, yet there was something uncivilized about his tall, muscular form. Something that raised the fine hairs on her skin.

How long had he been watching her?

“That piece is rather old and priceless,” he went on. “It’s attributed to an apprentice of Michelangelo’s. But feel free to fondle it.”

Alicia realized she still clutched the indecent statue to her bosom. With unhurried hauteur, she set it back on the mantelpiece. “Do you always spy on your guests?”

“Only the female variety.”

His low chuckle disturbed the air. He watched her from beneath level black brows, taking his time studying her, his appraisal blatantly masculine. “You must be Lady Alicia Pemberton.”

“And you must be Mr. Drake Wilder.”

He inclined his head with the arrogance of a king, and she clenched her teeth to keep from raging at him. It wasn’t like her to speak sharply to a stranger. Especially one whose good favor she so desperately required.

Drake Wilder was bastard born, a cardsharp who had risen from the seething darkness of London’s underworld to become the richest, most notorious rogue in all of England. He had an aura of aggressive confidence, a face that showed hard lines of experience. He made her nervous, and she had never before been nervous around any man.

Strolling closer, he settled himself on the edge of the desk. He scooped up the dice and idly shook them, the ivory cubes rattling in his palm. All the while he kept his gaze on her. His eyes were a deep midnight-blue, riveting in their intensity. His scrutiny made Alicia uncomfortably aware of how vulnerable she was, alone with him in his dominion.

“Please sit down,” he said, waving his hand with lazy grace. “I’m surprised a lady would venture here without a chaperone.”

Unwilling to concede any advantage, Alicia remained standing. “You shouldn’t be surprised. I’ve come to discuss my brother’s debt.”

“So. The Earl of Brockway would send a woman to plead on his behalf.”

“Gerald doesn’t know I’m here.” In truth, her hotheaded brother would be livid. But she was acting for his benefit. And first, she must pursue the faint hope of finding an honorable solution.

Please, God, help me to convince this man.

She laced her gloved fingers together. “Mr. Wilder, perhaps you don’t realize my brother is only eighteen. As he has not yet reached his majority, he should never have been permitted to gamble at this establishment.”

“He is no longer a boy. Whether you admit so or not.”

“He is prone to youthful impulse,” she countered. “I should know. As his elder sister, I have been responsible for him all his life.”

Drake Wilder’s amused gaze flowed up and down her slender form. “Just how elderly are you?”

His heavy-lidded survey made her skin prickle again, and in a flash she saw herself unclothed, straddling him, his mouth on her breasts.…

“My age has nothing to do with this matter,” she said primly.

“It is indeed relevant. So answer me.”

Was it false pride that kept her from admitting she had been long on the shelf? Better to grant him this one concession. “If you must know, I am three and twenty.”

“Teetering on the brink of antiquity.”

His smile broadened, crinkling the corners of his eyes and creating attractive dimples on either side of that masculine mouth. A light-headed sensation nearly made Alicia sway on her feet. Humor relaxed the harshness of his expression so that he looked almost approachable.

As handsome as sin.