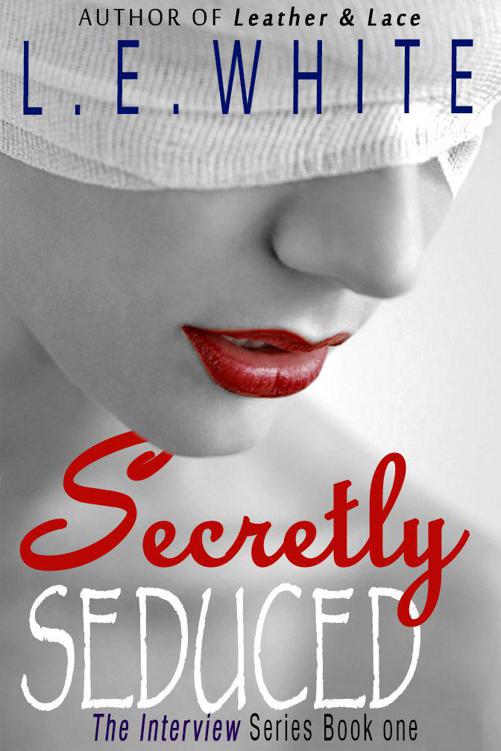 The Interview
Series Book One

This is a work of fiction. Names, characters, places
and incidents either are products of the author’s imagination or are used
fictitiously. Any resemblance to actual events or locales or persons, living or
dead, is entirely coincidental.

“Miss, are you all right?” called the
elderly woman standing by the driver side window of the BMW roadster.
They were looking down at a partially dressed female lying in the fully
reclined driver’s seat.

“Here, let me, Mabel,” said her
husband reaching past his wife to knock loudly on the car window using his dome
ring as a knocker. “Miss, wake up.”

Waking was accompanied by a wave of
nausea propelling Stacy to reach for the steering wheel to pull herself
upright.  She quickly opened the door, leaned over, and vomited on the
parking lot pavement.

“Maybe we better call the EMTs,
Frank.  Get away, Samantha,” said the woman jumping back to avoid the
splatter while jerking the dog’s leash to pull him way.

“No, don’t, I’m all right,” was all
Stacy could manage when she stopped retching long enough to speak.  After
her stomach emptied, Stacy used the door handle to climb back into the driver’s
seat.  She leaned her head on the steering wheel as her finger pressed the
Seat Memory button to raise her seat back.

“She must have been attacked.
I’ll call 911,” said Frank talking out his cell phone.

“No, I’m okay.  Nobody
attacked me,” said Stacy panicking for some unknown reason at the possibility
of the police being involved.

“You should button up, dear,” said
the woman.

Stacy looked down and realized her
blouse was completely unbuttoned and her brassiere was missing.  Her
breasts were exposed. Frank’s his cell phone camera was focused on her
nakedness.

“Stop it, Frank, you old
pervert.  She may need medical attention,” said Mabel.

Stacy turned the key and drove off
fighting another wave of nausea.  As she turned out of the parking lot,
she could see the interstate less than half-mile away.  Right before the
on ramp was a coffee shop.  Realizing there was no way, she could go
further until her stomach calmed down, Stacy drove into the drive through lane.

Moments later, Stacy was
parked, sipping a large black coffee wondering whether a bite of the plain
bagel she’d bought would calm her stomach or cause her to throw up again.
Stacy glanced at the dash clock, 11:42AM.

Jesus, it’s almost noon realized
Stacy as she flipped down the vanity mirror.  She grimaced at her image in
the mirror.  Then she ran a finger down the side of her cheek.  She
shook her head in disbelief at the thick coat of makeup she’d scraped away.

God I look like shit and feel
worse thought Stacy leaning close to the mirror to examine her blood shot
eyes.  “Think, girl, think,” she said aloud trying to recall how she wound
up in her car half dressed and missing her underwear.  Stacy took a small
bite of the bagel then leaned back in the seat struggling to clear her
mind.  The slight motion produced a twinge of pain from an unexpected
spot.  My pussy’s sore realized Stacy placing her hand between her legs
feeling her crotch.  My butt’s sore too.

In the distance, Stacy could see
the apartment complex and parking lot where the old couple woke her.
There were six identical buildings.  Then she recalled entering one of the
apartments last night with a police lieutenant.  His name was Mike
Cabreeze.  But Stacy couldn’t remember which apartment he had taken her
to.  They’d arrived in the dark and she had other things on her mind than
remembering an apartment number.  That was when it all started coming back
to her.

“Come with us, please,” said the
guard’s female partner stepping to the other side of Stacy bracketing her
between them.

“I haven’t done anything,” said
Stacy fighting the urge to panic.  No, she told herself. This can’t be
happening again.

“Right, but we need to have a
little talk.  Don’t make a fuss.  No need to upset the other
customers,” said the female guard.

Stacy glanced at their nametags,
Mark Wilson and Faye Sellers.

This just can’t be happening to me
repeated Stacy as they wound past racks of merchandise toward the back of the
department store.  My parents will kill me.  Mother will never speak
to me again.

“I haven’t shoplifted,” said
Stacy as soon as they passed through the door marked Security Office Employees
Only.

“We’ll see,” said Mark
dumping the contents of Stacy’s shopping bag on a table.  There were
several items including two spring tops Stacy had bought but there were two
smaller packages she didn’t remember purchasing.

“You got receipts for these?”
asked Faye picking up the two small bottles of expensive perfumes.

“No, I didn’t buy
those.  Someone must have put them in my bag,” said Stacy.  She had
no idea how the perfume got in her bag.

“Right, they just hopped off
the counter all on their own,” said Mark.  “Sit down, Miss, we got some
paperwork to do before we call the police.”

“No, please, I can pay.  But I
didn’t take them. Someone must have put them in my shopping bag,” repeated
Stacy struggling to maintain her composure.

“Stop the bullshit.  You’re
busted.  We know it isn’t your first time,” said Faye pointing toward the
computer monitor on her desk.  “It’s all there in the computer’s database
on shoplifters.  You and an accomplice were arrested at the Watertown Mall
last October 12th.”

“That was my dorm mate.  She
was shoplifting and I didn’t know it,” said Stacy surprised they already knew
she’d been arrested before.

“That isn’t what the judge ruled, $500
fine, one hundred hours community service, and three months probation.
You have violated probation.  Judge Myers won’t like that.  He’s a
real hard ass on probation violators,” said Mark

“I wasn’t guilty but my lawyer said
it was better to plead guilty to a misdemeanor and get it over with,” said
Stacy.

“$300 for an ounce, ridiculous,”
said Faye looking at the price tag on one of packages.

“More than $250 classifies you as a
felony shoplifter.  You better get a good lawyer, Miss, or you are going
inside,” said Mark.

“I hope you like girls.  Cause
a pretty young femme like you is going to munch a lot of rugs,” said
Faye.  “Come with me.  You know the drill.”

Unfortunately Stacy did know the
drill.  Two months ago she’d gone to a different mall with Jeanette, a
fellow student who lived in the same dorm.  Stacy didn’t really know
Jeanette well other than they had two classes together.  As they were
leaving the store, security had arrested them.  Unbeknownst to Stacy,
Jeanette had shoplifted something from practically every store in the
mall.  It amounted to over $700.  After their arrest, Jeanette had
dropped out of Harvard returning to her home in Colorado.  But Stacy, a
Massachusetts resident, was left to face a Cambridge judge with a strong
dislike for wealthy college students who broke the law.  She had avoided
incarceration for thirty days by pleading guilty to a misdemeanor.  She’d
completed the community service and was hopeful when her probation ended; her
arrest record would be expunged.

“Shirt,” asked Faye closing the
door behind them?

Stacy concentrated on unbuttoning
her blouse determined not to lose control and burst into tears.

“Bra?” asked Faye running her hand
down the shirt Stacy handed her.

“I didn’t have to take it off last
time,” said Stacy.

“It’s procedure in this
store.  Maybe you arrived braless. You took one of our bras to the
dressing room and put it on.  Wearing it out is common shoplifter
practice.  If I tell the police you didn’t allow us to search you
thoroughly, they’ll do it at the station and they will look in places I won’t,”
said Faye smiling.

“All right,” said Stacy
reaching back to unhook her bra.

“Nice,” said Faye examining
the label in the bra noting it was an upscale designer brand too expensive for
the department store.

Stacy resisted the urge to
cross her arms over her breasts.  Her mind was desperately searching for
an explanation for how the perfume had gotten in her shopping bag.  She
had browsed the perfume counter but hadn’t bought anything.

“Mom and Dad get you those
for your birthday?” asked Faye.

“No, they’re mine,” said
Stacy resisting the urge to tell Faye to mind her own fucking business.
Stacy’s breasts were large and had been the cause of unwelcome attention since
they started to appear in the seventh grade.

“Nice shape, what’s the word when
the nipple is turned up like yours?” asked Faye.

“Perky, please, can I get dressed?”
asked Stacy an angry tone creeping into her voice.

“Surely you don’t think I would
steal underpants?”

“Why not? It’s happened
before.  Some of the good ones cost twenty dollars and up.”

She must be a lesbian Stacy told
herself as she pushed her jeans down.  I’m going to find out whether they
do this to everyone.  I’ll sue if I’m being singled out.

Stacy stood quietly as the guard
emptied her jeans pockets on a nearby table.

“The rest, shoes too,” said Faye
tossing the jeans on the table.

“You’re sure you do this to
everyone,” asked Stacy?

Stacy had been searched twice down
to her underwear during her plane trip to Houston for the fall skeet competition.
She’d felt thoroughly humiliated by the experience.  Later, she’d read
young attractive females were frequent choices of airport screeners for
thorough searches.  While the TSA employee performing the search was a
woman, there was usually a hidden video camera.

“If you weren’t absolutely
gorgeous, they wouldn’t have chosen you,” had been her father’s unsympathetic
comment when Stacy had complained about being searched on both legs of her
flight.  “Beauty can be a curse for a young woman.  Men and even
women are attracted for the wrong reasons,” added Stacy’s mother.

“Yes, no exceptions, everyone down
to their socks, I search the girls and Mark the guys.  Hurry up or I’ll
miss my break.”

Stacy considered refusing then
decided that would end any chances she might have of convincing them she was
innocent.  Stacy slipped off her loafers as she pushed her panty down and
stepped out of them.

I am not going to let her
intimidate me decided Stacy as she straightened up.  I’ll look her
straight in the eye and dare her to do anything inappropriate.

“Stand erect.  Spread your
feet hip distance apart.  Hold yours arms straight out and turn slowly
around,” said Faye tossing Stacy’s panty on the table after examining the
label.

Stacy stifled her feelings of shame
and humiliation and did as she was instructed.  She was too upset to
notice the video camera hidden in a bookcase.

“Get dressed,” said Faye once Stacy
had gone full circle.

The Alpha Takes a Mate by Sam Crescent
Two if by Sea by Marie Carnay
Accused: A Rosato & Associates Novel by Scottoline, Lisa
Forty Rooms by Olga Grushin
Loving Two Doms (Club El Diablo) by Roberts, Holly S.
Destine (The Watcher's Trilogy) by Polillo, Katherine
A Dress to Die For by Christine Demaio-Rice
The Visitors by Katy Newton Naas
Wicked Cravings by Suzanne Wright
The Consequence of Secrets - Part Two: A Priest Romance by Cates, Eve