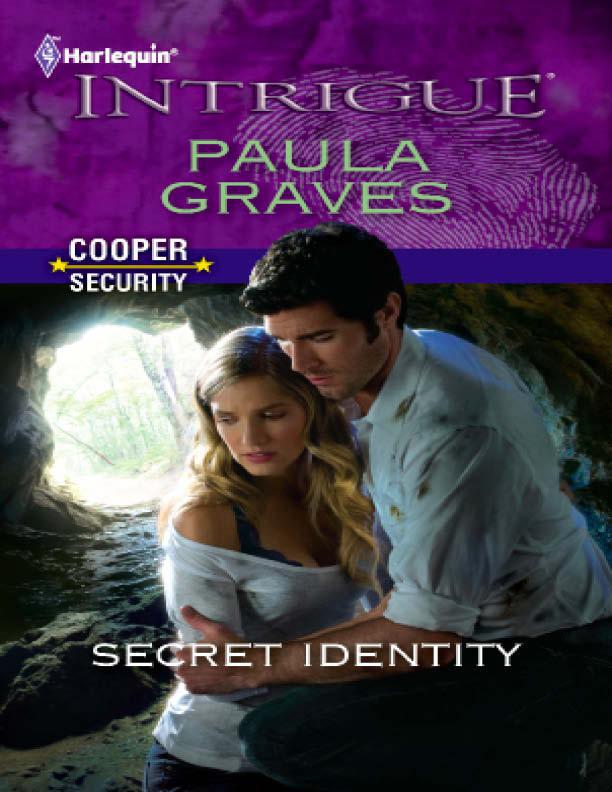 She had an identity to protect. He had to make sure it wasn’t exposed.

Since leaving the CIA under questionable circumstances, Amanda Caldwell has been living a quiet, uneventful life in a sleepy mountain town. But when Rick Cooper, her former partner—and former lover—makes an unexpected reappearance, she senses things are about to get a lot more interesting....

Rick’s mission is to protect Amanda and her identity from an assassin who’s picked up her trail. It isn’t long before working together stirs up all the passion and energy they’d once shared on the job. And in Rick’s bed. Still, there’s more to Rick’s assignment than he can share with his “partner.” Revealing the truth wouldn’t be smart. But keeping his secret could be deadly.

“Maybe I should check to see if someone’s outside.” She sat up on her knees, preparing to stand.

“Where are you going?” He caught her arm, holding her in place. She bit back a soft gasp as his fingers tightened on a sore place on her arm. Had she injured herself during her mad dash through the woods?

His fingers loosened and fell away. “Did I hurt you?”

“No,” she said, but the burning in her arm hadn’t subsided. She lifted her fingers, pressing the sore area. She felt a rip in her jacket and a sticky wetness. “I think I cut myself—”

She heard a rustling noise, then a snick. Light cut through the gloom, making her squint.

“Let me see.” Rick pointed his flashlight at her arm.

Looking down, she saw a ragged furrow in the arm of her olive-drab jacket, just above the elbow. The edges were singed and damp with drying blood. She knew exactly what it was, even before Rick spoke.

Alabama native Paula Graves wrote her first book, a mystery starring herself and her neighborhood friends, at the age of six. A voracious reader, Paula loves books that pair tantalizing mystery with compelling romance. When she’s not reading or writing, she works as a creative director for a Birmingham advertising agency and spends time with her family and friends. She is a member of Southern Magic Romance Writers, Heart of Dixie Romance Writers and Romance Writers of America.

Amanda Caldwell—
After suffering torture at the hands of a brutal injury, the former CIA agent has gone into hiding. But a ruthless foe has found her, and she’s forced to put her life in the hands of a man she never thought she’d see again.

Rick Cooper—
The former security contractor knew the consequences of falling for a spy, but that hadn’t made walking away from her any easier. Now his lover is in danger, and he’s willing to risk his life to save her. But is he willing to risk his heart?

Alexander Quinn—
The CIA master spy was instrumental in tearing Rick and Amanda apart three years ago. Why is he working so hard to bring them back together?

Jesse Cooper—
Rick’s brother owns a security agency and hired his brother after Rick’s former employer, MacLear, collapsed under the weight of an international scandal. But does he have an ulterior motive for helping Rick protect Amanda?

The Tiger—
The man who tortured Amanda during her spy days has never been identified, much less captured. Is he behind the attempts on her life?

Security Services Unit (SSU)—
MacLear Security’s secret unit scattered after allegations that the unit acted as a private army for a corrupt State Department official. But are some of the agents still selling their services to the highest bidder?

Damon North—
An undercover agent who’d once infiltrated the SSU, he’s been trying to work his way back into their trust. How far is he willing to go—and who is he willing to risk—to get what he wants?

Maddox Heller—
The wealthy former marine seems to be working his own angle in his attempts to help Amanda. Can she and Rick trust his motives?

For my wonderful editor, Allison.
Thank you for your invaluable input and your belief in me. I hope I live up to it.

Gazing across the bleak gray waters of the Tidal Basin at the Jefferson Memorial, Barton Reid tugged the lapels of his coat up to cover his exposed neck. Snow fell in halfhearted showers that mostly melted as they hit the concrete walkway extending along the bank to accommodate the tourists.

Strange to think in a few short weeks, the cherry blossoms would be in bloom. And if he played his cards right, he’d be here to watch them bloom for years to come.

Footsteps thudded toward him, too swift and determined to be a tourist’s. He didn’t turn right away. He didn’t want to look desperate. Play it cool. Stay in control. That’s how a kid from the streets of Philly had made it into the highest echelon at the Department of State. It would take those skills, and every favor he could call in, to stay out of prison.

The footsteps slowed to a stop a few feet from him. Only then did he glance down the railing to see the stocky, dark-haired man he’d contacted a day earlier.

“You’re taking a chance calling me here.” Salvatore Beckett had changed his look in the past couple of years, letting his dark hair grow out until it curled around the collar of his turtleneck sweater. He’d bulked up, and the definition of his muscles was obvious even through the layers of clothing he wore to ward off the mid-March cold snap.

“You know they’re looking for you, yet here you are.”

“I was led to understand there was a great deal of money involved.”

“There is. And a favor to an old associate who may be in a position to help us in the future.” He waited for Beckett to ask the obvious question, but the man just shrugged.

“You’ll pay what was offered?”

“Absolutely.” More accurately, his associate would come up with the exorbitant fee. Reid was merely a middleman.

“Anybody sees you with me, it’s going to blow your defense.”

Reid didn’t have to be reminded of that troubling fact. But he had to weigh the potential for discovery against the certainty that his associate meant every word of his threat. He would connect Reid to the uprising in Kaziristan in a way that could put him in prison for the rest of his life, if he wasn’t executed for treason first.

“Then let’s waste no more time,” Reid said aloud. “How do you feel about a trip to Tennessee?”

“Is it warmer than here?”

“I have them.” Beckett’s voice rang with confidence.

“Then here are your orders.” Reid reached into the inner pocket of his coat and handed Beckett a single sheet of paper. On it were terse instructions for carrying out the job he’d just agreed to do.

Beckett’s eyebrows rose slightly. “I play this my way?”

“Get it done, and you can play it any way you want.”

Reid turned his gaze back to the water. Along the path from the Jefferson Memorial, a young woman approached, her dark hair whipped by the icy wind into a silken halo. One hand was wrapped firmly around the hand of a little girl of three, who was laughing happily as she gazed up at the falling snow.

“I’ll be in touch.” Beckett turned and walked slowly away.

Reid watched Meredith’s approach, saw her smile as she spotted him across the distance. Anyone watching would assume he’d been waiting here for his daughter and his granddaughter.

It was mostly true.

Adrianna spotted him as they neared. Her face spread in a smile of delight that made Reid’s heart crack and bleed. “Papi! Papi!” She tugged hard at her mother’s hand, and Meredith let her go. Adrianna’s chubby little legs churned as they ate up the distance between her and her grandfather.

He caught the little girl as she flew at him and lifted her high in the air, delighting in her giggles.

“Hello, Addie my love!” He kissed her cold cheeks and smiled at his daughter as she approached at a more leisurely pace. She was still smiling at him, but he could see the worry in her green eyes.

His life was still in flux, and unless Salvatore Beckett and his friends were able to accomplish the task he’d given them, his life was about to get more complicated still.

The Last Punisher: A SEAL Team THREE Sniper's True Account of the Battle of Ramadi by Lacz, Kevin, Rocke, Ethan E., Lacz, Lindsey
Rooster: A Secret Baby Sports Romance by Abbey Foxx
Quiet Neighbors by Catriona McPherson
Mark of Caine Trilogy: Book One: Hidden in the Shadows (Victorian Villains) by Catherine Lloyd
Elisha Barber: Book One Of The Dark Apostle by E.C. Ambrose
No me iré sin decirte adónde voy by Laurent Gounelle
Return of the Assassin (All the King's Men) by Lynne, Donya
Revealing the Real Dr. Robinson by Dianne Drake
Destroy by Jason Myers
Beauty: A Novel by Frederick Dillen