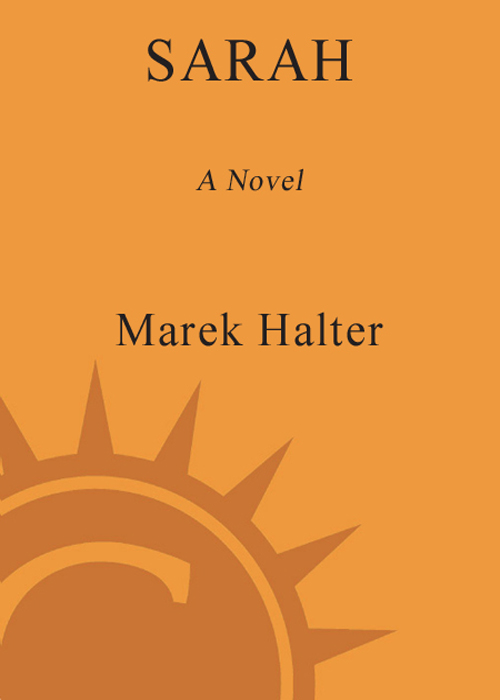 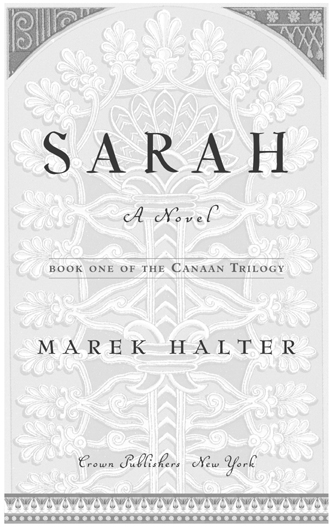 CROWN is a trademark and the Crown colophon is a registered trademark of Random House, Inc.

Map of the Journey of Abraham and Sarah

The Herb of Infertility

Part Two THE TEMPLE OF ISHTAR

The Shawl of Life

A Child of Drought

Therefore a man leaves his father and his mother and cleaves to his wife, and they become one flesh.

If a man is a river, a woman is the bridge.

Frailty, thy name is woman!

W
ho is this that looks forth like the dawn,
fair as the moon,
bright as the sun,
terrible as an army with banners? 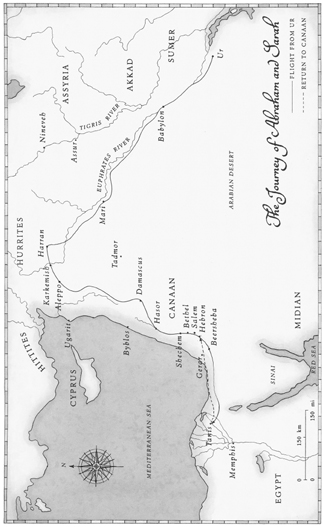 Twice during the night, my chest stopped filling with air. Twice, it was empty, and as dry as a leather goatskin. Although my mouth was wide open to the dawn wind, I could not drink it in. I lifted my shaking hands in the darkness. Pain ran through my bones, greedy as vermin.

And then it stopped. Twice, the air returned to my lips, flowing over my tongue as cool and sweet as milk.

It's a sign. I know how to recognize the signs. After so many years, so many trials and tribulations, Yhwh, the invisible god, is going to separate Sarah from Abraham. Tonight, tomorrow night, very soon. He will take my life.

That's the way things are. That's the way they must come to pass. There's no point protesting, no point being afraid. Yhwh will mark out my route away from this land that still bears my steps. An old woman's steps, so light the grass hardly bends beneath my weight.

That's the way things are, the way they're meant to be. The next time the air refuses to come into my mouth, I won't be so scared.

This morning, as dawn was spreading over the meadows and dusty cliffs around Hebron, I left the mothers' tent, but instead of going to wait outside Abraham's tent with bread and fruit, as I've done thousands of times since he became my husband, I came here, to the hill of Qiryat-Arba, and sat down on a stone at the mouth of the cave of Makhpela. It took me a while to climb the hill. But I don't care how hard it is. If Yhwh decides to take my breath from me in broad daylight, this is where I want my body to collapse, here, in this garden, in front of this cave.

This place fills me with peace and joy. A white cliff surrounds the mouth of the cave like a well-constructed wall. From beneath the shade of a huge poplar, a spring runs down into a vast semicircular garden. Its slope, like a palm open in greeting, descends toward the plain, marked with long low walls built by the shepherds, planted with thick trees, and fragrant with sage and rosemary.

From here, I can see our tents drawn close around Abraham's black-and-white tent. There are too many to count. Hundreds, I suppose. The sheep stretch as far as the eye can see, their wool brilliant white against the grass, which is greener than the water of a pool. It's the end of spring. The rains were mild and came at the right time. I can also see the smoke rising vertically from the fires, which is a sign that the east wind, heavy with sand and dryness, will spare us again today. Even from up here, I can hear horns, dogs barking as they gather the sheep, occasionally the cries of children. My hearing is no weaker than my sight. Sarah's body still holds out!

Youth knows nothing of time, old age knows nothing but time. When you're young, you play hide-and-seek with the shade. When you're old, you seek out the warmth of the sun. But the shade is always there, while the sun is fleeting. It rises, crosses the sky, and disappears, and we wait impatiently for its return. These days, I love time as much as I love Isaac, the son I waited so long to see.

For a long time, the cycle of seasons left no trace on me. One day followed another, and my body showed no sign of them. That lasted many years. My name wasn't yet Sarah, but Sarai. They said I was the most beautiful of women. My beauty was a beauty that inspired as much fear as desire. A beauty that seduced Abram as soon as he set eyes on me. A beauty that never faded, troubling and doomed, like a flower that would never bear fruit. Not a day went by that I didn't curse this beauty that wouldn't leave me.

Until Yhwh at last wiped out the terrible act that was the cause of everything. A sin I committed as an innocent child, for love for the man who was then called Abram. A sin, or a word I wasn't able to hear, for we knew so little then.

The sun is high now. Through the fine needles of the cedars and the dancing leaves of the great poplar, it warms my old body. I'm so thin now, I could wrap myself in my long hair, which has never turned white. Such a little body, but one that harbors so many memories! So many images, scents, caresses, faces, emotions, and words that I could populate the whole land of Canaan with them.

I love this place. Here, the memories gush from me like a waterfall cascading into a river. The cool air from inside the cave brushes my neck and my cheek with the tenderness of a familiar whisper. At moments it seems to me it's my own breath, the breath that Yhwh withheld from me last night.

In truth, this place is a nail in the pillar of time, like the pottery nails used to mark the presence of the souls in the splendid walls of my city, Ur.

Two nights ago I received another sign from Yhwh. I had a dream with my eyes wide open. I was still breathing peacefully, but my body was stiff and cold. In the darkness of the tent, without even the moonlight filtering through the canvas, I suddenly heard the banging of metal tools on stone and the voices of men at work. I wondered what kind of work they could be doing in the middle of the night, so close to the mothers' tent. I wanted to get up and look. But before I could lift myself up on my elbow, I saw. I saw with my eyes what only the spirit of dreams can make us see.

It was no longer night but day. The sun shone down on the white cliff and the mouth of the cave of Makhpela. That was where men had been working since the first light of dawn, building walls, thick, solid walls. A beautiful facade, complete with door and windows. A house of stone as splendid as any palace in Ur, Eridu, or Nippur. A dwelling I recognized immediately.

They were building our tomb.

The tomb of Abraham and his wife, Sarah.

I shall be the first to take my place in it. My beloved Abraham will lay my body there so that at last I can attain the peace of the other world.

My dream faded. The blows of hammer on stone ceased. I opened my eyes. The tent was dark, and Rachel and Lesha were sleeping beside me, breathing peacefully.

But the meaning of the dream remained with me. All of us to whom Abraham's invisible god revealed Himself, this now numerous people to whom He offered His covenant for all eternity, we know only cities of tents, cities of desert and wind and wandering. Yet I, Sarah, was born in a house with thirty rooms, in a city that contained a hundred similar houses, its most beautiful temple as high as the hill of Qiryat-Arba, its outer walls thicker than an ox.

In my whole life, following Abraham into the mountains where the Euphrates rises, walking beside him in search of the land of Canaan, or even as far as Egypt, I have never seen a city as splendid as the Ur I knew as a child. And I have never forgotten it.

Nor have I forgotten what I was taught there: that the strength of the people of Sumer and Akkad lies in the beauty of their cities, the solidity of their walls, the perfection of their irrigation systems, the magnificence of their gardens.

So, when day had broken, I went to see Abraham. While he ate, I told him what I had seen in my dream.

“It's time for our people to build walls, houses, and cities,” I said. “Time for us to take root in this land. Remember how we loved the walls of Salem. How dazzled we were by Pharaoh's palaces. But in this camp, the camp of the great king Abraham, the man who hears the word of Yhwh and is heard by Him, the women still weave canvas for tents as they did when your father Terah's clan camped beneath the walls of Ur, in the space reserved for the
mar. Tu,
the men with no city.”

Abraham listened, never taking his eyes off me. “I know you've always missed the walls of your city,” he said, smiling, and his beard quivered.

He took my fingers in his, and for a long moment we remained still. Two old bodies linked by our hands and by the thousands of tender words we no longer need to speak.

At last, I said what I had been wanting to say since my dream had faded. “When I've stopped breathing, I want you to bury me in the cave of Makhpela, on the hill of Qiryat-Arba. The gardens around it are the most beautiful I've seen since the gardens of my father's palace. They belong to a Hittite named Ephron. Buy them from him; I know he won't refuse. Once you've buried me, bring masons from Salem or Beersheba. If they're as skillful as Pharaoh's masons, so much the better. Ask them to build walls at the mouth of the cave, the most beautiful, most solid walls they can build, for the tomb of Abraham and Sarah. It will be our people's first house, a place for them to gather, in all their great number, happy and confident. Isaac and Ishmael will be with them. The two of them together. Isn't it up to us, with the help of Yhwh, to ensure the future?”

Abraham had no need to promise me he would carry out my wishes. I know he will, for he always has.

Now, I can wait in peace for my breath to leave me. Wait and remember. There is no wind and yet, above me, the leaves of the poplar tremble, filling the air with a noise like rain. Under the cedars and acacias, the light dances in patches of molten gold. A fragrance of lily and mint comes to rest on my lips. Swallows play and sing above the cliff. Just like that day. The day the blood flowed for the first time between my thighs. The day the long life of Sarai, daughter of Ichbi Sum-Usur, daughter of Taram, began.