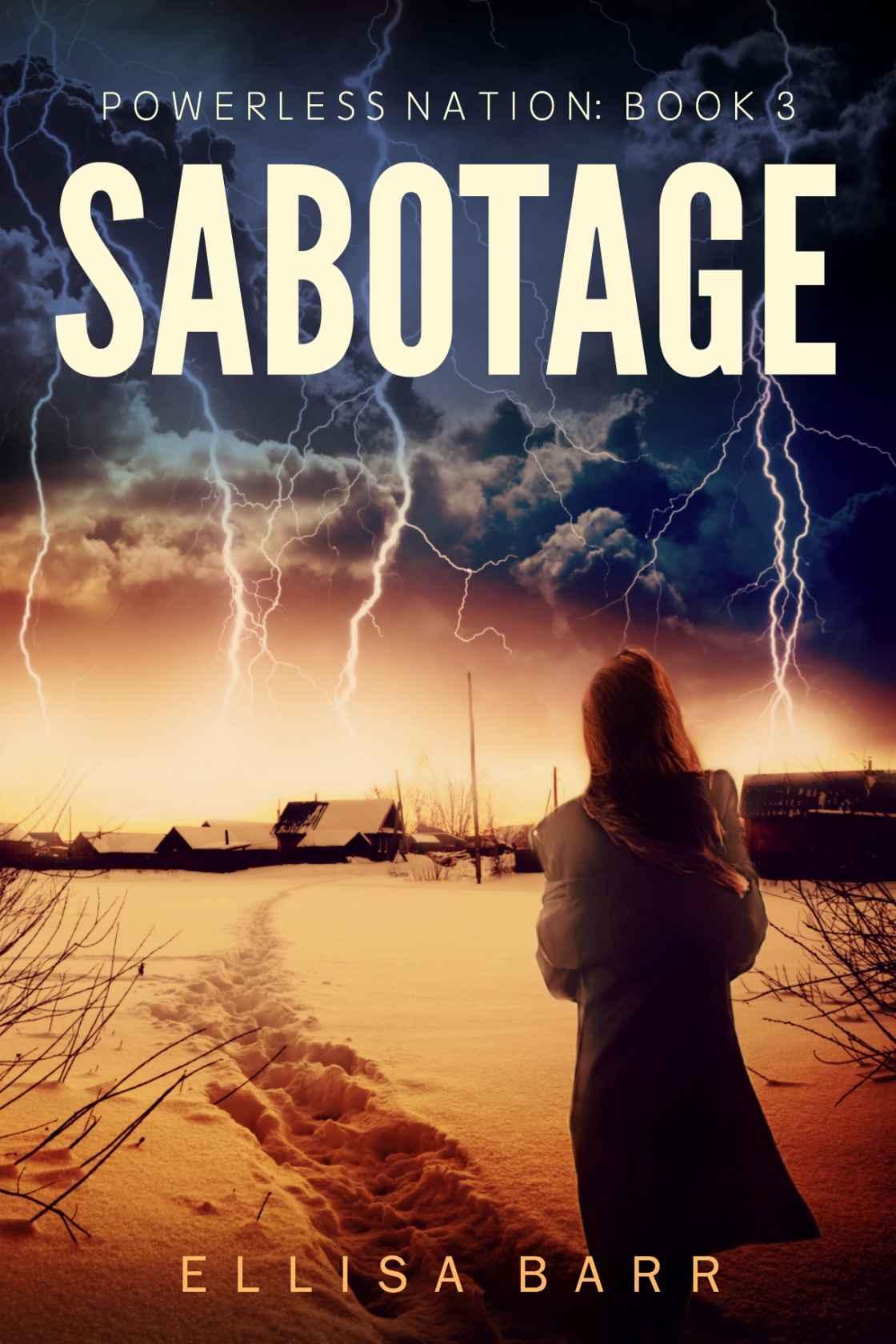 To my kids, my nieces and nephews, and to all young people around the world that stand up for what’s right and good:

You amaze and inspire me.

“Behold I say unto you, that by small and simple things are great things brought to pass…”

D
EE
STORMED
OUT
OF
the house and let the door slam behind her. Her parents had been back less than a week and they were already trying to ruin her life, especially her dad. He clearly had no idea how much Dee had been through in the past seven months.

Ever since the EMP the previous summer, they’d had nothing Dee once considered necessary for life. No hair dryer, internet, trips to the mall. Eight months without a cell phone!

Society had crumbled, even in the rural part of Washington where she lived with her grandpa. It had only been a few weeks since a homicidal sheriff had kidnapped her boyfriend Mason’s little brother, and they’d had to fight to get him back.

Her parents hadn’t been there for any of it. They’d gone off on a cruise to Alaska right before the whole thing started. Dee had often wished they were there to take over when things got bad, but now that they were here, she wished—

No, she didn’t wish they were gone. She wanted them to respect her.

Dee kicked the barn door and winced when her boot met solid wood. The pain didn’t do anything for her bad mood, and she yelled at the chickens.

“Stay out of my way or you’re going in the soup pot!”

Ignoring the threat, they surrounded her, watching her from the corners of their eyes with heads tilted sideways.

Dee reached into a burlap bag for a handful of dried corn. “Whatever. No one
else
listens to me either.” She tucked the chicken feed into her pocket and climbed the ladder to the hayloft where she sat on the edge and let her legs dangle over the open space. She tossed a kernel of corn over the side and watched the chickens squawk and peck below, crowding each other out of the way to get it.

“You in here, Dee?” Hyrum walked into the barn and spotted her up in the hayloft. “I knew it. Mind if I come up?”

Dee shrugged. Her friend wasn’t exactly on her good list after taking her parents’ side.

He climbed the ladder, his blond hair glinting in the sun like straw, barely favoring his wounded leg. He’d been grazed by a bullet weeks earlier in a conflict with the corrupt police force in the nearby town of Lookout Falls.

She waited for Hyrum to say something so she could contradict him, but he only held out a hand for corn and sat in silence, dropping kernels to the ground below.

Finally Dee asked, “Did my mom send you out here to change my mind? It won’t work.”

“Nobody sent me. I just thought you might want to talk.”

“What’s there to talk about? I think my parents are making a huge mistake but no one cares what I think.”

Hyrum sighed. “I didn’t come out here to fight, Dee.”

“Then why are you here?” Dee heard the sharpness in her tone, but didn’t apologize.

She ignored his attempt at humor. “I know you think I’m wrong.”

“It doesn’t matter what I think. Whether I like it or not, your parents and your grandpa are going to live in town for the rest of the winter, and you’ve got to go with them.”

“Maybe it’s not fair to you, but the town needs your grandpa. He’s the only doctor around.”

“You know what I mean,” said Hyrum. “He’s all we’ve got. If you keep him out here you could be costing people their lives.”

“What do you mean if
I
keep him out here? He’s a grown man. It’s his decision.” Dee picked up a piece of straw and fidgeted with it.

“You know he wants you to be happy,” Hyrum said. “You should stop trying to make him feel bad about it. You won’t even be gone that long. It’s only until spring planting and then you’ll all be back home.”

Dee knew Hyrum was right. She and her grandpa had been through hard times together and there was no way she would let him move to town without her.

“Hey, there’s one good thing about you living in town,” said Hyrum, and Dee heard the smile in his voice.

“You won’t have to cook for us anymore.” Hyrum ducked.

Dee threw a handful of straw at him. “I’m a good cook!”

“Sure you are,” said Hyrum, picking straw out of his hair.

“Just for that I’m going to treat you to one last meal of Mystery Hash.”

Hyrum groaned. “Maybe when they taste it, your folks will change their minds and leave you here.”

“Good idea! I’d better go get started on it.” Hyrum smiled at her and she realized he’d managed to cheer her up. How did he always do that?

As they climbed down the ladder and headed for the house, Dee wished she could freeze time and they could all stay together, safe and happy. Wishful thinking, she knew. If only she didn’t have such a bad feeling about splitting up the families.

Mason stopped them as they crossed the yard. “Hey you two.”

Dee’s heart fluttered at the sound of her boyfriend’s voice. He touched her hair and grinned at her. “What’s this?” he asked, eyebrows raised.

Mason handed her a piece of straw. “I thought a roll in the hay was something they said in movies.”

“Hyrum was trying to cheer me—

Mason plucked another straw out of Dee’s hair before touching a finger to her lips. “I’m glad you’re not upset anymore,” he said. “I want your last night at home to be special.”

“She’s cooking tonight,” said Hyrum. “So at least it will be memorable.”

Mason turned to Hyrum, “That reminds me, do you have a second?”

Dee left the two of them whispering while she went in to help Hyrum’s mom, Angela, with the cooking.

Dinner that night was a thick, comforting chili made from beans Dee had bought in town on the day of the EMP eight months ago, and dried chili peppers they’d harvested from Grandpa’s garden. It was surprisingly easy to reconstitute the chilies and roast them to make a spicy seasoning base for the hearty meal.

Dee made the chili and Angela made the cornbread. Baking in the wood-burning stove was beyond Dee’s skill, though she was getting better at cooking in the solar oven, even on cold winter days.

“Do you think the chili’s safe to eat?” asked Kade. Kade was one of two teens her parents had brought back with them from the cruise ship. It hadn’t taken long for Kade to join in on teasing Dee about her cooking, even though by the time he arrived her meals had been upgraded to edible, for the most part.

There hadn’t been a food shipment to the local grocery store in over six months, and picky eating was a luxury they couldn’t afford, so the families had suffered through more than a couple of Dee’s failed attempts at cooking.

Hyrum shook his head. “Better not risk it. Hand me your plate, I’ll take one for the team.”

“Don’t believe him, Kade,” Angela said with a knowing smile. “I’m sure Dee’s chili will be great. It smells heavenly.”

Grandpa cleared his throat and everyone turned to look at him. “It warms my heart to have so many friends and family here at our hearth today.” He smiled around at everyone before bowing his head to say grace. “May God bless this food, and bless this family ’til we meet again safely here once more. Amen.”

After the amens, everyone dug into the food. They only ate two meals each day now, and although they weren’t starving, hunger was still an almost constant companion. It had been necessary to cut out a meal when Dee’s parents had arrived with Kade and Sena. Better to tighten their belts now than run out of food before spring, when they all hoped the chickens and cows would start producing again.

She looked around the crowded table and wondered what the future held for them all. Sena dabbed at her eyes and Dee wondered if she was sorry to be leaving too. Her mom had said that Sena would move to town with them, and Kade would stay at the farm to help out. Kade’s face was red, and Dee wondered if there was anything between Kade and Sena.

Dee took several bites of chili and realized her mouth was tingling and slightly numb. She glanced at her mom, who was gulping down a tall glass of water, and then at her dad, manfully powering through his chili while wiping tears from streaming eyes. “This is good stuff, hon,” he managed, when he caught her looking at him.

Dee looked around the table and started to giggle. Almost everyone was struggling to eat the fiery meal.

Angela poured precious milk into glasses for the younger children to counteract the spicy chili and Jeremiah fanned his mouth vigorously, eyeing the milk. “Nice try, dude,” said Hyrum, grinning at his younger brother. “The milk is for little kids, not strapping thirteen-year-olds like you. You’ll have to tough it out with the rest of us men.”

Jeremiah sat up straight and puffed out his chest, his eyes lingering wistfully on the milk. Angela broke off some of her cornbread and handed it to him. “I don’t think I can finish my share tonight.”

He popped it in his mouth with a muffled, “Thanks, Mom!”

“It wasn’t that hot earlier,” Dee said in her own defense. “I swear.”

“Dinner definitely won’t be as exciting for the next couple of months,” said Mason. He nudged Dee’s leg with his own under the table and a warm tingling spread through her body that had nothing to do with the chili.

She glanced at Mason. He ate his dinner casually, seemingly unaware of the effect his nearness had on her. His lean hands were perpetually grease-stained from working to repair and restore old machinery on the farm, and he used one now to push overly long bangs out of his dark eyes. He hadn’t had a haircut since before she’d met him.

“Did you tell her about the surprise yet?” asked Sammy.

Mason pointed at Sammy and gave him a warning look. “You had better zip it.”

Sammy mimed zipping his lips closed, then spoke in a garbled voice. “How’m I s’posed to eat with my mouth shut?”

Mason rolled his eyes good-naturedly at his little brother, then turned to Dee. “If you have some time after dinner, there’s something I want to show you.”

“You’re gonna love it!” shouted Sammy in a voice muffled by his mouthful of cornbread.

Mason put an arm around his brother and covered his mouth with his hand. “I knew I shouldn’t have told him.”

Dee looked to where her dad scowled down into his chili. He still wasn’t used to the idea of his daughter having a boyfriend, let alone a boyfriend who’d come to live under the same roof with them after his mom died.

“I’m all packed for tomorrow,” said Dee. “I have time tonight.” She wondered what the surprise was. From the excitement in Sammy’s eyes, it was going to be a good one.

After Mason and Dee finished the last of the dishes he said, “It’s time! Close your eyes.”