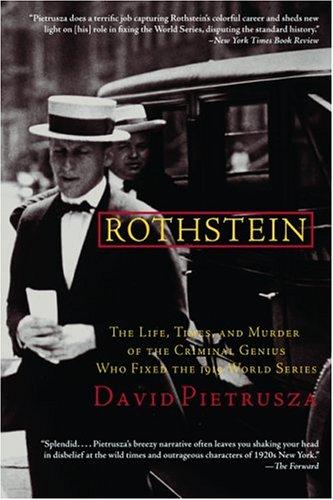 Teddy Ballgame: My Life in Pictures (with Ted Williams)

Judge and jury: The Life and Times of Judge Kenesaw Mountain Landis

Lights On! The Wild Century-Long Saga of Night Baseball

Minor Miracles: The Legend and Lure of Minor League Baseball

To Cathy Karp Who I look up to.

The Players in Our Drama-ix

Featherweight champion of the world. A.R.‘s gambling buddy and bodyguard-as well as his indiscreet henchman in fixing the 1919 World Series.

Crooked and brutal police vice squad chief. His downfall paves the way for Rothstein to begin his career as the great middleman between the machine, the mob, and the cops.

The Kid conjured up the idea of fixing a World Series. Too bad he didn’t live to enjoy it.

Broadway’s “Funny Lady” found husband Nicky Arnstein’s illegal schemes with A.R. no laughing matter, nor the collateral he demanded to provide bail for her incarcerated spouse.

New York’s most vicious labor-union racketeer got his start with A.R. He got the chair from District Attorney Tom Dewey.

A.R. fixed it for Burns and his partner Billy Maharg to take the fall if anything went wrong in fixing the 1919 World Series. It did.

A.R.‘s last attorney and the thief at his deathbed.

Broadway’s “Yankee Doodle Dandy” knew when to bet and when not to bet on a World Series.

The bestselling author (The Red Badge of Courage) who risked his reputation, his physical safety, and his friendship with Theodore Roosevelt to expose police corruption in 1890s New York.

He drifted in from California, tried to rob A.R. at gunpoint, made A.R. a fortune in horseracing tips, and departed just as mysteriously as he arrived.

Heavyweight champion of the world in the Golden Age of Sports. Did A.R. plot to cheat him of his crown?

The attorney general’s alcoholic son on the Big Bankroll’s payroll.

The original dim-witted but brutal East Side hoodlum. When A.R. wanted a loan repaid, he used the thuggish Eastman to collect.

A.R.‘s partner in Saratoga and Long Island gambling houses; his underling in fixing a World Series.

The Roaring 20s most flamboyant and successful criminaldefense attorney. Rothstein and Fallon did a lot of business together, but that didn’t keep the duo from profoundly despising one another.

The hotel chambermaid who knew too much. A spell in jail eventually made her forget much.

New York’s irascible reform mayor. He battled Tammany, took a bullet in the head, and did his best to “preserve outward order and decency. “

He managed boxing champions Gene Tunney and Benny Leonard and made sure he remained on Arnold Rothstein’s good side.

A.R. bankrolled Gordon ‘s bootlegging operations, but only if Waxey did it Arnold’s much more profitable way.

The controversial press lord who tried to break Tammany. Instead, he found his own private life on the front page.

An honest cop. He dared question why A.R. got away with shooting three other cops.

Tammany’s powerful and wealthy boss of West Harlem. He netted a fortune from Prohibition and the numbers racket and spent a good part of it covering up the facts of A.R.‘s slaying.

Jimmy Walker’s obtuse and Hearst-controlled predecessor at City Hall. He battled Rothstein, but to no avail.

He thought Arnold would never go to the cops after he robbed A.R.‘s highstakes poker game. He guessed wrong.

The most powerful man in baseball thought he had a deal with the man who fixed the World Series. You can’t cheat an honest man.

The murdered Follies showgirl. She was A.R.‘s tenant. Was she one of his drug runners?

Majority leader of the New York State Assembly. Wily defense attorney and fixer in the Rosenthal murder case. He graduated to the bench and to protecting A.R.-connected gambling clubs.

Gangsters, entertainers, newspaper people all made his Times Square restaurant their unofficial headquarters. But no more than did Arnold Rothstein.

A.R. picked this cheap little hoodlum off the streets and turned him into an elegant, rich hoodlum.

Rothstein recognized “Little Man “‘s talents and helped make him into the next Rothstein.

Tammany Hall’s savviest, most powerful, and resilient boss. He relied on Rothstein to deal with Gotham’s emerging mob.

The federal drug czar with a secret to hide.

The swarthy West Coast gambler who took A.R. for $300,000 in a single card game, but never collected.

Inventor of the racing tip sheet. Pioneer stock swindler. Even he could learn a lot from Arnold Rothstein.

Boxing’s greatest promoter and a man who sensed the great Rothstein ‘s demise was just around the corner.

The filthy street urchin whom A.R. tried to befriend, but failed.

His skillful handling of the scandals that followed A.R.‘s murder helped lead FDR from the governor’s mansion to the White House.

A fatally indiscreet Times Square gambler. Being Rothstein’s friend couldn’t save him from being rubbed out.

The rags-to-riches construction magnate whom even A.R. feared at the gambling table.

Arnold’s jealousy of his older brother helped propel him into rebellion and a life in the underworld.

Fabled chronicler of Arnold Rothstein’s Broadway, author of Guys and Dolls. He shared whispers with A.R. just before Rothstein walked up Broadway to his violent end.

Night cashier at Lindy’s. He took the call that summoned A.R. to his death.

The patrician politician who brought down Rothstein’s pals in Tammany Hall.

Drug addict. Petty criminal. And one of A.R.‘s closest friends.

Highstakes gambler. Owner of the New York Giants. He depended on A.R. to protect his crooked Wall Street operations from the law.

The Boston bookmaker who helped A.R. pay off the 1919 Black Sox.