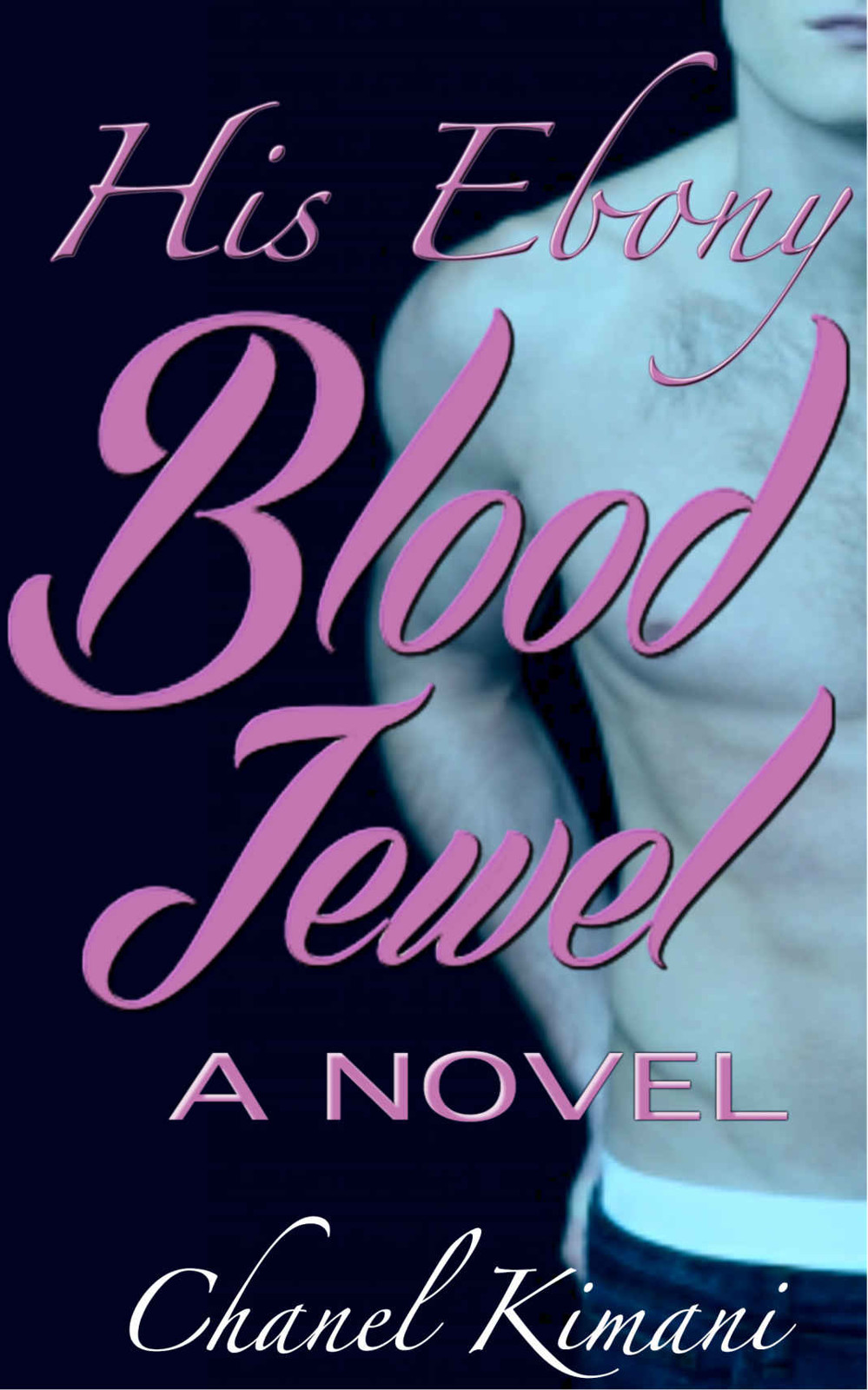 His Ebony Blood Jewel: A Novel

“
Girl
, you ready for that party?” Ashanti said, putting on her deep mauve Mac lipstick in the mirror as Harper played with the strand of pearls around her neck. They were in the dressing room of Harper's luxury condo in one of the city's most exclusive buildings.

Lola, one of their dearest friends, was having her album release party that night. And as part of the “Realest Diva's Squad,” they were going to be there to support her.

The Realest Divas were a group of strong, independent women who had been through it all – together. The tears, the celebrations, the heartaches, the betrayals, and even the mundane. But through it all, through all those things that life threw at them, they were able to make it through. Together. In one piece.

Harper sighed, sitting down on the chaise lounge and crossing her legs. She was wearing a beautiful Pucci gown in shades of lavender and pink. Her jet black Indian Remy hair was pulled back in an elegant chignon. She had been ready for hours. She always did things ahead of time – she had picked her outfit out two weeks ago, knew exactly how she was going to wear her hair, down to what undergarments she was going to rock. Not that anyone was going to see
that
tonight.

“I am. You know I'm going to be there for Lola. But I'm just so tired.” Harper lied. She was also a little peeved that her friend was still in the “getting ready” stage. If they didn't leave soon, they were definitely going to be late.

“Girl, why?” Ashanti saying, turning to face her friend.

“Life at the law firm has been tough recently.” Harper explained. She took the glass of champagne that Ashanti had poured for them earlier and took a sip. She sat it back down and continued. “All these big deals coming through. And you
know
I'm trying to make partner.”

“Harper, you've been trying to make partner since you
started
law school.” Ashanti said, shaking her head and laughing. “I know you'll be able to do it.”

Harper hung her head down, sighing slightly. “It's just hard. There's a glass ceiling, I think. Or at least I feel there is. Sometimes I think they're afraid of a strong woman. That I'm too aggressive or what have you.”

Ashanti sat down down to Harper and took her hand in a friendly manner. “You need to believe in yourself. Your strength is something you should be proud of, not ashamed of. I know you'll make partner. Now let's go because the chauffeur will be here any minute. And don't think I haven't noticed you sneaking all those looks at your watch. We'll get there fashionably late.”

“You know I hate being late!” Harper exclaimed.

All through her early years, her family was
always
late, and that drove Harper absolutely crazy. When she was a little girl, she'd be late for school because her mom was running behind schedule. They'd be late for church, walking in during the sermon. Once, Reverend Brown even publicly chastised her family for being so late! And then there was that time when Harper was cast as the lead in the school play. Her mother made her late to
that
too. Harper barely made it onto the stage by the time her character made her first appearance.

The worst memory of lateness Harper could remember was her college graduation. Her mother and grandmother had flown all the way in to come see her, but by the time they got to the stadium where the graduation exercise was taking place, the ceremony was
already over.

Because of that, Harper had
no
pictures of that momentous occasion. No one was there to see her graduate. Well, no one from her family. She was the first person from her family to go to college. And they couldn't even bother to show up on time.

Harper had gradually come to terms with it.
They're just not ever going to change
, she had realized. But it still irked her.

And she decided, a long time ago, that she was never going to be late like that.

Sure, it sometimes meant driving her friends a little crazy. But it also meant not being late to things like job interviews, meetings, important flights, conferences, dates.

A moment later, Ashanti's phone rang. It was the chauffeur. They made their way down to the lobby and into the limo that they had ordered for the night. There was going to be some partying tonight. And because they were responsible, they knew they weren't going to drink and drive.

“So how's work for you?” Harper said as they zoomed through the city in the back of the Maybach.

“Busy. You know how it is. Owning an interior designing company is kind of a feast or famine type of thing. You either have a lot of work or not so much. But I'm making do.”

“Well, looking at those red bottoms you got on, it looks like you’re doing pretty well.” Harper said, referring to Ashanti's Louboutins.

Ashanti laughed and ran a hand through her bra-strap length red hair that perfectly offset her gorgeous cocoa skin tone.

“I like to splurge once in awhile. After I make sure my retirement account is fully loaded. Oh, I forgot to tell you. We're picking up Trina.”

“
I
haven't seen her all week. Is she okay?” Harper asked, tilting her head to study Ashanti's expression. Although Harper and Trina were close, Trina and Ashanti were cousins and thus had a stronger bond. Trina had just gone through a very bad breakup with who she thought was the love of her life. “She hasn't returned any of my calls. Only my text to say that she was coming tonight.”

“You know Trina. She takes break-ups pretty badly.” Ashanti said, looking out the window at the skyscrapers of the city.

“I helped her through the last three break-ups. I don't know why she's trying to ignore my calls like that.”

Ashanti turned and looked at Harper. “It's not about you, Harper. She's just a mess right now, okay? Now be nice. I remember you two fighting before about something like this and we don't want to spoil Lola's party, now do we?”

Harper said nothing. She fiddled with her iPhone and took a deep breath.

“We call ourselves the Realest Divas, but when we can't support each other, then what's the point?” Harper said after a few moments. “We're supposed to lean on each other in times of need. That's the whole point of having a support system.”

Ashanti said nothing at first, but then sighed.

“You just have to let her heal in her own time. You're always trying to fix everything, Harper. That's just your personality.”

“It is not!” Harper said jokingly. But her tone was serious.

“Girl, that's why we love you. We come to you with our problems and we know you'll rationally go through them all and help us figure out what to do next.” She cocked her head and smiled. “Or just
tell
us what to do next.”

“I never told anyone to do anything, I just --”

Ashanti put her hands up.

“All I'm saying is that sometimes you just need to let people figure things out on their own. I know you're a dyed-in-the-wool attorney and your job is to fix things. But sometimes, you come across a little...”

“A little
what?
” Harper said. A deadly smile was on her face.

“A little...strong.” She said carefully. “That's might be why you're scaring men away.”

“You're very type A. That's a
good
thing. But it would be good if you just learned to relax a little. Just be chill. Just...let things be the way they are. Not try to control everything all the time.”

Harper took a deep breath. She didn't want to get in a fight with her friend so she bit her tongue. And maybe what she was hearing wasn't
that
far off from the truth.

“I don't mean to be that way.” Harper said. “It's just how I think. I want to solve problems. I want to find the solution. I want everything to be perfect.”

“A bad
girlfriend?
” Harper exclaimed. “Girl, you're about to step over that line and it's not going to be pretty when you do.”

“I'm saying this as your friend, Harper.” Ashanti said as they continued to speed through the city. “I want you to be settled and happy. We're not going to be young forever. So if you're going to find and
keep
a man, you're going to have to reflect a little on how you come across.”

“So you're telling me I should see a psychiatrist or something?”

“Not yet.” Ashanti said. “But what I'm saying is you need to think about how you can rein in some of your control freak, perfectionistic tendencies.”

Harper pursed her lips and looked out the window. She
really
wasn't in the mood to hear all this. Part of her was offended. Part of her wondered why Ashanti chose
this
moment specifically to bring this out into the open.

“Are you done?” Harper said, locking eyes with her friend.

“You know what you said kind of hurt.”

“I didn't mean to hurt you, Harper. But I felt I had to say something. Before it was too late...”

“
Too
late?” Harper said in a shocked voice. Ashanti was getting closer and closer to that line.

“We're grown, girl. You know that. We don't have much time left if want to have kids.”

Harper sighed. She hated hearing this kind of talk. She preferred to throw herself into her work and ignore the ticking of her body's clock. Her momma
and
grandmomma had always asked about when she was going to have kids. But more recently, they'd stopped asking so frequently. Maybe they'd given up. Maybe they thought it was too late.

Was
it too late?

“So let me just get this straight.” Harper said, taking a swig of her champagne. “Is your goal to just
totally
ruin this party for me?”

“My
goal..
” Ashanti said loudly. “-- is to help you get your ass in gear. To get you ready to be in a committed relationship.”

“I've been in committed relationships! I was engaged to Brian!”

“Yeah, but you broke up. Do you remember why?”

Harper bit her lip. She didn't want to say that Brian had accused her of being a perfectionistic control freak who had to have every second scheduled and planned. Harper looked down at her Chanel watch.

“We're going to be late.” She turned to look at the driver, but the partition was raised. “Tell that man to hurry his slow ass up!”

Ashanti started to talk but hesitated. She felt she had given Harper enough to think about for right now.

Ten minutes later, they pulled up in front of Trina's large mansion that was in a suburb right outside the city. Moments later, they saw Trina – long honey blonde weave in cascading waves flowing about her cherubic face – walking down the sidewalk. The chauffeur opened the door for her and she got in.

“Hey girls.” She said. Her voice sounded sad. Her face had a wane expression. Like she had just finished crying. “Sorry I've been missing in action. Just this break-up with Ashton really threw me for a loop. I didn't see it coming.”

“I was just telling 'Shanti that I was a little offended that you didn't reach out to me.” Harper said. She crossed her arms and gave Trina a humorous yet reproachful look, raising her eyebrow at her.